#AbolishICE is trending on Twitter. Popular tweets on #AbolishICE.

@RashidaTlaib
ICE is literally removing immigrant women’s wombs. This makes me sick to my stomach. ICE is an agency rotten to the core. That’s why #AbolishICE is a human rights, reproductive justice, & public health imperative. We can't be silent. We must stop this. https://t.co/PDd57eoumt
15 Sep, 01:32 AM UTC

Savvy☭🎃
@sleepisocialist
#AbolishICE isnt radical. This is a bare minimum position to have if you care about human life.
14 Sep, 10:43 PM UTC

Alexa
@_Alexa_Bee
Don’t mince words; this is a genocide. This needs to be shut down and prosecuted. One more of many reasons to #AbolishICE Whistleblower: There Were Mass Hysterectomies at ICE Facility | Law & Crime https://t.co/yaMLqR0Mw8
14 Sep, 07:33 PM UTC

Dana von SENTIENT BITMOJI DUMPSTER FIRE 🗽🌷
@danapaige23
PSA to men - it’s ok to talk about brown women’s uteruses being collected, in fact we’d appreciate it if you were SICK AND LIVID about it too. This is not just a women’s rights issue. This is against the UN genocide convention Article II Clause (d) and (e). #AbolishICE
14 Sep, 07:59 PM UTC

@UNITEDWEDREAM
Immigrant rights ARE reproductive justice. ICE is forcefully sterilizing immigrant women in their detention camps while letting COVID-19 run rampant in their facilities. The terror and mutilation must end NOW. We must #AbolishICE! https://t.co/fHl98y1PUg
14 Sep, 08:31 PM UTC

@ShahidForChange
Is anyone still willing to claim these are *not* concentration camps? Forced sterilization has a long, racist, and unacceptable history. We must #AbolishICE and CBP. https://t.co/umTjjnK6wK
14 Sep, 07:47 PM UTC

@AWKWORDrap
I’m a Jew. Comparing contemporary occurrences to concentration camps is dangerous. And that’s what these are. https://t.co/2rTtK8hb7n Never Again Is Now. #AbolishICE, end immigration detention, and mandate legal immigration status priority to ICE detainees and their families. 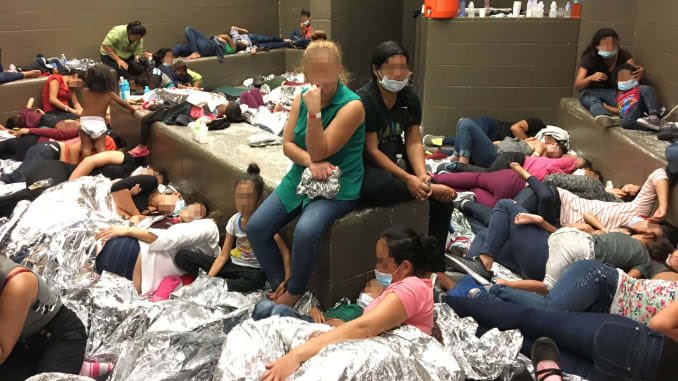 @MsPackyetti
I hope in our righteous horror about the mass forced hysterectomies & sterilization happening in ICE facilities, that we listen closely to the disabled, Indigenous, Black & Immigrant women who have been reporting this same abuse for generations & were met w silence. #AbolishICE
15 Sep, 12:46 PM UTC

@BrianSimsPA
GENOCIDE: If true, this will be among the most heinous violations of International Human Rights law by the Trump White House. America’s history of forced sterilization of indigenous populations, racial & ethnic minorities, & criminalized populations must be STOPPED. #AbolishICE https://t.co/Oof9rNrea6
14 Sep, 11:04 PM UTC

Tamburlaine #AbolishICE
@tamburlaine01
Will mass hysterectomies be the final straw against ICE detention centers? Or will we be pissed for a few days and forget about it for a few months, like we have before. I feel hopeless about it. What can we do? #AbolishICE
15 Sep, 06:22 AM UTC

Oskaer 🧬
@Oskaer__13
Nazi Germany is trending is trending because America’s genocidal history has been completely memory-holed under exceptionalism and the only reference Americans have is the Nazis like the Nazis didn’t actually have a hard-on for American laws. #AbolishICE
14 Sep, 10:39 PM UTC

@MsPackyetti
Also a reminder: ICE is only 17 years old. It wouldn’t need to exist even if it was 217 years old. Still, we should remember that dismantling it is not nearly the impossible charge folks want to say it is. #AbolishICE
15 Sep, 12:50 PM UTC

kim 😷
@4_the_babies
They are not giving vasectomies (which are reversible) to men, they are removing organs from woman so they can never reproduce. This is Miller and trump trying to wipe out a race, using tax-payer money. #AbolishICE
14 Sep, 09:40 PM UTC

♣Mαχιмυs🔥Dєρlσrαвιlιs♥
@Maximus_4EVR
I'm 100% Latino and 1000% for Trump. Make sure to report suspected illegal immigrants to @ICEgov 1-866-347-2423 where they can be investigated. Only if we work together, can we prevent international child exploration and human trafficking. #AbolishICE? Nah. #MAGA! https://t.co/a93ZPVJ4wO
15 Sep, 12:15 AM UTC

🌹 DSA-LSC 🏴
@dsa_lsc
The reason to demand we #abolishICE is not that it’s the coolest, most radical position around. It’s that @ICEgov is a fascist institution. And they just proved it. First, concentration camps. Now, forcibly sterilizing migrant women. What comes next? https://t.co/LbudBFoLIG
15 Sep, 01:03 PM UTC

the black mommy activist
@kayewhitehead
ICE is removing immigrant women’s wombs We canNOT look away We canNOT act as if doesn’t concern us We canNOT let this stand #AbolishICE is a human rights issue a reproductive justice issue And in this new world order, a public health imperative https://t.co/p4ZjYWybCm 1/2
15 Sep, 03:48 AM UTC

Adrienne - AdzCa
@activistadzca
Where are these pro-lifers? Shouldn't they be mad that women are undergoing nonconsensual hysterectomies? I thought the womb was sacred? Or does it only spark outrage when it's a white person? Or someone trying to get an abortion? #abolishICE #reproductivejustice
15 Sep, 06:37 AM UTC

Julia Keefe
@Julia_Keefe
Remember that one time, in Nazi Germany... oh no wait, this is happening in the US. Cool. (PS the US forced sterilization on Indigenous women back in the 70s too. This is more white supremacy in action). #AbolishICE #CrimesAgainstHumanity https://t.co/UsQpVHxWsI
15 Sep, 01:27 PM UTC