Ron Filipkowski 🇺🇦
@RonFilipkowski
Trump endorsed congressional candidate JR Majewski today says that the reason why there is no record of him serving in combat in Afghanistan in his service record is because it is “classified.” 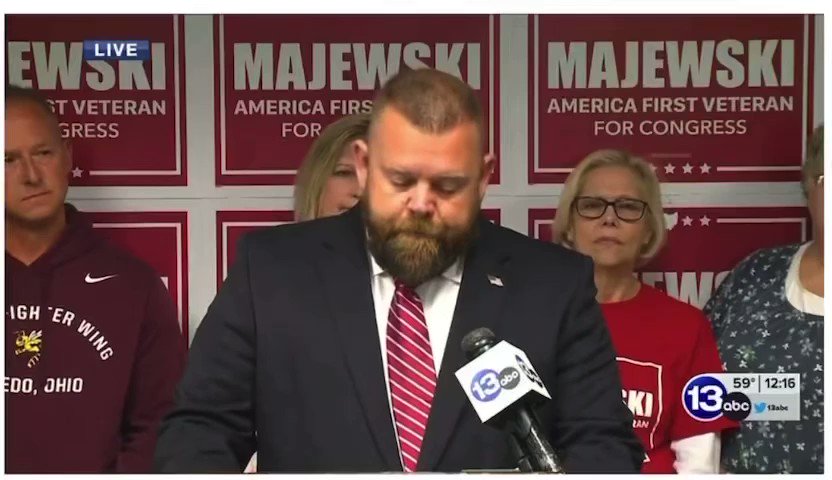 @MeidasTouch
A Navy Veteran just blasted MAGA Republican House candidate J.R. Majewski for lying about being a combat veteran who served in Afghanistan with the perfect takedown. Have a watch. https://t.co/6X2dNaAyHo
23 Sep, 01:46 AM UTC

Ron Filipkowski 🇺🇦
@RonFilipkowski
Guy at Trump rally says it “baffles his mind” that Biden hasn’t been impeached for Afghanistan for “not helping our troops who are still over there today.” https://t.co/gtAm9S4b1W
23 Sep, 05:26 PM UTC

@RepSwalwell
Did you serve in Afghanistan as you claimed or are you a liar? #StolenValor https://t.co/ntNfVMqUYE
23 Sep, 04:15 PM UTC

@FPWellman
@TomPorterDC That word “misled” is getting a workout. He literally said he missed his grandmothers funeral because “they couldn’t find him in the desert in Afghanistan.” He was an Air Force passenger loader in Qatar. He lied repeatedly.
23 Sep, 12:24 PM UTC

ResponsibleDispatchHat
@Popehat
I can confirm Majewski was in Afghanistan on a secret classified mission, I met him when I was there hiding from the supermodels who are always hitting on me https://t.co/3GOo9swZaU
23 Sep, 07:56 PM UTC

@votevets
The only fake news is you, @JRMajewski. You never served in Afghanistan. You lied. You got called out. Now, dude, just drop out. #OH09 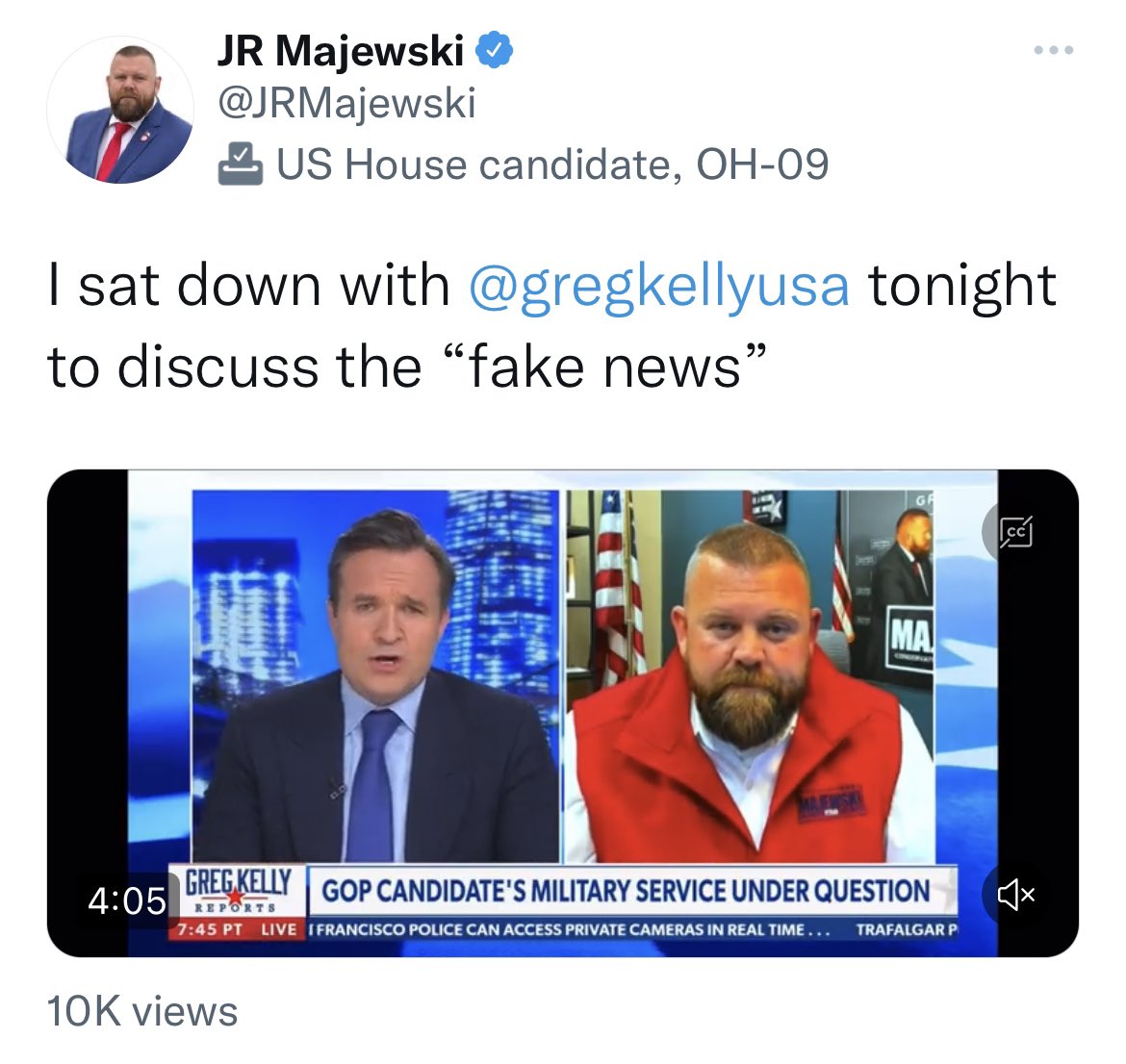 Anonymous
@YourAnonCentral
From a woman in #Afghanistan to the people of #Iran: "I am amazed by the brave men of your society who stood by your side to claim your rights ... Continue fighting, stronger and more powerful, you are very close to victory." #AfghanWomen #Mahsa_Amini #مهسا_امینی #IranProtests https://t.co/0q2Okk0xui
23 Sep, 06:15 PM UTC

@joncoopertweets
MAGA Republican candidate J.R. Majewski LIED about his military service, claiming he was deployed to Afghanistan after 9/11 when in reality he spent 6 months loading planes at an air base in Qatar. In response, the House GOP’s campaign apparatus PULLED $1 million in support ads.
23 Sep, 06:06 PM UTC

@FPWellman
For those playing at home @JRMajewski is desperately digging through his basement to find papers to throw at the wall to “prove” he was a top secret combat operator and not just a regular dude who never set foot in Afghanistan. It’s the lies, JR not the service.
23 Sep, 07:28 PM UTC

@ClareDalyMEP
Scandalous! @MichealMartinTD supposed leader of neutral country behaving as #NATO stooge when he should be championing peace & end to the war. Where was his call for US, UK & France to lose their seats for Afghanistan, Iraq, Libya, Yemen, Syria? Pathetic! https://t.co/3yrPSgLvke
23 Sep, 06:35 PM UTC

@VoteJackie4NY
I served my country in Iraq and Afghanistan, and I led platoons during Desert Storm. Lindsey Graham and Congressional Republicans don't intimidate me. I will always vote to support a woman's right to make decisions about her own body.
23 Sep, 01:12 PM UTC

@RubenGallego
Hi @JRMajewski can you just find one person that will say they served with you in Afghanistan? You seemed so happy to talk about it on your podcast. https://t.co/bX94WAsa1G
23 Sep, 02:22 AM UTC

Angie
@AngAlex2432
@RonFilipkowski If this were true Trump would have done a peaceful transfer of power and held transition meetings with Biden administration that could have made everything smoother, eg, Afghanistan departure plan.
23 Sep, 02:41 AM UTC

1stRepublic14thStar
@1Republic14Star
@therecount The deployments of an Airman E-2, second lowest enlisted rank, aren't classified. And if they were, his awards wouldn't be. But his DD 214 lists no Afghanistan Campaign Medal or Global War on Terrorism Expeditionary Medal. Conclusion: Majewski didn't serve in Afghanistan. Ever.
23 Sep, 05:17 PM UTC

@therecount
GOP congressional candidate J.R. Majewski, who the AP reported misrepresented his service in Afghanistan, attacks the reporting as an effort to “crush me and defame me,” saying he cannot provide evidence of his deployments: “All of my deployments are listed as classified.” 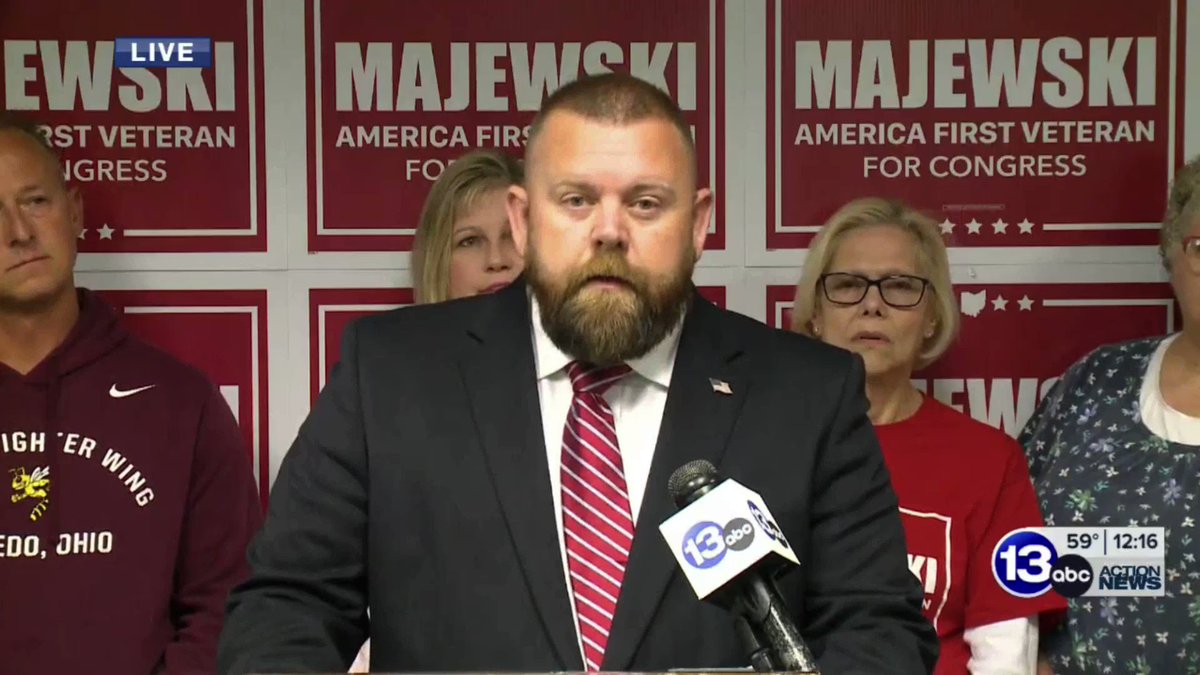 @wallacemick
Why did @MichealMartinTD support the illegal #US Invasions of #Afghanistan and #Iraq that destroyed the lives of millions? Why was he silent about a million civilians killed in Iraq? Why did he support the destruction of #Libya ? Why is he silent about the Genocide in #Yemen ...? https://t.co/TekZXKyt19
23 Sep, 10:01 PM UTC

Sayed Abdullah
@Dragonvibee
A 4-year-old Afghan girl sleeps after completing work in a brick factory in Afghanistan. This is what the HR defender, US admin has been deliberately doing to afghan kids. Afghans have been suffering even for basic necessities under brutal sanctions of US. 📷: Ibrahem noor + https://t.co/lehcJopy4T
23 Sep, 01:39 PM UTC

🐕DogDallas68🌊🐾
@DDallas68
@JRMajewski Hmm..Checked my globe AGAIN to be sure,Qatar & Korea (south) are still not called Afghanistan. But here's the kicker JR, my DD214 list my deployments to the Persian Gulf. General deployment information is not considered classified after US Dept. Of Defense releases it.🖕U douch
23 Sep, 06:27 PM UTC

Black in the Empire
@blackintheempir
We don't have to go back decades folks They just ended a war where they spent 20 years lying to us about what was happening in Afghanistan and spending over a trillion dollars of our money doing it. What's wrong with you people?
23 Sep, 11:18 PM UTC 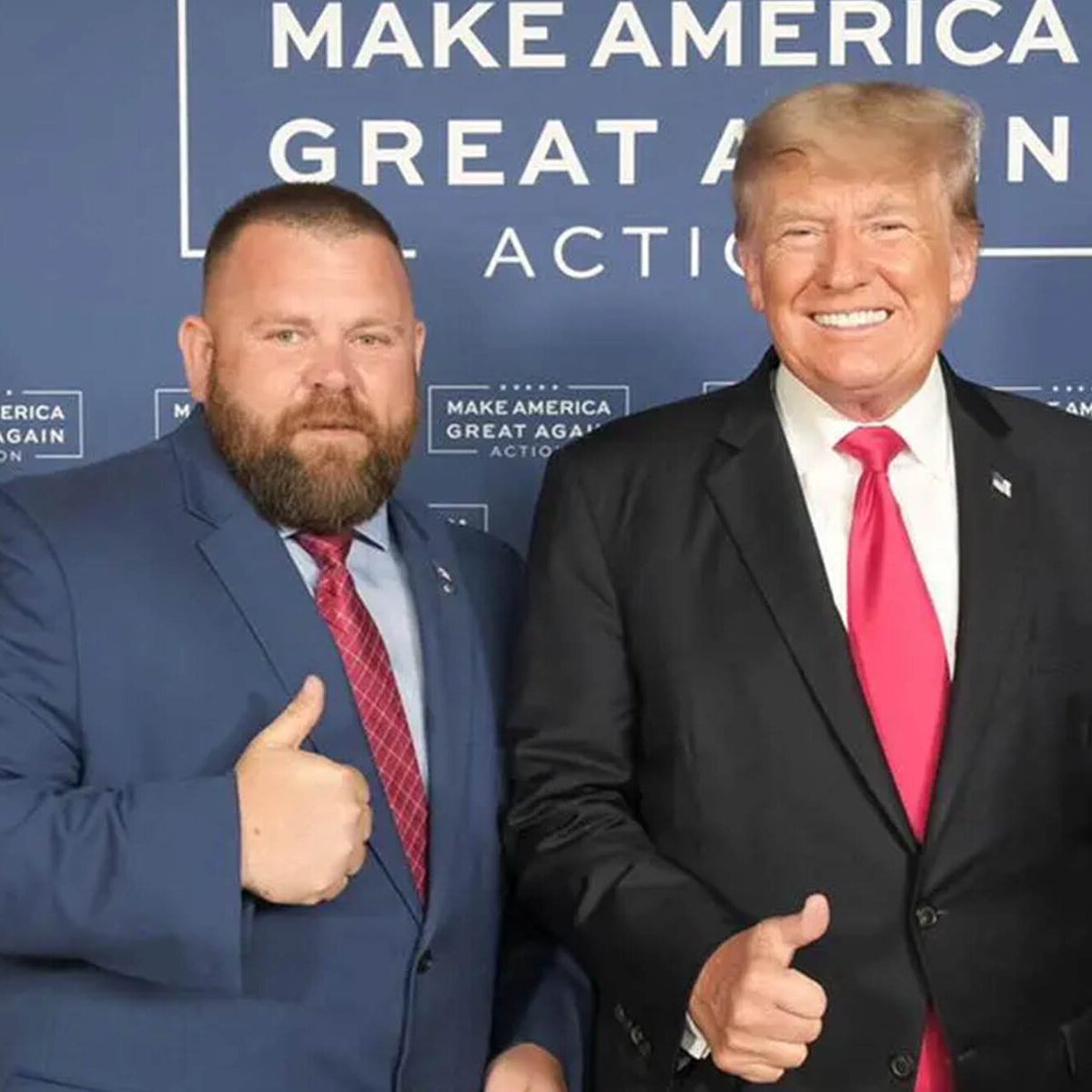 Ramona Jordan
@ramonajordan423
@RonFilipkowski He was an E-2 after 4 years of service. His record also indicates he would not be allowed to reenlist. Classified, my behind. https://t.co/aZl79bscre
23 Sep, 06:31 PM UTC 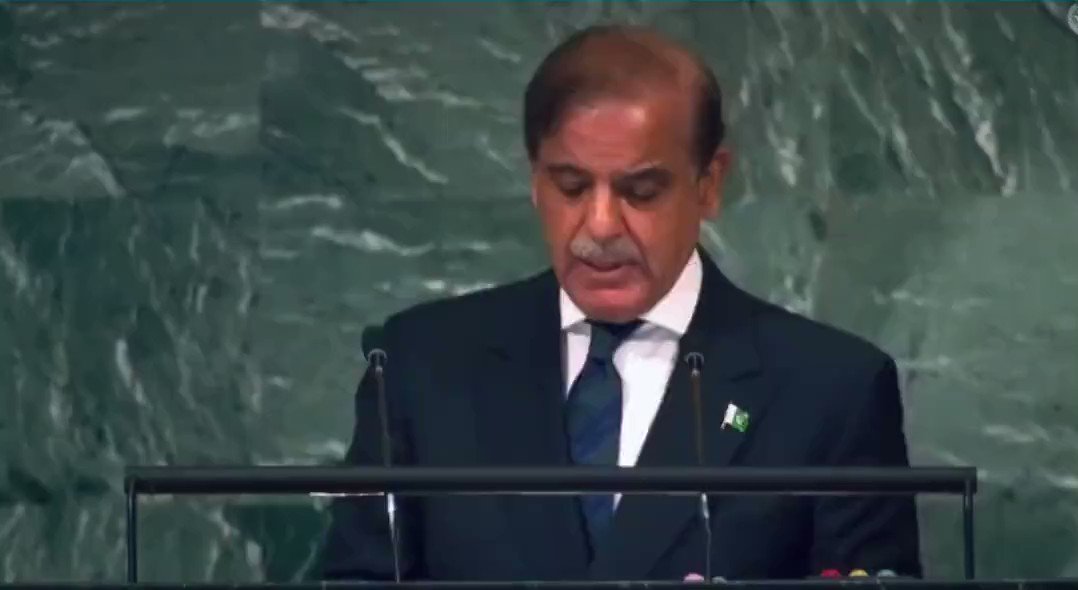 @MatthewPHoh
While Afghanistan is trending because Republican J.R. Majewski lied about his military service, it's a good time for a reminder that the US stole $7 Billion from Afghanistan and caused mass hunger among innocent Afghan people we supposedly wanted to help. https://t.co/TDQp098Pjf
23 Sep, 10:50 PM UTC

Pé🌻
@4everNeverTrump
@JRMajewski So are you saying you've been boasting about a classified operation to Afghanistan… including providing the date of that operation?
23 Sep, 11:51 PM UTC