@Yamiche
DHS Sec nominee Alejandro Mayorkas: "I don't drive to be a govt servant & serve the American public to cut ribbons around the country & have fun. I work really hard & I have worked really, really hard throughout my nearly 20 years of govt service to bring honor to the office."
19 Jan, 03:44 PM UTC

@CBSNews
DHS nominee Alejandro Mayorkas references the Capitol riot while swearing to protect the nation against threats: "The terror that you felt — your colleagues, staff and everyone present — will not happen again" Watch his full opening statement: https://t.co/apY3BP9QWd 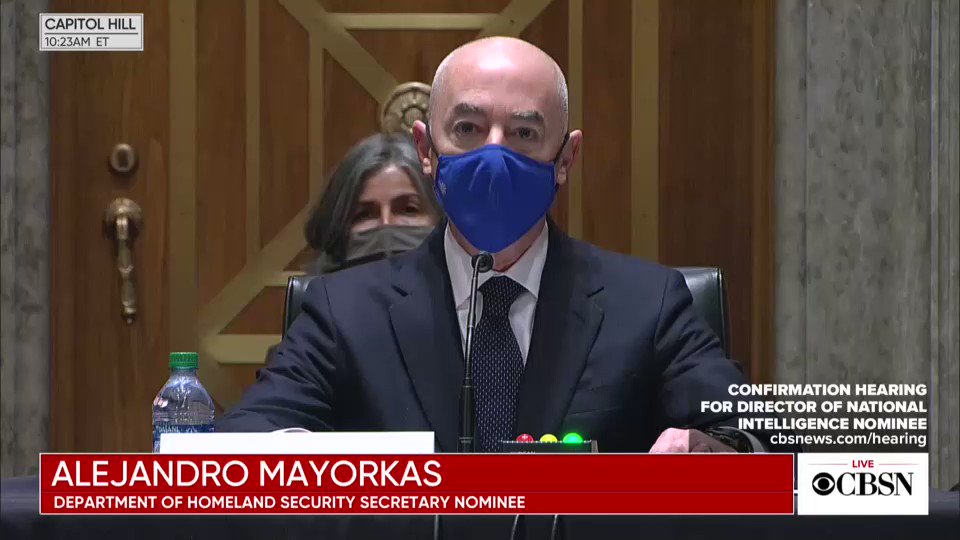 @CNNPolitics
"My father and mother brought me to this country to escape communism and to provide me with the security, opportunity, and pride that American citizenship brings to each of us" Read excerpts from Biden's DHS pick Alejandro Mayorkas' opening statement: https://t.co/efifcoTsyf
19 Jan, 03:14 PM UTC

@CBSNews
"We are a nation of immigrants, and we are also a nation of laws": DHS nominee Alejandro Mayorkas tells Sen. Mitt Romney that when migrant caravans arrive at U.S. border, people will be screened one-by-one to see if they qualify for humanitarian relief https://t.co/apY3BP9QWd 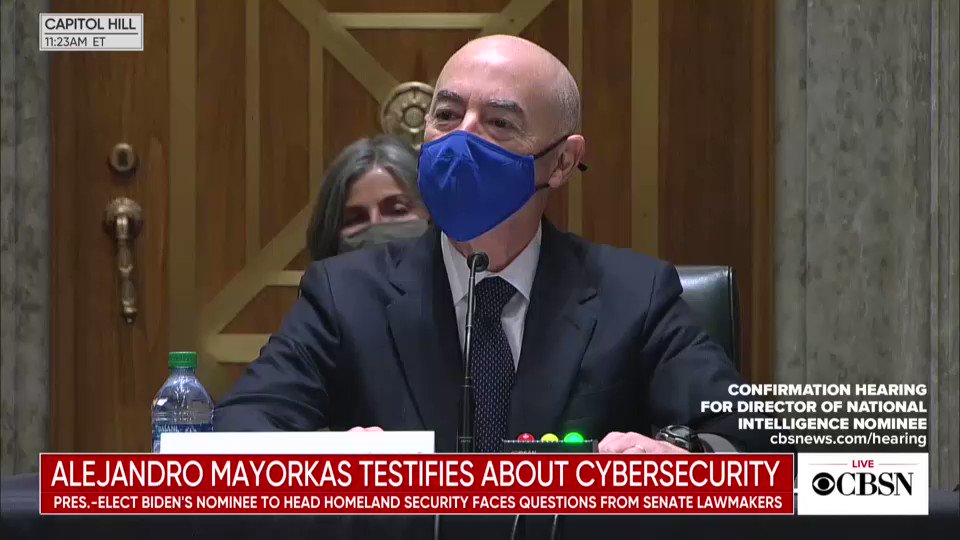 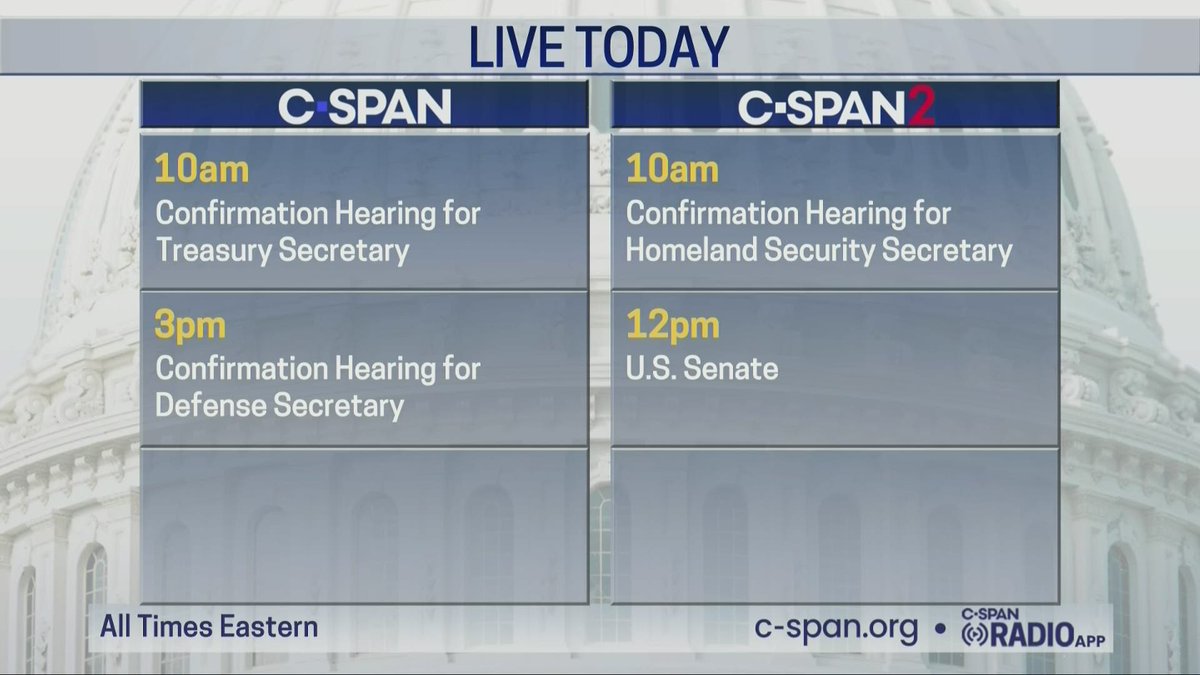 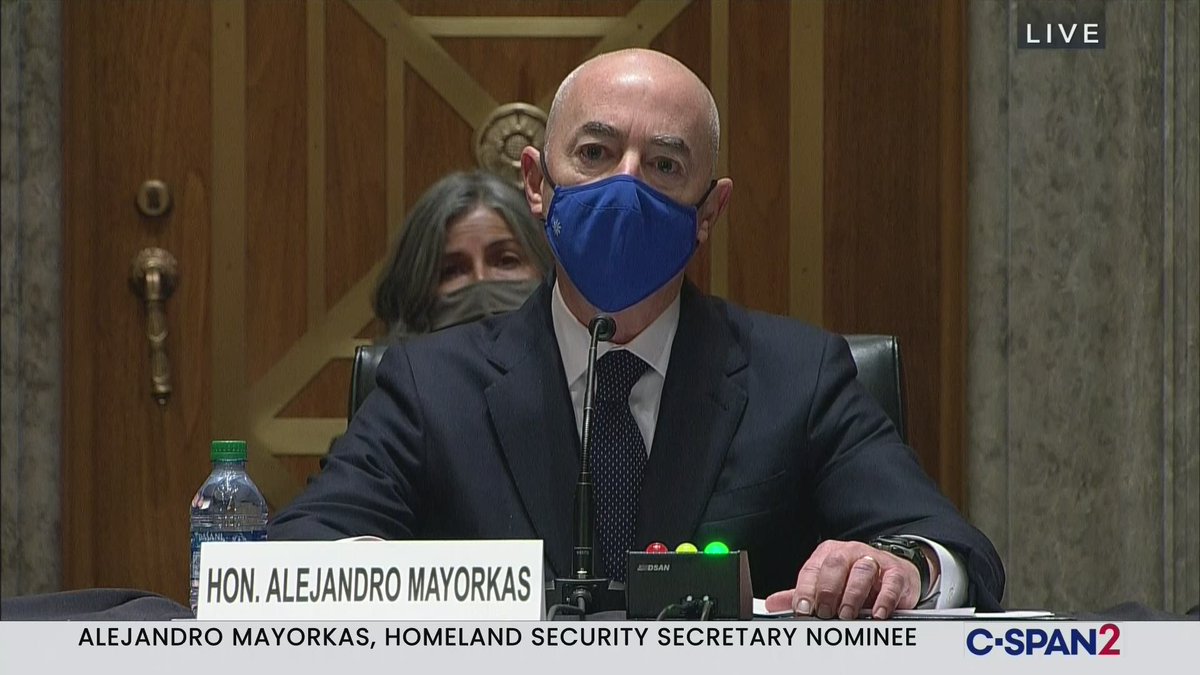 WomenForBidenHarris
@Women4Biden
President-elect Joe Biden’s nominee to lead the Dept. of Homeland Security will pledge on Tues. to do everything in his power to prevent attacks like the one that targeted the Capitol earlier this month, according to prepared remarks obtained by POLITICO. https://t.co/y4UZb0RzGi
19 Jan, 04:20 PM UTC

@CBSNews
DHS nominee Alejandro Mayorkas says he does not recommend defunding ICE, and he will "study" if the agency needs additional resources https://t.co/apY3BP9QWd 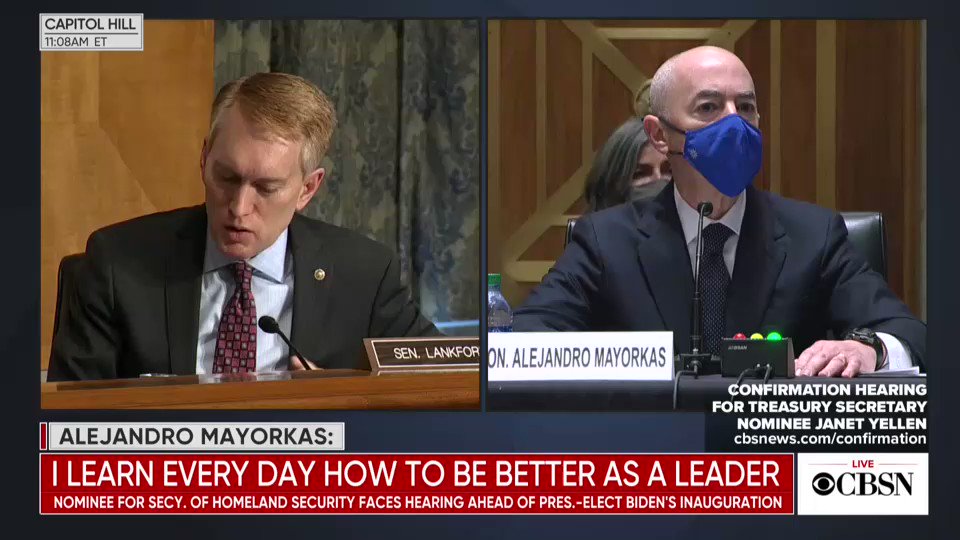 @AdamShawNY
NEW: Biden's pick for DHS, Alejandro Mayorkas, was just asked if he would recommend @ICEgov be defunded. "No," he says.
19 Jan, 04:13 PM UTC

@ssavett
Since Senator Johnson is bringing up family separations at the border, a reminder that Ali Mayorkas explicitly rejected that proposal when he was Deputy Secretary of DHS https://t.co/bZ9ltemv9I
19 Jan, 03:56 PM UTC

@camiloreports
Alejandro Mayorkas, President-elect Joe Biden’s pick to lead DHS, says ICE should not be defunded during his confirmation hearing. He does not answer whether he would support the construction of additional physical barriers along the US-Mexico border.
19 Jan, 04:13 PM UTC 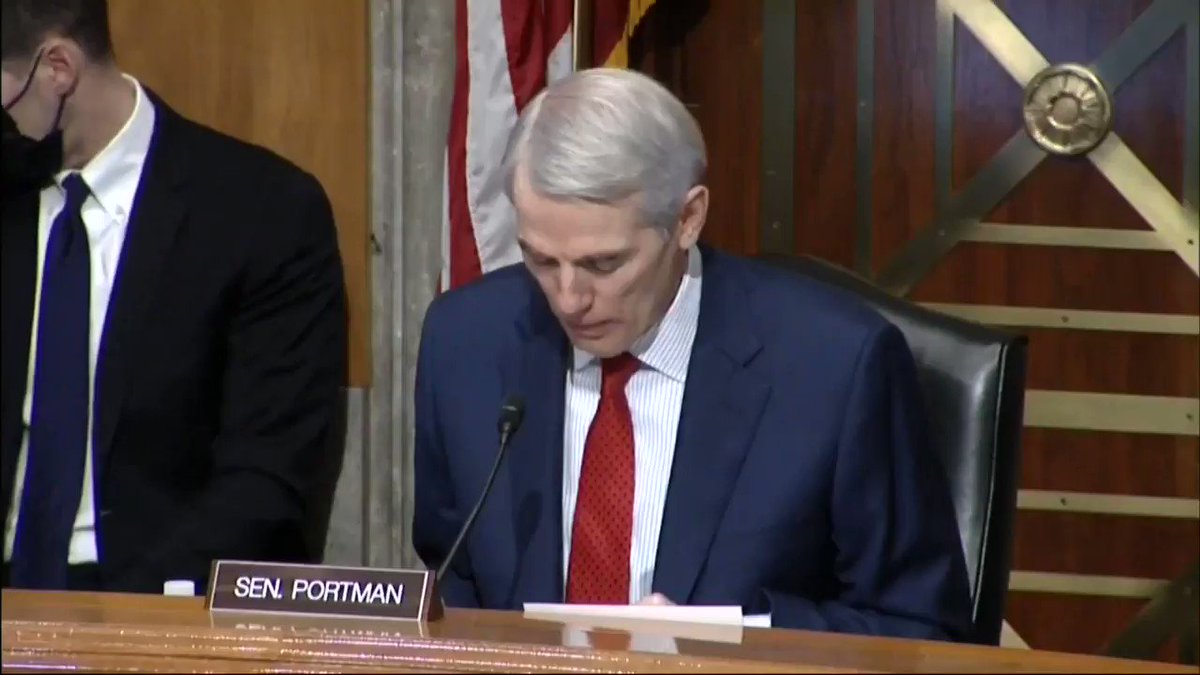 Al Cardenas
@AlCardenasFL_DC
Great bipartisan support for the nation’s 1st cuban american secretary of DHS. We should all be proud -specially if you are of cuban american origin 4 former homeland security secretaries: We cannot afford one more day without a confirmed DHS leader https://t.co/XRrmS8d1xK
19 Jan, 03:16 PM UTC

💥Tiff💥
@tify330
Alejandro Mayorkas is doing very well at his hearing. Republicans on the Homeland Security committee want to talk about migrant CARAVANS because you know racism..they are obsessed with immigration but will then try to block Pres. Biden’s immigration plan. Go figure!
19 Jan, 05:03 PM UTC

Yael Schacher
@YaelSchacher
Mayorkas hearing. Sen. Johnson is falsely claiming DACA created a surge at the border and showing his "charts". This guy is spewing hatred and falsehood and needs to STAND DOWN. https://t.co/7ONtds19cv
19 Jan, 03:52 PM UTC

@HIASrefugees
"If confirmed, @AliMayorkas would become the chief enforcer of a U.S. immigration system that provided refuge to his own family 6 decades earlier." https://t.co/kWlY32XJt1
19 Jan, 05:01 PM UTC

@RNCResearch
Democrat Sen. Tom Carper claims DHS Sec. nominee Alejandro Mayorkas "creating an appearance of favoritism” is fine because everyone in DC does it https://t.co/O7rEIRFNqC 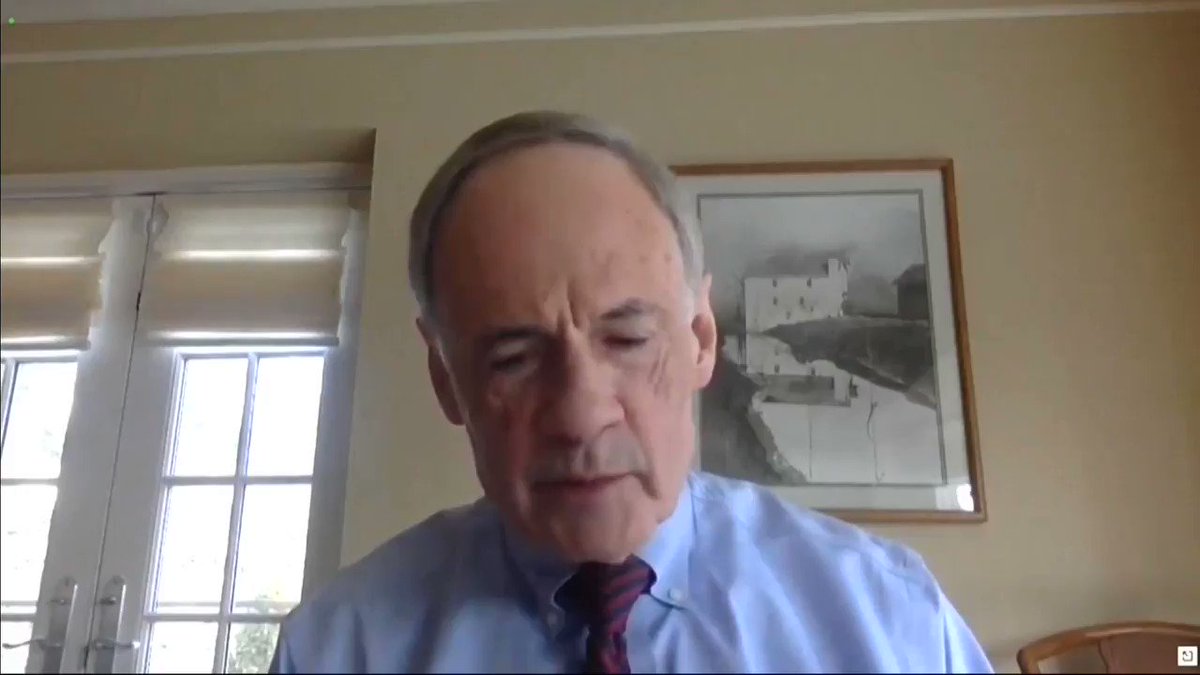 @CrisAlexJimenez
First Latino & immigrant DHS nominee, Mayorkas in his confirmation hearing today: "The love for this country that I learned from my parents made the January 6 attack on the Capitol all the more horrifying." https://t.co/CBAWC5zys2
19 Jan, 05:12 PM UTC

@Heritage_Action
Let's be clear: If Alejandro Mayorkas is confirmed as the head of the Department of Homeland Security, he will implement amnesty for millions of illegal aliens. A vote to confirm Mayorkas is a vote for amnesty and to encourage millions more to come here illegally. https://t.co/BV23j8vF7I
19 Jan, 05:01 PM UTC