@AliVelshi
My parents grew up in South Africa, where my father and forefathers fought the injustice of the racist apartheid regime from the wrong side of the law. Because of the color of their skin, they couldn’t vote, let alone run for office. https://t.co/ODCH62njyp #velshi
24 Oct, 06:45 PM UTC

@MSNBC
“The auto industry could’ve disappeared in America, but it was President Obama and Vice President Biden that stepped up,” Sen. Gary Peters says about Michigan’s auto industry during the last recession. https://t.co/qnOD1FE8gK
25 Oct, 12:32 AM UTC

@atrupar
Trump fans chant "CNN sucks," prompting Trump to rail against MSNBC staffer Ali Velshi. He then gloats over Velshi getting hit by a rubber bullet in Minneapolis. 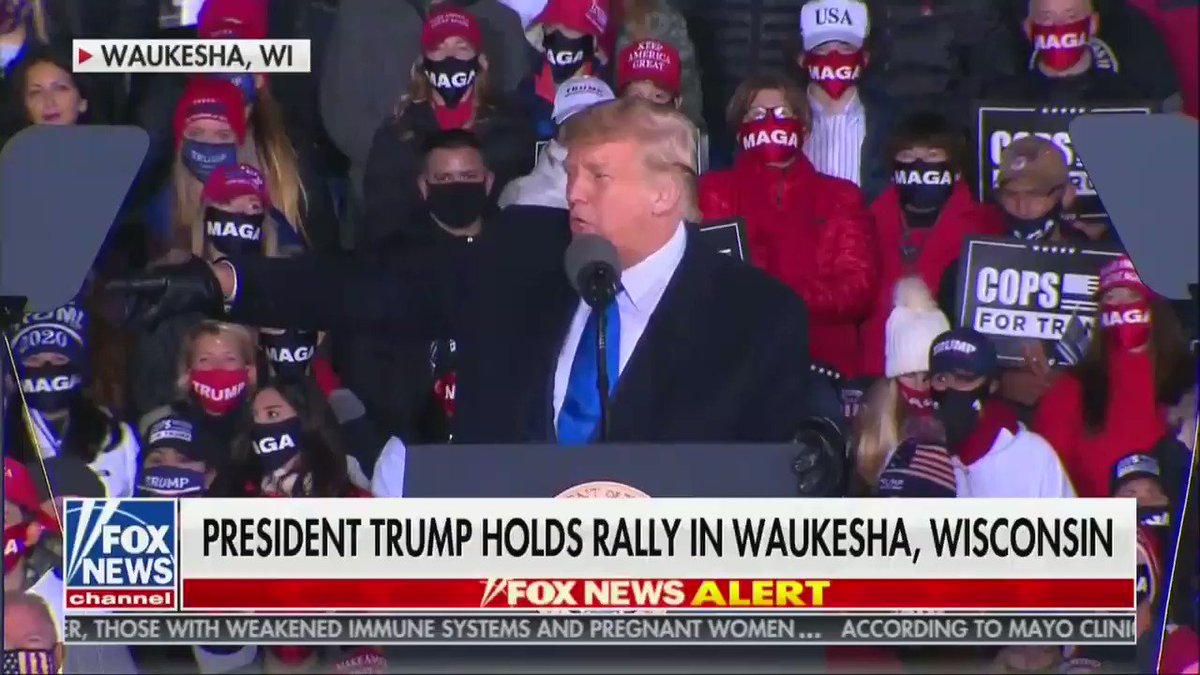 @MSNBC
“We feel that no American citizen should be forced to choose between putting food on their table or voting. That access to the ballot box should be unencumbered and free,” Desmond Meade says about former Florida felons' fight for voting rights. https://t.co/VDaXxeQC46
25 Oct, 05:25 AM UTC

@MSNBC
“Maybe it made sense in the 18th century when this was first set up, but I think we really have to come out of the horse and buggy age,” FEC Commissioner Ellen Weintraub says about America’s election system. https://t.co/9gSDhxO6pY
24 Oct, 11:16 PM UTC

Richard Glass
@ToSayBoldly
@atrupar Ali Velshi was correct. BLM and Antifa were peaceful in Minneapolis. It was the Boogaloo Bois who were instigating the violence. https://t.co/TkXU6Iv5vJ
25 Oct, 02:20 AM UTC

Annie Gabston-Howell- #IVoted
@AnnieGabstonH
Ali Velshi just gave the president an epic set-down. He used a lot of respectful sounding words to say it, but it translates to: "Grow the hell up, idiot, people are dying and it's not a suitable topic for jokes at your super-spreader rallies." Love the Kenyan born immigrant!
25 Oct, 01:31 PM UTC

Mayday Mindy🌊
@maydaymindy9
I love that Ali Velshi just called trump out for making pretend he didn’t know who Ali is when trump uses Ali in his super spreader rallies for a laugh #velshi
25 Oct, 01:28 PM UTC

A Texan in Kentucky🏳️‍🌈Fight for nation's soul
@JeffRussell10
#VelshiAcrossAmerica has been publicly mocked by Trump at a rally. NOW you know Ali Velshi is a truth-teller. Get up early on the weekend and watch him on #MSNBCLive
25 Oct, 01:33 PM UTC

Lane
@Lane_
Ali Velshi is doing his show from the Grove Park Inn in Asheville and now I physically hurt from wanting to go on vacation.
25 Oct, 01:53 PM UTC

BlondeMenom
@BlondeMenom
@The_AshB Ali Velshi just did a segment from Asheville, including an interview with the mayor. A sea of blue in an ocean of red. ❤️
25 Oct, 01:59 PM UTC

Donna Marie
@DmJ43
@AliVelshi BAM, telling The Pres how the cow ate the cabbage. We love you, Ali Velshi! (Spelled out your name for The Pres, just in case) https://t.co/upgu16RGda
25 Oct, 01:49 PM UTC

Dancer
@dancer39532
At his COVID 19 Super Spreader hate rally in Waukesha, WI, Trump smiled while his idiots chanted ‘CNN sucks’, so he bished about MSNBC reporter Ali Velshi to gloat over the fact that Velshi had been hit by rubber bullets from his STORM TROOPERS at a protest in MN
25 Oct, 01:57 PM UTC

Jazmin
@Jaz_Barton
Ali Velshi talking to voters in Asheville, NC. The people on supporting the Grifter-in-Chief know his lines about covid going away or not being serious are BS, but they are just double talking around his BS, one going so far as to pretend he supports masks. The level of delusion
25 Oct, 01:56 PM UTC

vaculb
@vaculb
Ali Velshi is one of the best commentators on MSNBC. He should have a daily show again.
25 Oct, 01:51 PM UTC

Katherine Slocombe
@kpslocombe
“You have 10 days left to be democracy in action” Velshi: My father’s story taught me that voting is personal https://t.co/LVnAlZTdAd via @msnbc
25 Oct, 01:45 PM UTC