Alito is trending on Twitter. Popular tweets on Alito.

@AdamSerwer
Here is my response to Alito, who demands to be seen as apolitical while acting politically, who demands civil discourse while he smears his critics, and who describes the press as sensational for rejecting his mischaracterizations of verifiable facts. https://t.co/e0zkTwL4pm
12 Oct, 06:03 PM UTC

@mjs_DC
A thorough and devastating retort to Justice Alito from @AdamSerwer. Read the whole thing. https://t.co/75a0WRbmoD 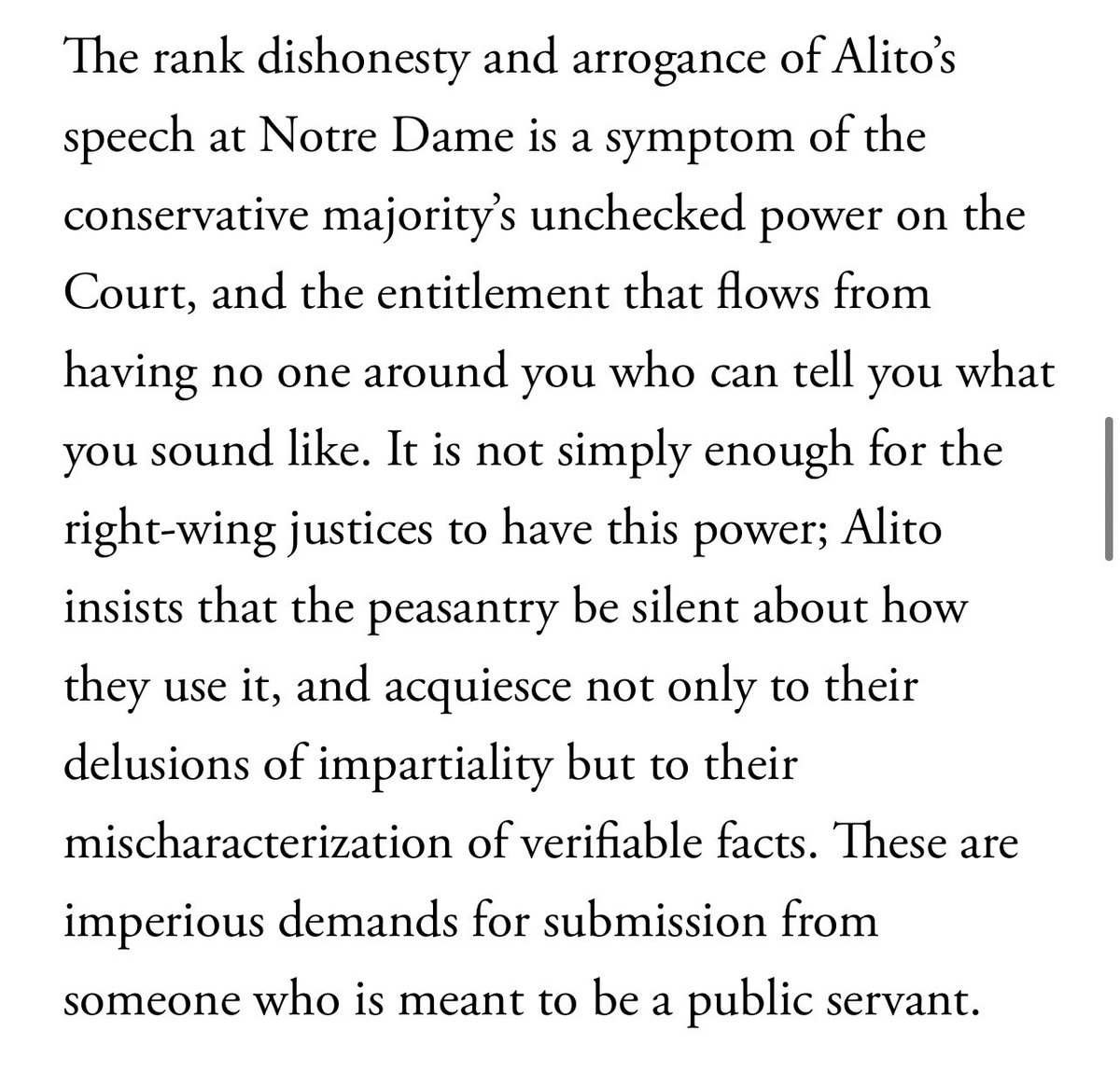 Duty To Warn 🔉
@duty2warn
Samuel Alito said, “The Court is not “a dangerous cabal” that is “deciding important issues in a novel, secretive, improper way, in the middle of the night, hidden from public view.” But that’s EXACTLY what the Federalist Society Supreme Court is.
13 Oct, 11:47 AM UTC

@AoDespair
This reply to an incredibly simplistic and injudicious speech by a Supreme Court Justice is no delicate critique. It is a comprehensive vivisection. Intellectually, Alito is now down to spare parts. https://t.co/VEjZRJKG3K
13 Oct, 12:40 AM UTC

@chrisgeidner
Adam’s piece is excellent. Alito has made it clear—on the bench, in his opinions, & in his speeches—that he is a political actor. A justice cannot use the robe as a shield from even ~discussions~ about accountability by those who seek to address a judge or court’s political acts. https://t.co/6w4gqPhVhR
13 Oct, 12:44 AM UTC

@chrislhayes
“I have had more honest interlocutors on Twitter, people whose handles were puns on bodily secretions.” https://t.co/pDkjRPIPSu
13 Oct, 11:37 AM UTC

Duty To Warn 🔉
@duty2warn
“Alito epitomizes new imperious attitude of the Court’s right-wing majority, which wants to act politically without being seen as political, and expects the public to silently acquiesce to its every directive without scrutiny, criticism, or protest.” https://t.co/KrRPVjUdiD
13 Oct, 11:23 AM UTC

Duty To Warn 🔉
@duty2warn
“If Alito wants the public to see the Court as apolitical, he should try meeting that standard, instead of lecturing others for not blinding themselves to the obvious.”
13 Oct, 11:30 AM UTC

Molly Farrell
@Marymol
@AdamSerwer Justice Alito would have been well served by invoking that historical right of SCOTUS justices: silence. To opine that Roe was not infringed by the Texas law when the basis for Roe was a woman’s right to privacy is incredible. The Texas law removes the right to privacy 1/2
13 Oct, 01:02 AM UTC

@abgutman
.@AdamSerwer brought so much intellectual 🔥🔥🔥 to his response to Justice Alito that it almost feels like he’s punching down. https://t.co/knVJSkD1Lz
12 Oct, 09:28 PM UTC

Duty To Warn 🔉
@duty2warn
“It is not simply enough for the right-wing justices to have this power; Alito insists that the peasantry be silent about how they use it, and acquiesce not only to their delusions of impartiality but to their mischaracterization of verifiable facts.”
13 Oct, 11:28 AM UTC

@AuthorKimberley
Justices serve the country. They are not above criticism. Alito is abusing his power. https://t.co/UPgo2mrIrk
13 Oct, 03:32 AM UTC

#JoyfulBeTheJourney🌹 💉💉Get Vaxd‼️
@tonirtx
@AoDespair @SethAbramson Powerful article by @AdamSerwer 🎉 “It is not simply enough for the right-wing justices to have this power; Alito insists that the peasantry be silent about how they use it,... These are imperious demands for submission from someone who is meant to be a public servant.” 💥BOOM🎯
13 Oct, 06:57 AM UTC

@PeteSouza
YOWZA. "It is not simply enough for the right-wing justices to have this power; Alito insists that the peasantry be silent about how they use it, and acquiesce to their delusions of impartiality," @AdamSerwer writes: https://t.co/jDa7wolKxS
13 Oct, 02:19 PM UTC

@chrisgeidner
And, yes, I think all of the justices are political actors in one way or another. My tweet is about Alito specifically, bc he is the topic of the essay and the one who complained — in list form! — about even the most basic accountability questions being directed toward SCOTUS.
13 Oct, 12:56 AM UTC

@Taniel
“It is not simply enough for the right to have this power; Alito insists that the peasantry be silent about how they use it, and acquiesce not only to their delusions of impartiality but to their mischaracterization of verifiable facts.” @AdamSerwer gold: https://t.co/BynEvP6L24
13 Oct, 01:43 PM UTC

Gary Andover
@andover_gary
The wingnuts on the SC let stand a clearly unconstitutional law with a never before seen nonsensical enforcement mechanism without even making Texas present oral arguments but they don't want to be criticized for it. https://t.co/Aa26sSdKBw
12 Oct, 09:22 PM UTC

@chrisgeidner
Here was my thread about Alito’s speech, which doesn’t cover it all because I was on the train and missed some of it, but it does hit at some of relevant issues: https://t.co/yFgSppH8AK
13 Oct, 01:17 AM UTC

DB
@DDBilsky
@AoDespair Perfect summation of the textualists' sophistry: "it is one thing to pursue impartiality or objectivity in good faith, and another to use those concepts in the defense of ideologically motivated conclusions. Alito’s approach to the law...is an example of the latter."
13 Oct, 01:07 AM UTC

Mike Broderick 33 ♿
@MikeBroderick33
@AoDespair If Justice Alito were truly concerned about being viewed as partisan, he'd ask the Federalist Society to stop listing him as a contributor on its website.
13 Oct, 08:31 AM UTC

Brian O'Sullivan
@osullivanauthor
Alito is an elitist. He's been political without question and yet, tries to tell us he's apolitical. The pathological lying on the right continues.
13 Oct, 02:51 PM UTC

@keithboykin
"The rank dishonesty and arrogance of Alito’s speech at Notre Dame are symptoms of the conservative majority’s unchecked power on the Court." - Adam Serwer https://t.co/qPXLcRilRy
13 Oct, 02:53 PM UTC

@EJDionne
Powerful rejoinder to Justice Alito by the great @AdamSerwer. It’s astonishing that a right-wing Supreme Court justice moving the law in an entirely new direction (or back in a very old direction) seems to expect those who disagree to ignore the political import of these moves. https://t.co/J2PK5YgKEG
13 Oct, 02:58 PM UTC

Fed up in Illinois
@mickivoss
'It is statistical fact': A journalist fires back after Justice Alito singled him out for criticism https://t.co/tdUcag8GYt
13 Oct, 03:00 PM UTC