Kristi Raik
@KristiRaik
I’ve read the Amnesty report, I’ve read about Amnesty’s ‘regrets’, and I’ve read the latest news on the inhumane brutality of Russian forces in Ukraine, and it all together makes me feel sick. A leading human rights organization has caused irreversible damage to itself and
07 Aug, 05:53 PM UTC

@IAPonomarenko
Make no mistake - Russia will be referring to @amnesty every single time it ruins yet another shopping mall or a residential block somewhere in Kremenchuk or Vinnytsia. “Yep, two dozen people have been torn to pieces, but did you see what the AI had said earlier?”
08 Aug, 01:33 PM UTC

Visegrád 24
@visegrad24
@CBSNews Why are you still not admitting that you information was false as the 30% quote only applied to the non-military aid sent by a specific NGO which has nothing to do with U.S. military aid? Why did you speak to Amnesty International?
08 Aug, 01:15 AM UTC

@yarko
This. Is. Insane. @amnesty's infamous report was conducted on the Russian-occupied territories of Ukraine. With people in Russian infiltration camps. According to the governmental @StratcomCentre
08 Aug, 02:18 PM UTC

@MaxBlumenthal
Following a coordinated freakout by the Ukraine lobby, CBS self-censors a report stating the obvious. Amnesty International has also issued a bizarre half-apology for issuing a single report (out of 40+) on well-documented abuses of civilians by the Ukrainian army. https://t.co/a0WInfAk6Y
08 Aug, 05:25 AM UTC

@StratcomCentre
The Centre for Strategic Communication has learned that Amnesty International researchers were operating on the occupied territories, including filtration camps and jails, and thus, some of the interviews conducted for the notorious recent report may have been conducted there.1/3
08 Aug, 01:51 PM UTC

@MarkAmesExiled
The Information War against Amnesty and CBS for straying a hair from the facile black/white propaganda line & doing their jobs is just stunning to watch. Waged by many of the same virtuous disinfo warriors who make a living denouncing Kremlin bot harassment campaigns
08 Aug, 02:59 PM UTC

@mtracey
This report by Amnesty International is scrupulously even-handed and goes out of its way *not* to exculpate Russia, whose war conduct it also condemns. But that's not enough for media/think tankers, who demand adherence to a propaganda narrative: not facts https://t.co/8Ffq4JaQ7e
07 Aug, 06:56 PM UTC

@NeilPHauer
Amnesty releases a statement on their widely lambasted Ukraine report. Not much there besides 'we were completely right and we're sorry if that made you mad.' https://t.co/gCQwOij2xj
07 Aug, 11:54 PM UTC

@Euan_MacDonald
While @amnesty’s recent report was incompetent, flawed, and could endanger the lives of Ukrainian civilians, it’s not good that a human rights organisation should be so thoroughly discredited in a country. Amnesty should withdraw the report, disown its conclusions, and apologise.
08 Aug, 10:02 AM UTC

AXUM KINGDOM
@AXUM_KINGDOM21
🎯To fight hunger, US envoy’s visit to Ethiopia must emphasize peace and accountability. @MikeHammerUSA, as the people of Tigray are severely suffering from war, #TigraySiege and #TigrayFamine, we need urgent resolution of the conflict.@EU_Commission @UKHouseofLords @amnesty
08 Aug, 12:43 PM UTC

@RussianEmbassy
The easiest way to become a ‘Russian propagandist’ is to start publishing truth. Why are we not surprised that ‘independent’ and ‘impartial’ @thetimes is heading a disgusting bullying campaign against ⁦@amnesty. 🔗https://t.co/0xGIfbShhY 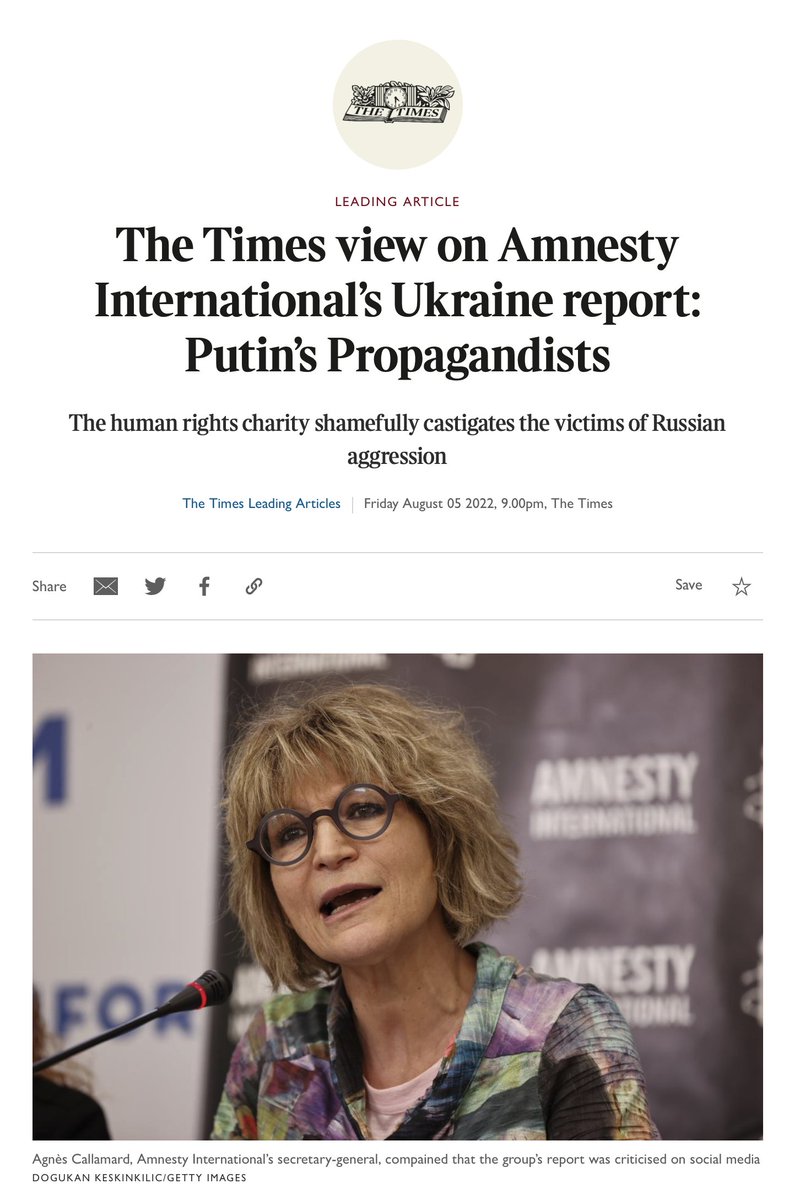 @Euan_MacDonald
Ukrainian gov’ body claims @amnesty gathered some of the information for its recent report on Ukraine from sources in detention in Russian “filtration” (concentration) camps, who had an incentive to give information that would please their Russian captors so as to gain release. https://t.co/wLhm1fFDwC
08 Aug, 03:24 PM UTC

Euromaidan PR
@EuromaidanPR
So, all the chips are placed: the ZNPP is mined, fragments of the HIMERS rocket are planted, General Vasiliev is ready to press the button, Dr Agnès Callamard, Amnesty International President is ready to blame the Ukrainian military.
08 Aug, 03:31 PM UTC