NFL Update
@MySportsUpdate
#Texans legend Andre Johnson says Deshaun Watson should stand his ground and get out of Houston. “The Texans organization is known for wasting players careers.” 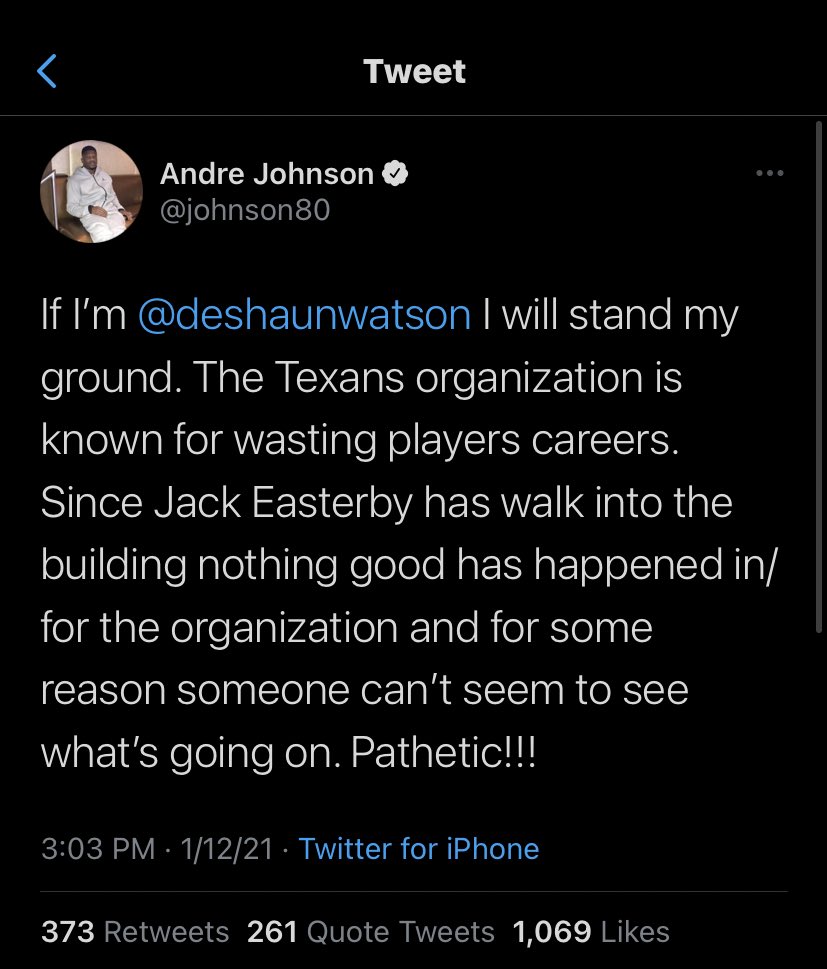 NFL Update
@MySportsUpdate
A number of former #Texans players have come out in support of Andre Johnson's tweet: https://t.co/dkq56ZZ02Z
13 Jan, 12:05 AM UTC

@LopezOnSports
You alienate Deshaun, you lose the locker-room. You alienate Andre Johnson, you lose everyone who ever played for the organization.
12 Jan, 11:17 PM UTC

Archbishop Deshaies
@HouCounterplot
I trust Andre Johnson more than I trust anyone associated with the Houston Texans.
12 Jan, 08:06 PM UTC 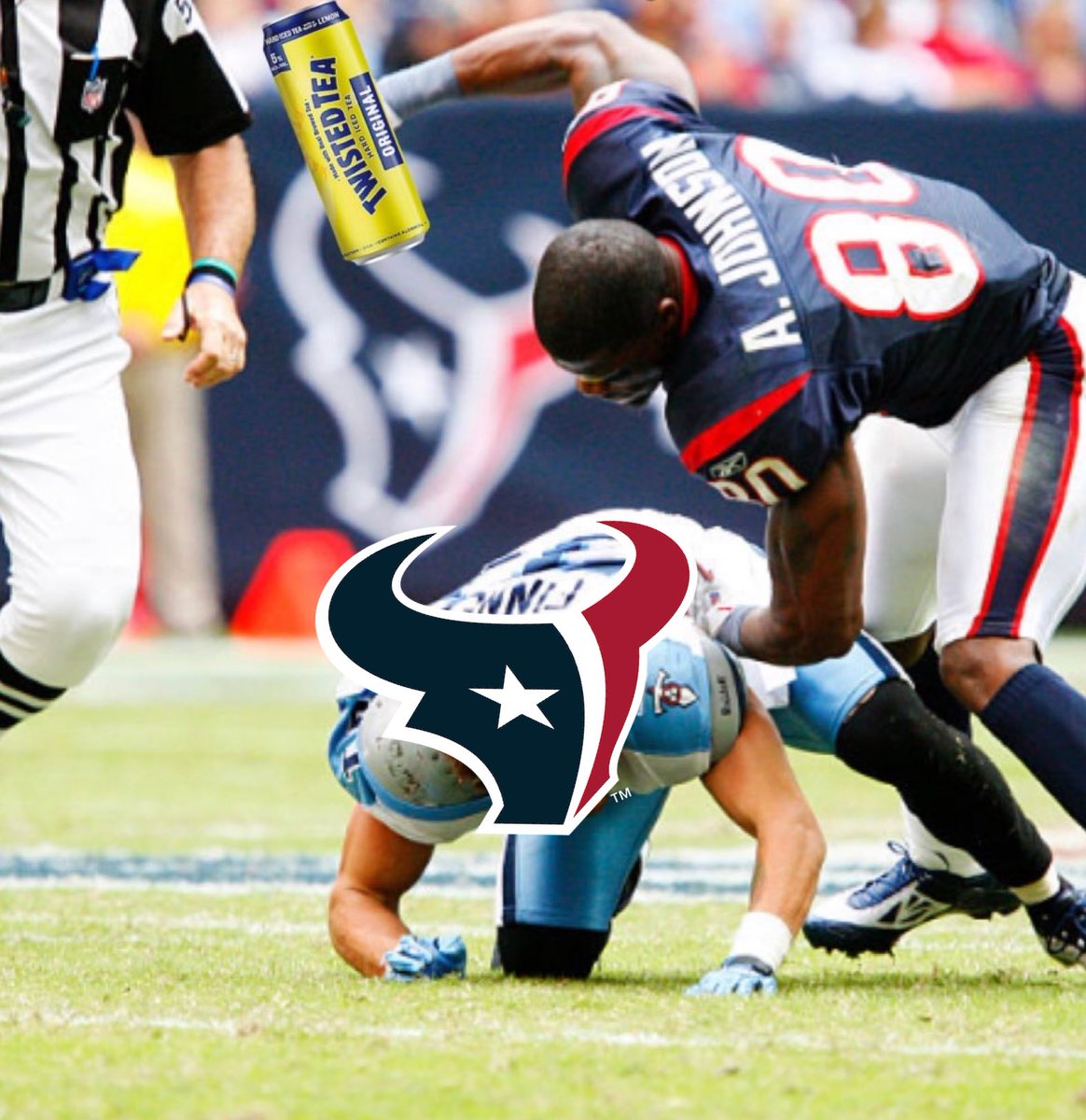 @ChronBrianSmith
Andre Johnson is the only Texan in the team’s Ring of Honor. He went through it all during the bad years and deserved better. Cal McNair’s inexperience and Texans’ ineptitude are the only reasons Jack Easterby is still employed by McNair’s Texans.
12 Jan, 09:06 PM UTC 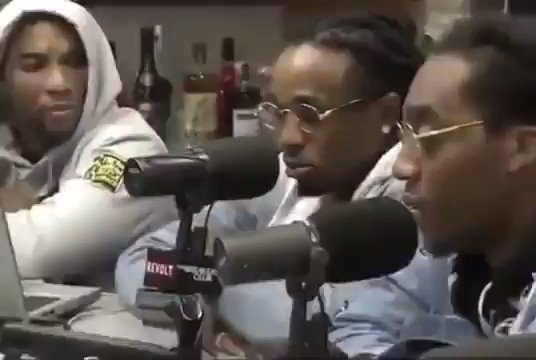 @JamesPalmerTV
To be clear, Andre Johnson is not just the best WR #texans player ever voicing his opinion. He spent time as a special advisor working for the team. He spends time around players. And is respected enough within the organization to be on the search committee for their next GM & HC
12 Jan, 09:18 PM UTC

Rob Kimbell
@RobKSports
Andre Johnson trying to save Houston football once again like he did for the better part of a decade https://t.co/rRAXdD0s5x
12 Jan, 08:11 PM UTC

@SeanTPendergast
I will point out Andre Johnson last tweeted 38 days ago. If he’s saying something on here it’s clearly meaningful to him. #TeamDre https://t.co/SKmvi0eIgk
12 Jan, 08:34 PM UTC 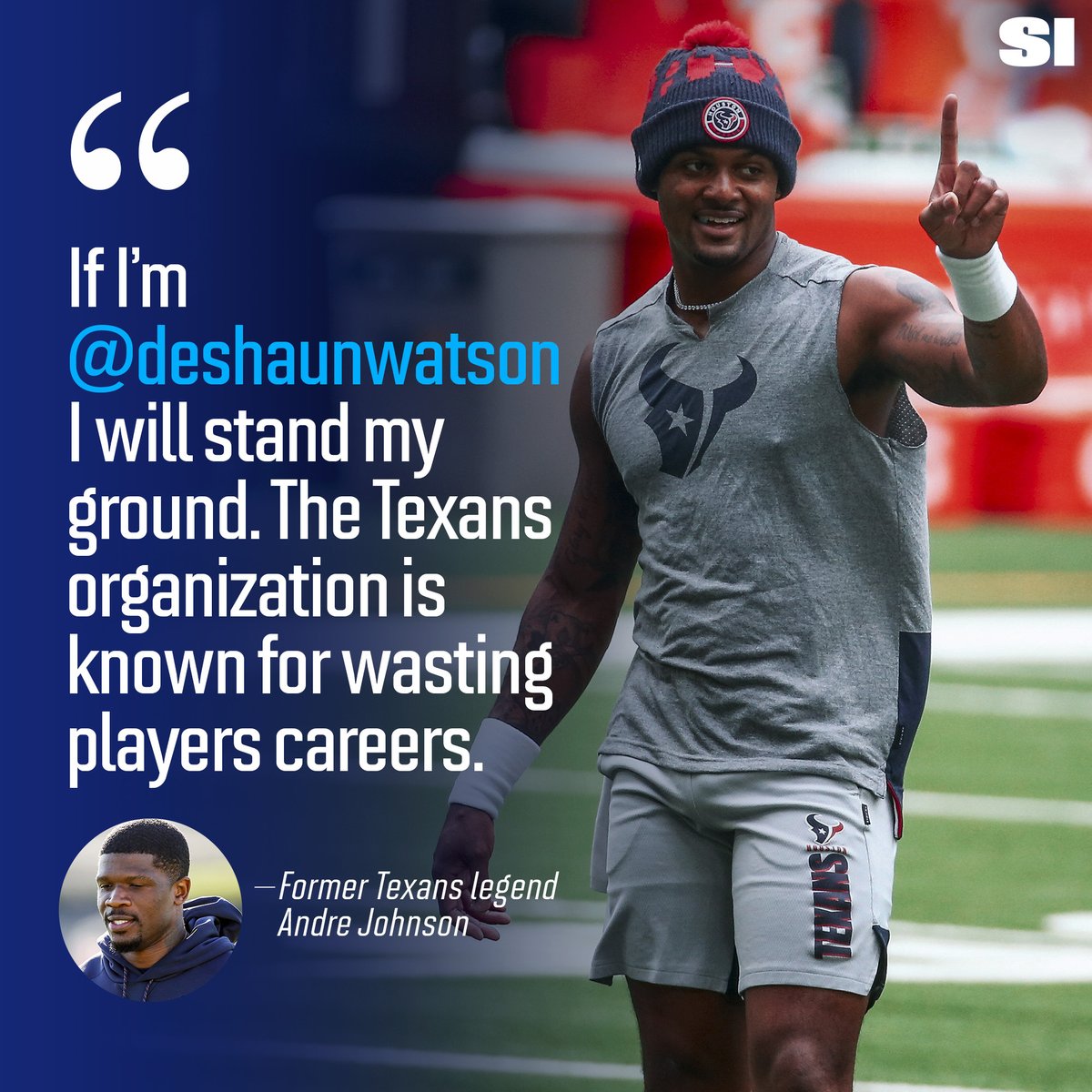 Fire Easterby Thoughts
@Texans_Thoughts
It cant be understated how important Andre Johnson’s tweet was. Cal wont listen to just anyone but he trusted Dre to help him with the most important decision in #Texans franchise history. Please, trust Dre again when he tells you to #FireEasterby https://t.co/bFcDF1ufHQ
12 Jan, 10:19 PM UTC

Cal McNair
@CalMcnair
What the hell has this “Andre Johnson” ever done for this organization??? #texans https://t.co/nUUrAS9vs9
12 Jan, 08:32 PM UTC

@ClintStoerner
Today was a great day in Houston folks 1) Texans request interview with Chiefs OC Eric Bieniemy -Spin it how you want, it was the right move 2) Jack Easterby explosively exposed by Andre Johnson -Ownership can’t ignore this one #WeAreTexans
13 Jan, 12:24 AM UTC

@DTGoteraKHOU
Easterby should’ve been fired yesterday but after Andre Johnson’s tweet...no way he can stay. What a statement.
12 Jan, 08:17 PM UTC 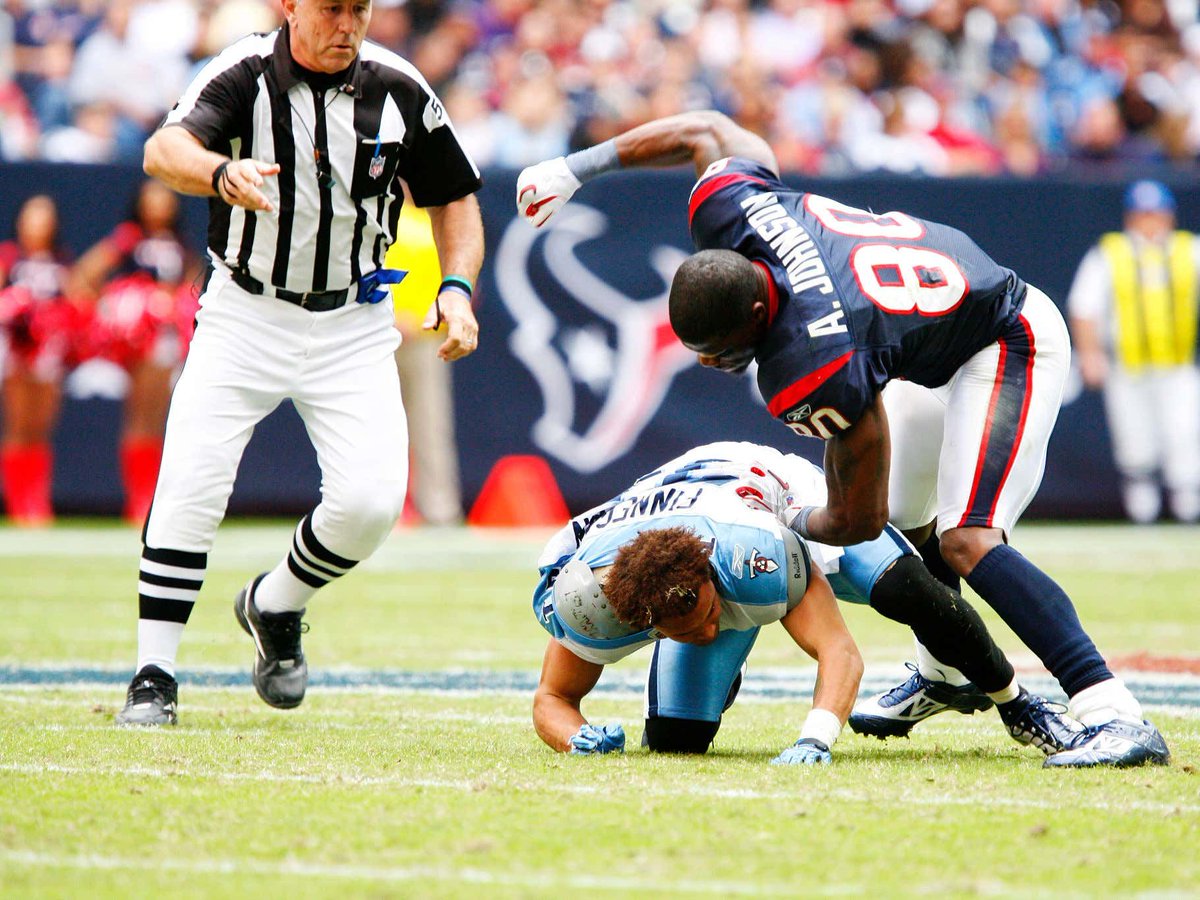 DC Texans Talk
@DCTexansTalk
It's abundantly clear that Easterby is the problem at NRG. Deshaun knows it. Andre Johnson knows it. Every fan, reporter, and league executive knows it. Caserio probably knows it. Cal, It's Easterby or Deshaun. And the fans will follow Deshaun. #FireEasterby https://t.co/1oAQe6bc9c
12 Jan, 09:28 PM UTC

Nick Scurfield
@NickScurfield
The reaction to Andre Johnson’s tweet reminds me of when he got a standing ovation for doing this https://t.co/WM7aMxgBQH
12 Jan, 09:45 PM UTC

@OmarKelly
I’ve know Andre Johnson since his UM days. That’s 20 years. He’s a man of few words and never wants to draw attention to himself. For him to come out and speak on this matter....it must be bad. https://t.co/jUiCH8yQcC
13 Jan, 12:42 AM UTC

@Outkick
"Andre Johnson ripping the Texans for 'wasting careers.' Is that really a fair perspective? I don't really think so. I mean, the Texans have won a bunch of different division titles in the last several years." -@ClayTravis 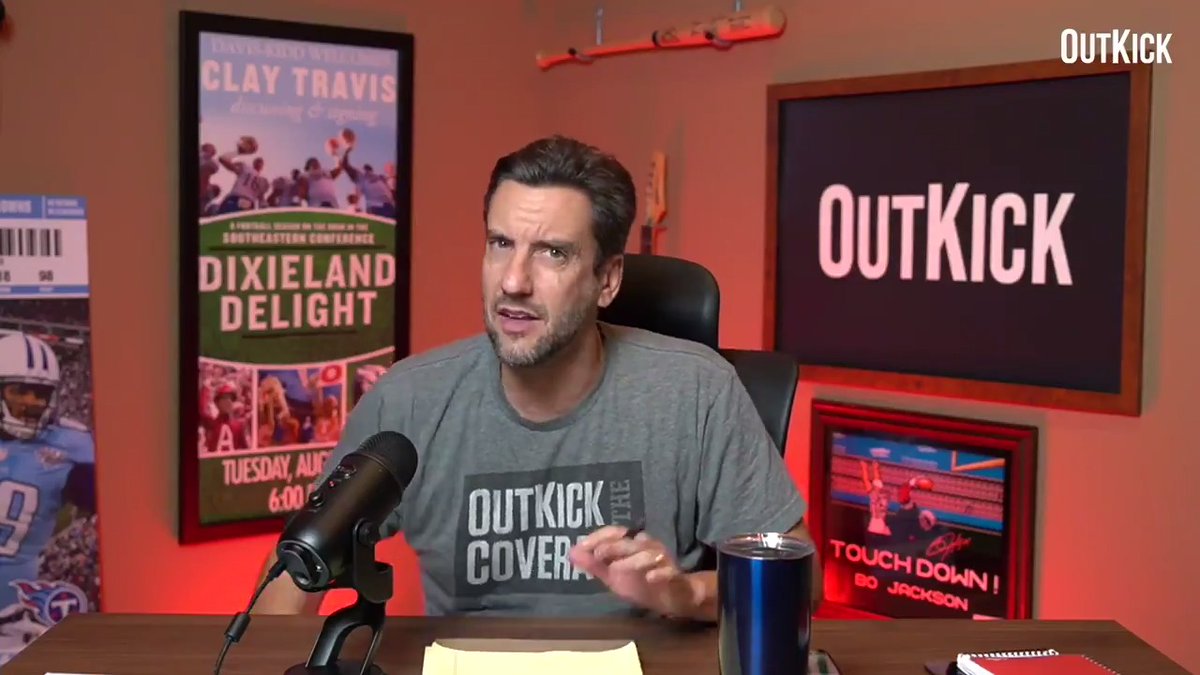