"Bank of England" is trending

Popular tweets on "Bank of England".

Richard Murphy
@RichardJMurphy
Some people might have noticed that I disagreed the Bank of England’s decision to increase interest rates yesterday. It was completely irresponsible, but what happens now? Let me offer some opinion on that and a comprehensive plan to get us through this mess. A thread…..
05 Aug, 08:12 AM UTC

@haveigotnews
Live scenes from the Bank of England: 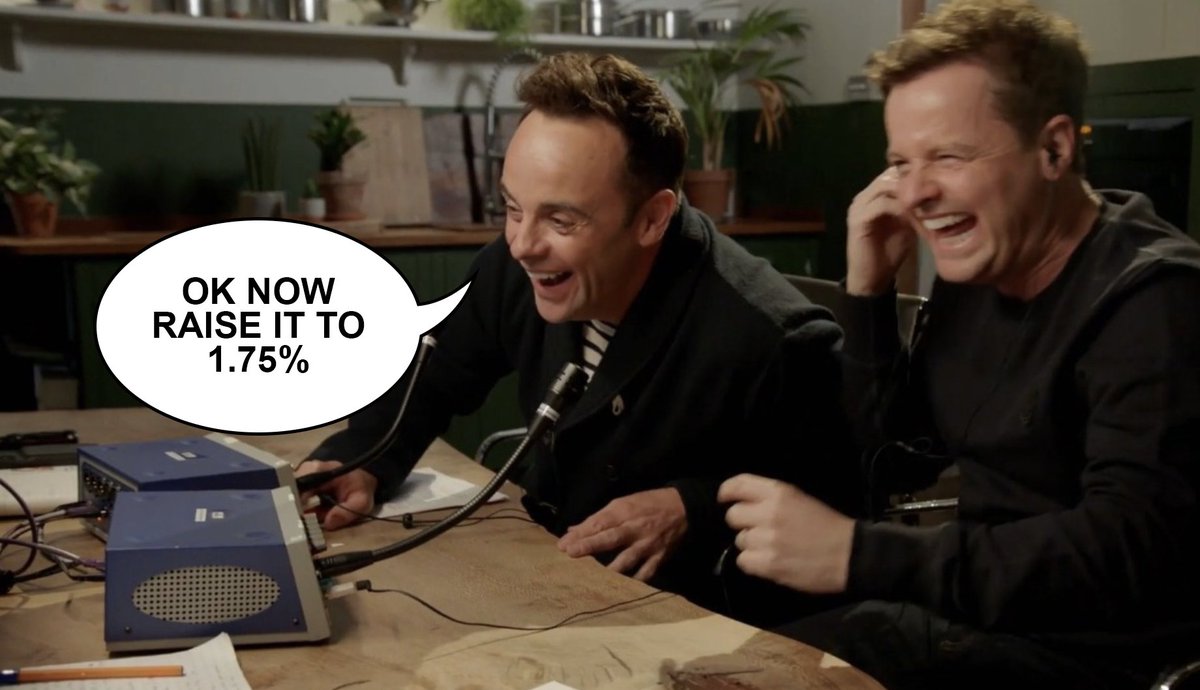 Laura Kuenssberg Translator
@BBCLauraKT
BREAKING: As the Bank of England predicts a recession lasting at least a year, the Conservative government tells us not to worry because it will ask socialism to bail out capitalism again x
05 Aug, 11:41 AM UTC

Chris Grey 🇺🇦
@chrisgreybrexit
From @Freedland "I asked Albrecht Ritschl, professor of economic history at the LSE, what single move the UK government could make to alleviate the pain. 'Suspend Brexit for 20 years,' came the reply." https://t.co/KMEzvUFLSC
05 Aug, 07:08 PM UTC

Will Hutton
@williamnhutton
Liz Truss, the Daily Mail and the Brexit right go after the Bank of England for not preventing 13 % inflation. It’s bullshit. If interest rates had increased 6 months earlier inflation might be 12.5 %. It’s war, Brexit and gas prices causing inflation. The rest is truth denial.
05 Aug, 10:48 PM UTC

Robert Kimbell
@Rob_Kimbell
Andrew Bailey insists he won’t quit, reports The Telegraph. The man is a dreadful Governor of the Bank of England and should be replaced just as soon as we have a new Prime Minister.
05 Aug, 11:35 AM UTC

Prem Sikka
@premnsikka
A sermon from Andrew Bailey, £575,000 a year Bank of England boss - Don't ask for inflation matching wage rise. What does he expect families to do? Silent on corporate profiteering which caused inflation, and fat-cat exec pay which increased inequality. https://t.co/TsM8FQsp6T
05 Aug, 10:50 AM UTC

Steve Bray Activist Against Brexit +Corrupt Tories
@snb19692
So Kwarteng says there is no help until the leadership or a corrupt, inept, deceptive & charlatan party is finalised! That should fill you all with confidence!🤡🤪🤪 https://t.co/sMyra6d3ua
05 Aug, 03:23 PM UTC

@Peston
If @trussliz believes “forecasts are not destiny”, as she says about the Bank of England’s forecast the UK is set for recession, she needs to say what her understanding is of the status and point of economics and economic forecasting. This is not trivial. It is central to how…
06 Aug, 07:27 AM UTC

Richard Murphy
@RichardJMurphy
The Bank of England is setting us up for an almighty economic crash https://t.co/vH7esUeAB3 My TikTok video discussing yesterday's Bank of England announcements
05 Aug, 01:18 PM UTC

@Peston
discredited” and government is best when it is done on the basis of instinct rather than rigorous analysis of data? Or is it just that she sees the Bank of England as a cowboy organisation? This stuff matters.
06 Aug, 07:27 AM UTC

@LanceForman
I was predicting 10-20% inflation for this year last October. How come a salmon smoker should have a more accurate idea of reality than the Governor of The Bank of England? Maybe we should do a work-swap for a few years. https://t.co/U9DlmeR7T9
05 Aug, 06:27 PM UTC

GET A GRIP
@docrussjackson
Climate experts say fracking is fucking stupid & Bank of England says cutting taxes while inflation soars is talking UK into a recession. Truss wants to frack while the climate crisis spirals out of control & warns against talkng UK into a recession. The Tory right are insane. https://t.co/bx98MkOj2N
06 Aug, 06:52 AM UTC

Paul Lewis
@paullewismoney
Truss accuses Bank of England Governor of talking UK into a recession by forecasting one. Clarity is sought over exactly what are her plans to weaken its independence https://t.co/CYPCfODHUh
06 Aug, 06:42 AM UTC

David Grace #FBPE
@DisgruntledRad
#r4today Government and Bank of England calls for Trade Unions to exercise pay claims restraint are unlikely to be successful while there is no restraint on senior management salaries nor dividends nor rents.
06 Aug, 07:16 AM UTC

🌸Ella Proud Refusenik🕊💕⛴🌺🌼🥰😘
@EleftheriaElpis
“The Bank of England has already prepared the microchip implant RFID chip to be implanted under your skin, and the Universal basic income is the bribe for you to accept the implant” 😡 IS THIS YOUR FUTURE?😡 https://t.co/4oUqrNzXJ2
06 Aug, 06:48 AM UTC

Miles King
@MilesKing10
Sunak, Truss and the Bank of England are lying to you – the UK economy is weak and rigged | Aditya Chakrabortty https://t.co/Q4UPj246BT
05 Aug, 08:18 AM UTC

🏴󠁧󠁢󠁳󠁣󠁴󠁿Self determinationist, separatist🙂
@art_iculate
@fr4ser @Ivan_McKee The UK central bank is the misnamed Bank of England. Time its name was changed to reflect what it is i.e. The Bank of the UK, or the UK central bank. #bbcgms @BBCRadioScot
05 Aug, 08:14 AM UTC

Oliver 🌹✊💚 #ClimateAction #Socialist
@tynewrc
Why - because the Bank of England is the England of Establishment millionaires, not the England of millions of key workers, unemployed and homeless https://t.co/bd99uv8MLg
06 Aug, 07:42 AM UTC

Mac
@Admiral_JKirk
Bank of England predict worst recession for 59 years, whilst the worst Prime Minister ever is living it up on holiday. All caused by Brexit, poor handling of pandemic, economic incompetence and Tory corruption.
06 Aug, 07:44 AM UTC

Albannach
@SaorAlbannach
Kevin Hague is an expert in absolutely everything, all the time. Except when it comes to Bank of England interest rate rises, because they're damaging to his pro-Union propaganda. Just like his gowk of a rejected Spitting Image puppet, Sam Taylor. Who funds These Islands? https://t.co/3DV0TP64ks
06 Aug, 07:43 AM UTC

Rajesh Kumar
@RajeshGuptaReal
GBP/USD Forecast: British Pound Continues to Look Lost - 05 August 2022 The British pound has been all over the place during the trading session on Thursday, as the Bank of England raised interest rates by 50 basis points.
06 Aug, 07:42 AM UTC

Investors Europe
@investorseurope
European shares were subdued on Friday with all eyes on U.S. jobs data while investors assessed Bank of England's biggest rate hike in 27 years amid growing fears of a recession.
06 Aug, 07:41 AM UTC

A Northern Soul #ToriesOut #FBPE #FBNHS
@GrantFW2
"New polling by IpsosMori showed that just 27% of voters believe the government has done a good job of managing the economy – the lowest level since the pollster began tracking it in 1998." I wonder why that is, @annietrev @trussliz @RishiSunak https://t.co/zWdMpZ6ePZ
06 Aug, 07:41 AM UTC

londonyc
@londonyc
acgrayling: RT @williamnhutton: Liz Truss, the Daily Mail and the Brexit right go after the Bank of England for not preventing 13 % inflation. It’s bullshit. If interest rates had increased 6 months earlier inflation might be 12.5 %. It’s war, Brexit a… https://t.co/nL3vDetTUx
06 Aug, 07:40 AM UTC

Leila ليلى‎ Agniveer
@Leila38_
Sunak, Truss and the Bank of England are lying to you – the UK economy is weak and rigged https://t.co/e2N0WpetDf
06 Aug, 07:39 AM UTC