@PalmerReport
Matt Gaetz is up there ranting about the "Biden crime family" during Trump's impeachment. Gaetz should be expelled.
13 Jan, 06:20 PM UTC

Uncovering The Truth
@thebr0keb0i
Matt Gaetz is wildly attacking Hillary Clinton and the “Biden crime family.” He just spread the “dead people voted” false conspiracy that led to the insurrection. Expel him immediately. Investigate Matt for his involvement in the Jan 6 attack. House Republicans must condemn him.
13 Jan, 06:24 PM UTC

@DomenicoNPR
Republicans are calling for "unity" and not impeaching Trump and Matt Gaetz says of Hunter Biden and the "Biden crime family," "Don't think for a second we're going to drop that!" So unifying. And duh
13 Jan, 06:21 PM UTC

@IAmSophiaNelson
Why is someone like @RepMattGaetz allowed to serve in Congress? He is a despicable disgusting foul man. The #Biden Crime family? WOW!!! #ImpeachTrumpAgainNOW
13 Jan, 06:22 PM UTC

@AnnieLinskey
Rep. Gaetz is bringing Hillary Clinton and the "Biden crime family" into his defense of Trump on the House floor now.
13 Jan, 06:22 PM UTC

Sweet Lettuce
@EmVeeBiid
@jaketapper Mentioning the Biden Crime family indicates to me that he isn't fit to be a public official. Bring up conspiracy theories on the house floor smh
13 Jan, 06:23 PM UTC 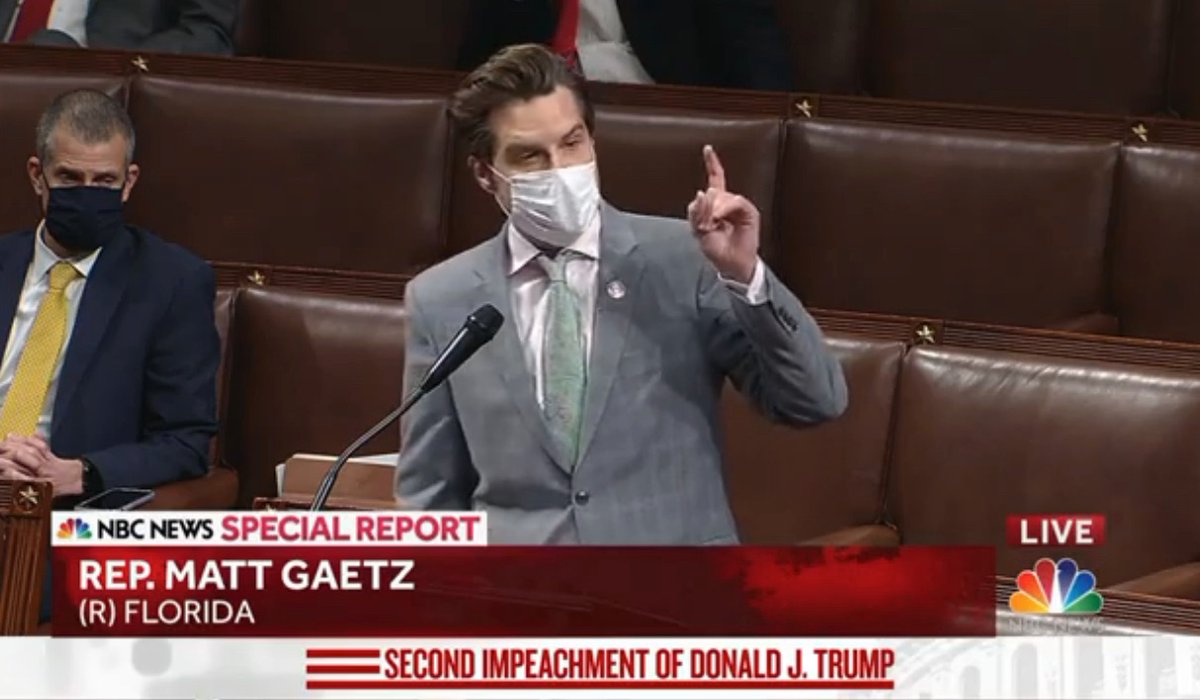 Tony - I'd rather be a do-gooder than a do-badder
@IsntTony105
Matt Gaetz (R) claims Trump was right about the "Biden crime family", "the Russia hoax" and "voting irregularities." How are these people elected to high office?
13 Jan, 06:23 PM UTC

Lea (like tea) Kay 🇨🇦🏳️‍🌈
@KittyJerkface
"Biden Crime Family" - Fox News via @mattgaetz on the house floor a moment ago. These guys are just a walking joke. It'll be interesting to see what happens with them after... #ImpeachTrump #ImpeachmentDay
13 Jan, 06:22 PM UTC

Mary Ann Barbero
@marieann66
@RBReich @RepMattGaetz You just can’t make this up, Matt Gaetz said, actually said, the Biden Crime family! Who are the misinformed morons that sent him to Congress. Ever since Trump you see the character of our congressmen deteriorate drastically. We have to work harder to inform our voters
13 Jan, 06:59 PM UTC

Sue Cushing
@hav101
@gtconway3dg The Republican Members keep talking about the Biden Crime family. What is that about?
13 Jan, 06:57 PM UTC

Word To Silicone
@naturalmilktits
I've decided today I'm coming out as racist. Just as many people come out as gay, I want to get out of this closeted space. I love my country, my police, and frankly could care less about BLM. I have to speak out and use platform to take down the one evil, the Biden Crime Family.
13 Jan, 06:57 PM UTC