Big 12 is trending on Twitter. Popular tweets on Big 12.

@kbohls
Prominent Big 12 source tells the American-Statesman the Texas-OU move to the SEC is almost done. "They've been working on this for a minimum of 6 months, and the A&M leadership was left out of discussions and wasn't told about it." Move could become official in a week.
23 Jul, 12:50 PM UTC

@RedditCFB
With an uncertain number of teams going forward, the Big 12 is reportedly considering a name change to the Big Guardians.
23 Jul, 03:32 PM UTC

Pregame Empire
@PregameEmpire
ACC, Big Ten, and Pac 12 snagging the rest of the Big 12 schools like

@UnnecRoughness
TCU insider @JClarkHFB247 has reported that TCU, Baylor, and Texas Tech have already reached out to the PAC-12. One source told him “The Big 12 is going to blow up man”
23 Jul, 04:50 AM UTC 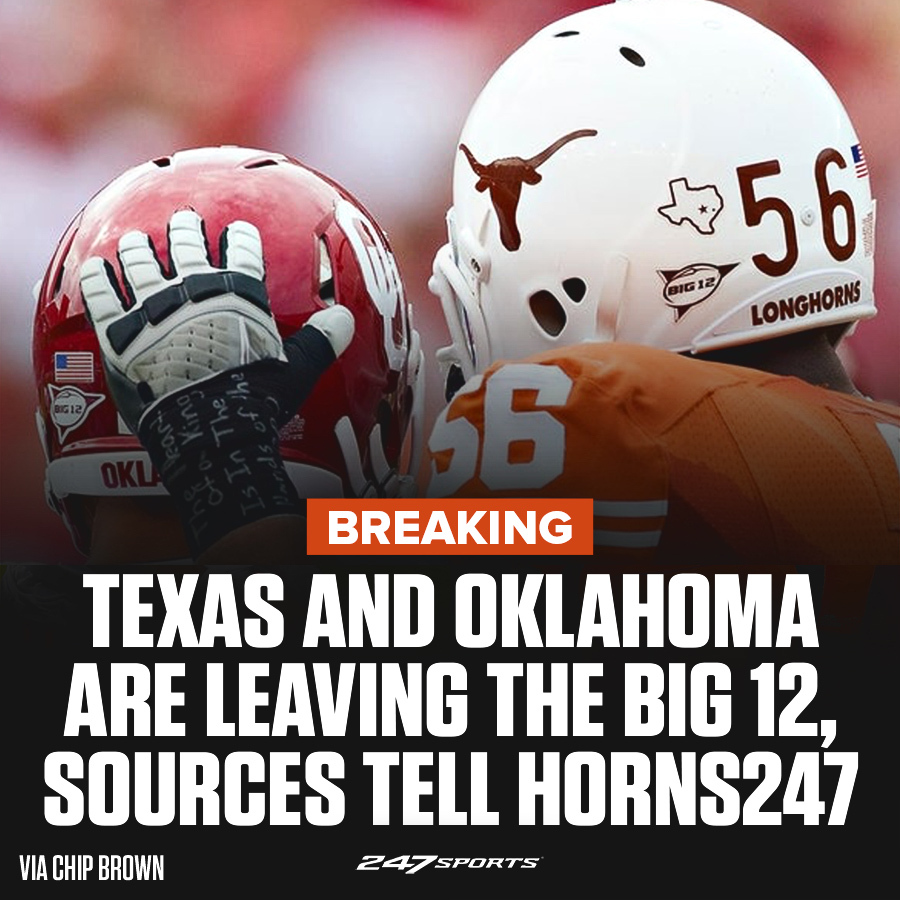 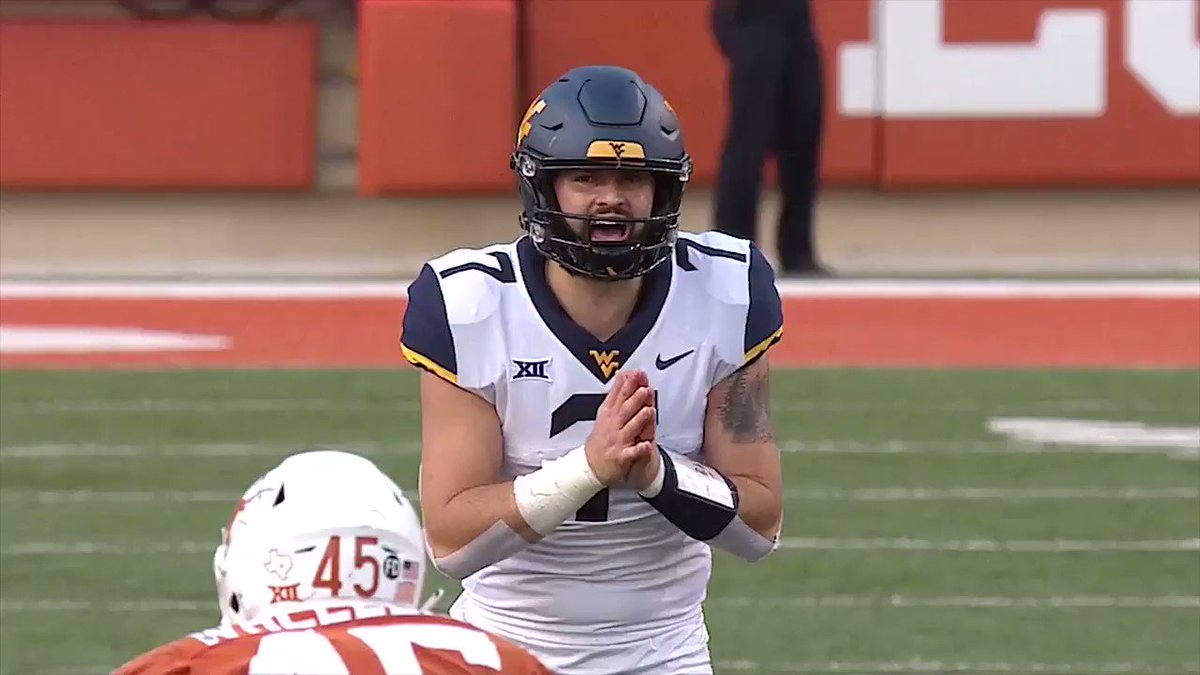 The Rob Breaux Show
@robbreauxshow
If it breaks this way, Texas Tech and Oklahoma State can finally embrace that they’ve always been each other’s counterpoint. A true rival emerges from the ashes of the Big 12. #gunsandpistols https://t.co/KzHsHU3QQr
23 Jul, 02:41 PM UTC

Old Row Arkansas
@OldRowArkansas_
This is the official announcement that Dixieland delight adlibs are changed to “fuck texas, and OU, and the Big 12 too” until further notice. Thank you for your cooperation.
23 Jul, 02:13 AM UTC

Scott Bischoff
@Bischoff_Scott
Source tells me that Louisiana Lafayette and Louisiana Tech are going to be joining the Big 12 conference.
23 Jul, 10:57 PM UTC

Tarik D. LaCour
@realscientistic
I have a feeling....if A&M wanted back into the Big 12....Texas fans wouldn't be calling @GregAbbott_TX to stop it. They would say "Bring it on." And that's the difference between Texas and Texas A&M: One knows it's a blue blood and one knows it isn't. #AggieFactFriday
23 Jul, 04:38 PM UTC

⚔️Sidelines - UCF⚔️
@SSN_UCF
“ESPN is reporting as the Big 12 has already started to consider the possibility of adding UCF, Houston, Cincinnati &/or BYU to the league. According to ESPN, even if Texas & Oklahoma don’t leave the Big 12, the league is willing to consider expansion.” https://t.co/Gwaq1ojdva
23 Jul, 07:42 PM UTC

Saturday Down South
@SatDownSouth
BREAKING: Oklahoma & Texas have officially left the Big 12. Both programs were granted immediate permission to leave & now have the freedom to go 11-2 w/ an embarrassing 30 pt loss in the 1st Round of the Playoff in any conference of their choosing. #HookEm #BoomerSooner #CFB
23 Jul, 09:41 PM UTC

Nick Harris
@NickHarris247
That being said, the likelihood of Texas and OU negotiating a buyout with the Big 12 is pretty high which could put both teams in the SEC by as early as 2022-23.
23 Jul, 06:34 PM UTC

Steve Fuller
@fullsteve
The arrogance of schools like Iowa St. is laughable. There are 15-20 college football programs that "bring eyeballs." No one cares about Texas Tech vs. Kansas St. More people will watch UC vs. UCF this year. None of the remaining Big 12 schools bring any eyeballs to the Pac-12. https://t.co/hBxbcqMJX9
23 Jul, 07:04 PM UTC

@noahoxnr
K-State has notified @KSNTNews that all inquiries are “being sent to the Big 12 office and Commissioner Bowlsby”. So no updates from Manhattan.
23 Jul, 08:17 PM UTC

@TexasTribune
A group of lawmakers have filed legislation that would prohibit Texas public universities from switching their affiliations with collegiate athletic conferences without approval from #TXlege. The move is largely symbolic and is unlikely to become law. https://t.co/T2kdUnGStc
23 Jul, 11:33 PM UTC

@ByPatForde
New column: Nine years ago, Texas A&M officials believed they were on a path to being the "controlling brand" in Texas by breaking away from the Big 12 and the hated Longhorns. We have this update ... https://t.co/Fs0cK76nsI
23 Jul, 11:50 PM UTC

@RyanABlack
There has been no official statement from Kansas State since news broke of Texas/Oklahoma possibly leaving for the SEC. Following Thursday’s call among Big 12 leadership, I contacted K-State AD Gene Taylor for comment. He declined my request.
23 Jul, 11:25 PM UTC

@OUDailySports
"We are disappointed by the lack of engagement and transparency from our colleagues at OU over the past months on a matter with serious ramifications for our state." OSU President Dr. Kayse Shrum isn't pleased with the #Sooners' potential Big 12 exit. https://t.co/C9S2ZRoxSb
23 Jul, 11:00 PM UTC

Eduardo Perez
@EddiePeezy
@RebeccaMoreno25 I couldn’t afford them in the Big 12 now I’m gonna have to crank up the onlyfans to get SEC tickets
23 Jul, 11:33 PM UTC