@mikegalsworthy
Boris Johnson says we should all now "move on". I disagree entirely. Who's with me?
25 May, 12:05 PM UTC

@Keir_Starmer
The door of 10 Downing Street is one of the great symbols of British democracy. A democracy which relies on the principles of honesty and integrity. Its current inhabitant has failed to uphold these principles. Boris Johnson must go.
25 May, 12:01 PM UTC

David Noble FRSM 💙🏴󠁧󠁢󠁷󠁬󠁳󠁿 🇺🇦 🌻
@DavidPNoble63
Boris Johnson: "it was only right to say goodbye to colleagues who were leaving" My aunt Joyce, on a borrowed phone in ICU: "David, I'm scared, I don't want to die, I've so much living left to do" Me: "I love you, you're my hero, I will see you soon" The next day she died.
25 May, 03:57 PM UTC

@PippaCrerar
Three in five Brits say Boris Johnson should resign after publication of Sue Gray's report, according to a snap @YouGov poll. And 74% believe that the PM knowingly lied about breaking lockdown rules, including a majority of Tory voters.
25 May, 02:01 PM UTC

@jessphillips
Boris Johnsons defence is that he is an idiot.
25 May, 12:15 PM UTC

@zarahsultana
Imagine being a Downing Street cleaner, having your social life cancelled by lockdown and then having to clean-up vomit and wine spilt on the walls at a party, only to be mistreated by the government staff responsible? That's the elitist culture Boris Johnson is responsible for.
25 May, 02:38 PM UTC

@mrjamesob
The 'arms' that Boris Johnson wants to 'put around the country' remind me of the 'protective ring' he 'put around care homes'.
25 May, 03:12 PM UTC

@mikeysmith
One more time, because Boris Johnson keeps saying he thought he was attending “work events”: Work events were not allowed under Covid rules.
25 May, 12:19 PM UTC

@AdamBienkov
So in summary Boris Johnson: - First said he was deeply “humbled” by the Sue Gray report - Then said he had been “vindicated” by it - Then called on the leader of the opposition to resign.
25 May, 12:11 PM UTC

@PippaCrerar
Boris Johnson told Tory MPs that Partygate had "held up a mirror" to his Government - but suggested the mirror had been "distorted" by the press. FWIW everything the @DailyMirror (if that’s what he really meant) has reported on the scandal was confirmed today by Sue Gray.
25 May, 05:35 PM UTC

@EdwardJDavey
Boris Johnson held goodbye drinks in Number 10, while families couldn't even say goodbye to their loved ones. For him to now claim it was "his duty" to attend these rule-breaking parties is a sickening new low.
25 May, 03:15 PM UTC

@mattletiss7
Boris Johnson thought it was right to have a party to thank people who were leaving their job, whilst at the same time telling you your relatives had to die alone in hospital. If that doesn’t wake you up nothing will 🤷🏼‍♂️ #questioneverything
25 May, 04:40 PM UTC

Supertanskiii
@supertanskiii
Boris Johnson is a shameless piece of shit. That statement is an insult to the entire country. Fuck off you slippery bastard.
25 May, 11:53 AM UTC

@lizziedearden
Breaking: Legal action has been launched over the Metropolitan Police’s alleged failure to “adequately investigate” Boris Johnson’s attendance at Downing Street Parties The @GoodLawProject has given the force two weeks to respond to its legal letter https://t.co/0FO1JpvjpT
25 May, 09:38 AM UTC

@wesstreeting
The security guards who were ridiculed by people more powerful than them, and the cleaners scrubbing red wine off the walls, knew that Johnson and co. were breaking the rules, but we’re supposed to believe that Boris Johnson didn’t. Pull the other one.
25 May, 05:06 PM UTC

Lost Glasgow
@LostGlasgow
Following the horror in Texas, worth remembering that, after the Dunblane Massacre, and the UK handgun ban, Boris Johnson wrote: “Nanny is confiscating their toys. It is like one of those vast Indian programmes of compulsory vasectomy.”
25 May, 07:06 AM UTC

Richard Murphy
@RichardJMurphy
There is no change to personnel in No.10 that can alter its culture unless Boris Johnson goes. The person at the top sets the tone and as was noted in Panorama last night, he’s never going to change. No apology will be sufficient then. Only a resignation will be.
25 May, 06:36 AM UTC

@DominiqueTaegon
Reading Sue Gray’s report. In all honesty, I have attacked the PM on Partygate. But reading this report, it’s looking more and more like a mainstream media witch-hunt against Boris.
25 May, 12:53 PM UTC

@AngelaRayner
The Sue Gray report lays bare the rot that has infected 10 Downing Street under this Prime Minister. 👇🏻 https://t.co/DKGilUaJ7l
25 May, 06:55 PM UTC

@JuliaHB1
Two key questions that Lobby journalists should ask Boris Johnson at his press conf at 3.30pm: Why didn't No10 staff fear for their own lives or the lives of anyone else when they met for drinks parties during lockdown? If it was safe for them, why wasn't it safe for us too?
25 May, 02:10 PM UTC

@BenKentish
At the 1922 Committee, Harriett Baldwin suggested that alcohol should be banned in Downing Steet and government departments. Boris Johnson replied that he thought Britain may not have won the Second World War if alcohol hadn’t been available in Downing Street in 1940.
25 May, 05:18 PM UTC

@EchoNickG
Tomorrow's @TheNorthernEcho The North East turns on Boris Johnson All the fall out, reaction and analysis from #Partygate & #SueGray #TomorrowsPapersToday 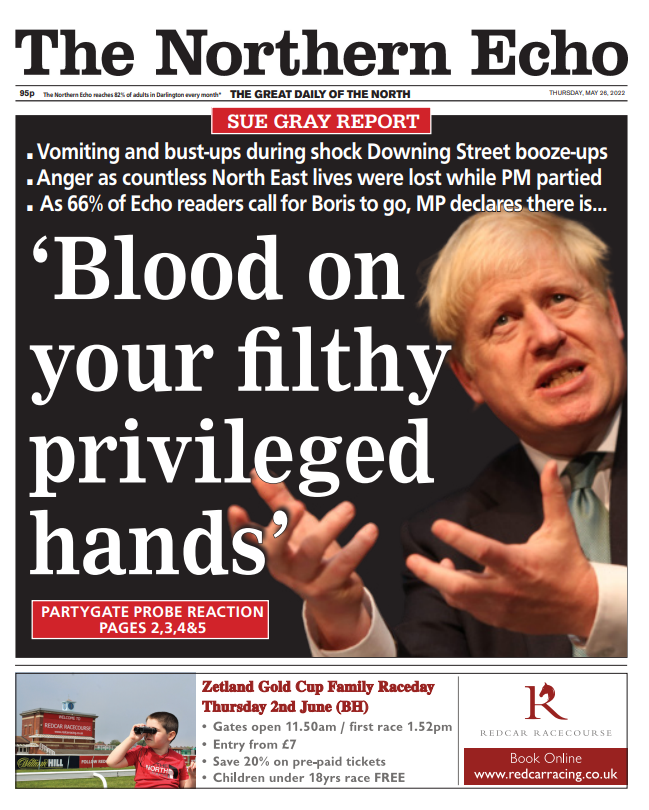 @Otto_English
Boris Johnson isn't sorry. He's saying he's sorry, but that's only because they got caught.
25 May, 07:13 PM UTC

@GoodLawProject
Do you think the Met Police have done enough to investigate Boris Johnson?
25 May, 12:23 PM UTC

@LBC
"In the old days 'taking personal responsibility' was almost a synonym for 'I am about to resign'. Well, I don't know what it means now." Andrew Marr's devastating takedown of Boris Johnson, in response to the Sue Gray report's "gruesome detail". @AndrewMarr9 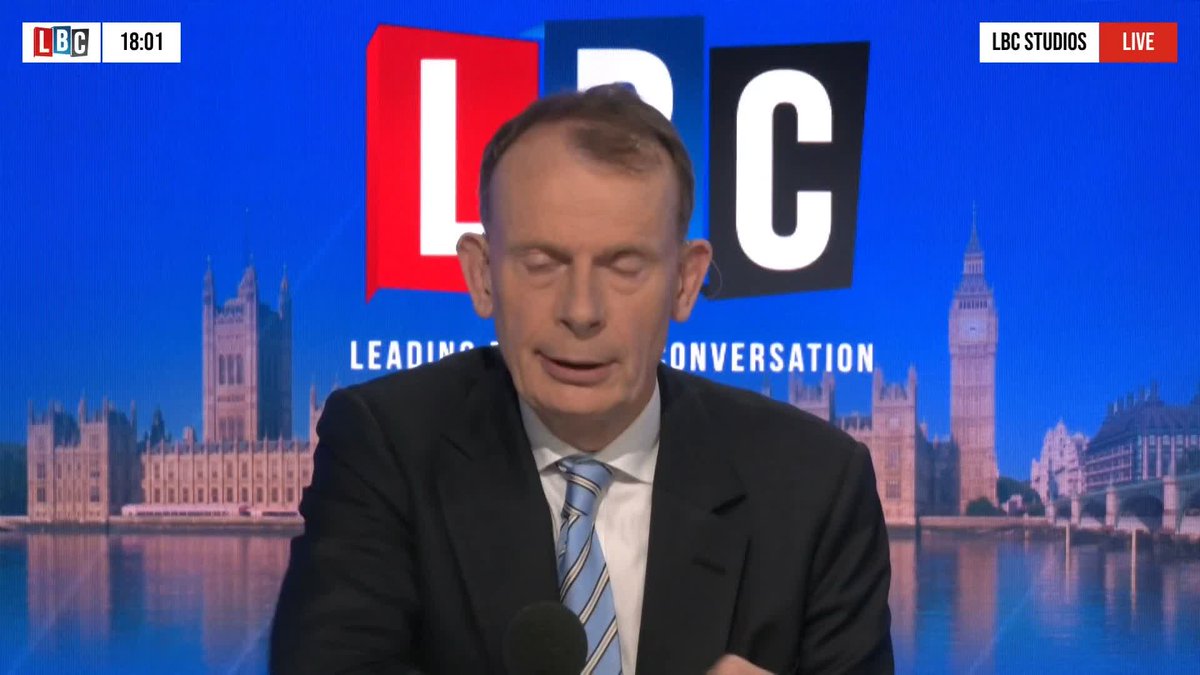 @SpecCoffeeHouse
'The BBC has dropped the pretence and is openly campaigning to unseat an elected prime minister.' ✍️Lloyd Evans https://t.co/auaWjGQOyX
25 May, 07:45 AM UTC