Burisma is trending on Twitter. Popular tweets on Burisma.

@JoyceWhiteVance
Trump is arguing Hunter Biden’s Burisma work warranted a criminal investigation. Which means all the deals, trademarks & loans Ivanka, the Kushners, Don jr & Eric have received during his presidency should get the same.
27 Jan, 10:21 PM UTC

@JoyceWhiteVance
Assume Hunter Biden committed crimes in connection with Burisma. Assume the FBI somehow missed it. Why is Trump’s response is to ask Ukraine to investigate (with strings attached) instead of making sure it’s referred to US law enforcement for investigation? Not a defense.
27 Jan, 09:46 PM UTC

@JoyceWhiteVance
If we’re going talk about money Hunter Biden made at Burisma, can we at least see Trump’s tax returns? If Trump’s personal finances were a red line Mueller couldn’t cross, why does he get to talk about Joe Biden‘s son’s finances? Anyhow, none of this is a defense to the charges.
27 Jan, 10:01 PM UTC

@waltshaub
If it wasn't obvious what a goofy diversion this Burisma talk is, the Republicans knew about Hunter Biden's role at Burisma while Joe Biden was VP and they controlled both chambers of Congress. But they're talking about that now so they don't have to talk about what Trump did.
27 Jan, 10:19 PM UTC

@TomFitton
BOOM! Pam Bondi DROPS A MOAB ON DEMOCRATS, BIDEN CORRUPTION -- Bondi Blows Up Burisma Scandal for All America to See - This was BRUTAL! https://t.co/tWeWKo1Rm1 via @gatewaypundit
27 Jan, 10:09 PM UTC

@charliekirk11
Everyone knew Hunter Biden's time at Burisma was an issue: Washington Post: "...nepotistic at best, nefarious at worst" BuzzFeed: "...raises questions about a potential conflict of interest for Joe Biden" So why was nothing done? RT if you want to see BOTH Biden's under oath
27 Jan, 10:16 PM UTC

@ScottPresler
Pam Bondi is completely eviscerating Hunter Biden & his ties to Burisma. The democrats opened a can of worms & there’s no turning back now. Trump’s defense team is rock solid.
27 Jan, 09:46 PM UTC 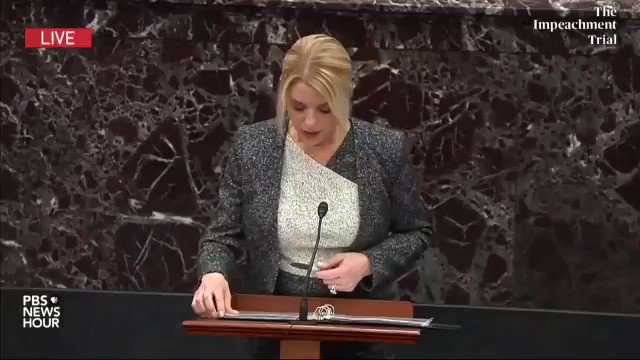 @RepRatcliffe
Contrary to Democrats' “it’s debunked” assertion, Ambassador Yovanovitch admitted the Hunter Biden-Burisma pay-to-play board position was so concerning to the Obama administration that Burisma was the only Ukrainian company she was briefed on for her Senate confirmation. 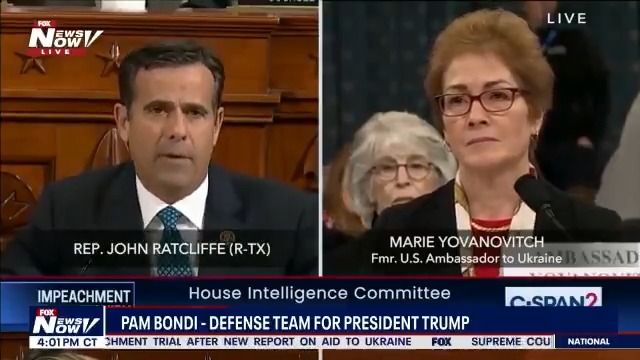 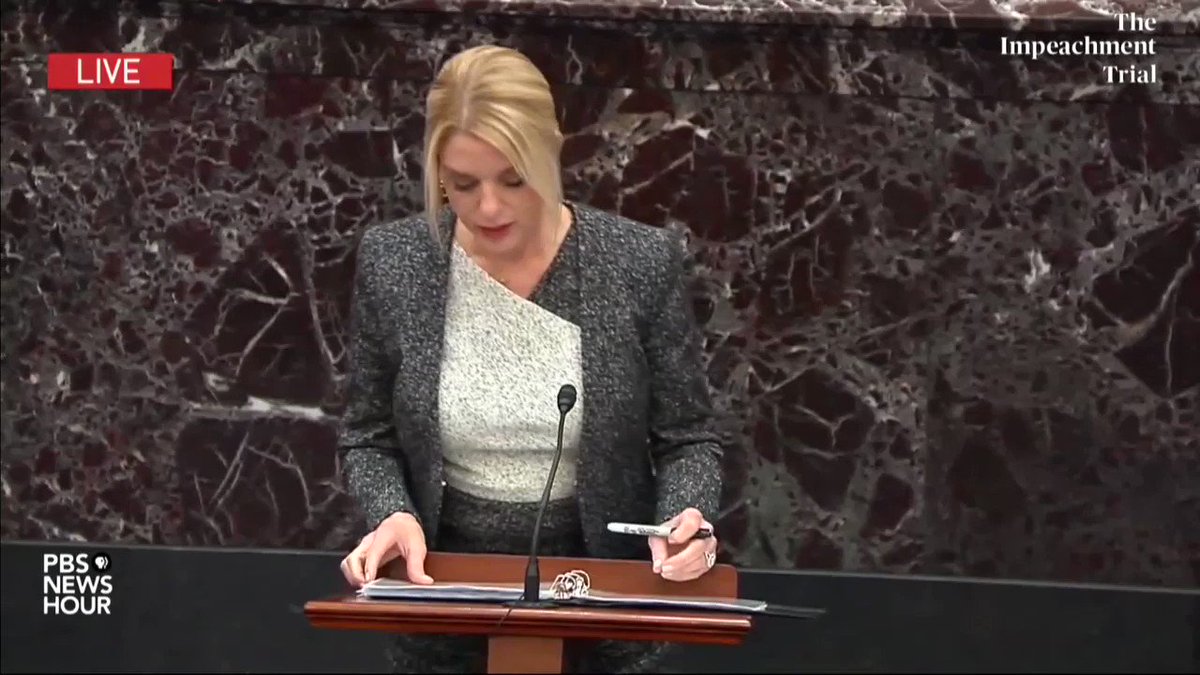 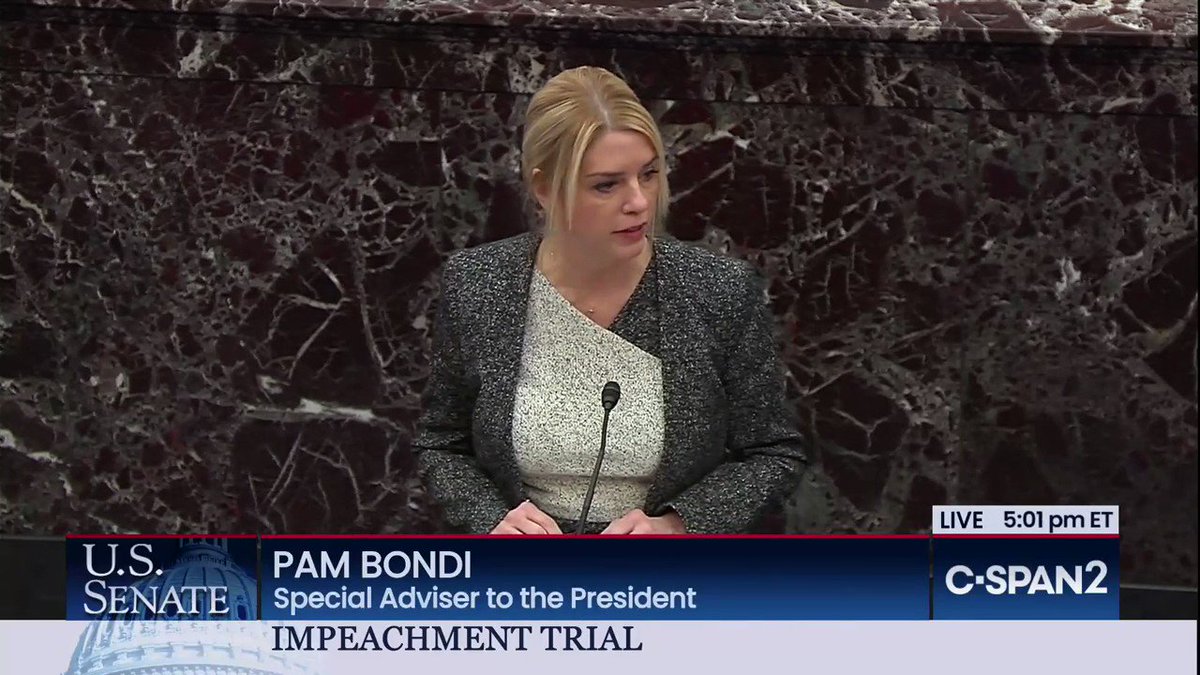 @KlasfeldReports
Pam Bondi notes that Hunter Biden joined the Burisma board while there was an *open* investigation into the company, emphasizing that word. That emphasis cuts against her point: Any alleged misconduct predated Hunter Biden's work there.
27 Jan, 09:56 PM UTC

@BreitbartNews
This is devastating to the Bidens. https://t.co/mjOTjKDAnV
27 Jan, 10:32 PM UTC

@TheRickWilson
Having Pam Bondi lead the charge on Burisma/Biden was one of those "this sounds great in the pitch" moments that turns out so so wrong. New Coke wrong.
28 Jan, 12:36 AM UTC

@SenTedCruz
Why should the American people care about Hunter Biden & #Burisma? The answer is simple: there is significant evidence of corruption. WATCH Pam Bondi break down #BurismaBiden. ⤵️ 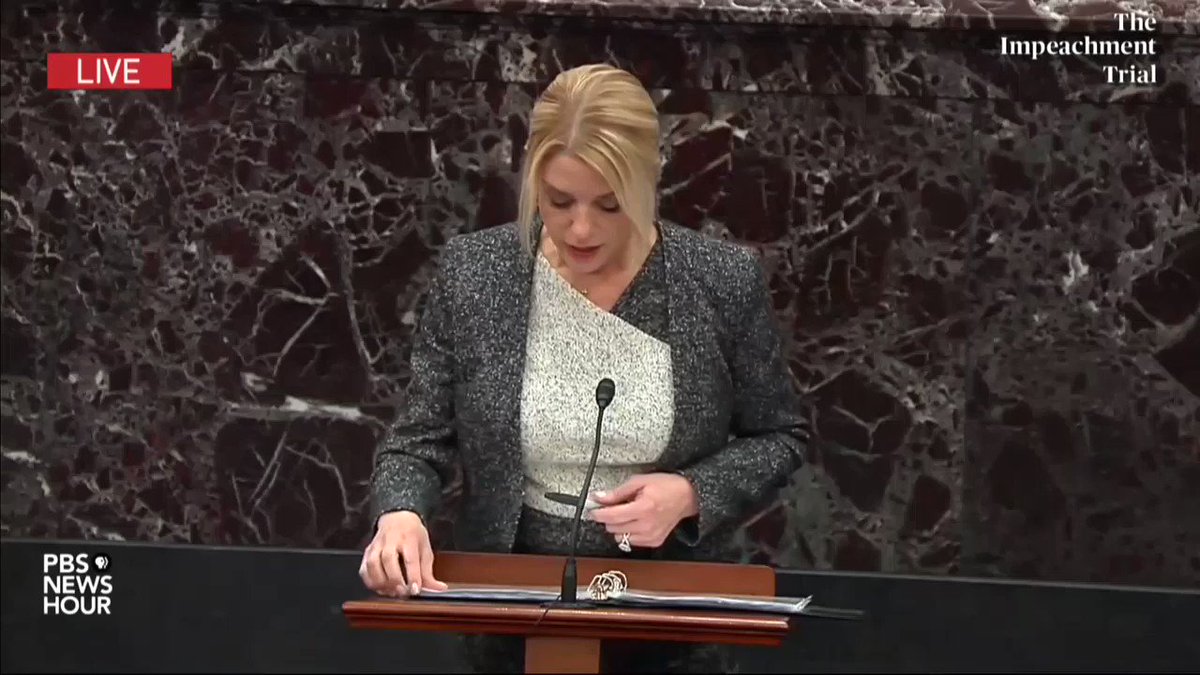 @WhiteHouse
The House Managers talked about the Bidens or Burisma 484 times. But they never gave you the full picture. These are the people who did:
27 Jan, 10:10 PM UTC

@davidaxelrod
Pam Bondi asserts that “we would prefer not to be talking about” Burisma, but just HAVE to because the House managers raised it so much. Then she heads down conspiracy theory lane.
27 Jan, 09:43 PM UTC 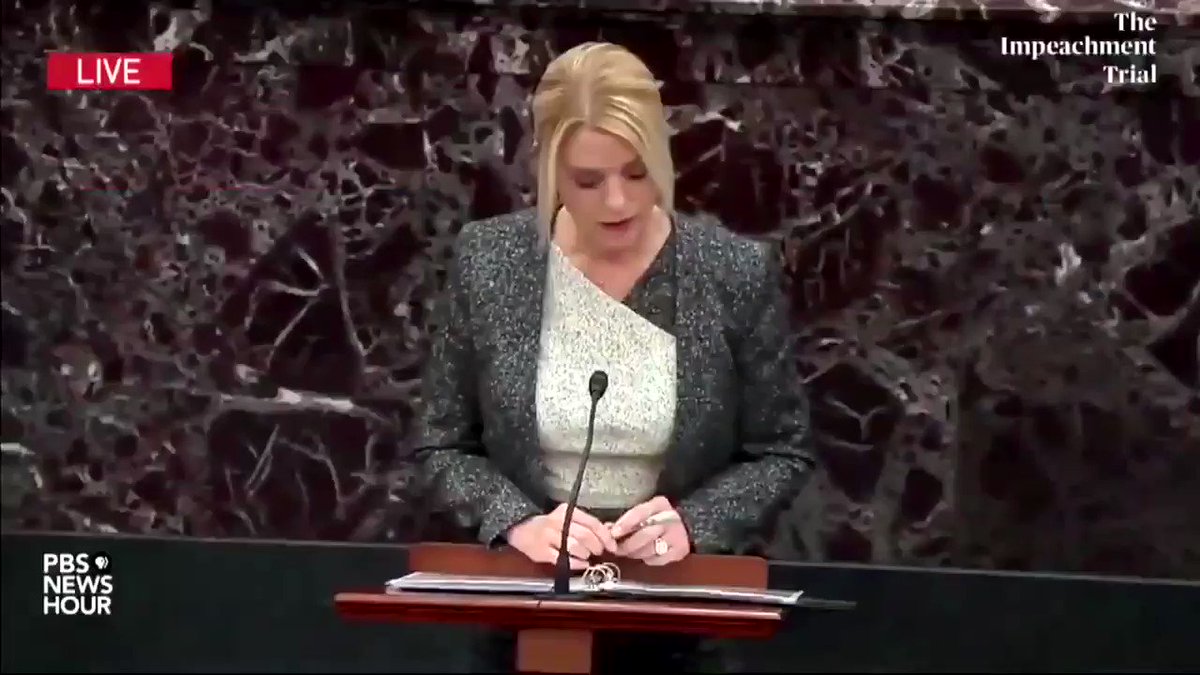 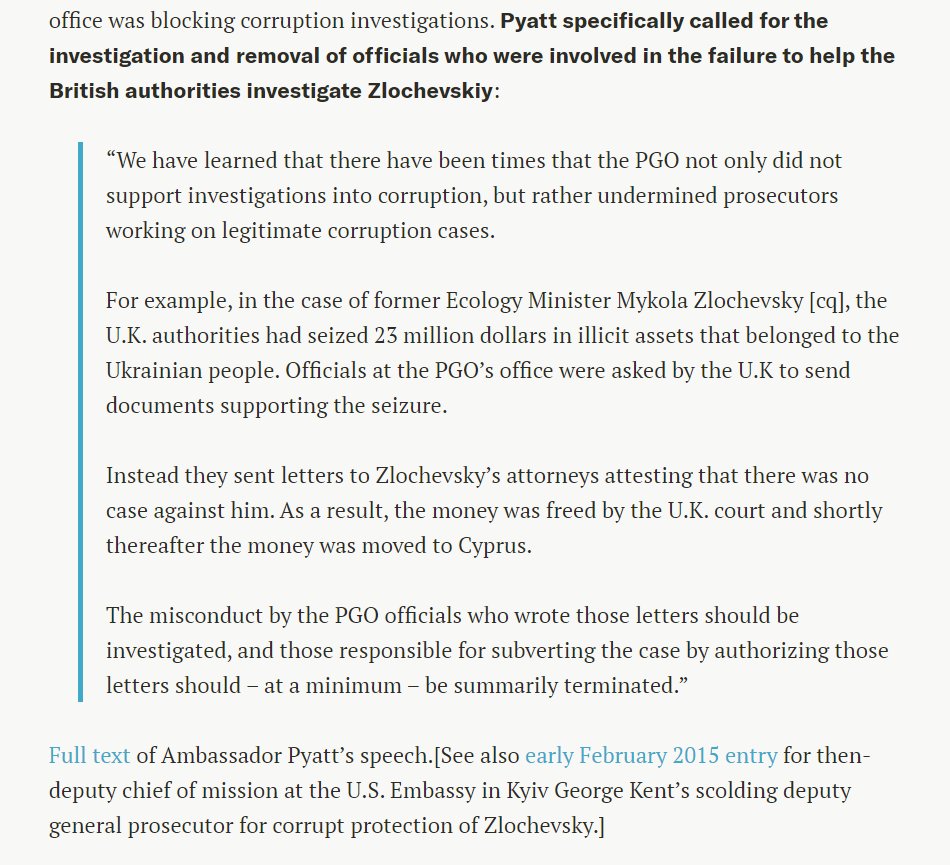 Karen Myatt
@karenamyatt
Bondi defends Trump by attacking Hunter for earning $1M on Burisma’s board. Biden is an atty w experience. Ivanka has no experience or degree. She made $82M last year. Haley was appointed to Boeing’s board. $300k/yr. She has no qualifications in aviation. What did I miss?
27 Jan, 09:57 PM UTC 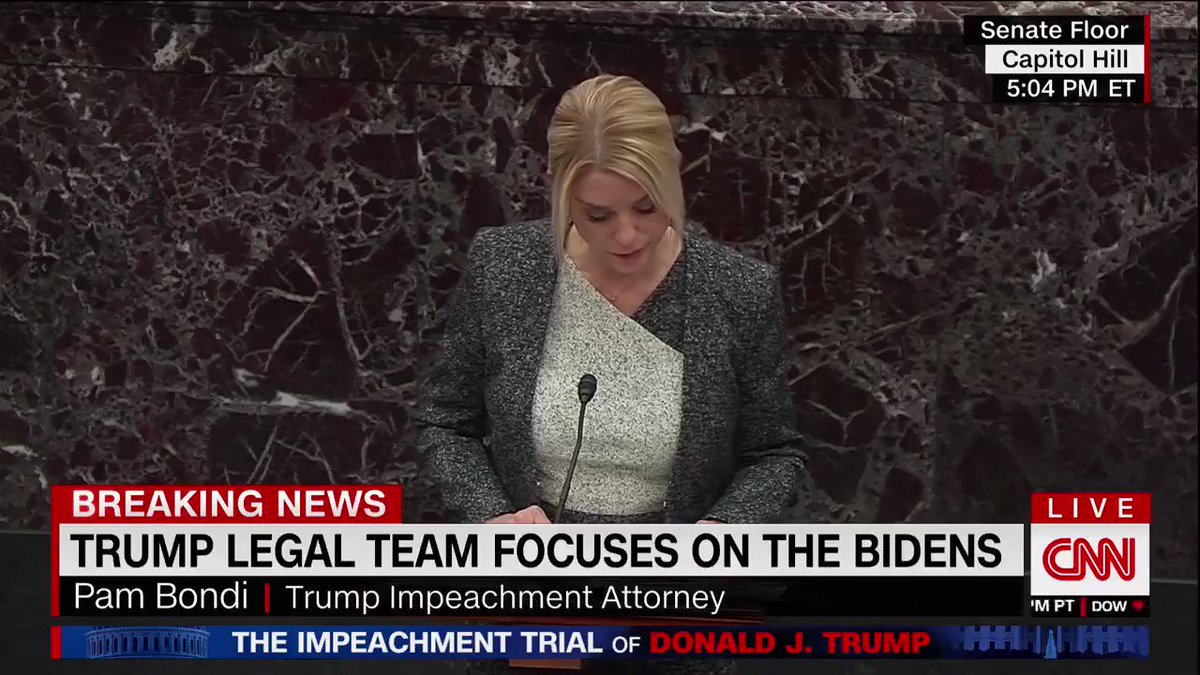 @JillWineBanks
Great and accurate point. If 45 cared about Ukraine corruption, why only ask for investigation of Burisma/Biden and Crowdstrike and why not start DOJ/FBI investigation? https://t.co/dNTyFYqkuR
27 Jan, 11:45 PM UTC

Shem Horne
@Shem_Infinite
Hunter Biden was paid significantly more than other Burisma board members from top companies in the US even though he had no known specific duties on the board other than attending meetings once or twice a year and had no experience at all. Devastating arguments by Pam Bondi.
27 Jan, 09:51 PM UTC