Cathie is trending on Twitter. Popular tweets on Cathie.

@APompliano
Cathie Wood explaining why bitcoin can serve as an inflation hedge. 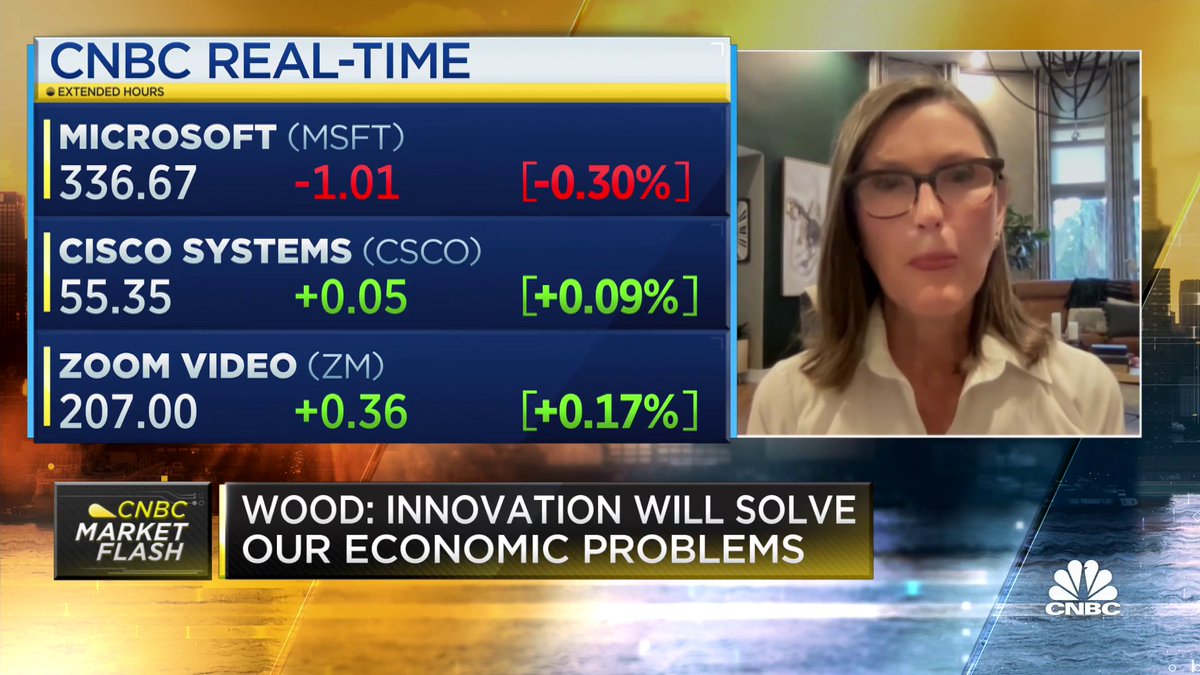 Special Situations
@rosemontseneca
Cathie Wood is a charlatan who hired young inexperienced journalists and called them Analysts … all her gains came from Tesla within a momentum equity bubble she called ‘disruption.’ people will regret owning her $ARKK fund once $TSLA cracks. this is 1999.
24 Nov, 12:05 PM UTC

@CNBC
Cathie Wood says her firm is testing a more aggressive strategy that would be 'ARK on steroids' https://t.co/m06VMViOKN
24 Nov, 12:25 PM UTC

@MarketRebels
Cathie Wood says @ARKInvest is testing a new portfolio that involves shorting companies in sectors that are being disrupted. She calls it “ARK on steroids”
24 Nov, 01:05 PM UTC

squawksquare
@squawksquare
Cathie is crazy regarding zoom. $ZM could close the doors today and people would have an alternative and operate as usual without their solution. They have no unique proposition.
24 Nov, 12:17 PM UTC

B Graham Disciple
@bgrahamdisciple
I am upgrading $ARKK to a core short position. I don’t think Cathie can easily recover from her awful performance in 2021, and I think the $ARKK portfolio is a tinder box loaded with illiquid positions that will crater if she has to start dumping when investors flee.
24 Nov, 12:03 PM UTC

Taylor Ogan
@TaylorOgan
21/ It’s frustrating when Cathie models out 20 million robotaxis each generating some ridiculous profit per vehicle beginning next year, but it’s utterly harmful to the value when those who know that’s not going to happen spread it.
23 Nov, 08:34 PM UTC

@mkmfitzgerald
With Wood's flagship fund down ~15% in 2021 and the S&P 500 up 25%, this new strategy could see some big losses @CathieDWood said in the next 5 years her strategy will be a winner as innovation companies further emerge and the older bellwethers fade away https://t.co/cNkVKUyzwf
24 Nov, 01:16 PM UTC

The Wealth Dad
@thewealthdad
$ARKK is now -0.03% YTD while the S&P 500 is +24.24% Not hating on $ARKK (and if you believe in Cathie & the holdings, could be a good buy opportunity now) but this can be the danger of plunging after the hype Once main street hears about it, the outsized gains are usually gone
24 Nov, 02:47 PM UTC

Rihard Jarc
@RihardJarc
Cathie Wood is sticking to her deflation call in the next 3-6 months. Not saying I agree with her but If she is right it will be a statement of itself. Everybody else is screaming inflation right now.
24 Nov, 02:58 PM UTC

Mike
@SavvyInsight
@CathieDWood internally testing a fund that bets against major stocks. Over the next five years it will be a huge winner as her innovation companies further emerge and the older bellwethers fade away I’m in! @ARKInvest Let’s get the symbol out https://t.co/yJaBKzho3r
24 Nov, 02:56 PM UTC

Teachemstoic
@teachemstoic
Cathie Wood made a good case for $ZM. It made me feel better about the market disagreeing so strongly with me on this company.
24 Nov, 02:43 PM UTC