@SportsCenter
Breaking: Charlie Morton is in agreement on a one-year, $15 million deal with the Atlanta Braves, sources tell @JeffPassan. 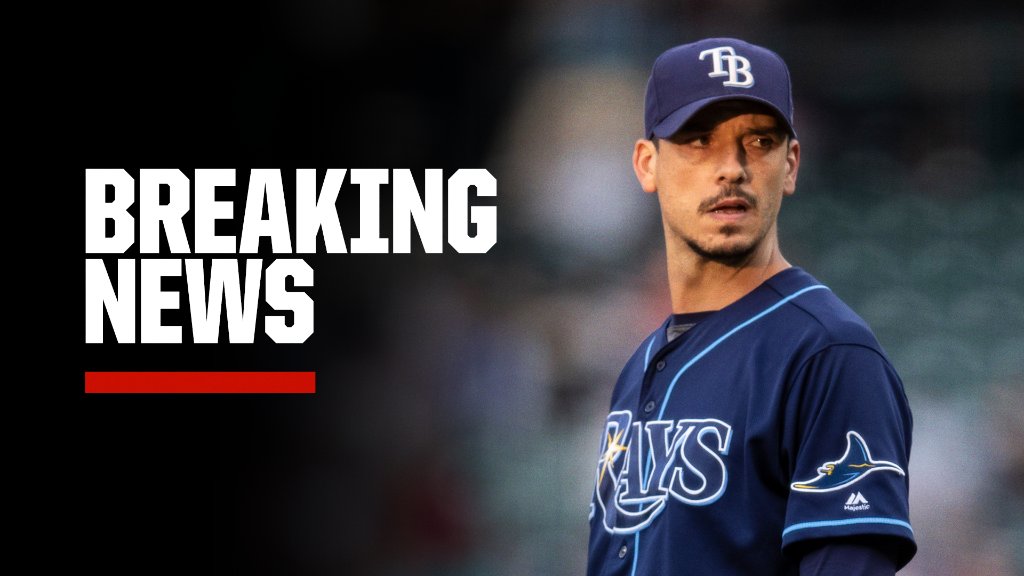 @Feinsand
BREAKING: Charlie Morton has agreed to terms on a one-year, $15 million deal with the Braves. The deal was negotiated by Andrew Lowenthal and BB Abbott of Jet Sports. It’s the largest free agent contract so far this offseason.
24 Nov, 02:14 PM UTC 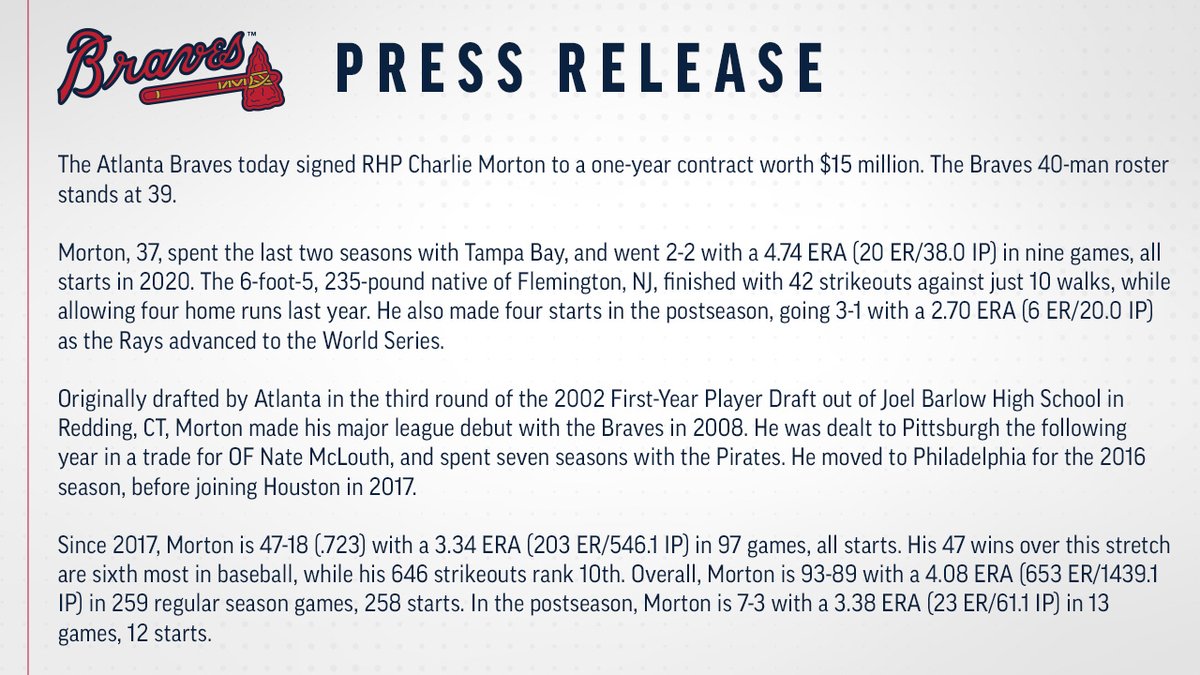 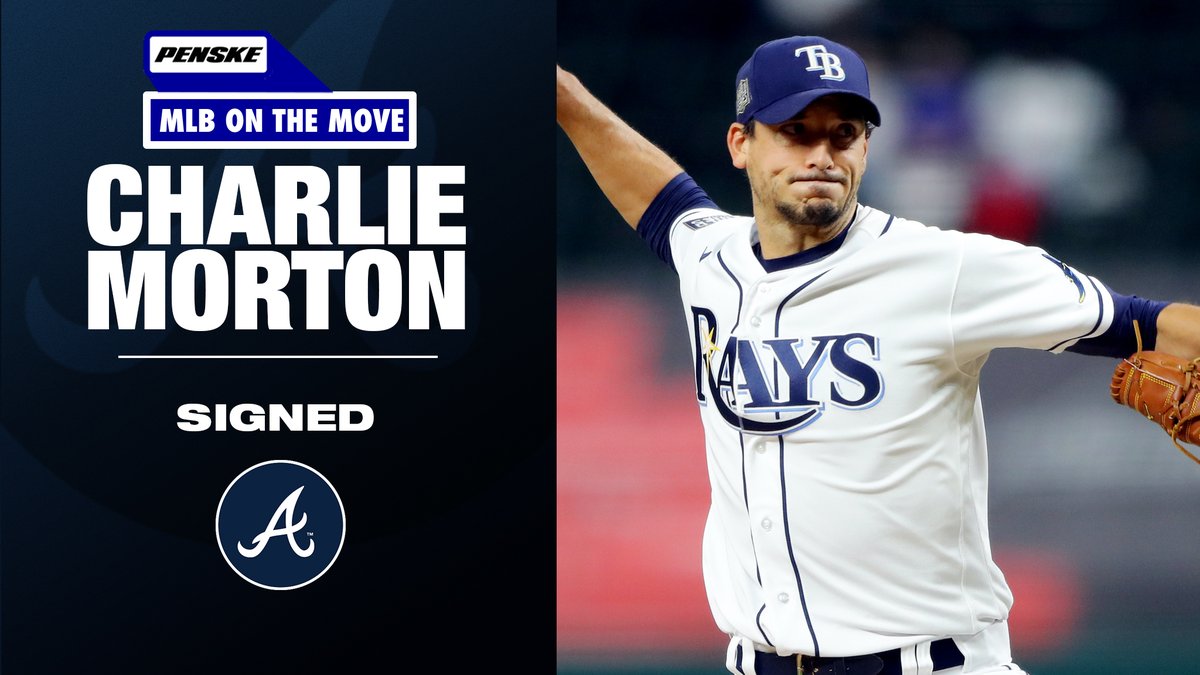 @JeffPassan
Charlie Morton is in agreement on a one-year, $15 million deal with Atlanta, sources tell ESPN. He's headed back to the team that drafted him in 2002 -- and gets the same money that Tampa Bay turned down when it declined its club option last months. @Feinsand had details first.
24 Nov, 02:17 PM UTC 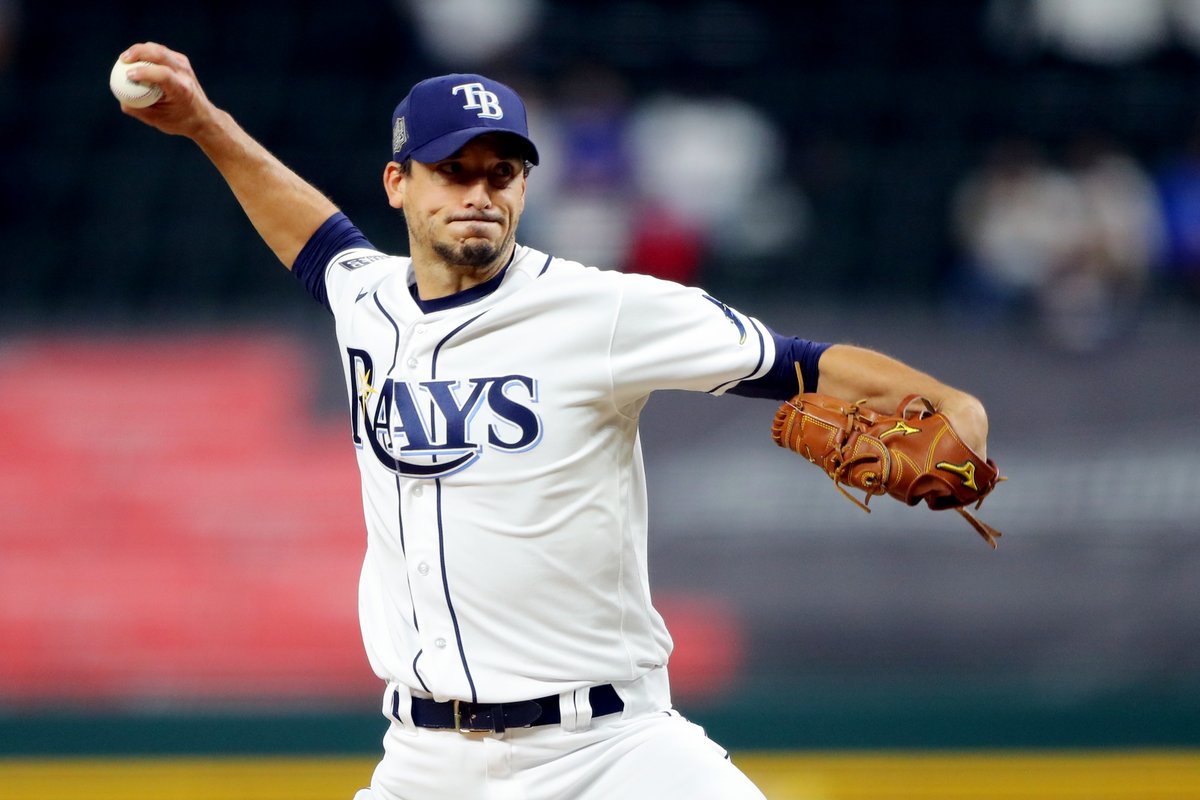 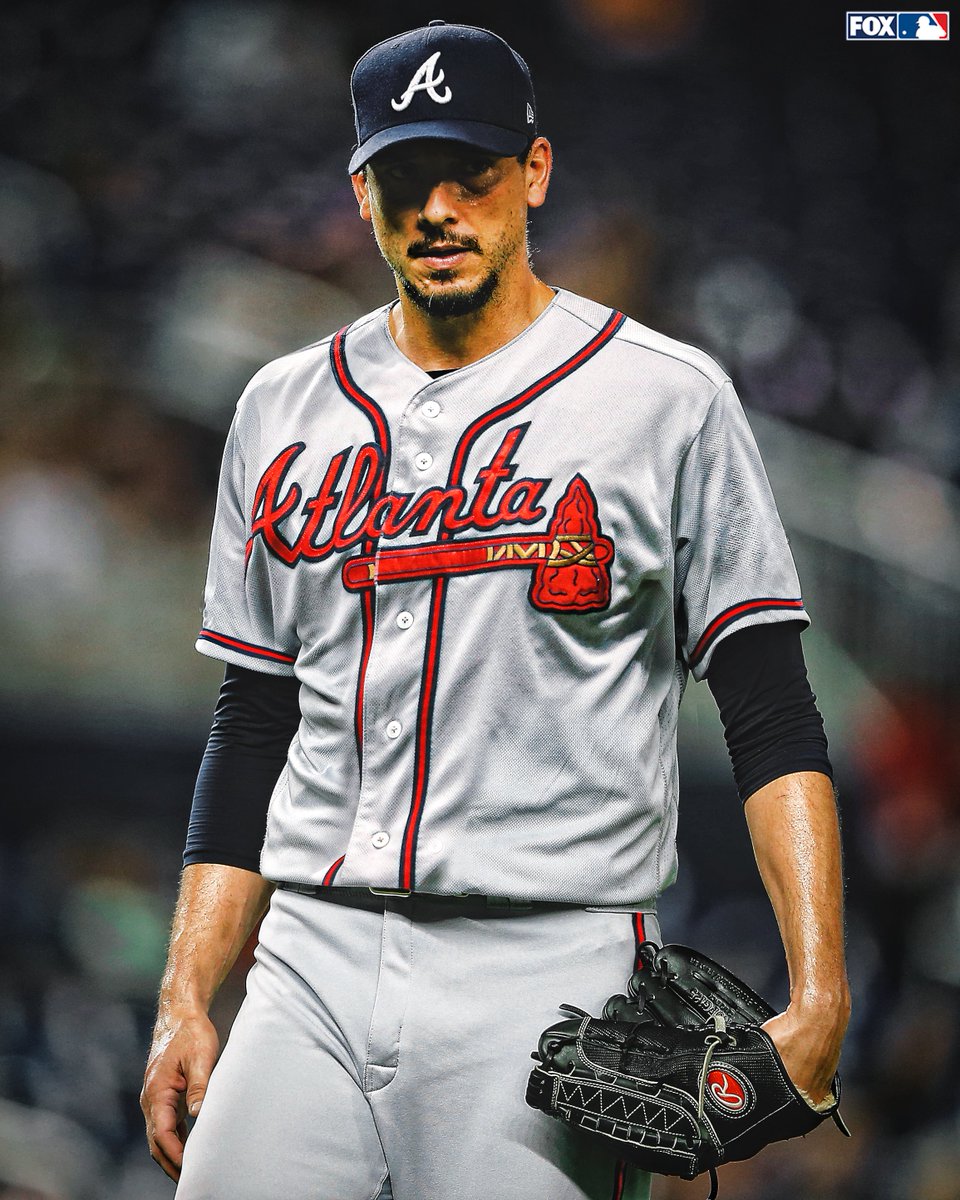 @SlangsOnSports
Charlie Morton made his MLB debut on June 14, 2008, pitching for the Braves at the Angels Here are the starting lineups from that game Some *very* fun names! ⬇️ 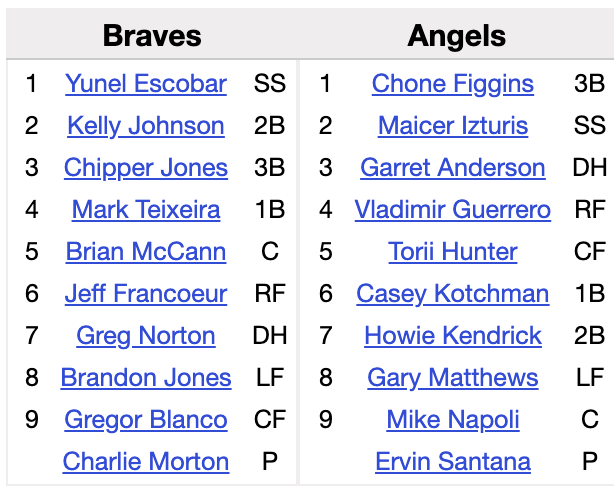 @FOXSportsSouth
That was fast. They already have Charlie Morton’s @Braves baseball cards made up. 😏 https://t.co/aOZiUli0co
24 Nov, 03:12 PM UTC 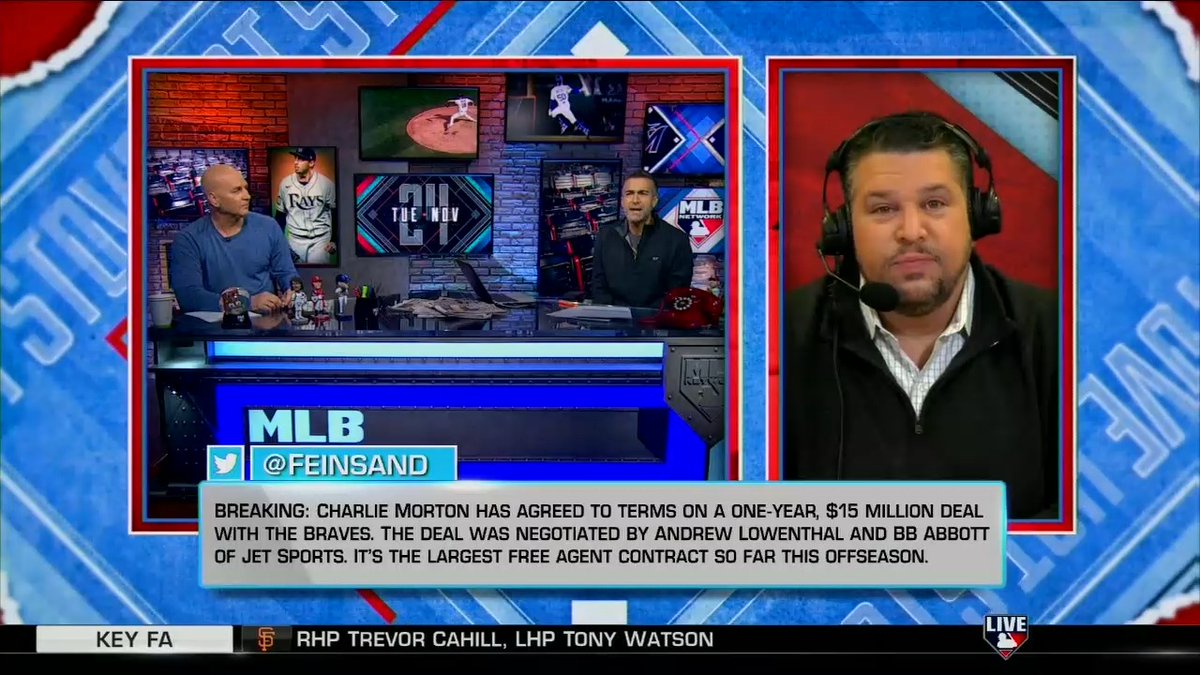 @DOBrienATL
#Braves' Alex Anthopuolos on bolstering rotation with Charlie Morton and Drew Smyly signings: "We had an extremely short list of guys we would consider, basically two to three. And obviously we got two. These were the two guys that were at the top of our list, Charlie and Drew."
24 Nov, 03:59 PM UTC

@enosarris
Charlie Morton is the best. On a 1yr deal, great. But a 5yr low in velo, even if he got a lot of it back in October, combined w/ shoulder stuff… combined w/ Smyly’s up & down career… possible regression from Soroka, Anderson, Fried… so many possible outcomes for Braves staff.
24 Nov, 05:12 PM UTC 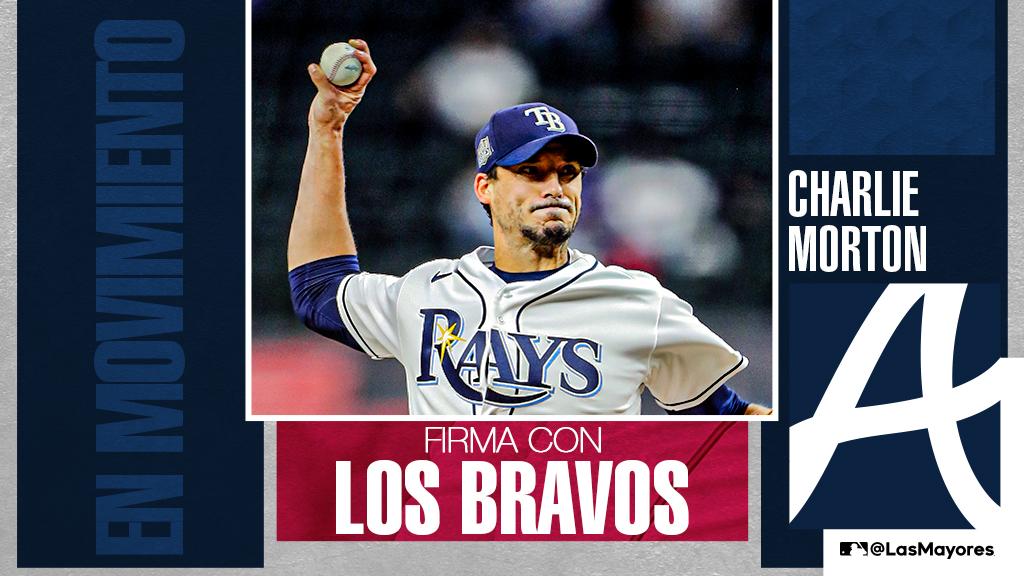 @InfieldChatter
Charlie Morton is headed to Atlanta. Since 2017, the new @Braves pitcher is 47-18, has twice been to the World Series & twice to the All-Star Game. But, his talent goes beyond baseball. 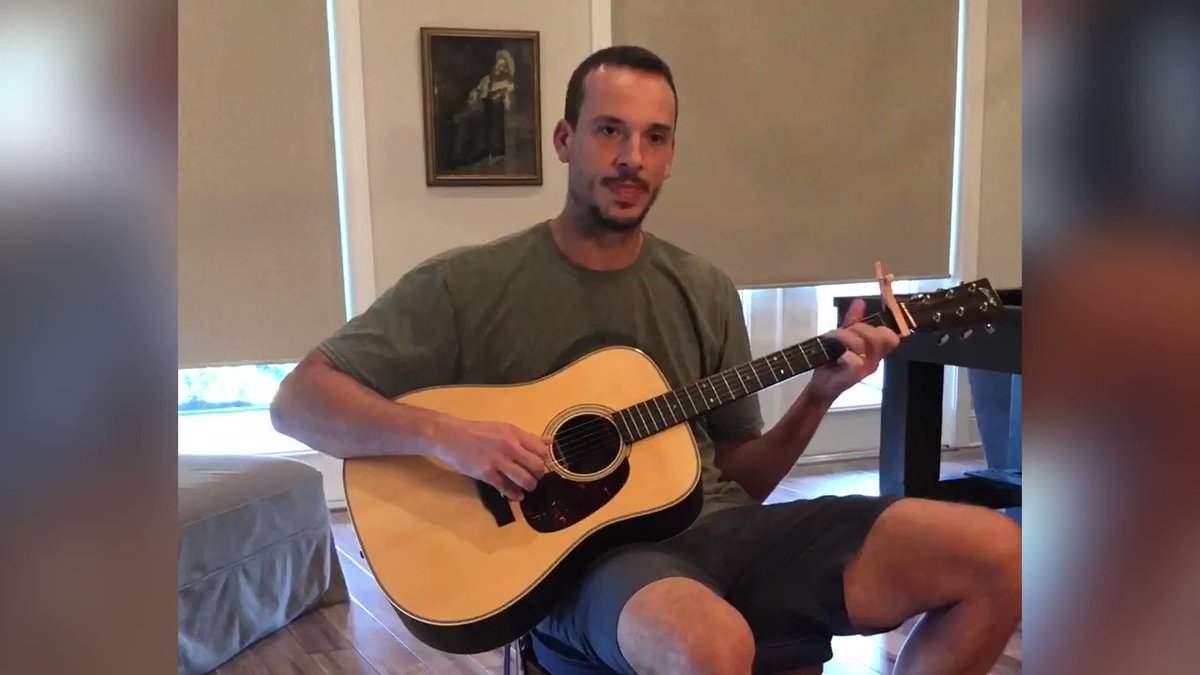 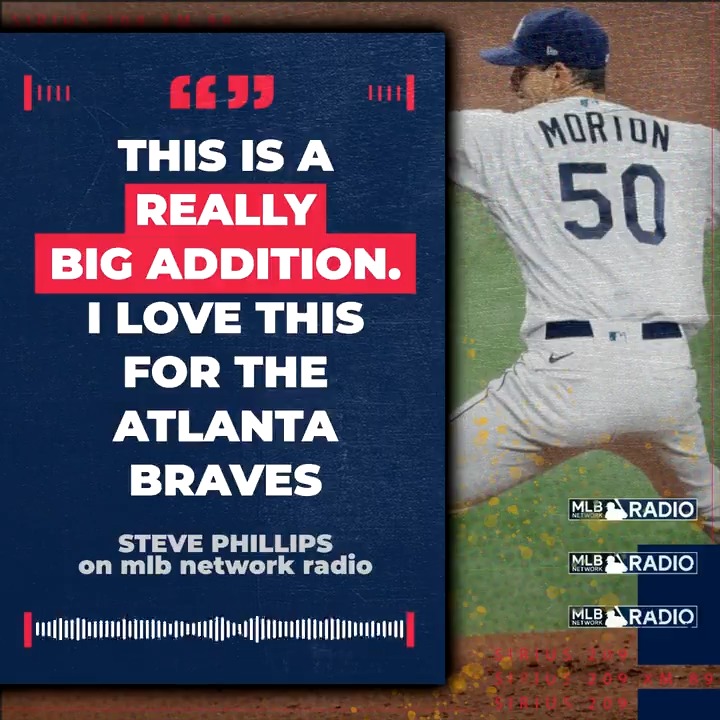 @mbraves
𝐇𝐞'𝐬 𝐛𝐚𝐜𝐤! Charlie Morton struck out 67 batters over six starts and 41 appearances for the M-Braves in 2007. 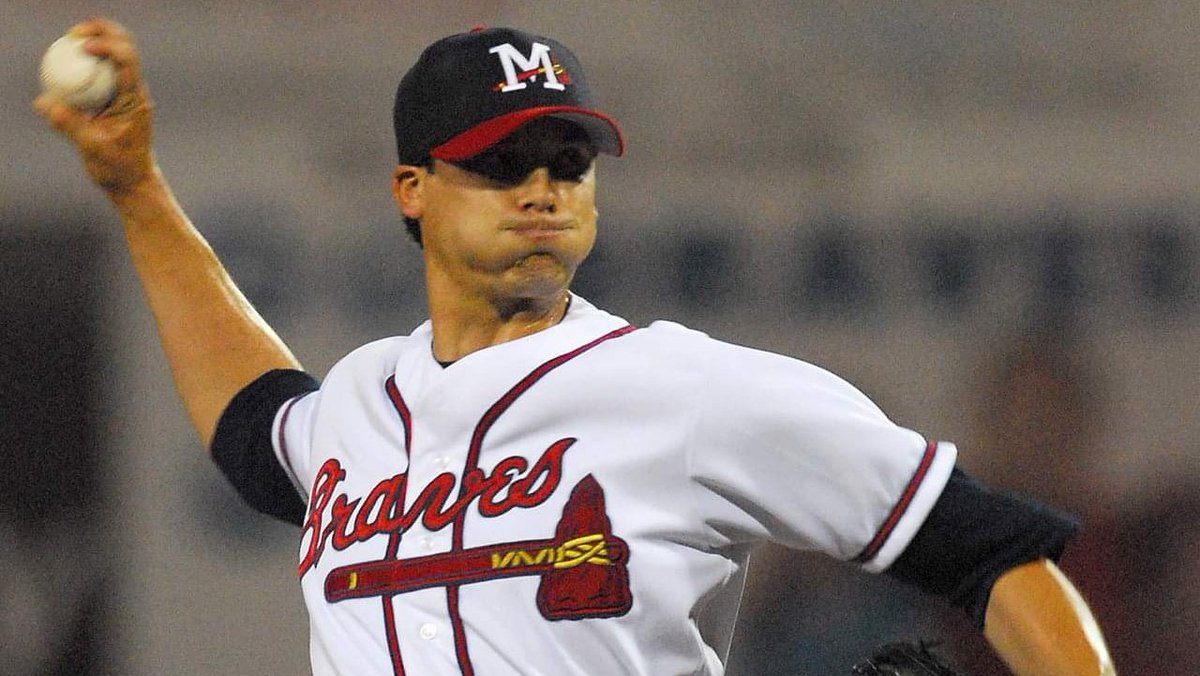 @thestevenwoods
I’m pretty sure @JasonIsbell is more excited about landing Charlie Morton than he would’ve been getting nominated for a well-deserved Grammy or 4.
24 Nov, 07:05 PM UTC