That Vaccinated Karen
@KarenVaccinated
@ltgovmcnally Nathan Bedford Forrest was a Confederate cavalry commander during the American Civil War. He and his troops were responsible for the massacre of Black Union troops stationed at Fort Pillow, Tennessee, in April 1864, and he was the first grand wizard of the Ku Klux Klan
22 Jul, 07:05 PM UTC 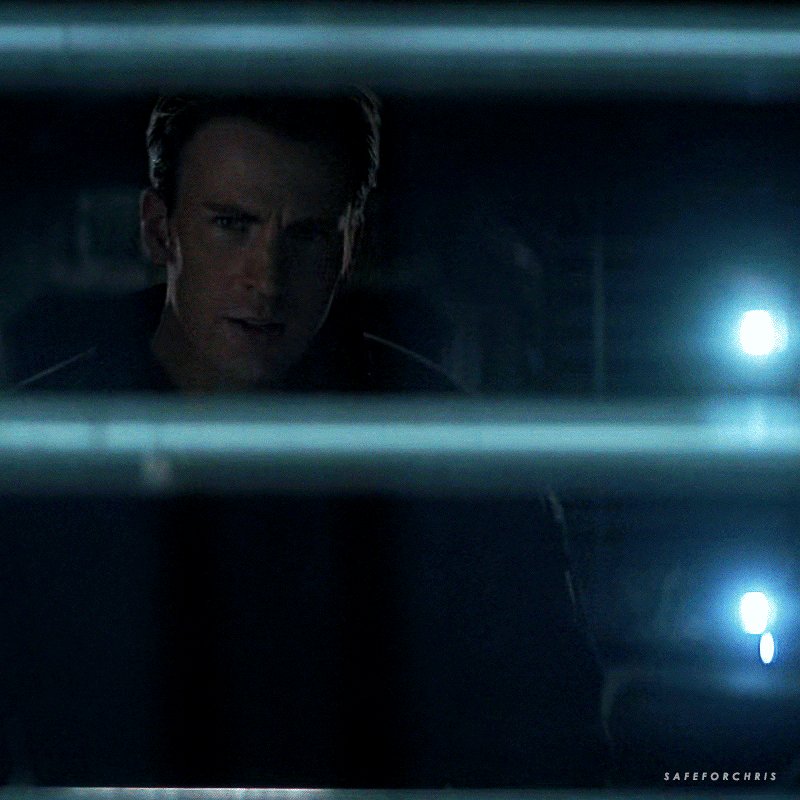 Onye Nkuzi
@cchukudebelu
In East Africa, the problem is "too many ports", in Nigeria, there's been a DELIBERATE effort, since the Civil War ended to make Lagos the only port of significance - since taking other ports seriously "empowers the former Eastern Region". So a nation of 200m depends on Cotonou.
22 Jul, 10:36 AM UTC

@UrbanAchievr
Anton's latest for Claremont handicaps a California vs. Texas civil war, with California losing because of its "long experiment with postmodern deracination and anti-masculinity." 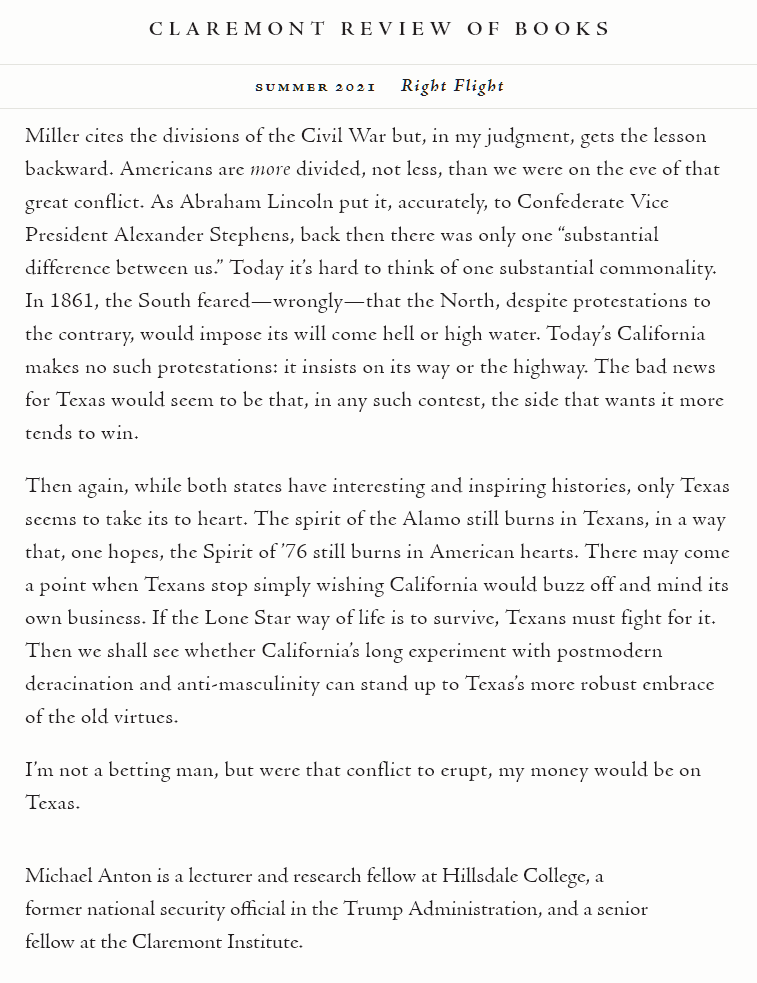 @CharlesPPierce
Because of the news of the day, I just watched the episode of Ken Burns' Civil War series where Shelby Foote talks about Nathan Bedford Forrest. Wow.
23 Jul, 01:33 AM UTC

@TimRunsHisMouth
Just to clarify for all the feds watching my page... the answer to the question "Want to get violent and Civil War?" is always going to be a hard No from me. Save yourself time by reading the hat. For everyone else, instablock and report people who ask those questions.
22 Jul, 11:21 PM UTC

It's Always Sebastian Stan
@PixieVixenV2
I was talking to my friend about Sebastian Stan joking around/also hinting he would like to play WWE wrestler Ric Flair at some point. Friend: "Yeah, but wasn't Ric Flair built?" Me: "🤨 Did you even SEE Civil War?" I rest my case. #SebastianStan #BuckyBarnes #RicFlair https://t.co/6DpqNP9ldl
22 Jul, 06:00 PM UTC

Catie Lilly
@catielila
All I ask for the rest of my life is that @QuincyInst stop giving platforms to people who make the most specious historical analogies about Taiwan. If the People's Republic of China *has never ruled Taiwan* how is the China-Taiwan relationship even comparable to the US Civil War? https://t.co/Mro1bLc4lR
22 Jul, 04:50 PM UTC

Aaron Astor
@AstorAaron
Fort Pillow is trending...Not sure how many people have actually visited Fort Pillow, BTW. It's one of the few Civil War sites that feels, for lack of a better word, haunted. That is because of the massacre of USCT there by Forrests's troops in April 1864. But also bc the locale. https://t.co/IsqQbty2HS
22 Jul, 11:05 PM UTC

Patrick S. Tomlinson
@stealthygeek
Spoilers: Anyone who studies American history recognizes the inescapable fact of a persistent, foundational strain of authoritarianism weaving its way through our tapestry. That strain launched the Civil War. It created the KKK. It supported Hitler. And voted for Trump. Twice.
23 Jul, 01:37 AM UTC

@MSF
On 9 July 2021, #SouthSudan marked its 10th birthday. A milestone marred by the bloody legacy of its first decade, including a five-year civil war. This @MSF report provides a record and reminder of the human toll of violence since independence. @MSF on Civil War">https://t.co/5DH7qbzbbe
22 Jul, 12:01 PM UTC

Gary
@BlueWaterDays
Its civil war in America and the govts latest weapon against us is the COVID vaccine.
23 Jul, 12:47 AM UTC

ZionistCommand
@ZionistCommand
IS #LEBANON CLOSE TO CIVIL WAR? Lebanese Political Activist Naji Hayek: If the Lebanese Army fails to protect us, we have men who are ready to take up arms; we will accept weapons from whoever offers them, even from #Israel #MEMRI #Breaking https://t.co/1nOTmJ8r8U
23 Jul, 01:30 AM UTC

கண்ணம்மா
@KurwaThi
1983 - Black July anti-Tamil pogrom, Sri Lanka - pogrom committed against Tamils of where between 400 and 3,000 Tamil civilians were killed and many more made homeless and refugees. This was believed to be the origin of the Sri Lankan Civil War. #அறிவோம்ஈழம் https://t.co/CF1zF6BqTm
23 Jul, 01:10 AM UTC

Ken Young
@Pappapyoung
@jmbenson1491 The people need to see the footage from all the security cams in our Capitol. I'm guessing the truths found in all the security footage will not support narritive that event was worst threat to USA than Civil War. We paid for it, let us see it so we can agree or disagree.
23 Jul, 01:44 AM UTC

Jim Benson
@jmbenson1491
When a hyperbolic statement like that event was equivalent to the Civil War, it hard to back that up considering nobody was armed or injured save Ashli Babbitt.. https://t.co/5vn2CaZfGc
23 Jul, 01:47 AM UTC

N.N. Scott
@Seaweed_Shark
@brettmerrell @CharlesPPierce One of the weird things about Burns' "Civil War" is that Foote, who got more than 40 minutes of screen time throughout the series, wasn't an academic. He wrote popular history books heavily dependent on traditional 19th century accounts. But he looked and talked great on TV.
23 Jul, 01:50 AM UTC

Mat Westhorpe
@Freebooted
I had a great time trying (& barely succeeding) to stay in character for this @huttonorbital interview about my recent #EliteDangerousOdyssey incarcerations & attempts to light the fuse of civil war in a remote frontier system. Thx guys #EliteDangerous https://t.co/YWe01KxJtx
23 Jul, 12:35 AM UTC

Julianne ✝️ ‏
@KindeandTrue
@JonahofNinevah Civil war at home, and in the Church.
23 Jul, 12:48 AM UTC

N.N. Scott
@Seaweed_Shark
@CharlesPPierce Barbara J. Fields, historian, in the last episode: "What we need to remember most of all is that the Civil War is not over until we, today, have done our part in fighting it... The Civil War is still going on, it’s still to be fought, and, regrettably, it can still be lost."
23 Jul, 01:56 AM UTC

Mark Dery
@markdery
Whatever you're doing, unless it's open-heart surgery or landing an Airbus, drop it, and listen--I beg you--to this absolutely riveting Terry Gross interview with @TheAtlantic's Ron Brownstein about the GOP's Second Civil War on democracy: https://t.co/WUkRPuaMCP
23 Jul, 01:48 AM UTC

Champagne WorthingTober
@blakealbers
@hfrfromthefloor We are gonna have a civil war over a vaccine aren’t we...
23 Jul, 01:57 AM UTC