@GeoffRBennett
The federal government says it seized by court order $2.3 million of the ransom paid by Colonial Pipeline. The FBI had the password to the hackers' Bitcoin account, @PeteWilliamsNBC reports. “Today we turned the tables on DarkSide,” says Deputy Attorney General Lisa Monaco.
07 Jun, 07:19 PM UTC

@NatashaBertrand
Breaking: US investigators have recovered millions of dollars in cryptocurrency paid in ransom to hackers whose attack prompted the shutdown of Colonial Pipeline. DOJ today is expected to announce details of the operation led by the FBI. via @evanperez https://t.co/tgYx9Xui3w
07 Jun, 06:30 PM UTC

@mmpadellan
It's a pretty big deal that the DOJ recovered millions in crypto currency paid by Colonial Pipeline to hackers. An even BIGGER deal would be to stop the hacking from happening in the first place.
07 Jun, 08:09 PM UTC

Lindy Li
@lindyli
Great that the Justice Department was able to recover some of the ransom paid by the Koch-owned Colonial Pipeline How about recovering some of the catastrophic damage done to American democracy by Koch Industries?
07 Jun, 08:19 PM UTC

@glennkirschner2
DOJ Holds Press Conference on Colonial Pipeline Case - Remains Silent on Investigation into those who Funded, Organized and Incited the Deadly Insurrection. DOJ needs to update and reassure the American people. Because #JusticeMatters https://t.co/P2werzOJfp via @YouTube
07 Jun, 11:11 PM UTC

@tribelaw
“The seizure on Monday marked a first-of-its-kind effort by the Justice Department to hijack a cybercriminal group’s profits through a hack of its Bitcoin wallet.” Huge props to Joe Biden and Merrick Garland’s DOJ! https://t.co/WItWZxEI9V
07 Jun, 08:21 PM UTC

Mr. Whale
@CryptoWhale
Bitcoin is plunging after it was revealed that the FBI retrieved millions worth of #Bitcoin from the Colonial Pipeline ransom attack. This has raised many concerns over the security of the $BTC network and how exactly they cracked the private keys.
07 Jun, 09:25 PM UTC

@UberFacts
The FBI has successfully tracked and recovered millions of dollars in cryptocurrency paid as ransom to the Colonial Pipeline hackers
07 Jun, 06:37 PM UTC

@MSNBC
BREAKING: Justice Department announces it has recovered a majority of ransom paid to DarkSide hacker group in Colonial Pipeline hack. "Ransomware attacks are always unacceptable, but when they target critical infrastructure, we will spare no effort in our response." 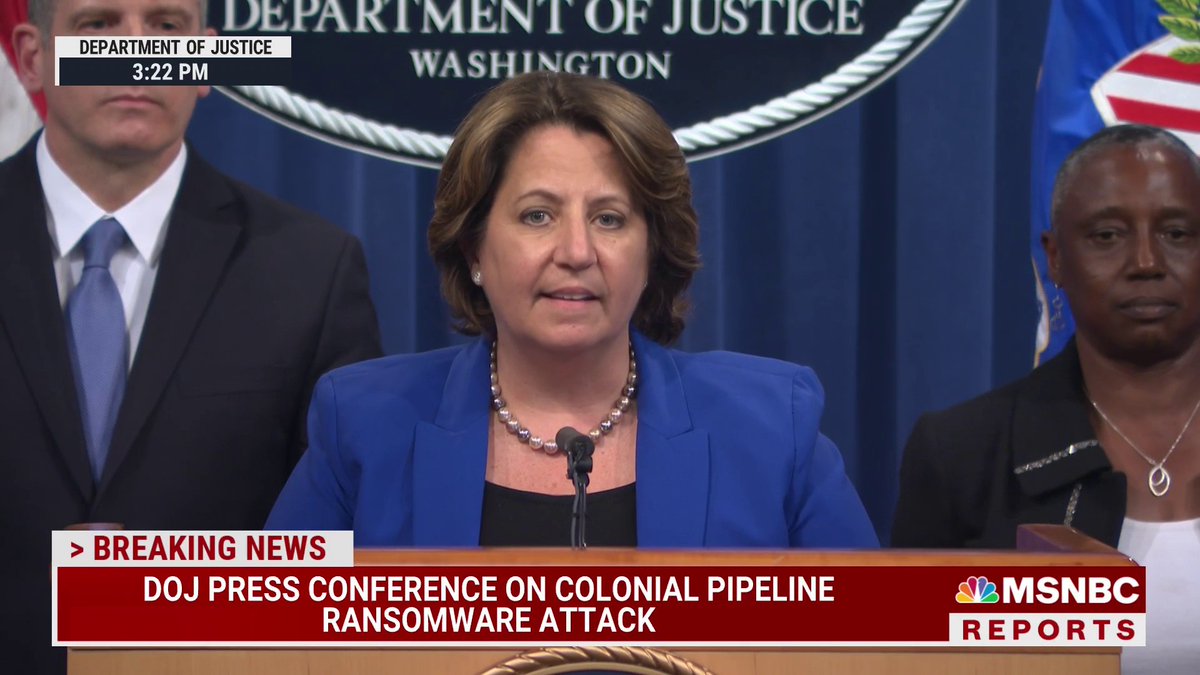 Disclose.tv 🚨
@disclosetv
US feds seized $2.3 of $4.4 million Colonial Pipeline ransom from a #Bitcoin wallet pursuant to an order from a federal court.
07 Jun, 07:33 PM UTC

@cnnbrk
The US has recovered millions of dollars in ransom paid to hackers who prompted a key East Coast pipeline to shut down last month https://t.co/Y8yRD410AG
07 Jun, 06:34 PM UTC

TheSadTruth💙
@ReportsDaNews
BREAKING: The FBI has recovered millions in cryptocurrency paid by Colonial Pipeline to the hackers.
07 Jun, 06:43 PM UTC

@JordanSchachtel
The Russian hacking claim has been used illegitimately so many times in recent years that it's impossible to know if the feds are being truthful about these matters. Messaging about the Colonial Pipeline incident is a total mess. Have no idea what to believe about this.
07 Jun, 07:50 PM UTC

Alex Thorn 🎲
@intangiblecoins
regarding the darkside / colonial pipeline ransom, we looked on-chain & found a pattern that seems to show the funds ultimately flowed to a trading desk or exchange willing to comply with a US warrant. there’s no evidence of a #bitcoin or bitcoin wallet security vulnerability👇🏼
08 Jun, 01:20 AM UTC

@harrylitman
Excellent, quick work. Feds recover millions in ransomware paid by Colonial Pipeline. Not easy and a real blow against both the hackers and Russia. DAG Lisa Monaco: “the old adage, follow the money still applies.” “Today we turned the tables on DarkSide.”
08 Jun, 01:59 AM UTC

Autism Capital 🧩
@AutismCapital
Regarding the Colonial Pipeline, what kind of stupid fucking hackers demand a ransom in *BITCOIN*, then send it to COINBASE to cash out. The whole thing makes absolutely no sense. Elite *RUSSIAN* hackers were this stupid? Don't buy it for one nanosecond. Stinks to high heaven.
07 Jun, 11:49 PM UTC

@briankrebs
Justice Dept. says it seized $2.3M in cryptocurrency paid to the Darkside ransomware gang by Colonial Pipeline. https://t.co/sLMRa9mCMQ On May 14, Darkside closed up shop, saying its bitcoin stash had been plundered https://t.co/aNkVt5NQfv
07 Jun, 08:33 PM UTC

@CNN
US investigators have recovered millions in cryptocurrency they say was paid in ransom to hackers whose attack prompted the shutdown of the key East Coast pipeline last month, the Justice Department says https://t.co/E7Tbc97sXw
07 Jun, 11:46 PM UTC

Philip Martin
@SecurityGuyPhil
1/ I've seen a bunch of incorrect claims that Coinbase was involved in the recent DOJ seizure of bitcoin associated with the Colonial Pipeline ransomware attack. We weren’t. a thread:
08 Jun, 01:48 AM UTC

@CNN
Colonial Pipeline Company President and CEO Joseph Blount said he is grateful for the FBI's "swift work and professionalism" in responding to a ransomware hack on the pipeline last month https://t.co/F25AZLYDUm
07 Jun, 11:47 PM UTC

Nash Across the 8th Dimension
@Nash076
This isn't actually a victory. Because of the volatility of the crypto market, the ransom that was paid in Bitcoin is now worth half. Half of the money they paid just fucking disappeared into smoke, no one gets it, not the company, not the ransomers. https://t.co/N4sv5bMq8B
08 Jun, 04:45 AM UTC

Cointelegraph
@Cointelegraph
A U.S. government task force recovered $2.3M, that's roughly 64 BTC, from the Colonial Pipeline ransom. How did they do it? https://t.co/a7lt6BriTD
08 Jun, 05:30 AM UTC