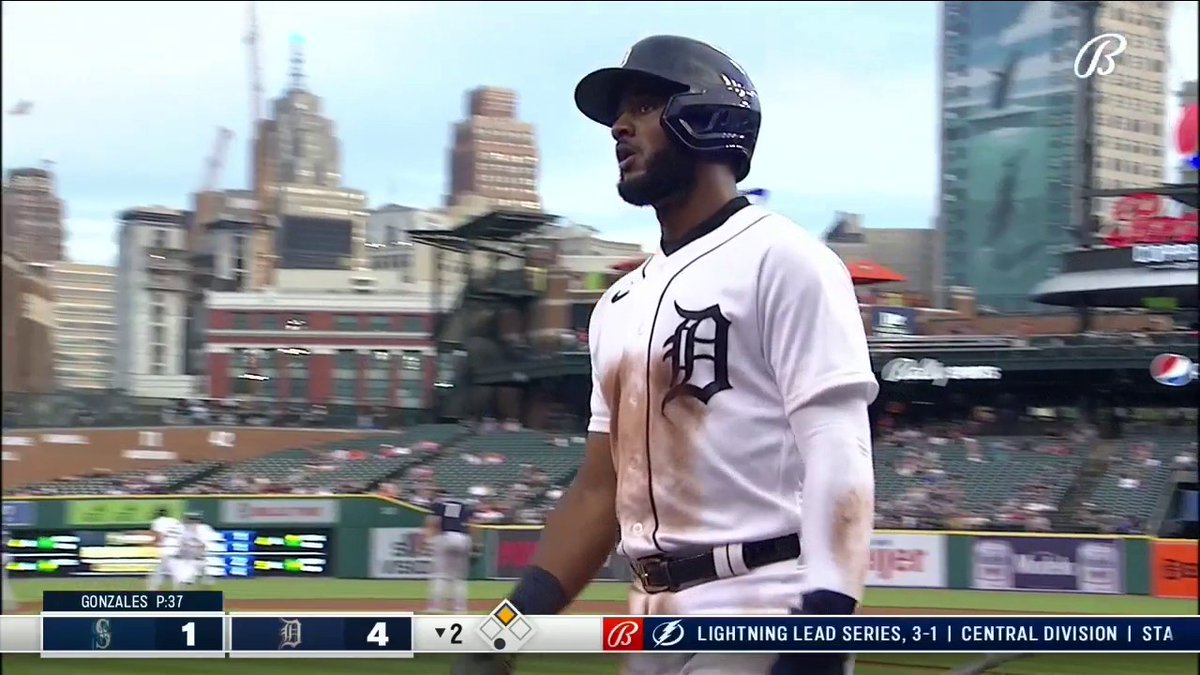 @CodyStavenhagen
What a catch from Derek Hill at the CF wall. And now he's leaving the game with what looks like a right shoulder injury. This one is on me. Talked to Hill before the game, said I didn't want to jinx him, but he talked about how thankful he was to finally be healthy. ...
09 Jun, 11:17 PM UTC

Barstool Detroit
@BSMotorCity
What. A. Play. He walked off the field under his own power afterward, but get well soon Derek Hill #DetroitRoots https://t.co/JNqgmneVDk
09 Jun, 11:22 PM UTC

@beckjason
Derek Hill's second highlight catch in as many nights, this one at the CF wall, came at a price. He's down after slamming into the wall to take a hit away from Kyle Seager.
09 Jun, 11:15 PM UTC

@beckjason
Looked on replay like Derek Hill's right shoulder took the brunt of his impact against the wall. Even with padding, that's a shot. Akil Baddoo replaces him in CF.
09 Jun, 11:17 PM UTC

Dan Clynick
@dclynick66
Derek Hill makes an outstanding catch against the wall in deep centerfield but something happens to him upon making impact with that wall. Baddoo comes in to replace him. I certainly hope that everything's okay with Derek Hill. 🤞 🙏 #DetroitRoots https://t.co/4aZkAyqtPL
09 Jun, 11:20 PM UTC

Chris McCosky
@cmccosky
Derek Hill just made a great running catch crashing into the CF wall and he's down. Look like hurt his right shoulder. Trainer out.
09 Jun, 11:15 PM UTC

Detroit Tigers Minor League Tracker
@Tiger_Lifer
This is vintage Derek Hill. Plays with reckless abandon every time out. It’s part of what makes him special but also makes you hold your breath every game. https://t.co/ZOKGb51KfG
09 Jun, 11:17 PM UTC

don kelly enthusiast
@donniekellybaby
Derek Hill is really showing that he can make on impact on the Tigers. Which of course means he will be hurt.
09 Jun, 11:17 PM UTC

@EvanPetzold
Derek Hill makes an incredible catch at the center field wall. But he is down on the warning track. Athletic trainer Doug Teter is making the jog to the outfield.
09 Jun, 11:14 PM UTC

tigermike1975
@tigermike1975
Mize gets through the first plunking two batters and taking out Derek Hill sending him to the wall on a 400+ foot shot. He seemed to settle in a bit against Fraley to end the inning.
09 Jun, 11:24 PM UTC

The AJ Hinch Tigers
@DetroitSTANS
I’m sorry. What the *fuck* did Jack Morris just say? I’m pretty positive he essentially implied Derek Hill got hurt because of his glove placement? (While he was in the process of making in INSANE / bordering HR-robbing acrobatic catch) ….???? https://t.co/fj1QQ7mQRw
10 Jun, 12:08 AM UTC

Ghostface Killian
@NateDog10000
@TigersJUK Shep and Morris really goin off tonight. Morris laughed at Derek Hill running into a wall and being on the ground for minutes and now they won't stop announcing how many putouts outfielders had last night as a measure of a good game
09 Jun, 11:36 PM UTC

Detroit, Tank City
@DetroitTankCity
That was truly a brilliant catch by Derek Hill. Made moreso by the sacrificing of his body to make it. Hope he's not seriously injured. #Tigers
09 Jun, 11:18 PM UTC