@nhannahjones
I was invited to give an MLK speech today and a small number of members of the group hosting me wrote and then leaked emails opposing my giving this speech, as it dishonored Dr. King for me to do so. They called me a "discredited activist" "unworthy of such association with King"
17 Jan, 09:20 PM UTC

@DanRather
A lot of people are quoting Dr. King today to justify actions that are an insult to his legacy. If he were alive today, these same hypocrites would be vilifying him on Fox News.
17 Jan, 08:02 PM UTC

@BernieSanders
Let us not forget where Dr. King was when he was assassinated. He was marching with exploited sanitation workers in Memphis, Tennessee who were underpaid and working under terrible conditions.
17 Jan, 06:23 PM UTC

@ReverendWarnock
You cannot remember Dr. King and dismember his legacy at the same time. To celebrate him is to support voting rights, a livable wage, and health care.
17 Jan, 07:47 PM UTC

@nhannahjones
I left them with this: People who oppose today what he stood for back then do not get to be the arbiters of his legacy. The real Dr. King cannot be commodified, homogenized, and white-washed and whatever side you stand on TODAY is the side you would have been back then.
17 Jan, 09:36 PM UTC

@nhannahjones
So, I scrapped my original speech and spent the entire first half of it reading excerpts from a bunch of Dr. King's speeches, but without telling anyone that I was doing so, leading the audience to think King's words were mine. And, whew, chile, it was AMAZING.
17 Jan, 09:21 PM UTC

@robreiner
Dr. King gave his life for Justice, Equality, and Voting Rights. Kevin McCarthy has no right to praise Dr. King then deny people of color their right to vote. I’m sick of these fucking hypocrites.
18 Jan, 06:32 AM UTC

@POTUS
Living up to his legacy, and what Dr. King believed our nation could become requires more than just reflection — it requires action. That is why the Congress must pass Federal legislation to protect the right to vote. 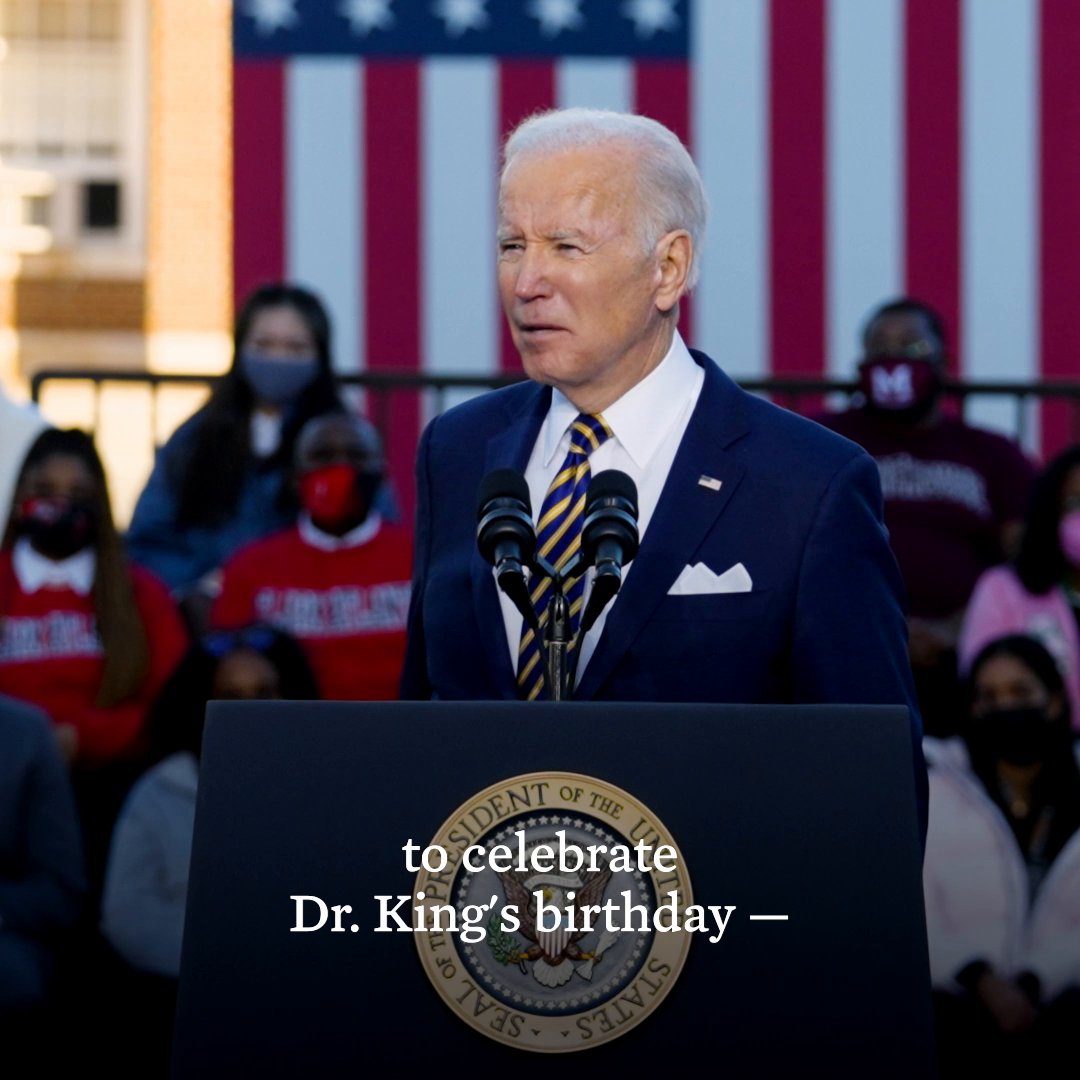 @BernieSanders
Dr. King was a great civil rights leader, but he was more than that. He was a political revolutionary who summoned the nation to “undergo a radical revolution of values” to overcome “the giant triplets of racism, extreme materialism, and militarism.” Never forget his vision.
17 Jan, 08:31 PM UTC

@RBReich
Today seems like a good day to remind some people that refusing to get vaccinated doesn't make you Rosa Parks or Dr. King.
17 Jan, 05:40 PM UTC

@TPostMillennial
Biden: “Even Dr. King’s assassination did not have the worldwide impact that George Floyd’s death did.” 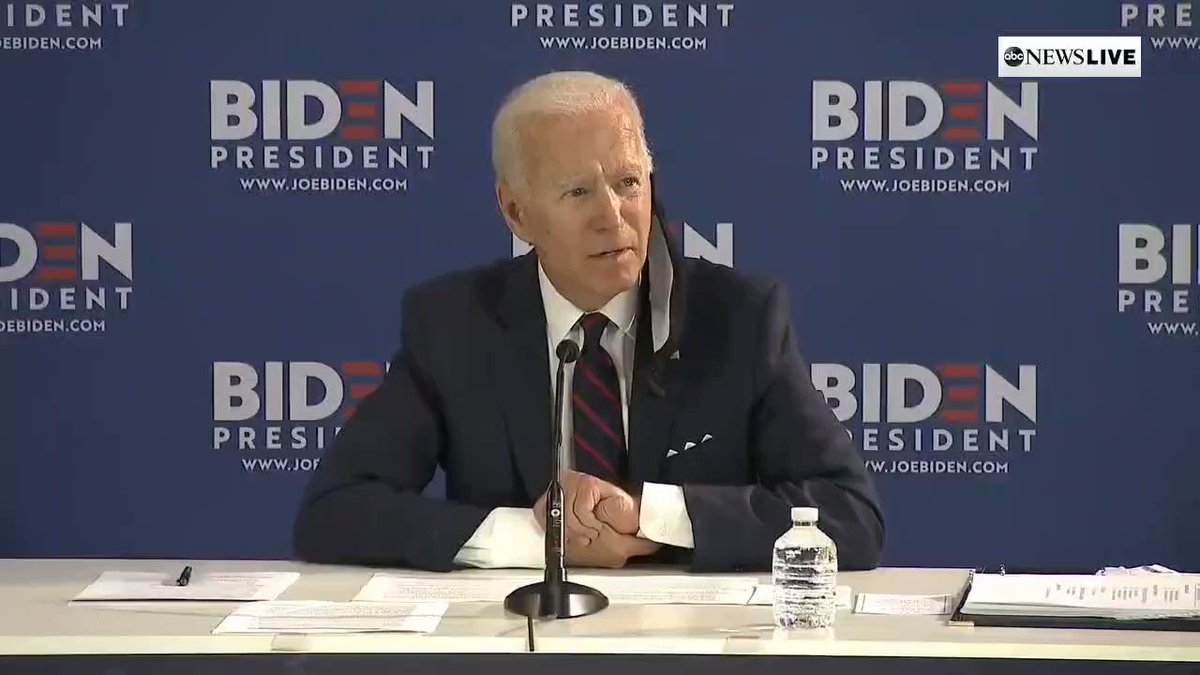 @VP
Dr. King taught us that a life of service to others is our duty and it is a cycle that strengthens us all. Today @SecondGentleman and I visited Martha’s Table in Washington, D.C. to volunteer for a day of service. 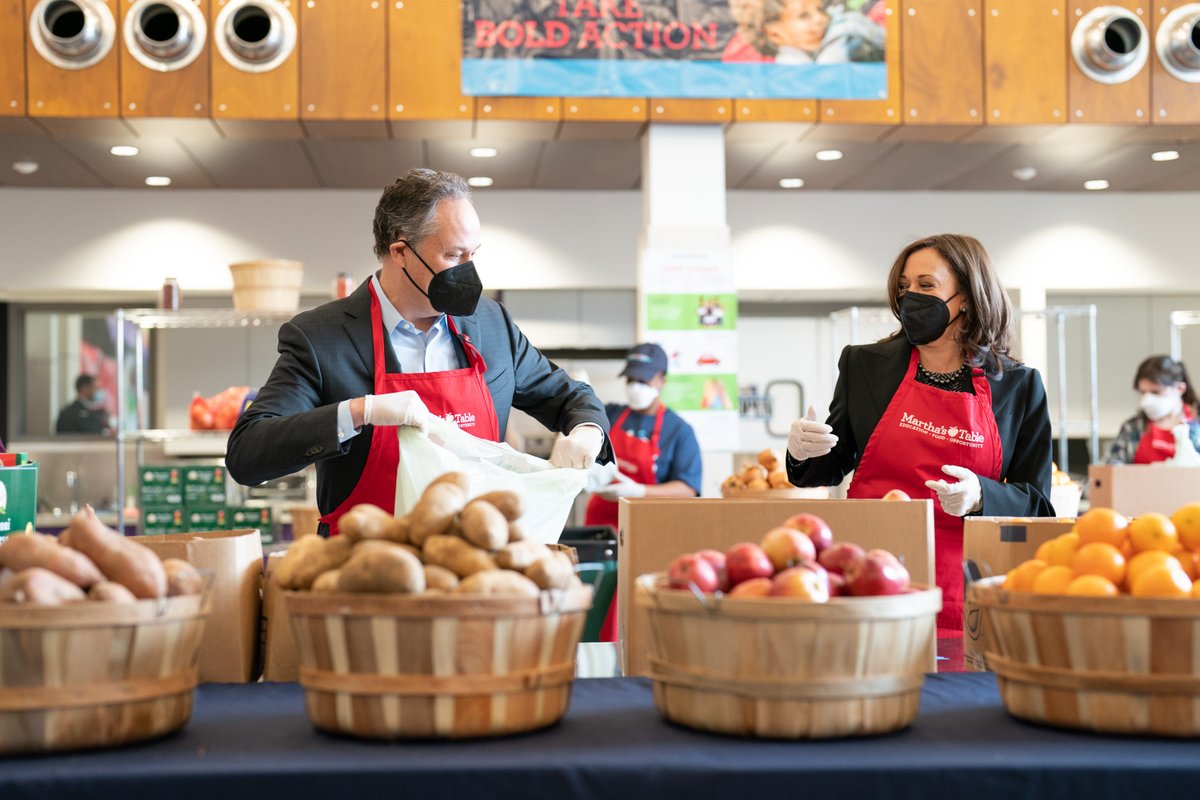 @RepValDemings
We fight this week for #VotingRights in honor of Dr. King. We cannot go backwards.
18 Jan, 01:00 AM UTC

Really American 🇺🇸
@ReallyAmerican1
Who else agrees that Dr. King would disapprove of so many hypocritical Republicans quoting him to help sell their anti-democratic agenda? ✋
18 Jan, 01:02 AM UTC

@FPWellman
I didn’t do any MLK quotes or memes today. It feels performative. I spent the day working on our new effort to fight the roll back of voting rights and erasure of #January6th. It feels like the only right way to honor Dr. King’s legacy in my little corner. Honor him with action.
18 Jan, 01:59 AM UTC

I Smoked Trump's Seditious Conspiracy
@BlackKnight10k
In the words of the great Dr. King, "Fuck Joe Manchin and Kyrsten Sinema, and fuck all you Republican snakes who won't pass voting rights legislation..." Or something like that.
18 Jan, 12:10 AM UTC

@funder
"If you really, truly want to honor Dr. King, don't dishonor him by using a Congressional custom as an excuse for protecting our democracy." Speaker Pelosi #MLKDay 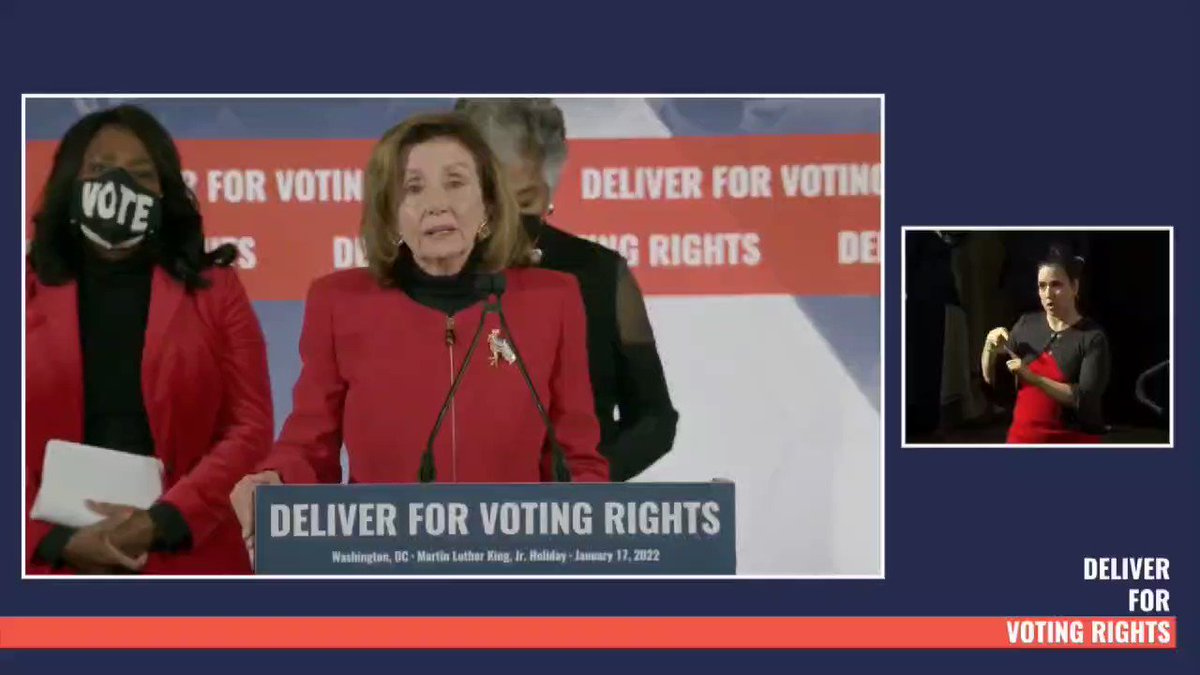 Lori Dunn
@LoriDun33229005
You sir are an absolute disgrace and embarrassment to this country. How dare you even attempt to compare the work of Dr King to George Floyd!! #LetsGoBrandon #BidenWorstPresidentEver https://t.co/9q4UVX5N8d
18 Jan, 12:57 AM UTC 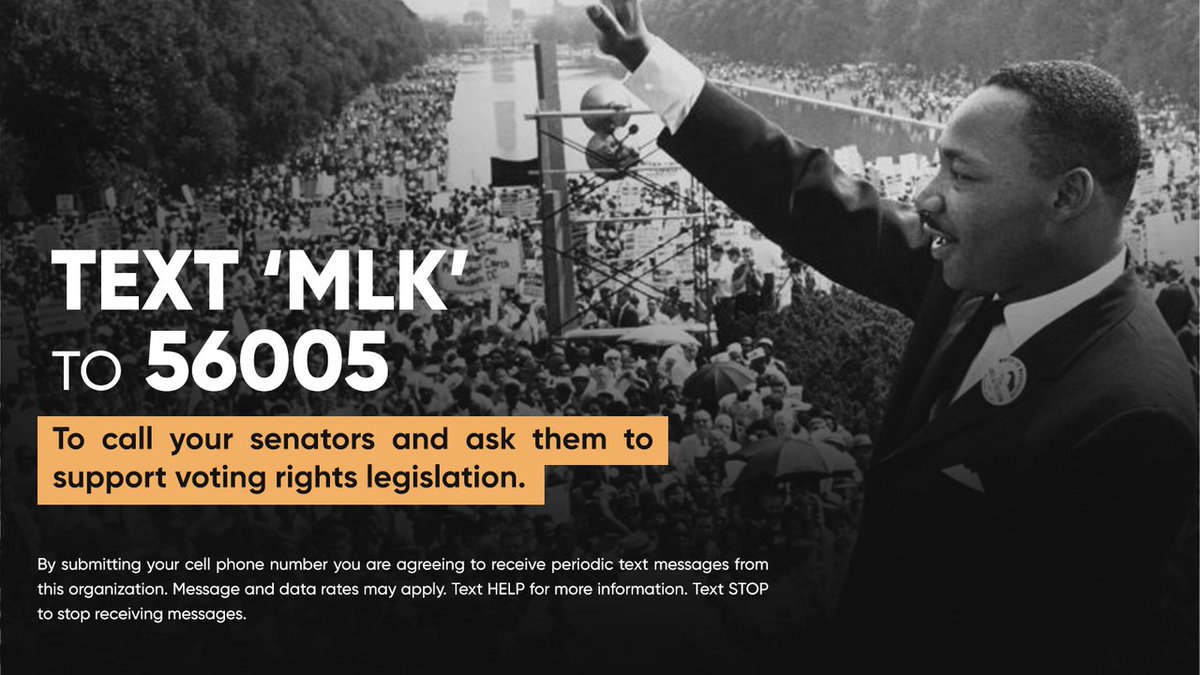 Aaron Parnas
@AaronParnas
“The tragedy is that we have a Congress with a Senate that has a minority of misguided senators who will use the filibuster to keep the majority of people from even voting.” —- Dr. King
17 Jan, 09:48 PM UTC

@nhannahjones
This is what I’m talking about. Companies, politicians, carefully select which of Dr. King’s words they quote and they do so without context. The focus on “peace” and “service” is strategic. King: “True peace is not merely the absence of tension: It is the presence of justice.” https://t.co/sx7VSYL1iU
18 Jan, 01:56 PM UTC

ProfessorBlackTruth
@ProfBlacktruth
Seems @rhianna thinks that this is the way to show her admiration for Dr King. These immigrants who make it a point to disrespect our icons are the reason why we need to draw a distinction between ourselves and them. https://t.co/JbxiBfFF57
18 Jan, 05:16 AM UTC

The Beat with Ari Melber on MSNBC 📺

@SenErikaGeiss
If you’ve been quoting Dr. King today on this #MLKDay while you’ve engaged in restricting the #FreedomToVote in any capacity, you are a threat to democracy and humanity. 1/7 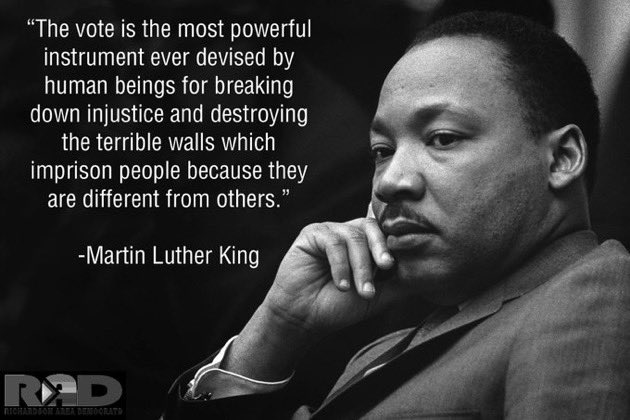 Covie
@covie_93
So, every senator that 'honor the life and legacy of Dr. King' yesterday will be voting to pass voting rights today, right?
18 Jan, 02:16 PM UTC

StandForBetter.org
@StandForBetter
Happy #MLKDay where Republicans quote Dr. King then stand against the #VotingRightsAct which Martin Luther King would have fought for. GOP 👉 Hypocrite From #TheUnknownResister ~RT and let us know YOUR thoughts! https://t.co/0EqkvvFEmK
17 Jan, 09:49 PM UTC

@YouTubeTV
Dr. King's dream for equality and a better tomorrow remains as critical today as it was during his lifetime. @Ava DuVernay continues to spread his powerful message with Selma. https://t.co/Or6eF2Dwtp #MLKDay2022