@AndyBurnhamGM
I didn’t detect much discipline in the Education Secretary’s efforts to supply children with laptops during any of the lockdowns. 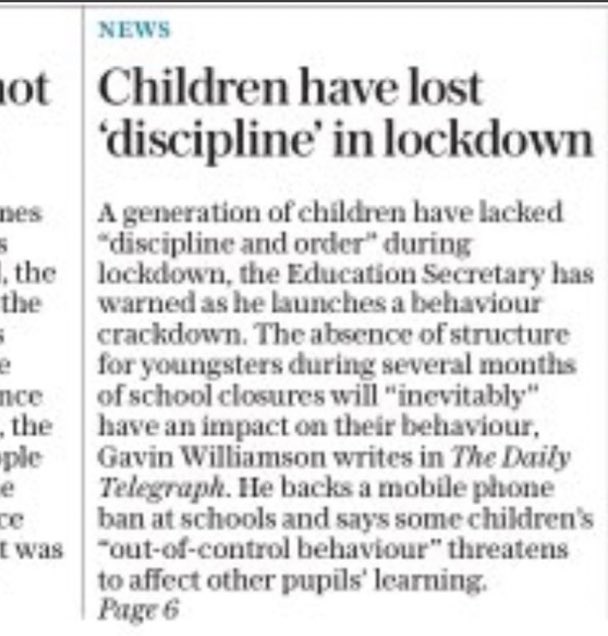 @wesstreeting
Gavin Williamson has the AUDACITY to criticise PARENTS saying children lacked "order and discipline" during lockdown. This from an Education Secretary whose leadership has been a CHAOTIC SHAMBLES. He should be grovelling to parents for forgiveness for this abysmal record: 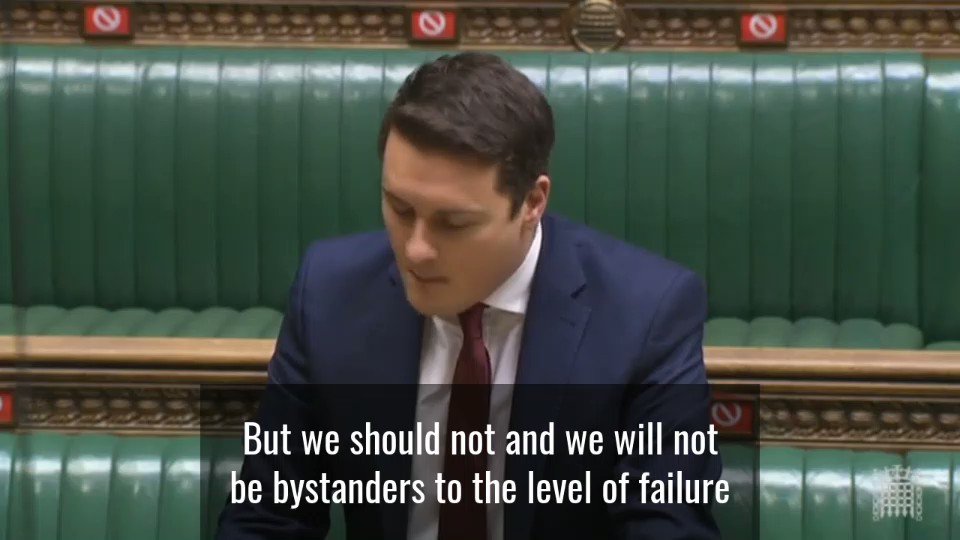 @DavidLammy
Strange for the disgraced Education Secretary to announce a crackdown on bad behaviour. After his year of calamities, if Gavin Williamson was a school kid he would be facing permanent expulsion. https://t.co/HYVCwBwmkN
07 Apr, 07:49 AM UTC

@AngelaRayner
Gavin Williamson should sort himself out before lecturing our kids after the year they've had, made a lot worse by their bad luck of growing up with him as Education Secretary. He's voted to let kids go hungry and left kids without laptops for a year of lockdowns. Grade: U. https://t.co/mIfBedgy2o
07 Apr, 09:00 AM UTC

Helen the Zen 🏴󠁧󠁢󠁷󠁬󠁳󠁿 💙
@helenmallam
We have an Education Secretary who hates kids, but Gavin Williamson, who was sacked by Theresa May for the Huawei leak and had an affair when his wife was pregnant with their first child, really loves discipline.

Alex #FBPE
@Dunglishman
This is Gavin Williamson. When he was Defense Secretary, Gav thought he could solve the materiel crisis by 'buying tractors and attaching really expensive guns to them' He's now Education Secretary. Let that sink in.

Dr Zubaida Haque
@Zubhaque
The Education Secretary's inappropriate focus on children lacking "discipline and order" because they have been in 3 lockdowns (two of which his government could have avoided if they had taken EARLY action) is not only divorced from reality, but an insult to parents and children.
07 Apr, 07:32 AM UTC

@Bill_Esterson
Williamson accusing children of bad behaviour, by implication blaming parents. No doubt to distract from Exam fiasco Non delivery of laptops Last minute school closures Delays in rapid testing at schools He has failed as Education Secretary and is in no position to point fingers
07 Apr, 08:07 AM UTC

Tory Fibs
@ToryFibs
Tory Education Secretary says children lacked order & discipline during lockdown. Correct Gavin. We lost 150,000 dead to the virus & 4 million to infections. Our children are grieving, as are we all. Back off.
07 Apr, 01:57 PM UTC

Gary James (Guitarman)💙🕯🎼🎸#FBPE , 3.5% ,#BLM
@GJSSONGWRITER
Totally cheesed off with Williamson .A pathetic statement from a pathetic Education Secretary . I’ve worked with kids for 40 years and I can guarantee he knows absolutely nothing about classroom organisation and behaviour. So much for these kids to deal with through the pandemic.
07 Apr, 08:42 AM UTC

@IanByrneMP
The most inept Education Secretary in living memory now blames parents & children for the consequences of his shambles of a response to the pandemic. Our kids, teaching staff & communities have suffered because of Williamson. Let’s not let him gaslight the UK. He owns this.

Carla Martin
@Carlabela1
Grrr. Gavin Williamson is at it again. Worst Education Secretary the UK has ever had in my opinion.
07 Apr, 08:29 AM UTC

JD Black🥀
@_JD_Black
How DARE the worst Education Secretary ever, Gavin Williamson, accuse our children of bad behaviour. They deserved all the support in the world. Instead they got ✖️Exam results chaos ✖️Laptop delivery chaos ✖️School closures chaos Love and solidarity to our amazing children❤️
07 Apr, 09:19 AM UTC

Kathy Evans
@Kathy_CEO_CE
I know I shouldn't be surprised, but seeing the Education Secretary prioritising a crack down on pupil misbehaviour right now has left me gasping for air, and reminded me how emotionally illiterate & incoherent govt policy on 'behaviour' consistently is https://t.co/K1tHj3ZDfO
07 Apr, 12:49 PM UTC

junesim63 💙
@JuneSim63
As Education Secretary Gavin Williamson writes that children have become undisciplined & unruly due to lockdowns & homeschooling, I prefer this tribute instead 👇 #homeschooling #lockdown #GavinWilliamson https://t.co/XBxVUBzzEd
07 Apr, 08:20 AM UTC

MimiJ
@MimiJ9
If you had to choose an education secretary out of every single person in the whole world. Gavin Williamson would be last
07 Apr, 01:24 PM UTC

Politics Polls
@PoliticsPollss
Education Secretary Gavin Williamson wants the use of mobile phones in schools to be banned as part of a crackdown on bad behaviour following children's "lack of regular structure and discipline" during lockdown. Do you support or oppose this new rule? #GavinWilliamson #Schools
07 Apr, 04:40 PM UTC

Politics Polls
@PoliticsPollss
A generation of children have lacked “discipline and order” during lockdown, the Education Secretary has claimed. Do agree or disagree with Gavin Williamson’s comments? #GavinWilliamson #Politics #Schools
07 Apr, 05:31 PM UTC

Random Bits 🔶 #FBPE
@Rand0mB1tsUK
Would ‘more discipline’ make Gavin Williamson better at his job? | Tom Peck Education secretary’s call for more discipline in schools won’t make any difference because there's not a single solitary teacher or pupil who has any respect for him whatsoever https://t.co/PfD5Pkxxlj
07 Apr, 03:58 PM UTC

Sarah
@SLewmark
@Telegraph Williamson isn’t fit for the role of Education Secretary. This is hot air to distract from the fact that he’s made an utter shambles of everything he’s touched in the last twelve months. Discipline regime?? We are talking about kids. Not conscripts. Or is that next? #ToriesOut
07 Apr, 03:28 PM UTC

Riccardo Besty
@TheRealBesty
@AvonandsomerRob Changed my mind, I ticked yes, but actually think no now. Schools are right to ban them if there is an issue in their school caused by phones in school time (bullying, behaviour etc). The education secretary shouldn’t be applying a blanket ban on them though.
07 Apr, 06:14 PM UTC

Matt
@matt14UK
Hey @GavinWilliamson just because your kids are spoiled dicks doesn't mean the rest of us have dick kids. For an education secretary you don't half say some uneducated things like the rest of your party.
07 Apr, 06:13 PM UTC