@DavidHundeyin
I'm not going to say anything about the Ike Ekweremadu story until he is arraigned and the charge sheet is made public. Then it's over for everybody who tried to discredit my work last year. It's over for you people.
23 Jun, 02:48 PM UTC

Eko L'omo
@escobless
You see how Igbo people are celebrating the arrest of Ike Ekweremadu? You would even wonder if he's Igbo. Igbos banish evil people not support them. Igbos don't play ethnic politics and that's why the SE never supported any Igbo presidential candidate until Peter Obi came.
23 Jun, 12:22 PM UTC

Dr. Chinonso Egemba
@aproko_doctor
That the former deputy senate president might be involved in organ trafficking is shocking... Who else is? What will push humans to such levels of wickedness. The same Ike Ekweremadu?
23 Jun, 11:22 AM UTC

oseni rufai
@ruffydfire
Ekweremadu’s daughter needed a kidney, so he brought in a 15 year old homeless boy with illegally obtained passport stating the boy was 21,The boy was promised a better life.The former senate President has been denied bail.
23 Jun, 03:43 PM UTC

NEFERTITI
@firstladyship
Ike Ekweremadu had all the opinion about Obi. Today, he’s been arrested by UK police for human trafficking & organ harvesting, including his wife. Bloomberg equally visited Tinubu’s Corrupt Empire. An angel must be behind the peacemaker; Peter Obi. The God of Obi, fight for us.🙏
23 Jun, 01:19 PM UTC

@TheFavoredWoman
OMG! This Ekweremadu story is even more sordid! 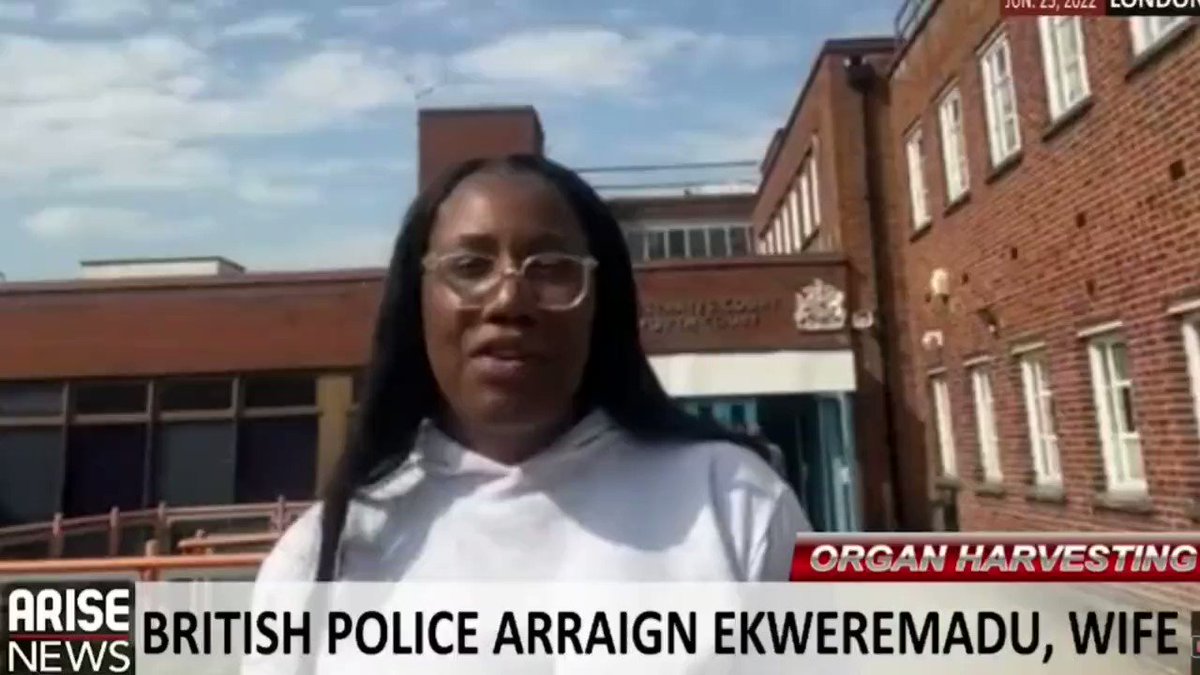 Everest
@novieverest
Those in the UK, please go to the magistrate court our brother Ike Ekweremadu and his wife Beatrice Ekweremadu will be arraigned today. Give us standard pictures. The quality Osinbajo usually posts. Thank you.
23 Jun, 01:13 PM UTC

@OgbeniDipo
"Nwanneka Ekweremadu, 55, and Ike Ekweremadu, 60, are in police custody and have been charged with trying to bring a child to the UK to harvest their organs. They will appear in court later today." - The Sun UK
23 Jun, 11:14 AM UTC

Daniel Regha
@DanielRegha
Ike Ekweremadu tried to de-market Peter Obi some hours back in an attempt to promote Atiku, today he's been arrested & charged with organ harvesting; The bad publicity he tried to give Obi has now backfired. Sooner or later, all politicians will get a dose of their own medicine.
23 Jun, 01:46 PM UTC

oseni rufai
@ruffydfire
Ekweremadu’s daughter needed a kidney, so he brought in a 15 year old homeless boy with illegally obtained passport stating the boy was 21,The boy was promised a better life.The former deputy senate President has been denied bail.
23 Jun, 03:45 PM UTC

@OgbeniDipo
If convicted, Ike Ekweremadu and his wife are going to jail in the UK. This is the saddest thing that can happen to a Nigerian big man - UK jail.
23 Jun, 11:34 AM UTC

Chief.
@BadmanSophss
Lmao people being proper shocked at that news of Ike Ekweremadu and his wife have too much faith in Nigerian politicians. Whatever they say a Nigerian politician did, he did that shit and if they investigate properly, so much more.
23 Jun, 11:00 AM UTC

Bibi
@boluxxxx
This Ekweremadu case has me suspecting any Nigerian politician who was once sick but is suddenly fresher.🤨
23 Jun, 04:22 PM UTC

Adefemi Akinsanya
@femmefemi
Alleged victim is this case is homeless 15 year old boy who was brought to the U.K. by Mr and Mrs Ekweremadu off the streets of Lagos Nigeria.
23 Jun, 02:13 PM UTC

@ogundamisi
Nwanneka Ekweremadu, 55, and Ike Ekweremadu, 60, both from Nigeria are charged with conspiring to harvest organs from child https://t.co/Ca8Q4tYC6Z
23 Jun, 10:47 AM UTC

Simon Ekpa
@simon_ekpa
Ike Ekweremadu trafficking a child for organ harvest is the worse crime on earth, this will show how evil they & the reason we the new generation can never allow these criminals to be part of Biafra restoration. They will fight to remain in Nigeria where their crimes are covered
23 Jun, 12:28 PM UTC

@TheFavoredWoman
If Ekweremadu was in Nigeria, DSS would have picked that doctor and threatened him to silence (if he even had the decency to refuse the transplant), journalists would have been picked and harassed, and the boy and his family bullied to silence
23 Jun, 06:04 PM UTC

Dahunsi Olabode🦋🦋
@DahunsiVict
You see how Igbos are "celebrating" Ike Ekweremadu arrest? That's the only region that doesn't play tribal or bitter politics. They've rejected their kinsmen over the years for lack of efficiency. Now, they found solace in Peter Obi, you are trying to gaslight them... Lol.
23 Jun, 12:59 PM UTC

UNN
@UnityNewsNet
🚨EXCLUSIVE🚨 It is now confirmed that Nigerian politician Ike Ekweremadu is the one arrested on charges of bringing a child to the UK to then harvest their organs. Here he is meeting Prince Charles back in 2018. 👀👀👀 https://t.co/AEEiRQEHjR
23 Jun, 01:50 PM UTC

OTUNBA 🇨🇦
@ManLikeIcey
Igbos are the ones celebrating Ekweremadu’s arrest in UK the most for organ harvest, I’ve noticed something about them they always called out politicians they see as bad in their region; Orji Kalu, Ikpeazu, Obiano and Hope Uzondinma. Peter Obi is loved because he’s different.
23 Jun, 02:35 PM UTC

Gistlovers.blog1
@Gistloversblog1
UK is not Nigeria where lawlessness abound. Ekweremadu has been remanded in prison till July 7th when his case will be heard https://t.co/g0Z899lb8b
23 Jun, 05:14 PM UTC

Arch Angel Jesse 🍥
@Jessehallidaygi
Peter Obi is not an Igbo Man!!!! He is a Nigerian, trying to give us a better life and country!!! Nigerian's Need him more than he needs us!! Make sure you make them see it on their timeline when they come online. #PeterObi2023 UK police #thiefnubu Reno Ike Ekweremadu Igbos https://t.co/XfNma658bj
23 Jun, 03:55 PM UTC

Ada Idemmili OGBANJE 👨‍👩‍👦 Labour party
@adaigbo_2022
When David Hundeyin uncovered about underground organ harvesting market, some of you insulted him because he was pointing fingers to some politicians, now Ike Ekweremadu own don show. UK should throw them inside forever jail.
23 Jun, 12:17 PM UTC

DR.PENKING™ 🇦🇺🇳🇬 #PeterObi
@drpenking
So the full story is that Sen Ike Ekweremadu’s child had kidney issues so he and his wife picked a 15 year old homeless boy in Lagos and trafficked him to UK with the promise of a better life. Little did the poor boy know that he was on his way to have his kidney and
23 Jun, 04:23 PM UTC