Engel is trending on Twitter. Popular tweets on Engel.

A Very Good Jamie
@jamie_agust
BREAKING: Jamaal Bowman beats establishment candidate Eliot Engel in +25 point upset making the Bronx one of the most progressive counties in the nation
24 Jun, 03:37 AM UTC

@briebriejoy
Looks like Engel, who was famously absent from own district as the COVID crisis unfolded, won't be compelled to visit at all going forward. 😋 So excited my mom got a chance to vote for Bowman today . https://t.co/2csYJDHOXz
24 Jun, 02:11 AM UTC

@kenklippenstein
Thinking about how the Congressional Black Caucus endorsed Engel
24 Jun, 04:22 AM UTC

@RealTimBlack
Hillary, Pelosi, and Schumer all backed Engel the Incumbent making this even sweeter. Thank you New York. https://t.co/5UwHeWs8xi
24 Jun, 02:59 AM UTC

The Humanist Report🌹
@HumanistReport
This is incredible. Engel was endorsed by everyone in the establishment—they even trotted out Hillary Clinton's dusty ass—and Engel still went down! FUCK yes. https://t.co/J4StJcX1US
24 Jun, 03:26 AM UTC

@LukewSavage
Congratulations to whichever grotesque lobbying firm is about to add Eliot Engel to its roster of consultants
24 Jun, 04:17 AM UTC

@thrasherxy
Watching the entire Democratic establishment—including the Congressional Black Caucus!—back the white, losing Eliot Engel & not the wonderful winner, Jamaal Bowman, reinforces how out of touch the DNC is. It doesn’t know what ppl want or how to win. It’s not an opposition party! https://t.co/hOrqH9n1Gr
24 Jun, 03:07 AM UTC

@aaronjmate
If Engel goes down, it's not just Israel, Saudi, & GOP who are losing a major ally. It's also all the Woke Syria Regime Changers: Engel is one of the leading Congressional backers of the Syria proxy war & of the Caesar sanctions inflicting new misery on Syrian civilians.
24 Jun, 03:31 AM UTC

@WaywardWinifred
Eliot Engel leaves Congress with full pension and healthcare for LIFE. All workers deserve this when they leave their jobs after 30 years.
24 Jun, 05:35 AM UTC

@NY1
Jamaal Bowman, who has a lead in his primary against Eliot Engel, just spoke to supporters. "Our movement is designed to restore that faith, to restore that hope, to bring back the belief in what is possible, to root our values in everything we do." 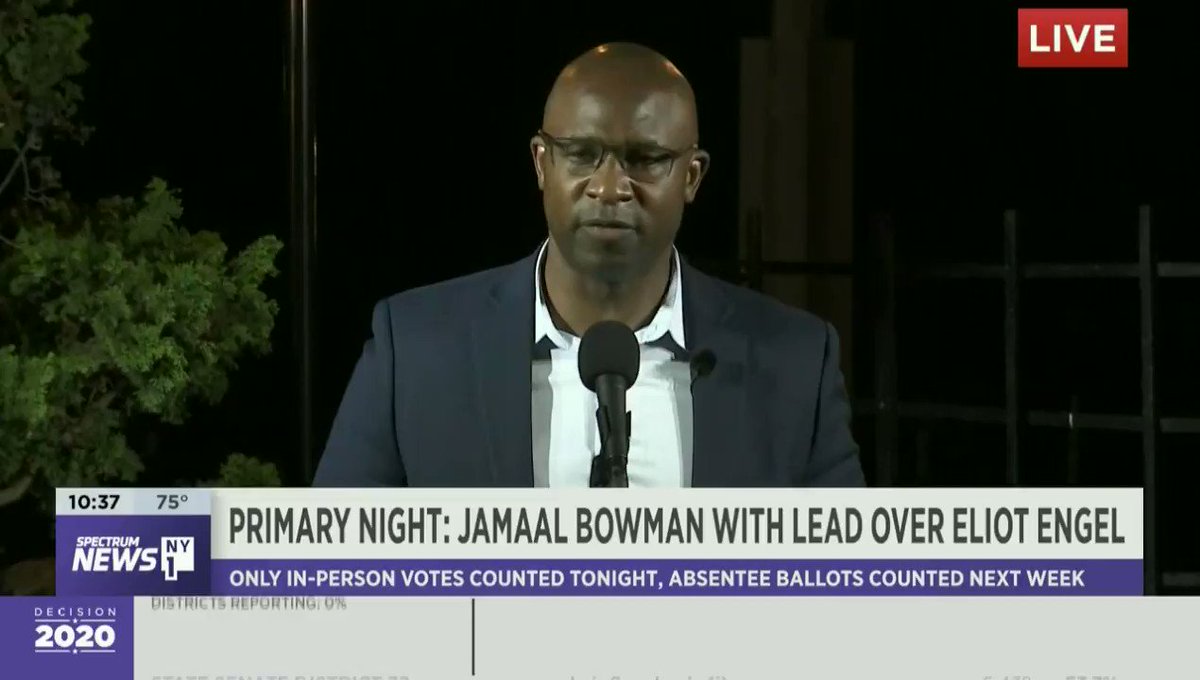 @maxberger
If Jamaal Bowman defeats Eliot Engel, it will be a shattering loss for the Democratic Party establishment. They threw everything at him: - $5 million in dark money smear ads - Endorsements from Hillary Clinton, Andrew Cuomo and Chuck Schumer And he still won. https://t.co/yB2jzlV9z5
24 Jun, 03:08 AM UTC

@JordanChariton
.@maddow already writing her monologue on how Putin took out Eliot Engel
24 Jun, 03:59 AM UTC

Alex Peter
@LolOverruled
Eliot Engel reminds me of this guy I know who is a fucking massive loser
24 Jun, 04:50 AM UTC

Lee J. Carter
@carterforva
The whole party machine circled the wagons around Engel for him to get 35% lmao hell yeah

@ZephyrTeachout
I want to hear Schumer and Pelosi explain why they thought going all in for Engel was good for, say, people. Or the Party.
24 Jun, 11:20 AM UTC

Socialist Boomer
@SocialistBoomer
Engel and McGrath were corporate Hillary Dems. Bowman and Booker are new leaders of the Sanders and AOC wing of the party. Such a happy day!
24 Jun, 02:36 AM UTC

@KamVTV
It looks like sitting House Democrat Rep Eliot Engel will lose his primary to a man they are calling the male AOC.
24 Jun, 02:00 AM UTC

Barbara Malmet
@B52Malmet
An AOC level upset is brewing in the Bronx and Westchester as Eliot Engel is losing bigly to Jamaal Bowman. It will take a while to tally all the results, though.
24 Jun, 02:53 AM UTC

Calla
@CallaWalsh
Y'all — if you thought ELIOT ENGEL was bad, I'd like to introduce you to JOSH GOTTHEIMER. He's one of the most conservative Dems. Voted with Trump more than any other Dem Rep or Senator in 2018 (77% of the time). Blocked amendments to improve conditions for children in cages.
24 Jun, 04:19 AM UTC

David Doel
@daviddoel
Watch this clip and remind yourself that this is who Hillary Clinton and Andrew Cuomo rejected, instead endorsing Eliot Engel who fought against Obama’s Iran deal and took GOP money. https://t.co/t8vixwH0Em
24 Jun, 11:35 AM UTC