"FBI and DOJ" is trending

Popular tweets on "FBI and DOJ".

@RudyGiuliani
The FBI and DOJ leadership has abused the awesome power of law enforcement as if the U.S. has no constitution and is a fascist police state. Even with documented evidence of crimes endangering our national security they continue to cover up for the Biden Crime Family.
09 Aug, 01:54 AM UTC

@KurtSchlichter
Awaiting the tsunami of good apples at the FBI and DOJ quitting to protest this. Not one will. Mark my words. Stop telling me they are filled with good people. At best it's cowards. At best.
09 Aug, 12:48 AM UTC

@RepAndyBiggsAZ
Congress must look into the viability of our federal law enforcement agencies that abuse their authorities for political purposes. Rogue individuals within the FBI and DOJ are violating their oath of office by not upholding the law and they need to be held more accountable.
08 Aug, 11:20 PM UTC

Mike Lee
@BasedMikeLee
Ninth, what should we make of the fact that this is occurring while FBI and DOJ have taken no discernible action regarding (for example) flagrant violations of the law by (a) Hunter Biden, or (b) pro-abortion extremists threatening Supreme Court justices at their homes?
09 Aug, 03:06 AM UTC

@benshapiro
If Sandy Berger shoves classified documents in his pants, that's unqualifiedly a legal violation. But the president has the ability to declassify materials before leaving the White House. So this is even more dicey for the FBI and DOJ than usual, requiring real specifics.
09 Aug, 04:21 AM UTC 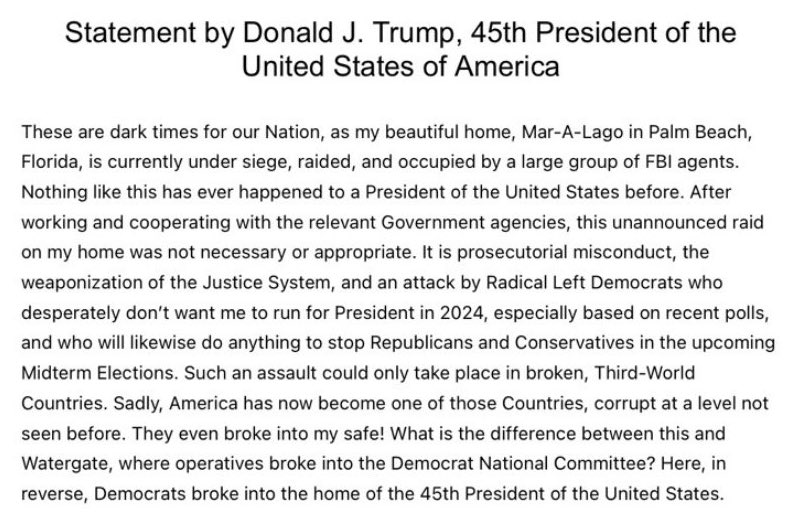 @RepDanBishop
The FBI and DOJ are acting as the political enforcers of the Democrat Party. The FBI must immediately release the information used to obtain the warrant. Garland and Wray must immediately come before @JudiciaryGOP. Republicans must smash the FBl into a million pieces.
09 Aug, 12:51 AM UTC

Gunther Eagleman
@GuntherEagleman
The FBI and DOJ are fucking corrupt…! They must be dismantled.
08 Aug, 11:16 PM UTC

🇺🇸 The FJC 🇺🇸 (Same on Truth!)
@The_FJC
Mar-a-Lago has been RAIDED by the FBI! The COMMUNIST TAKEOVER of the USA appears to be off and running! The Democrats are going SCORCHED EARTH and have fully WEAPONIZED the FBI and DOJ as political hatchet men. GOD SAVE THIS GREAT NATION. A REVOLUTION IS UPON US!
08 Aug, 11:30 PM UTC

💋TheModernMarilyn
@GlamGabber
@AriFleischer What prevents them from planting evidence now that they just indiscriminately grabbed boxes of documents? We are in uncharted territory with these lying and despicable FBI and DOJ.
09 Aug, 01:39 AM UTC

Libertarian Party Mises Caucus
@LPMisesCaucus
Splinter the FBI and DOJ into a thousand pieces and scatter it to the winds.
09 Aug, 12:46 AM UTC

@RepGregSteube
Even before Trump was president, the FBI and DOJ spied on the Trump campaign, abused a secret FISA court, and claimed “Russian collusion.” Now this! AG Merrick Garland says he is not a political operative for the Left? https://t.co/EDXbjyM1a5
09 Aug, 12:57 AM UTC

888 Good Troubles
@LebergerDavid
The FBI and DOJ need to take those calling for violence and civil war seriously and fast. We didn’t do that earlier and Jan 6th happened. #MorningJoe
09 Aug, 11:46 AM UTC

The Columbia Bugle 🇺🇸🍊
@ColumbiaBugle
The comments of these Republicans about the FBI and DOJ this week mean absolutely nothing. https://t.co/yRDCZ5VfD6
09 Aug, 12:52 PM UTC

@BlueBoxDave
If this investigation into Trump fizzles the door will be wide open for a GOP president and congress in 2025 to absolutely dismantle the FBI and DOJ. There will be no defense against doing so.
09 Aug, 12:00 PM UTC

Hounddog
@TheHounddog71
No way the FBI and DOJ are gonna conduct a raid on a former President’s house without knowing for sure the evidence in question was there. They’ve got what they wanted.
08 Aug, 11:45 PM UTC

LionHearted
@LionHearted76
The FBI and DOJ’s escalating tactics are a threat to America as we know it. 18 USC 2071 is the key to the Mar-A-Lago raid: If Trump destroyed records it carries the penalty that someone who’s convicted of it is disqualified from running for future Federal office. https://t.co/CZrVifhCZt
09 Aug, 04:51 AM UTC

🐻Fuzzy🧸
@BearsProtect
Where was the FBI and DOJ when… The Clinton’s left the Whitehouse with Classified Documents, Sold Military Secrets to countries around the world, took the Whitehouse Silverware, except it was Gold!! O Yeah then there was Benghazi and 30,000 emails. Etc Etc Etc
09 Aug, 12:54 PM UTC

@KenDilanianNBC
Point of context here: After what happened with the Trump-Russia investigation—an FBI lawyer pleaded guilty to a felony and lost his career—imagine how careful and cautious the FBI and DoJ would have been about this search warrant. https://t.co/JP4qvIQFEr
09 Aug, 01:13 PM UTC

james derossett
@Jimd04064
Thank you to all 1500 people who have followed me. Michelle Obama say’s when the go low, we go high but remember never bring a squirt gun to a machine gun fight. Hit them where they live, and if it’s Trump, do it literally. Thank you FBI and DOJ
09 Aug, 01:09 PM UTC

Mark hensen
@Markhensen3
@laurenboebert It's time to defund and restructure the FBI and DOJ both are totally corrupt
09 Aug, 12:05 AM UTC

Super Utra Infinity MAGA Patriot from PA
@FittonGrill
I CANNOT BELIEVE THE FBI AND DOJ RAIDED THE HOUSE OF THE GUY WHO BROKE THE LAW BY TAKING CLASSIFIED DOCUMENTS FROM THE WHITE HOUSE!!!! THIS IS COMMUNISM!
09 Aug, 12:04 AM UTC

Gila County Young Republicans
@AZGCYR
We are completely disgusted with the actions of fbi and doj We are here to tell you we will fight harder We will not back down In the memory of all the patriots put to death or locked up to create and preserve what we had we fight in your honor to get it back #TheMagaPromise!
09 Aug, 01:29 PM UTC