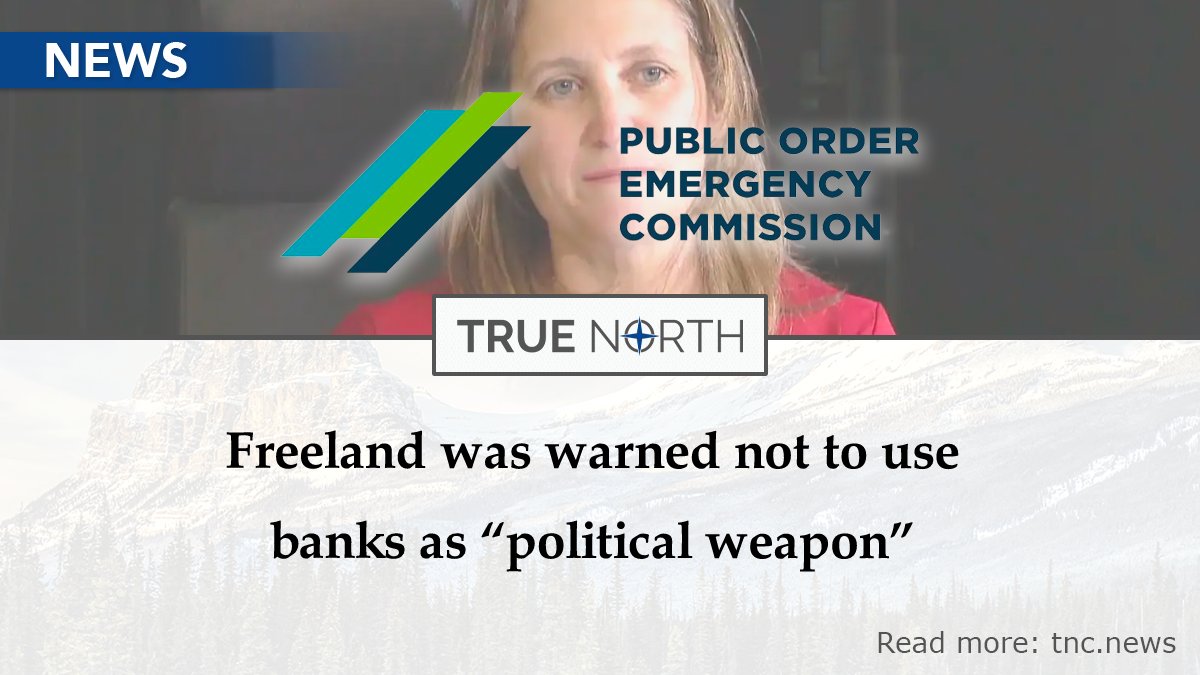 Kris Eriksen 🇨🇦
@KEriksenV2
The Conservative Party should be all over Trudeau, Freeland, Blair, Mendicino, and all of the others that lied their way into deploying the EA and crushing the peaceful protesters. Silence speaks volumes.
26 Nov, 05:44 PM UTC

Scott Reid
@_scottreid
Who knows what Rouleau thinks. Who knows what he'll conclude or recommend. Those are challenges to contemplate another day. But this week was a giant landmine. And Blair, Mendocino, Lametti, Freeland, Telford, Broadhead, Clow and Trudeau all walked through unscathed. #POEC
26 Nov, 01:39 AM UTC

Cheryl R
@crflames
@GasPriceWizard Trudeau and Freeland so concerned with economic impact of Freedom convoy and Trade with USA cant seem to grasp that they shut down Canadas biggest revenue maker and trade with USA with their no pipelines bill and not standing up for Canadian Oil & Gas. Shame.
26 Nov, 01:36 AM UTC

Malcolm Twizzle
@mdt546
I will make a bet that Chrystia Freeland will never be appointed the head of NATO as speculated in the Canadian msm. For one thing, they will never appoint someone from a country that doesn’t pay their dues For another, she has appeared weak and indecisive during EA inquiry
26 Nov, 11:04 AM UTC

Paul 🇨🇦🇮🇹
@stclairwest1975
@thereds8 Same thing yesterday with Freeland. Did you notice how, just before lunch, she tapped her earpiece and said "I can't hear you"? You know this inquiry is rigged
26 Nov, 05:58 AM UTC

Franny
@Franny06500078
@1MikeMorris After watching PMJT, I watched the organizers testimony again for fun. All they did was whine about themselves, poor me the victim. Quit the contrast between Tamara redneck and DPM Freeland.
26 Nov, 03:38 PM UTC

Carol Husband
@CarolHusband
Blacklocks: “Michael Sabia, deputy finance minister, cautioned Freeland  it was “a bit of a gray zone right now” as to whether depositors could retrieve their own savings.......1/2
26 Nov, 09:22 AM UTC

TrueNorth2021
@TrueNorth2021
@thereds8 Had to be Butts. And why isn't Freeland's testimony thrown out for her obvious use of secret coaching?
25 Nov, 11:53 PM UTC

Canadaoldway
@canadaoldway
@gmbutts ,,Trudeau haters '' -Nb=1- Gerald Butts. I can't imagine a different intelligence, from individuals that speak nonsense, stupidity, and shame themselves including the whole country. I would never hear so much stupidity in other countries as I heard from Trudeau, Freeland, etc.
26 Nov, 07:50 PM UTC

Canadaoldway
@canadaoldway
@gilmcgowan How come you do not hate Notley that much? Freeland for speaking stupidity worldwide, Anand, Joli, Irwin, etc? How come just Smith is in your mind?
26 Nov, 07:46 PM UTC

Derek Johnson
@Drockidy
@TomTSEC The way you folks speak about Anand, Trudeau, Freeland and Singh, being a member of Parliament entitles you to very little deference.
26 Nov, 07:41 PM UTC

Amanda
@clunkyfeather77
@Derricktgoat They could have used that to their advantage. From what Freeland said they had no tangible idea of how connected they are to us. They know now. Leaders need to be able to stand up for their citizens to all world leaders. I expect that.
26 Nov, 07:59 PM UTC

Lionhart 70
@70Lionhart
@telfordk @JustinTrudeau then all liberals need to stop lying to themselves and see Trudeau/Freeland who they really are. WEF
26 Nov, 07:54 PM UTC

Donnie Thor Mac Leod
@thor_leod
@TheGreenDailyy @sunlorrie @nationalpost There you go again. Once more, I pointed out that I had described the overreach which you denied seeing & now you come back with you already said that. I get the impression I am debating Freeland ,Butts or Trudeau & their sleazy misdirection.
26 Nov, 07:51 PM UTC

Dixie4equality+justice
@Dixie4Alberta
@Derricktgoat @shankarita Freeland said during testimony that the protest in Poland was justified bc polish ppl were protesting illegitimate gov’t, but with Lib’s having only 20% votes, China influence & NDP propping up gov’t are the Liberals really a legitimate gov’t? This is a serious question for 🇨🇦
26 Nov, 07:50 PM UTC