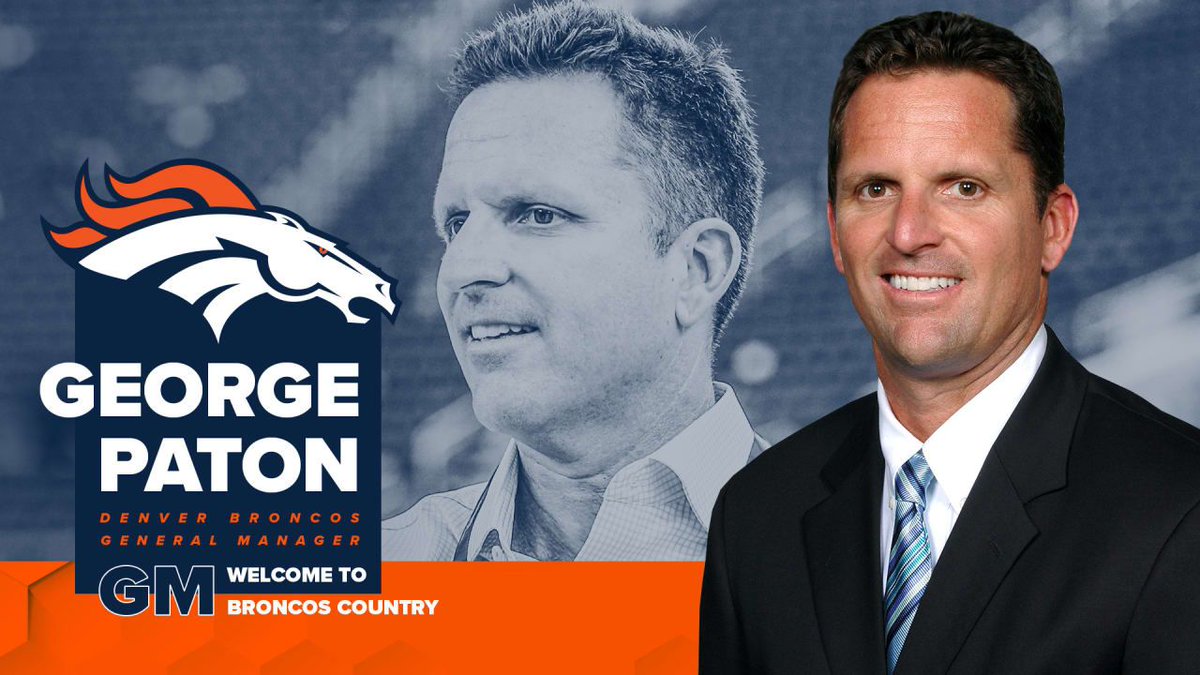 @Broncos
Let’s get to work. Welcome to #BroncosCountry, George Paton! 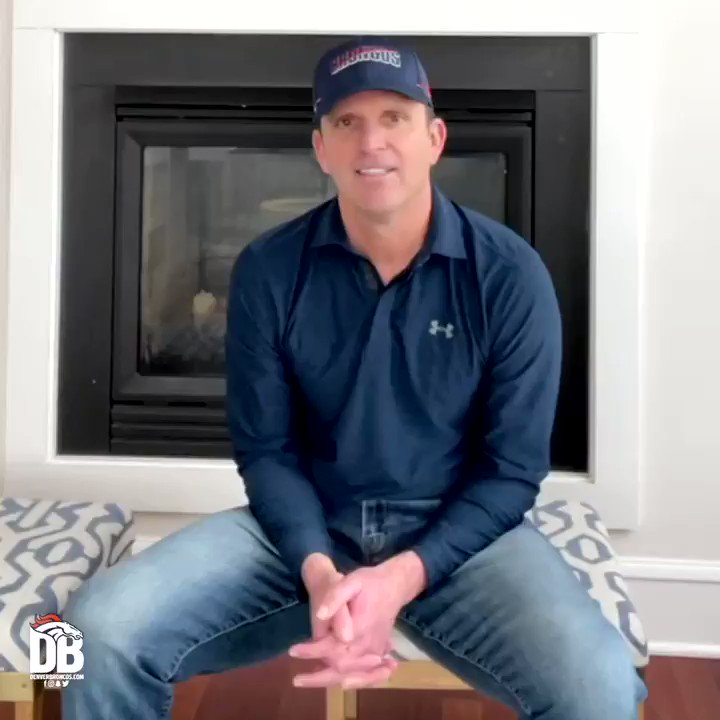 @Broncos
“I feel like this team is a sleeping giant. For me, it is the right place and the right time for this opportunity.” Statement from our new GM George Paton: 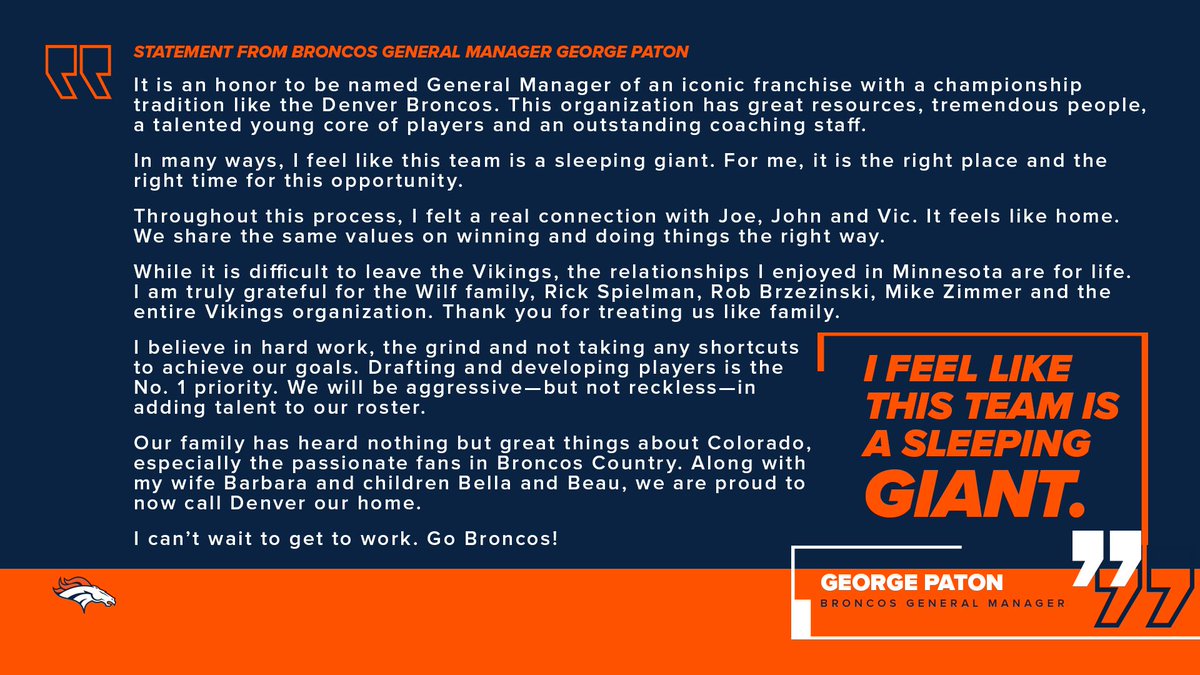 @MikeKlis
Broncos have finalized 6-year deal with George Paton to be their new GM. Elway: “All the candidates were great. We just felt George was the best fit for us.” #9sports
13 Jan, 05:41 PM UTC

@Broncos
“George has waited and worked for the right opportunity, which shows that he is smart and serious about winning.” Pres. of Football Operations John Elway on our new GM George Paton: 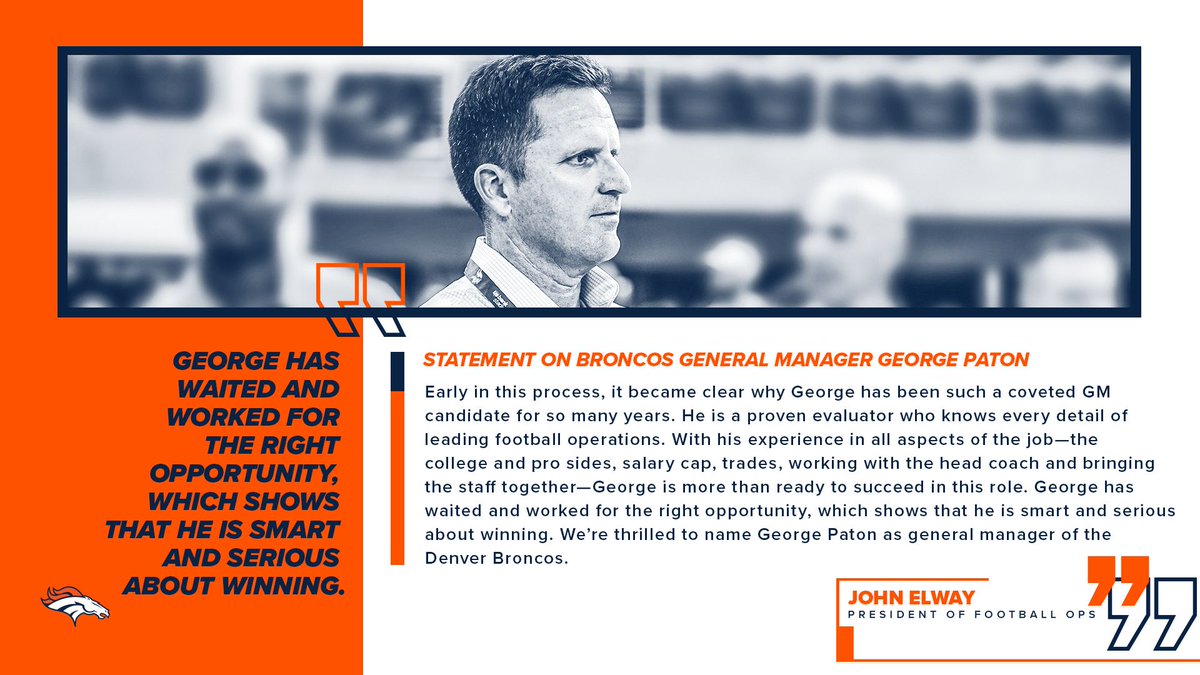 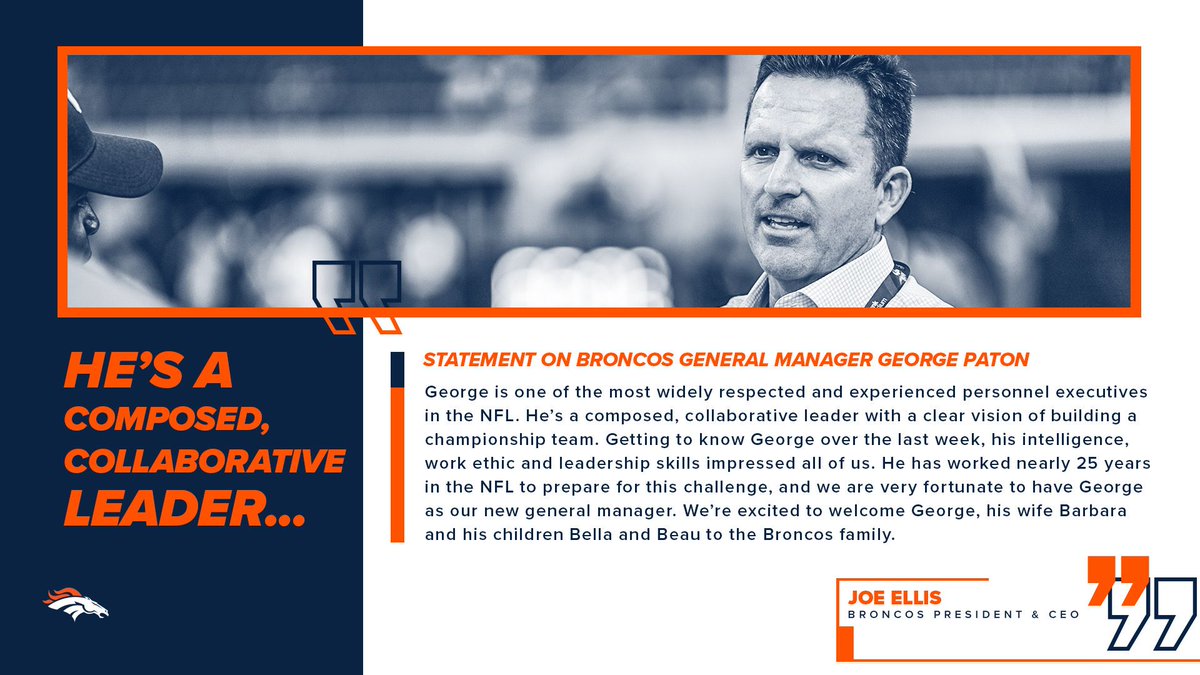 @RapSheet
From NFL Now: The #Broncos lured one of the top candidates as their new GM, as George Paton has agreed to terms in Denver. 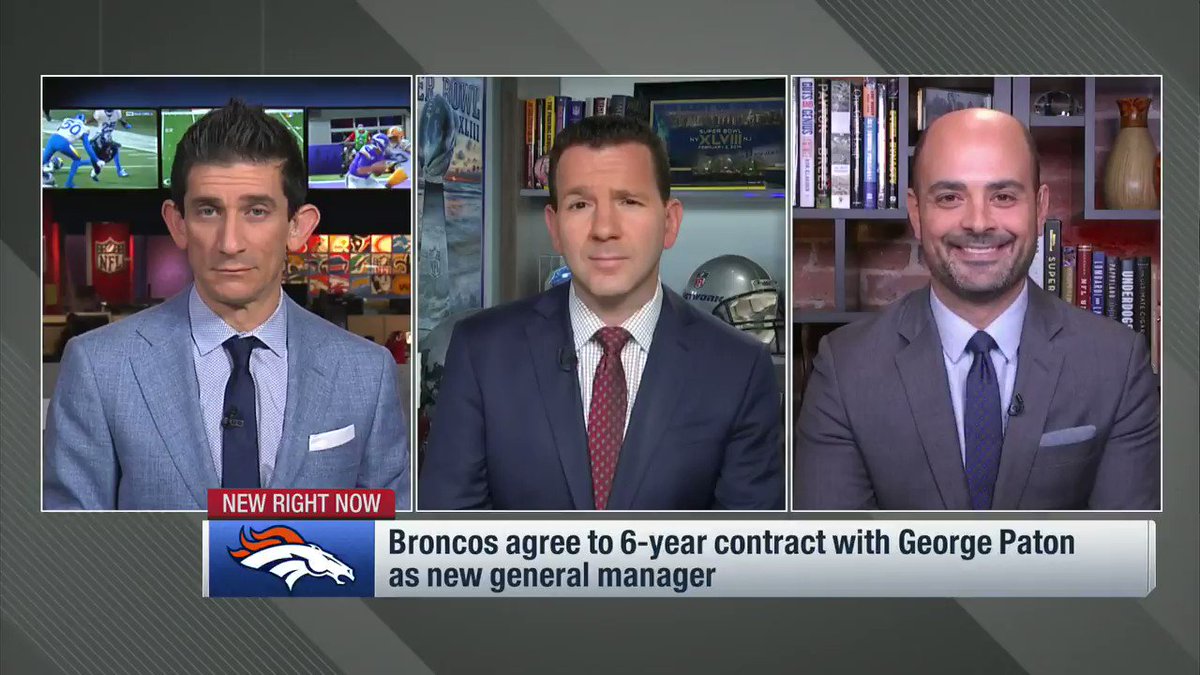 Zac Stevens
@ZacStevensDNVR
A six year deal for George Paton to become the Broncos’ next general manager is HUGE. Means they have no doubt he’s their guy. News via @AdamSchefter.
13 Jan, 05:37 PM UTC

Zac Stevens
@ZacStevensDNVR
George Paton (via @Broncos): “I believe in hard work, the grind and not taking any shortcuts to achieve our goals. Drafting and developing players is the No. 1 priority. We will be aggressive—but not reckless—in adding talent to our roster. “ Aggressive, but not reckless.
13 Jan, 06:22 PM UTC

@CharlesRobinson
#Broncos hire of #Vikings’ George Paton for GM is a win for that org. Paton was probably the most patient GM candidate since Chris Ballard went through years of interviews. Had it not been for the Shanahan/Lynch alignment #49ers wanted in 2017, Paton is running Frisco right now.
13 Jan, 06:00 PM UTC

@ryanohalloran
League source on new #Broncos GM George Paton: "Literally one of the absolute best in the business. They could not have done better. He should have been a GM years ago. Phenomenal hire."
13 Jan, 06:51 PM UTC

@AricDiLalla
George Paton: "In many ways, I feel like this team is a sleeping giant. For me, it is the right place and the right time for this opportunity." https://t.co/5f2PZrT8Yl
13 Jan, 06:11 PM UTC

Zac Stevens
@ZacStevensDNVR
John Elway on George Paton (via @Broncos): “It became clear why George has been such a coveted GM candidate for so many years… George is more than ready to succeed in this role.” “We’re thrilled to name George Paton as general manager of the Denver Broncos”
13 Jan, 06:13 PM UTC

DNVR Broncos
@DNVR__Broncos
The Broncos have found their guy. George Paton has agreed to a six year deal to become the next general manager of the Denver Broncos. #BroncosCountry https://t.co/1FIJI7ISTn
13 Jan, 05:57 PM UTC

@MikeKlis
All Broncos who came in contact with George Paton during day- and evening-long interview process yesterday started the day with POC COVID tests as did Paton. The tour, meetings and meet-and-greets were masked up at a social distance. #9sports
13 Jan, 06:52 PM UTC

Zac Stevens
@ZacStevensDNVR
George Paton (via @Broncos): "It is an honor to be named General Manager of an iconic franchise with a championship tradition like the Denver Broncos… This organization has great resources, tremendous people, a talented young core of players and an outstanding coaching staff.
13 Jan, 06:24 PM UTC

@TroyRenck
#Broncos get their guy in new GM George Paton. His foundation is in drafting and developing, and #Vikings' track record on hitting on draft picks in first three round can't be ignored. My #Denver7 story with quote from Paton and Elway: https://t.co/HQx5xQz0Yn 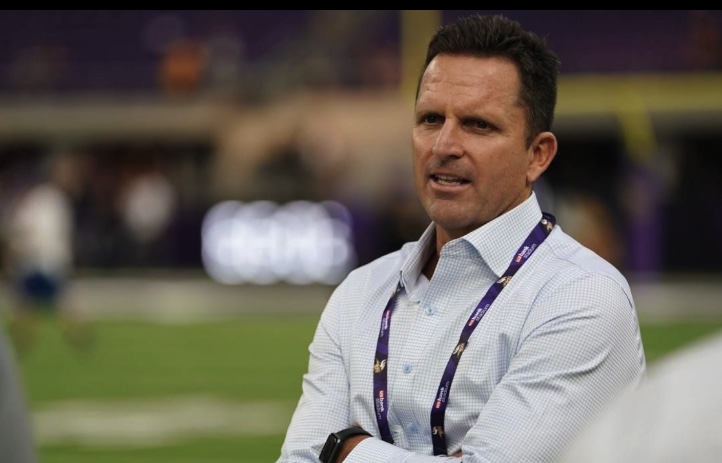 @PredomOrange
The Denver Broncos hired George Paton as their new GM on a 6-year deal. He says drafting and developing is priority no. 1. What else did he have to say about the current state of the Broncos? @SayreBedinger writes https://t.co/QSVrUKNb6L
13 Jan, 06:54 PM UTC

𝘼𝙇𝙀𝙓🎙
@V_Broncos
*BREAKING NEWS* First look at George Paton's garage, gives #broncoscountry a look at his views and ideals on lawn care and maintenance. Will it translate to the @Broncos roster? The world will find out this spring. https://t.co/BtsucnaMlA https://t.co/hppnFhhizh
13 Jan, 06:56 PM UTC