Ms. Krassenstein
@HKrassenstein
BREAKING: The President George W. Bush administration alums have formed a super PAC to support Joe Biden for President. Donald Trump is going to have a mental breakdown when he hears about this. #TrumpOut2020
02 Jun, 10:07 PM UTC

@GMPaiella
You do not, under any circumstances, gotta hand it to George W. Bush
02 Jun, 09:36 PM UTC

@AliVelshi
President George W Bush: “It is a strength when protesters, protected by responsible law enforcement, march for a better future. This tragedy — in a long series of similar tragedies — raises a long overdue question: How do we end systemic racism in our society?”
02 Jun, 08:41 PM UTC

@haymarketbooks
You absolutely do NOT have to hand it to George W. Bush. For anything. Ever.
02 Jun, 09:37 PM UTC

There are no "blue lives," only blue uniforms
@tonygoldmark
Pat Robertson is criticizing Trump, Logan Paul is acknowledging his white privilege, even George W. Bush is basically saying black lives matter. This is truly a historic day for "The Worst Person You Know Just Made A Great Point."
03 Jun, 02:36 AM UTC

@CNN
Former Pres. George W. Bush said it's "time for America to examine our tragic failures." He said he and fmr. first lady Laura Bush are "anguished by the brutal suffocation of George Floyd and disturbed by the injustice and fear that suffocate our country" https://t.co/B8NYhZV8Fh
03 Jun, 12:48 AM UTC

@WajahatAli
Trump is so bad he made George W. Bush look Presidential. This is where we're at.
02 Jun, 09:10 PM UTC 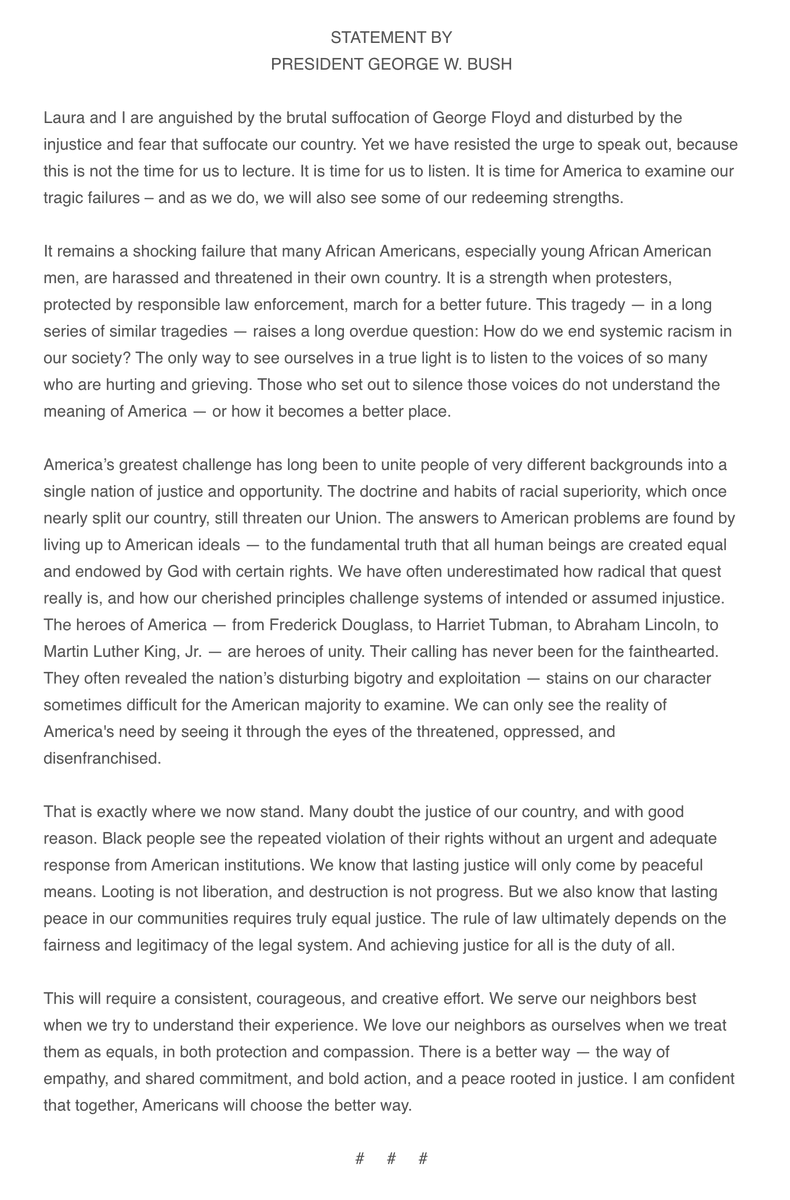 @ryanstruyk
Former President George W. Bush statement: "The only way to see ourselves in a true light is to listen to the voices of so many who are hurting and grieving. Those who set out to silence those voices do not understand the meaning of America — or how it becomes a better place."
02 Jun, 08:47 PM UTC

@NickKristof
A remarkable statement by George W. Bush, acknowledging the stain of racism in the United States, and hailing protesters who "march for a better future." No explicit mention of Trump, but the entire statement is a repudiation of everything that Trump stands for. 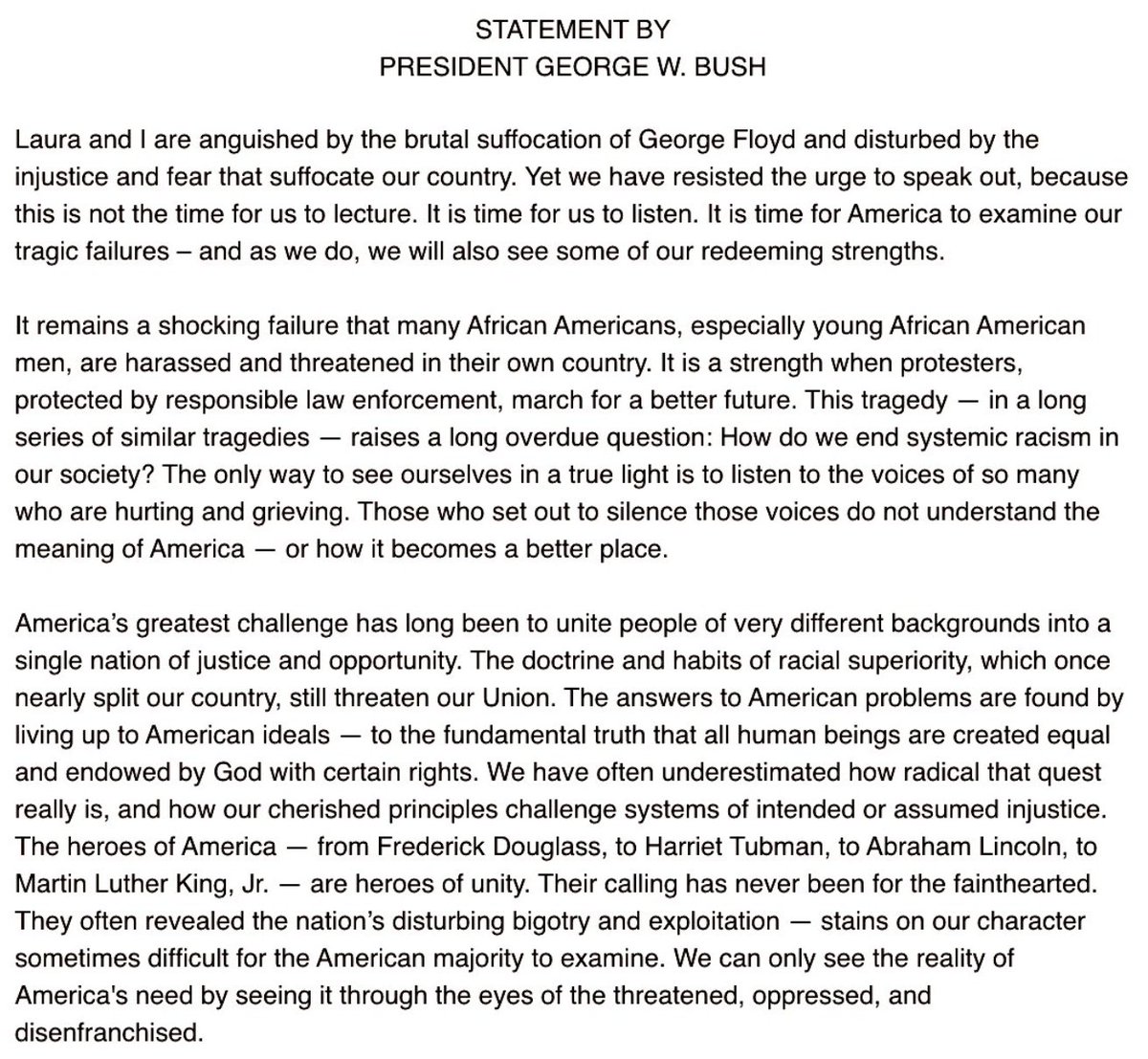 @Independent
George W Bush says those who try to silence protesters 'do not understand the meaning of America' https://t.co/aJK1UrDDjG
02 Jun, 11:41 PM UTC

@NBCNews
“We can only see the reality of America's need by seeing it through the eyes of the threatened, oppressed, and disenfranchised,” fmr. President Bush wrote. https://t.co/6p3eckL2Yg
03 Jun, 04:04 AM UTC

@SteveHiltonx
lovely words George W Bush. i agree wholeheartedly lovely words from Joe Biden this morning too but honestly, these grandstanding, virtue-signaling politicians, who did nothing to end systemic racism when in power - and in Biden's case made it worse - maybe sit this one out? 🙄
02 Jun, 09:33 PM UTC

@ABC
"Many doubt the justice of our country, and with good reason," George W. Bush says in statement on death of George Floyd. "Black people see the repeated violation of their rights without an urgent and adequate response from American institutions." https://t.co/s4VBQggo9c 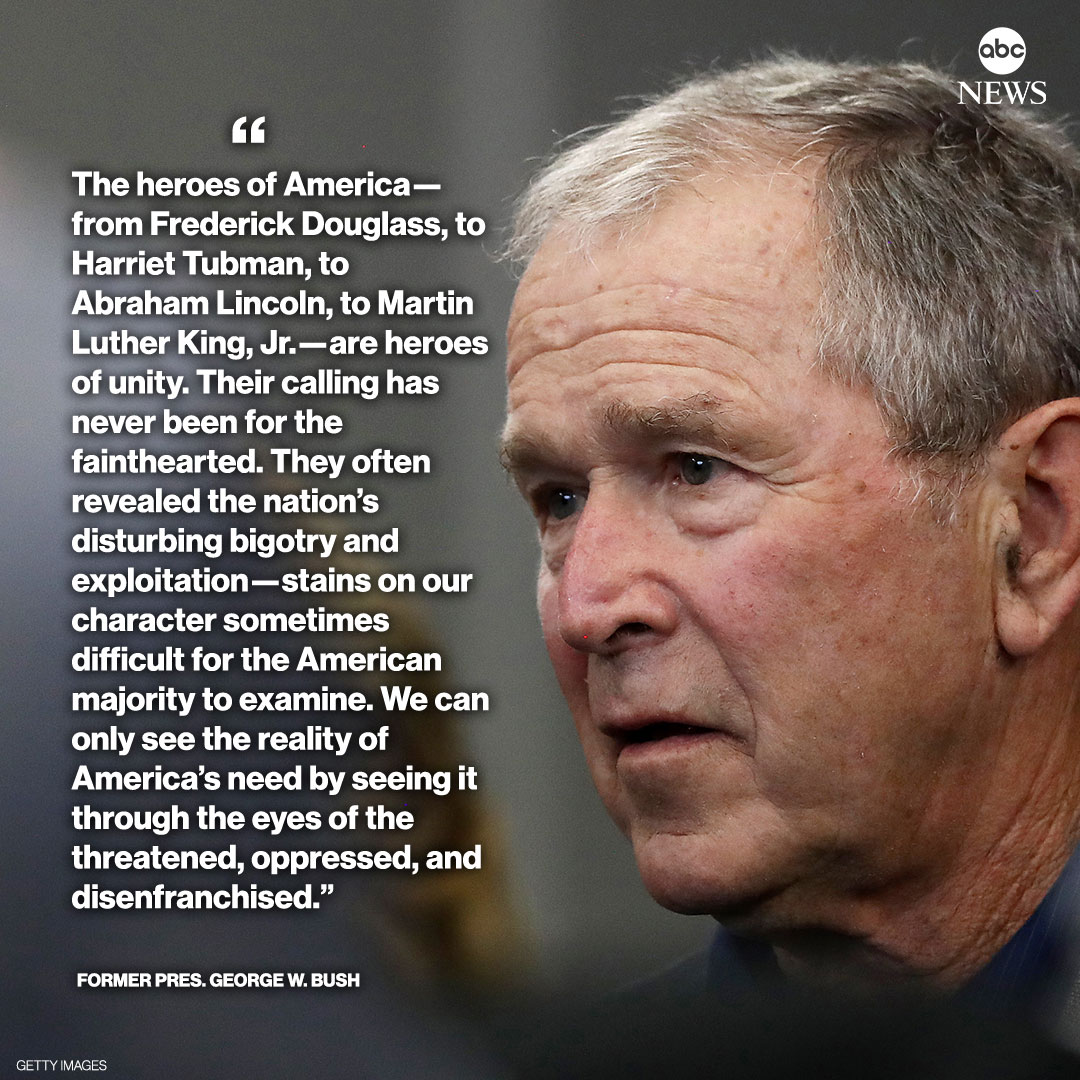 @politico
George W. Bush is calling for a national examination of “tragic failures” in the realm of racial injustice following a week of protest over the police killing of an unarmed black man in Minneapolis https://t.co/924RHjPsBr
03 Jun, 03:30 AM UTC