@jimmyfailla
Green Day singer Billie Joe Armstrong says he’s renouncing citizenship and moving to the UK over the repeal of Roe V Wade. Someone should probably tell him Europe has much stricter abortion limits than the U.S. does. Actually, on second thought …
26 Jun, 07:25 PM UTC

@RyanGirdusky
He's renouncing his US citizenship and moving to the UK which has stricter abortion laws than his home state of California... brilliant, I hope he takes his friends with him https://t.co/RlktkRw4DB
26 Jun, 07:59 PM UTC

@JackPosobiec
Acts like Pink and Green Day making big and dumb statements on the Roe ruling are just trying to get people to talk about them since they haven't been relevant in 20 years
27 Jun, 01:30 AM UTC

THE Red-Headed libertarian™
@TRHLofficial
The lead singer of Green Day is renouncing his US citizenship for the UK over the Roe strike. While England, Scotland, & Wales have 24 week abortion cut offs, Northern Ireland bans abortion at 12 weeks, which is as strict as, or stricter than, 29 of the US states, plus DC.
26 Jun, 10:11 PM UTC

Feisty Feline 🍊
@TheJellicleCats
Raise your hand if you think Pink and Green Day both suck. 🤚🏻
27 Jun, 12:26 AM UTC

@JonahDispatch
So he's moving from California, where there are essentially no restrictions on abortion, to the UK where restrictions kick in after 24 weeks. Okay. https://t.co/xrF6QbEPBS
27 Jun, 12:34 PM UTC

@HuffPost
“There’s just too much f**king stupid in the world to go back to that miserable f**king excuse for a country," Billie Joe Armstrong told a British crowd. https://t.co/lXRFulIcFI
26 Jun, 11:55 PM UTC

multispace
@xdistorteddx
🔪 How are there conservatives mad at Billie Joe Armstrong when half of Green Day is queer and they've always spoken up on human rights?? They literally made an album called American Idiot about you people 💀 Are Republicans really that fucking dense?
26 Jun, 08:45 PM UTC

punished tiger, shining wizard
@napmastermage
Right-wingers are trending "Good Riddance" in response to the Green Day guy renouncing his citizenship and there is no way they're clever enough to have made that joke on purpose
27 Jun, 02:04 PM UTC

The Frank
@frank_triniti
That's fine, motherfucker, you can get the hell out. It'll be the last thing you ever do as a free man. 'F**k America': Green Day star claims he's renouncing his citizenship https://t.co/REVKvOfx5f via @MailOnline
27 Jun, 01:06 AM UTC

@TalkTV
Green Day frontman Billie Joe Armstrong has revealed he is “renouncing” his US citizenship at a concert in London, following the recent overturning of Roe v. Wade. 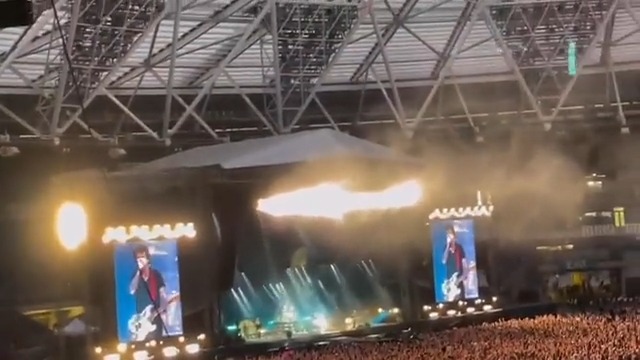