@AndrewSolender
NEW: ex-Trump official Lynne Patton fined $1000 and barred from federal employment for 48 months for violating the Hatch Act by using her HUD role to create a video for the 2020 RNC. 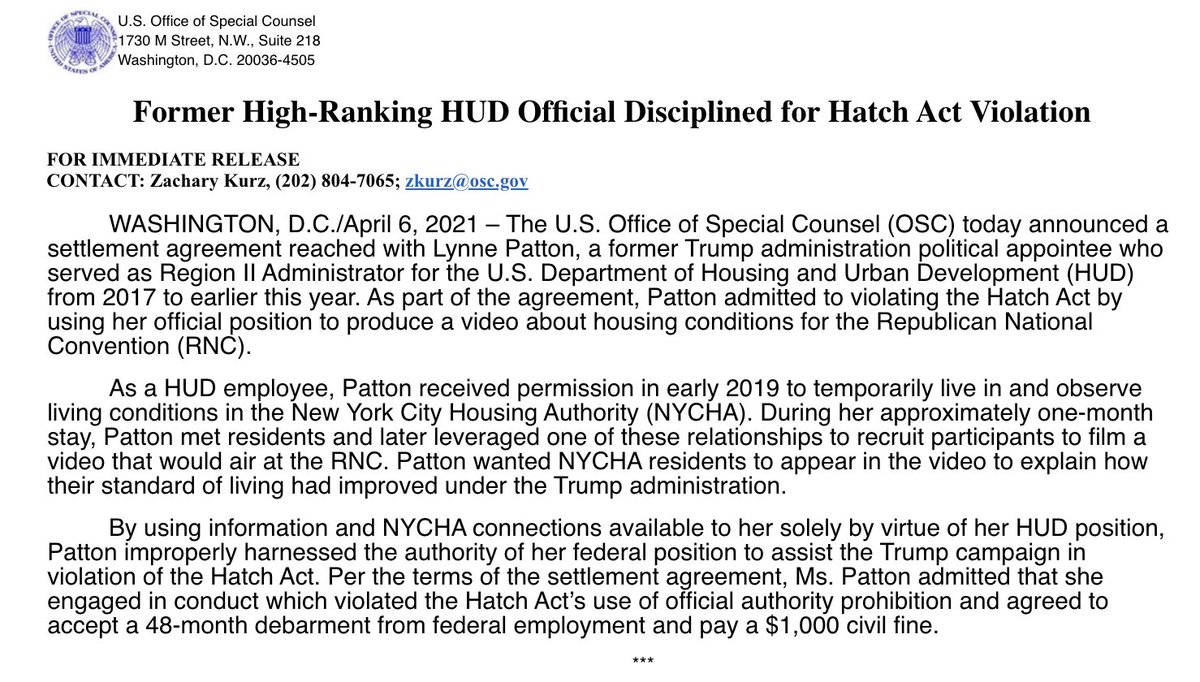 @kylegriffin1
U.S. Office of Special Counsel: Lynne Patton, the former Trump appointee who served at HUD, has been disciplined for violating the Hatch Act. Patton admitted to violating the Act and has agreed to accept a 48-month debarment from federal employment and pay a $1,000 civil fine.
06 Apr, 03:30 PM UTC

@keithboykin
I am no fan of Lynne Patton, and she clearly violated the Hatch Act. But so did Kellyane Conway, Ivanka Trump, and nearly everyone else in the Trump administration. Why is the Black woman the only one being punished? https://t.co/OugGmWJfBM
06 Apr, 04:16 PM UTC

Andrea Junker ®
@Strandjunker
Lucky for Kellyanne Conway that she’s just a white ex-Trump official up to her eyeballs in Hatch Act violations, and not, let’s say, a black ex-Trump official like Lynne Patton.
06 Apr, 05:18 PM UTC 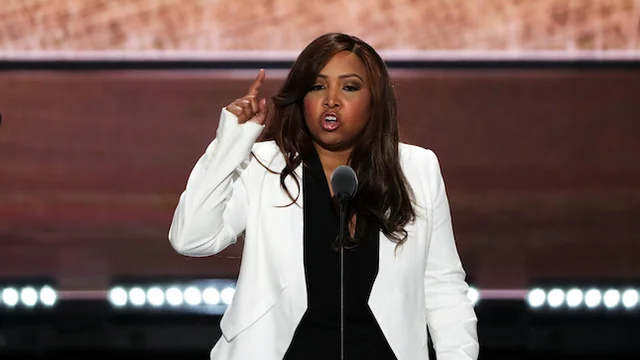 @hassankanu
for comparison, Kellyanne Conway 1. violated Hatch Act at least 10X, per OSC 2. said of those violations “blah blah..let me know when the jail sentence starts" 3. refused to show at Congress hearing for violations, then defied subpoena 4. had her termination recommended by OSC https://t.co/2SpKnmtTHB
06 Apr, 10:05 PM UTC

Trent Capelli 🇨🇦🇮🇹
@TrentCapelli
Kellyanne Conway and Ivanka Trump violated the Hatch Act repeatedly under Trump. Nothing. Lynne Patton was fined $1000 and barred from federal employment for 48 months. I’m all for accountability, but the difference here is black and white.
06 Apr, 08:56 PM UTC

@PalmerReport
There is no reason whatsoever to conclude that Ivanka and Kellyanne "got away" with their Hatch Act violations. For all we know, today's Hatch Act enforcement against the HUD official could be just the start of several such enforcements.
07 Apr, 12:35 AM UTC

@JoyceWhiteVance
This is a good first step. The Hatch Act is essential to a functioning democracy. Others who violated it should be sanctioned. https://t.co/NDZ0Blb3CU
06 Apr, 06:57 PM UTC

Ross Ginsberg
@RossGinsberg
@AndrewSolender So does the Hatch Act only apply to lower level people in government? Higher level Trump folks (and Trump himself) violated the Hatch Act on a weekly basis.
06 Apr, 02:45 PM UTC

@AndrewSolender
Patton joins a small group of Trump political appointees punished for Hatch Act violations. She is just one of several Trump officials accused of violations during the conventions. https://t.co/qOlktOibZv
06 Apr, 03:16 PM UTC

@waltshaub
The Interior Department made 2 videos that were obvious campaign ads for Trump. No one at the Interior Department was held accountable. Over at HUD, Lynne Patton did the same and became the only Trump appointee fined for a Hatch Act violation. Why Patton? https://t.co/3CfAHQmmpd
07 Apr, 11:22 AM UTC

@waltshaub
Here's a list of Trump appointees OSC claimed violated the Hatch Act. I don't think this is even a complete list. But I think OSC assessed a fine against only one of these individuals. @chipfranklin
Former Trump official Lynne Patton can no long work for the federal government for a Hatch Act violation – lying and misrepresenting Americans while working for the executive branch. Raise your hand if you think Trump should be banned next. ✋
06 Apr, 11:03 PM UTC

@waltshaub
@AprilDRyan April, why do you suppose Patton was the only Trump official fined and banned for a Hatch Act violation when so many others violated it?
07 Apr, 11:23 AM UTC

@anitakumar01
From OSC: "Per the terms of the settlement agreement, Ms. Patton admitted that she engaged in conduct which violated the Hatch Act’s use of official authority prohibition and agreed to accept a 48-month debarment from federal employment and pay a $1,000 civil fine." https://t.co/YBE0GE0pZn
06 Apr, 03:32 PM UTC

@waltshaub
Here's another odd feature of this decision. OSC often closes investigations when someone leaves government. I don't agree with that practice, but it bears noting they closed a Hatch Act violation of Comey when he left government. I'd like to see statistics on such closures.
06 Apr, 03:55 PM UTC

@waltshaub
Note: OSC issued a policy in 2018 saying it has discretion as to closing a case after an official quits. But the policy's subjective and creates potential for abuse. (Embarrassingly, the policy incorrectly says the max fine is $1,000, which is wrong. LOL) https://t.co/4lpn5brpnT

I Smoked Matt Gaetz Didn't Kill Himself
@BlackKnight10k
It's really strange that everyone is so concerned about how Kellyanne Conway violated the Hatch Act a gazillion times but no one cares that she put her teeneaged daughter's topless pics on the internet like some kind of Matt Gaetz impression.
07 Apr, 12:57 PM UTC

@CREWcrew
It's great that so many people are now interested in the Hatch Act. Did you know that following CREW's complaints, OSC took the unprecedented step of recommending that Kellyanne Conway be removed from federal service? https://t.co/DCb9mGhXuY
07 Apr, 01:24 PM UTC

@CREWcrew
Here’s an ethics win: Lynne Patton has a four year ban from federal employment and paid a $1000 fine after she was found to have violated the Hatch Act. https://t.co/kr2aTqP575
07 Apr, 01:00 PM UTC

@glennEmartin
I'm no fan, but it doesn't get lost on me that there were myriad Hatch Act violations from Trump's ppl, but so far only this Black woman get's held accountable & this is what I absolutely HATE about elite progressives when they talk abt accountability. White wo/men get a pass. https://t.co/e2uT3q3bFS
06 Apr, 05:51 PM UTC

Randy B🏳️‍🌈🌏🌊🐕🌲✌
@RandyBroResist
Exactly who makes the decisions about who gets penalized for violating the Hatch Act?
07 Apr, 01:25 PM UTC