Hawley is trending on Twitter. Popular tweets on Hawley.

Tristan Snell
@TristanSnell
Doesn’t Josh Hawley live in Virginia? How is he a senator from Missouri? 🤔
14 Sep, 08:06 PM UTC

Layla Benson
@BaelaLayla
Josh Hawley’s roommate from college said Josh used to narc on them for smoking weed in the dorms, and when someone did something lame they called it “pulling a Hawley.” This isn’t even a joke lol, just thought I’d share
14 Sep, 04:18 PM UTC

@hugolowell
New: Republican Sen. Josh Hawley says he won’t vote to confirm any Biden nominations for the State or Department of Defense until SecState Blinken and SecDef Austin resign over US withdrawal from Afghanistan
14 Sep, 04:06 PM UTC

@brhodes
Hawley spotlighting another dumb Senate rule that should change - why can one fascist Senator hold up nominations of serious people for serious positions just to get attention? https://t.co/atjam6MkBs
14 Sep, 04:02 PM UTC

Avenger Resister
@AvengerResister
I’m officially asking Josh Hawley to resign because he does not live in Missouri. RT if you agree.
14 Sep, 09:05 PM UTC

@ElieNYC
A fascist who supported a coup d'etat won't consent to Department of Defense or State nominees until everybody else acquiesces to his whims? This is only news if you are unfamiliar with Josh Hawley. https://t.co/BJiBL7n35l
14 Sep, 04:47 PM UTC

@HawleyMO
Proud to endorse my friend @JDVance1 for the US Senate. He will be the principled fighter the working people of Ohio deserve https://t.co/xT7RqGRiiy
14 Sep, 12:04 PM UTC

🖤🦋Rowan Moon🦋🖤
@oXxRowanxXo
A moment to remind that Josh Hawley doesn't belong in the Senate, but behind bars. #Truth2Voice
14 Sep, 02:06 PM UTC

@hugolowell
Republican Sen. Josh Hawley says now he won’t confirm any Biden nominations until Austin and Blinken resign — but Hawley refused to confirm pretty much every single nomination so this is an empty threat
14 Sep, 04:11 PM UTC

The Lincoln Watchman🎩🇺🇸🏴‍☠️
@LincolnWatchman
Josh Hawley lives in Virginia and uses his SISTER’s address in Missouri as his “legal residence.” So, yea, Al Franken sure as hell can pick whatever state he’d like to run in for the U.S. Senate. Just make sure you have a “legal residence” there, Al. 😉 Am I right??
14 Sep, 11:16 AM UTC

༺🦋༻ᗰᗩƳᖇᗩ༺🦋༻
@LepapillonBlu
How many of you agree that Sen. Josh Hawley is a traitor, a white supremacist, and an insurrectionist, and that he should be in prison?
14 Sep, 05:04 PM UTC

Uncovering The Truth
@UncvrngTheTruth
Josh Hawley gave the white power sign to a mob of Insurrectionists. Then, after being instructed not to, he voted against certifying the election results again. Josh spread the big lie and riled up the MAGAs who went on to kill 2 cops. Josh has blood on his hands. Expel him.
14 Sep, 02:26 PM UTC

@votevets
Each of these departments remain gutted after the Trump administration. They each need nominees quickly approved. Hawley's grandstanding hurts our security. But what else do you expect from a traitor? https://t.co/pJbJyYsn19
14 Sep, 04:08 PM UTC

Ricky Davila
@TheRickyDavila
Months after committing sedition and inciting insurrection, both white supremacist Josh Hawley and Rafael Ted Cruz continue to block important nominations for both Dept of State and Dept of Defense because when domestic terrorists aren’t punished for their crimes, they do worse.
14 Sep, 04:16 PM UTC

@mkraju
GOP Sen. Josh Hawley says he will place a hold on "every single civilian nominee" for the State and Defense departments unless Blinken and Austin resign. He said that his holds will apply to any civilian nominee at the deputy and secretary levels, as well as ambassadors.
14 Sep, 05:46 PM UTC

Jason Overstreet
@JasonOverstreet
The dick of the day trophy goes to domestic terrorist Josh Hawley for saying that the president’s behavior is “disgraceful” and that he has “dishonored this country.” They need to put this motherfucker under a prison, far away from inmates who are not traitors. #DickOfTheDay 🏆
14 Sep, 08:37 PM UTC

@thehill
Sen. Josh Hawley: "This president is a disgrace. His behavior is disgraceful. He has dishonored this country with his shameful leadership in this crisis and it is time for him to resign." https://t.co/tmQaBLmWjO 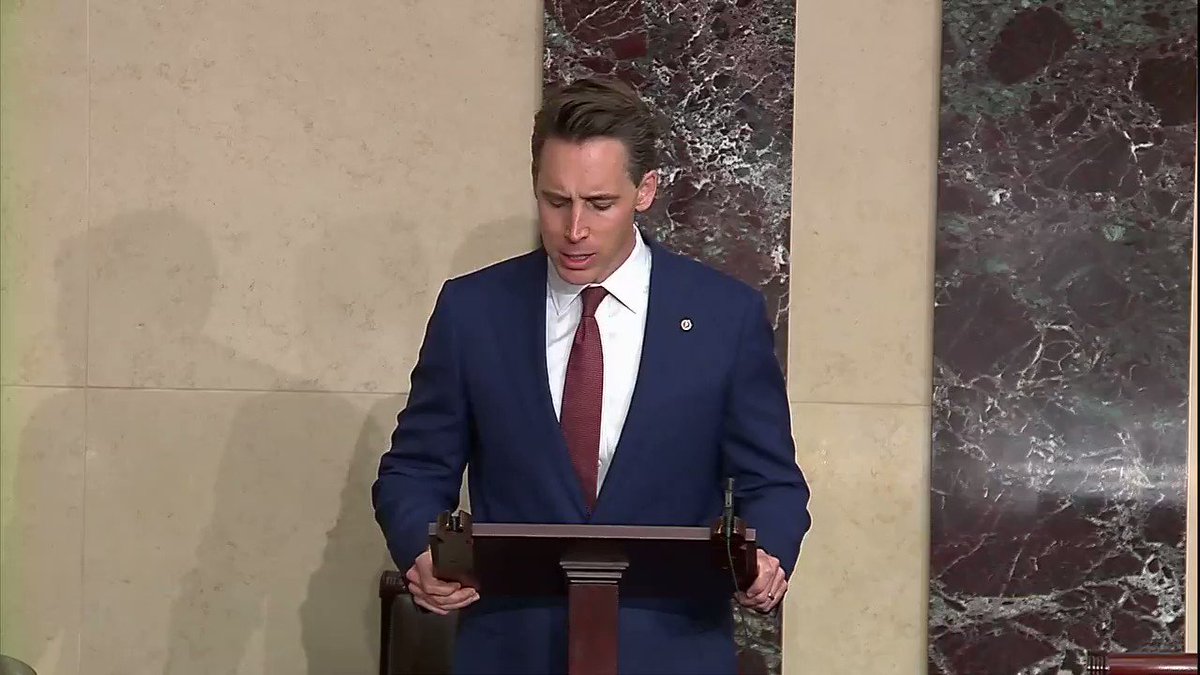 @PoliticusSarah
"Domestic terrorism inciter Sen. Josh Hawley has jeopardized national security by threatening to block every State and Defense nominee unless the Sec. of State and Sec. of Defense resign." https://t.co/b99sa8qPTd via @politicususa
14 Sep, 09:55 PM UTC

@GovHowardDean
The senate rules could be changed with a simple majority to stop Cruz and Hawley from bringing the Senate appointment process to a halt, if I’m not mistaken. https://t.co/efh1Qggtgr
14 Sep, 11:10 PM UTC

@PoliticusSarah
“Republicans have no loyalty to the country or the troops. People like Josh Hawley are doing everything in their power to weaken and destroy America because they refuse to accept that they were rejected by the voters in 2020.” https://t.co/pBggkd2sXZ
14 Sep, 11:06 PM UTC

We HearVoicesOutThere
@WeHearPodcast
Hawley is the poster boy for the GOP. White, full of shit and a hater of our democracy. You know what to do, America. Vote this frat hazing boy out of office. Make sure to raise your fist after you vote against him. #wtpBLUE #DemVoice1 #DemCast https://t.co/8UrHWIjRa0
14 Sep, 11:35 PM UTC