@murdo_fraser
Wasn’t there supposed to be thousands at this pro-independence rally at Holyrood? There’s barely 200 there, and take out the SNP staffers and that leaves a few dozen dejected souls. It’s over.
23 Nov, 06:12 PM UTC

@AngusMacNeilSNP
Independence is now in the gift of the Scottish Gov. They can create a Holyrood Election anytime in next few months under Sec 3 of the same 1998 Scotland Act that was judged on today against a ref! Things have changed and changed utterly. Possibilities abound.🏴󠁧󠁢󠁳󠁣󠁴󠁿👍
23 Nov, 07:10 PM UTC

Jim Spence
@JimSpenceDundee
I suppose the SNP MP’s could do a Sinn Feinn and withdraw from the ‘oppressor’ parliament at WM and return to their constituencies…..and also the SNP could call a fresh election at Holyrood with independence as their sole manifesto commitment. That would sort the matter out 😎
23 Nov, 01:39 PM UTC

@GillianMSP
Huge crowd of independence supporters outside Holyrood. The people must decide! 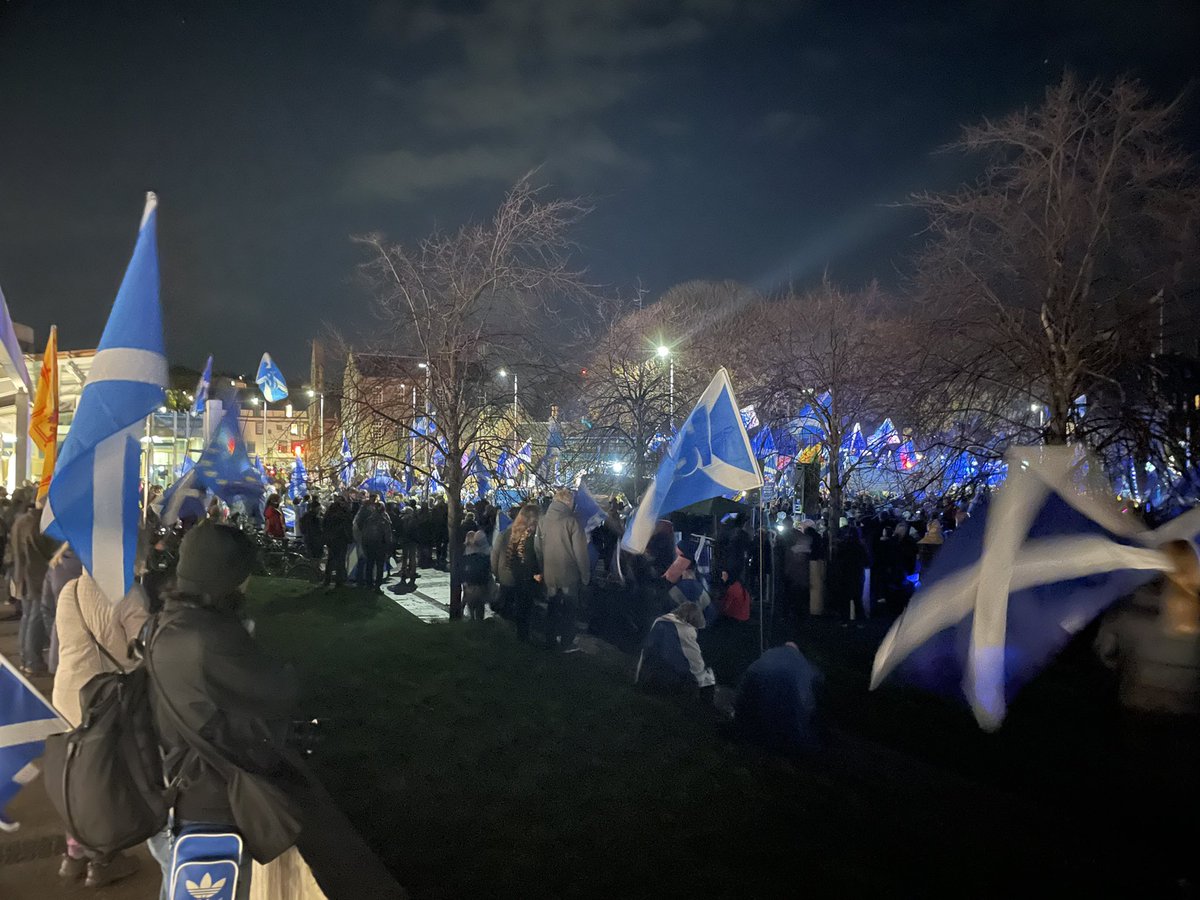 @AngusRobertson
👎🏼It is simply incorrect to say there is no mandate for #IndyRef2. 🗳️The test for legitimacy in 2014—a majority of pro-#ScottishIndependence MSPs elected at Holyrood—has been met. 🏴󠁧󠁢󠁳󠁣󠁴󠁿Democratic precedent dictates what we should do now: agree a Sec.30 order & have a referendum. 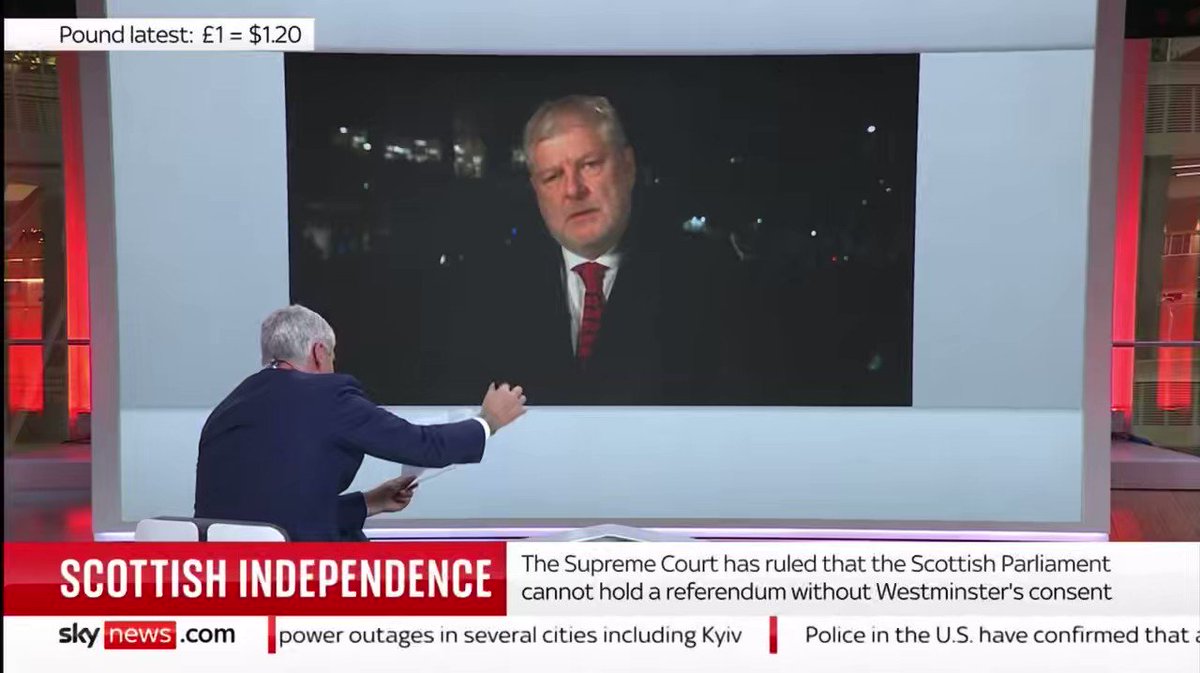 𝚂𝚞𝚣𝚊𝚗𝚗𝚎 𝙱𝚕𝚊𝚌𝚔𝚕𝚎𝚢 🏴󠁧󠁢󠁳󠁣󠁴󠁿
@scottishlass481
Will the FM be willing to resign to force an early Holyrood Election fought on the issue of Independence?
23 Nov, 10:40 AM UTC

KatB🐝🐝🐝 #WomenWontWheesht
@Kat_Bee_123
Why is Sturgeon waiting for a U.K. General Election for her kiddy on referendum? Why isn’t she dissolving Holyrood and calling for a scottishy election? Answers on a postcard.
23 Nov, 07:10 PM UTC

Alan Ferrier / @alanferrier@mastodon.scot
@alanferrier
Eight years ago, Gordon Brown urged Scots to vote No for “faster, safer, better change” within the UK. A “modern form of Home Rule" that's the “closest thing to federalism”, with Holyrood “handed equal status to Westminster.” “This is a promise we will keep,” he said.
23 Nov, 03:57 PM UTC

Major Spartacus
@SpartacusLives
Can we now raise actions against the Scottish Government for mis-use of taxpayer's funds? If not for time wasted on this to-date but any time they waste at Holyrood on this going forward? "The People of Scotland vs The Scottish Government" has a nice ring to it. https://t.co/h6Gg1Eqiao
23 Nov, 11:50 AM UTC

Vicky Thompson
@VThomps11168091
This may just shift things. Good to see a reference to Holyrood REFUSING TO MEET female survivors of sexual violence. I don't know how @NicolaSturgeon @ShonaRobison @patrickharvie @lornaslater can bear to look at their guilty faces in the mirror this morning. https://t.co/jZ7V45s0AO
23 Nov, 09:05 AM UTC 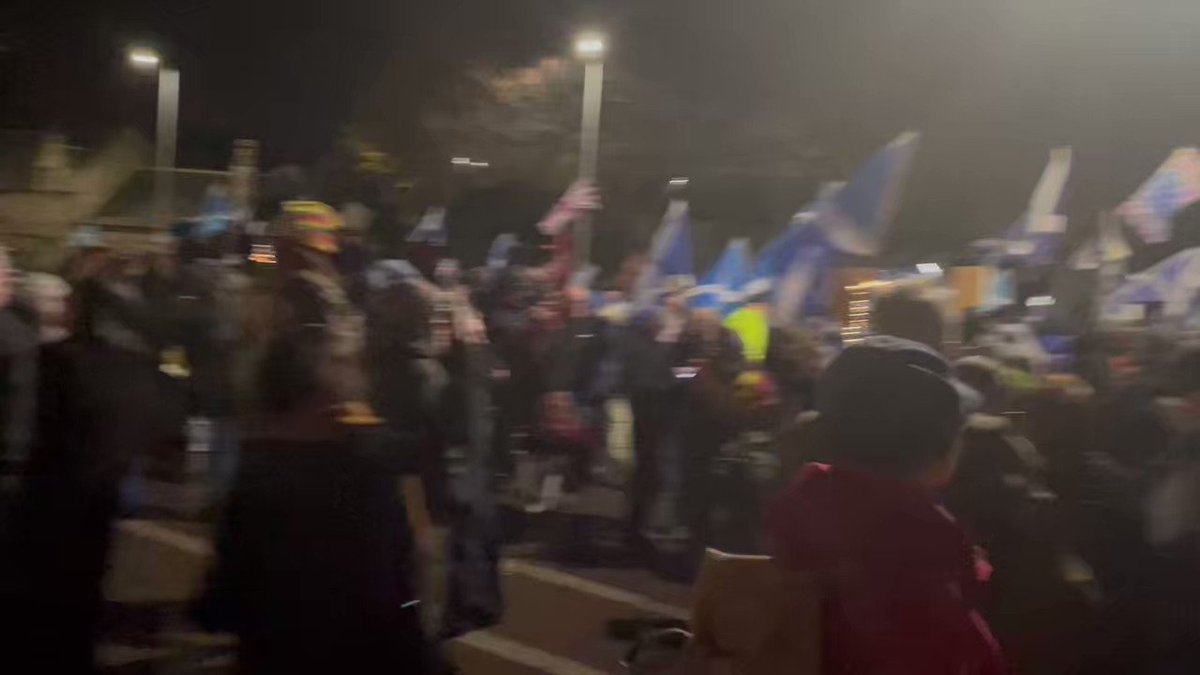 @lokiscottishrap
I look at Angus Roberston on the news arguing that Scotland is being denied democracy but something about it just isn't landing. There's an insincerity at play. SNP has been riding two horses with one arse for too long. Plucky rebels in WM, neolib technocrats at Holyrood.
23 Nov, 10:45 PM UTC

Hugh Moan 💙
@weeshug72
@C4Ciaran @Douglas4Moray @Channel4News Douglas lied when he told C4 News the last Holyrood election wasn't about an independence referendum. He himself said "a vote for @theSNP is a vote for a second independence referendum". So you told a lie tonight didn't you Douglas? Liar representing a party of liars
23 Nov, 09:01 PM UTC

@magnusllewellin
🔺Exclusive: Public money will continue to be used to make the case for Scottish independence despite the Supreme Court ruling that a referendum is not within Holyrood’s powers. https://t.co/pxxPxz6iVb
24 Nov, 06:20 AM UTC

MSM Monitor
@msm_monitor
Should the SNP & Greens step down from government at Holyrood and force a Scottish election where both stand on the single issue of Scottish independence? RT for as wide a participation as possible please. 🏴󠁧󠁢󠁳󠁣󠁴󠁿
24 Nov, 07:12 AM UTC

ISP - Independence for Scotland Party
@IndyScotParty
Should the Scottish Government go ahead with a plebiscite, it would be far preferable to choose Holyrood as its battleground, rather than Westminster. Holyrood is our turf and under our control. 4/7
23 Nov, 12:49 PM UTC

WH62SKY
@KeithHe98431354
Sturgeon playing X Factor at TWO Rallies yesterday but did not have the time to answer questions in Holyrood. Meanwhile the Teachers strike today, The NHS pay deal hasn’t been settled and Humza is still Health Minister. The SNP have let down the Scottish People. Shameful
24 Nov, 07:23 AM UTC

ISP - Independence for Scotland Party
@IndyScotParty
However, the judgement has this virtue; it is clear. It would have been worse had it been 'mibbees aye, mibbees naw'. It draws a line under Section 30 and it prepares us for going to the Hague. We expect that Holyrood will give this and other indy routes its full attention. 2/7
23 Nov, 12:49 PM UTC

Jonathan Rowson
@Jonathan_Rowson
It's interesting to ask what's *really* going on with the reaction to the Supreme Court Ruling today. Because it's not as if anybody in Scotland particularly wanted a consultative referendum conducted by Holyrood without Westminster's approval.🧵 👇
23 Nov, 10:25 PM UTC

Andrew Ewen
@AndrewEwen_
Was a cracking atmosphere at Holyrood last night. One of many #TimeForScotland events across the country. The campaign for #independence moves to a new phase. We are determined and resolute 🏴󠁧󠁢󠁳󠁣󠁴󠁿 #IndyRef2 https://t.co/HFKHPOt81y
24 Nov, 08:08 AM UTC

David Clater 🦖
@SpawnofJustice
@Emma_Roddick Bollocks. The SNP are a minority administration at Holyrood. You had to buy the Scottish Greens to make up your numbers. And mandate? Holyrood is a devolved administration with myriad local responsibilities. There was no binary vote for another toxic, divisive Referendum.
23 Nov, 06:44 PM UTC

Euan McGlynn Alba Party (Isobel Gowdie)
@euan_mcglynn
Tonight I was at Holyrood, our FM spoke no fire, no passion, no answer, no plan, just empty sound bites, with empty promises, more carrots and gravy, at least Alex was honourable and resigned.
24 Nov, 12:02 AM UTC

@HolyroodDaily
"The SNP appears to have all but given up on making a positive case for independence, preferring to focus on grievances," says @ProfJMitchell https://t.co/HS4d46wCi7
24 Nov, 08:13 AM UTC

Becky Argyle
@ArgyleBecky
Alister Jack reminds Blackford that during the 2021 Holyrood election only one third of the Scottish electorate voted for the SNP - FACT. https://t.co/MjHmUvIWrZ
23 Nov, 11:09 PM UTC

Dave Watson
@UnisonDave
The Guardian view on Scotland and the constitution: The SNP does not want voters to judge it by its management of the public services that come under its remit. Even many inclined to support independence can think of better things for Holyrood to be doing. https://t.co/Say5Pd2n29
24 Nov, 07:48 AM UTC