#Huskers is trending on Twitter. Popular tweets on #Huskers.

Samuel Hahn
@daHAHNi
The level of excitement for today I’ve seen from friends, co-workers, community members and Nebraskans in general show why we fought so hard for a season! Excited to watch the boys today! #GBR #Huskers
24 Oct, 11:49 AM UTC

Derek Peterson
@DrPeteyHV
Scott Frost: "I thought we did a lot of good things. Unfortunately a lot of the things that led to the game getting out of hand were self-inflicted. "... We hung in there with them physically." #Huskers
24 Oct, 07:37 PM UTC

@Husker247BC
#Huskers with two fumbles in Buckeye territory today – one returned the other way for a touchdown. And one missed layup on a third-and-goal that took away four points. There's good: They've run for 221 so far. They moved it. Gotta find those finishing touches.
24 Oct, 07:06 PM UTC

@DanCorey1011
If you expected progress, you got it. Penalties/turnovers continue to crush Nebraska, but the eyes don't lie. This team is way improved from previous years. #Huskers
24 Oct, 07:22 PM UTC

Nick Gregath
@Husker_Nick
This Ohio State team is really good... national championship #Huskers teams plastered plenty of really good CFB teams during their run. Nebraska looks better and will be fine. Next week is the big week for this program.
24 Oct, 07:22 PM UTC

Parker Gabriel
@HuskerExtraPG
Scott Frost: "I thought we did a lot of good things and unfortunately some of the things that led to the game getting out of hand were self-inflicted." #Huskers
24 Oct, 07:36 PM UTC

Sam McKewon
@swmckewonOWH
JoJo Domann: "We’ve got to be smart when it’s hits outside the box against defenseless receivers." #huskers
24 Oct, 07:58 PM UTC

Jacob Padilla
@JacobPadilla_
Scott Frost didn't have an update on Jack Stoll during his postgame presser. Said he hadn't heard anything yet. #Huskers
24 Oct, 07:46 PM UTC

Parker Gabriel
@HuskerExtraPG
Adrian Martinez: "Luke's a really talented player and we're going to continue to find ways to get him involved." Said he was expecting McCaffrey to be heavily involved in the game plan. #Huskers
24 Oct, 08:06 PM UTC

@HuskerSports
Here's what @C_millz31 had to say about the physicality of the game and what the #Huskers need to transfer over to next week. Locker Room covered by @pacificlife 🐋 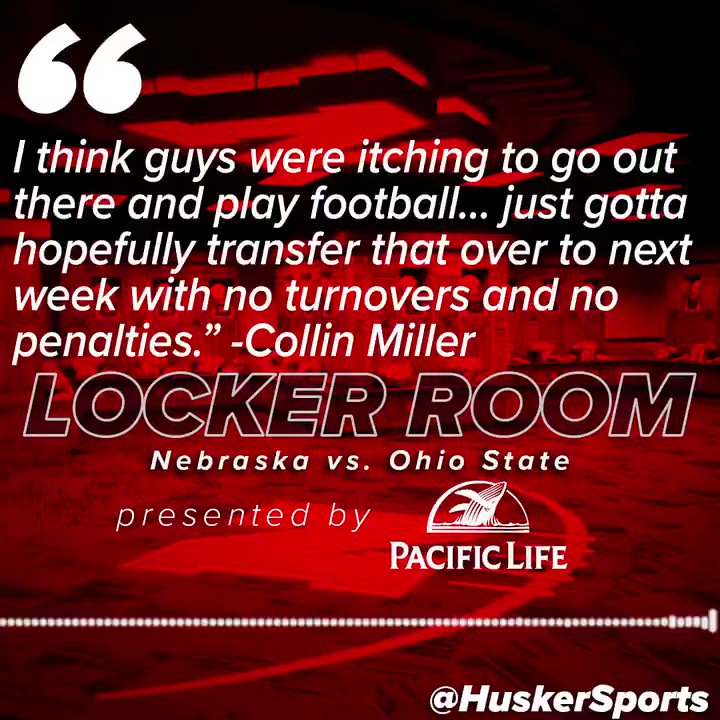 Kelsie Kasper
@kelsie_kasper
POST: Head coach Scott Frost talks about getting dealt the hardest Week 1 game after losing 52-17 against OSU. "I think we definitely matched up better than we did a year ago" #Huskers https://t.co/yFG7dHaRYi
24 Oct, 08:12 PM UTC

Sam McKewon
@swmckewonOWH
Our first report card from the 2020 football season. I think Nebraska's D played better than most of you probably do. https://t.co/E3XU0Nk3sR #Huskers
24 Oct, 08:12 PM UTC

Husker Extra
@huskerextra
Check out photos from the first half of #Huskers-#Buckeyes in Columbus, Ohio https://t.co/ydL7unCQtL https://t.co/7pJ2g12amE
24 Oct, 06:34 PM UTC

Nate McHugh
@nmchugh85
I don't get it Nebraska fans. What did you expect to happen against Ohio State? There are obvious flaws on this Nebraska football team but if you didn't see a substantial improvement compared to the team last year then I don't know what to tell you. #Nebraska #Huskers
24 Oct, 08:08 PM UTC

Nick Handley
@NickESPN590
A lot to discuss on Monday about the #Huskers loss to Ohio State but I for one, couldn't be more excited to finally be able to react to an actual game. Win or lose.
24 Oct, 08:10 PM UTC