@BleacherReport
Ime Udoka allegedly made unwanted comments toward a female staffer which prompted an internal investigation. Some Celtics staffers became aware of Udoka's relationship with the woman in July but thought it was consensual, per @ShamsCharania. 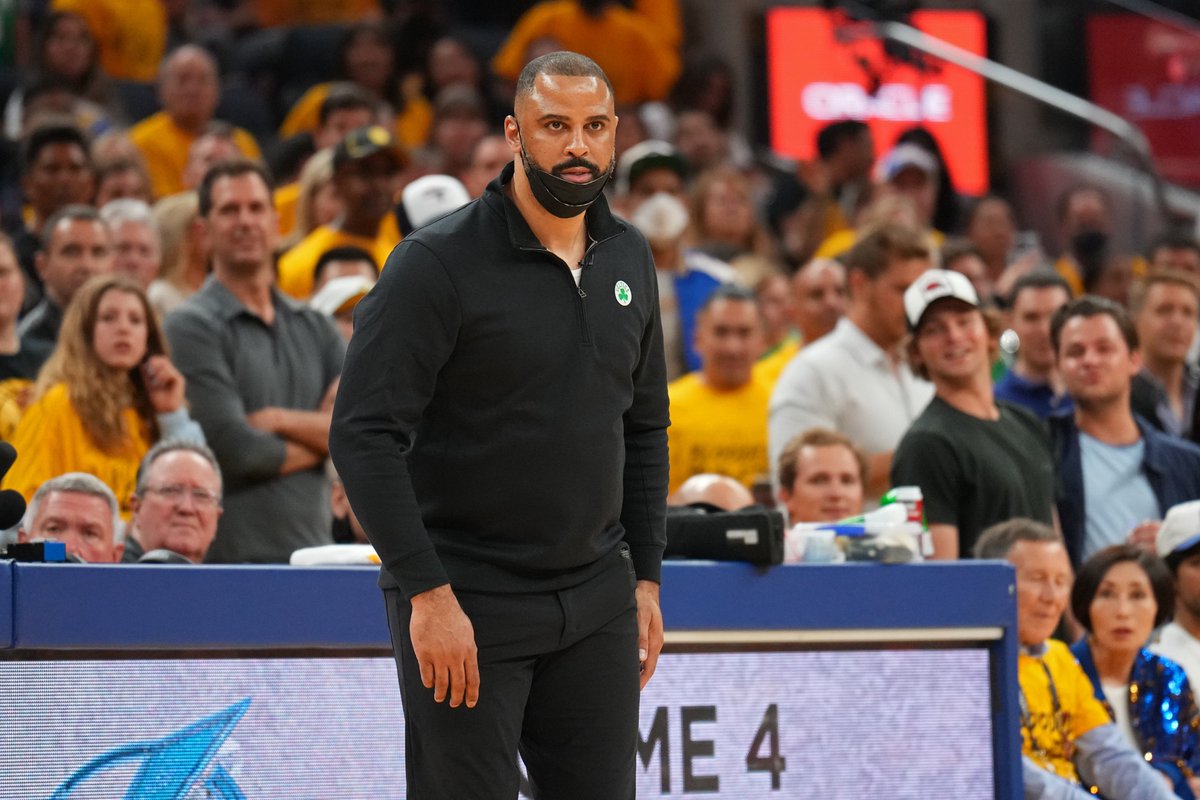 Legion Hoops
@LegionHoops
Adrian Wojnarowski on Ime Udoka: "In talking to some other organizations today, he may become a candidate…of interest for other jobs that… might become open during the season or certainly next season." (via @SportsCenter) https://t.co/heYb4u3pCB
23 Sep, 03:27 PM UTC

@ItsMikeHill
I wish y’all would give the same energy and exposure to Brett Favre & Mississippi as you seem to be giving to Ime Udoka, the Celtics & #NiaLong I mean Favre screwed a whole state
23 Sep, 06:01 PM UTC

Gifdsports
@gifdsports
Stephen A Smith responds to Malika Andrews accusing him of blaming women "I don't appreciate where you're going with that I'm not blaming anybody but Ime Udoka" "I listened to you, you're the one telling me to stop on my show that ain't happening" https://t.co/upXT50rEpc
23 Sep, 04:05 PM UTC

Dark Gable
@DarkGable198
Malika Andrews responds to Steven A Smith is an example of toxic femininity. When the argument wasn't going in the direction she liked, she weaponized victimhood to gain leverage in an argument with a man. He was not "victim blaming" because IME UDOKA mistress is not a victim.
23 Sep, 05:58 PM UTC

NBA Memes
@NBAMemes
Jayson Tatum and Jaylen Brown realizing they're back to being a low seed without Ime Udoka https://t.co/RAOjITPKn2
24 Sep, 04:58 AM UTC

Alexandrovna
@AlexandrovnaIng
one thing men will never understand is 90% of the reason that woman had an affair with ime udoka is because of nia long. the woman on your arm will attract other women (devilish ones), she doesn't want you she wants to strike at the heart of your woman.
23 Sep, 05:01 PM UTC

@nrarmour
The women who work for the Celtics will forever be tainted by the 36 hours when they were dragged through the digital town square and team executives said nothing. So spare me Wyc Grousbeck and Brad Stevens' belated thoughts and prayers. https://t.co/ILVB4u1BLr
23 Sep, 08:58 PM UTC

@BostonGlobe
.@SincerelyJenee wonders if we'll ask ourselves why we care more about Ime Udoka's behavior than we care about the millions of dollars that were allegedly stolen by officials, celebrities, and others in Mississippi. https://t.co/0Gost0Wl4l
23 Sep, 07:53 PM UTC

The Disordered Cosmos by Chanda Prescod-Weinstein

@IBJIYONGI
The discourse about which woman Ime Udoka had an affair with and subsequently harassed tells us a lot about patriarchy, misogyny, and people’s ability to distinguish between reported facts and rumors
23 Sep, 02:02 PM UTC

Trisha Clerk 📚 Essential Bookstore, Owner
@TClerk
This Ime Udoka stuff is wild, But Jackson, Mississippi and a city of 85+% Black residents (including my family) being screwed by the State welfare chief with Brett Favre ties is devastating. Even ex-governor Phil Bryant is tied to this. Disgusting 🤨 #BrettFavreWelfareKing https://t.co/BRIHhRQMne
24 Sep, 12:01 PM UTC