Jeff Tiedrich
@itsJeffTiedrich
a ten year old child was raped in Ohio and had to travel to Indiana to get an abortion. how did Republicans respond? by outlawing abortion in Indiana. fucking ghouls
06 Aug, 02:16 PM UTC

@JRubinBlogger
If you are a college student considering Univ. of Indiana, Purdue, Notre Dame rethink your choice unless you plan on taking a vow of celibacy.
06 Aug, 05:19 PM UTC

@byKateSmith
Wow After the passage of Indiana’s total abortion ban, Eli Lilly, one of the state’s biggest employers, says they’ll be planning their growth outside the state. Because DUH how are you going to recruit women, aka HALF the population, to a state that outlaws their health care?!? @mmpadellan
Fuck Indiana and its anti-woman laws. BRAVO to Eli Lilly, one of Indiana's largest employers, for deciding to grow its business anywhere but Indiana.
06 Aug, 04:39 PM UTC

Lindy Li
@lindyli
Indiana’s near-total abortion ban is officially law Women will be forced to carry DEAD FETUSES to term We now have fewer rights than non-viable fetuses Do not mince words. These freaks don’t deserve the veneer of respectability ChristoFascism is a cancer & it’s metastasizing
06 Aug, 05:40 AM UTC

@VP
Indiana passed a near-total abortion ban yesterday. By the time a woman realizes she's pregnant, she will effectively be prohibited from having access to reproductive health care. This is an absolutely shameful decision made by the Indiana legislature and governor.
06 Aug, 04:19 PM UTC

@VP
But let's be clear about this—the majority of Americans believe that the government should not mandate to women what to do with their bodies. The Indiana legislature should not be making the personal health care decisions of women in their state.
06 Aug, 04:19 PM UTC

@byKateSmith
I’ll be very curious about application numbers this fall for colleges and universities in states that ban abortion, like Indiana. I have a hard time believing gen z is going to be as interested in moving to those states. Let’s see.
06 Aug, 12:57 PM UTC

@malcolmkenyatta
Indiana’s total abortion ban will happen in Pennsylvania if we don’t flip the state house @PAHDCC and elect @JoshShapiroPA as our Governor.
06 Aug, 02:51 PM UTC

@VP
I traveled to Indiana last month and met with more than 30 state legislators who were fighting against this. They stood up for women in the face of other so-called "leaders" who passed this law.
06 Aug, 04:19 PM UTC

Agolf Twitler Slayer
@bblock29
Eli Lilly, one of Indiana's largest employers, will now plan growth for the company in other states due to the new Indiana abortion ban law. That's a fuck you Indiana!
06 Aug, 02:41 PM UTC

Autumn 🎶
@SciRocker
Condolences to the women in Indiana who aren't going to make it now that their doctors will have to let them die because unlicensed, non-medically trained, politicians decided they are disposable.
06 Aug, 03:19 PM UTC

@nytimes
Some major companies in Indiana have criticized the state's new near-total abortion ban. Eli Lilly, a pharmaceutical company that is one of the state's biggest employers, said it will "be forced to plan for more employment growth outside our home state." https://t.co/0fxo9gI2jV
06 Aug, 05:40 PM UTC

LB 🌻☮️
@LincolnsBible
Rapists’ Bill of Rights in full effect in Indiana. Children and women now forced to carry and birth babies for the State. https://t.co/O5SINZt6oy
06 Aug, 03:55 AM UTC

@nytimes
Some of Indiana's largest employers, including Eli Lilly, criticized the state's near-total abortion ban one day after it was signed into law. Indiana is the first state to approve sweeping new restrictions since the Supreme Court overturned Roe v. Wade. https://t.co/FiionLL1G2 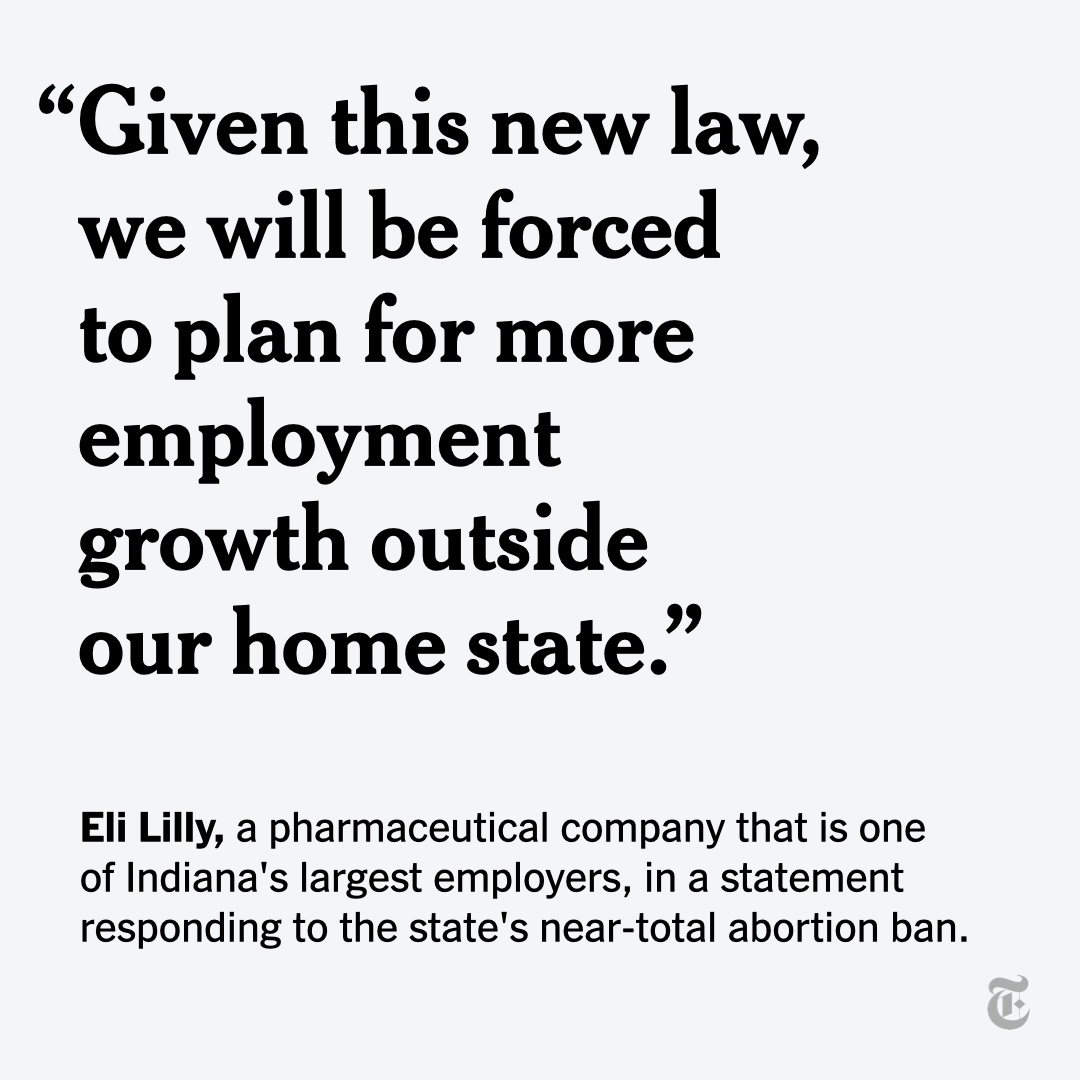 @LoriLightfoot
To the women of Indiana: Chicago’s doors are open. We unequivocally respect you and your health care decisions. Chicago will continue to remain a safe haven for those seeking reproductive care — you have my word.
06 Aug, 02:59 PM UTC

@JCTheResistance
In 95 days, women across America will extract our revenge on the MAGA radical extremists @GOP You can't bury your extremism. Get ready for Roevember. #VoteBlueToSaveAmerica Indiana Legislature Passes Near-Total Abortion Ban https://t.co/iiNKR3fLSc
06 Aug, 03:22 AM UTC

@byKateSmith
We're going to see a lot more states than just Indiana ban abortion in the coming weeks. If you're trying to follow it all, may I humbly recommend my new news series? Here's last week's episode, with a lot more detail on Indiana's new abortion ban. https://t.co/CUUVugtpWe
06 Aug, 03:06 PM UTC

@AP
The Biden administration and one of Indiana's largest employers have condemned the state's new ban on abortions, with the White House calling it another extreme attempt by Republicans to trample women's rights. https://t.co/EHXAXRevOt
06 Aug, 08:04 PM UTC

Rhonda Powers
@RhondaPowers
@adamwren In other words, the State of Indiana has created a hostile work environment.
06 Aug, 02:05 PM UTC 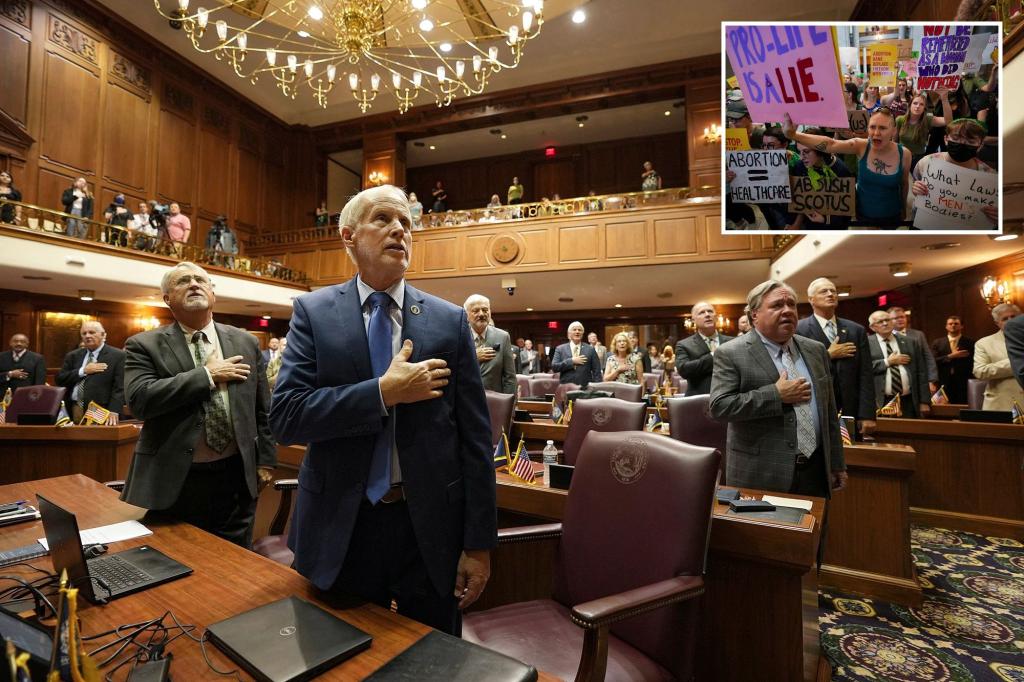 @ChrisSikich
Yesterday’s vote, which institutes a near-total abortion ban in Indiana, should be a signal to Americans across the country to make their voices heard." White House Press Secretary Karine Jean-Pierre. https://t.co/d1sm1cpIWM via @indystar
06 Aug, 04:55 PM UTC

ACLU of Indiana
@ACLUIndiana
Abortion is a right. From its very inception, the Indiana Constitution has contained the right to privacy — implicit in this right is the right for a woman and her doctor to make medical decisions regarding their reproductive health. #BansOffIndiana
06 Aug, 05:43 PM UTC

All-Options
@AllOptionsNatl
Unconscionable. The ban does not go into effect until 9/15 - abortion care is still legal and available in Indiana, and we're here to help Hoosiers today and every day after. https://t.co/cx0Qq38LhS
06 Aug, 04:11 AM UTC