@TheRickWilson
I’m starting to think this Jeff Clark fellow might not be the best lawyer in the justice department
23 Jun, 08:50 PM UTC

@glennkirschner2
Wow! It looks like Trump/Eastman installed an apparent co-conspirator, Ken Klukowski, in the DOJ just one month prior to 1/6 to work with Jeff Clark to corruptly overturn the election results. Breathtaking criminality.
23 Jun, 08:10 PM UTC

@JoyceWhiteVance
"Yesterday, more than a dozen DOJ law enforcement officials searched Jeff Clark’s house in a predawn raid, put him in the streets in his PJs, and took his electronic devices." https://t.co/LrU4Plh6YJ
23 Jun, 06:09 PM UTC

@January6thCmte
Former Trump White House lawyer Eric Herschmann on Jeff Clark’s plan to overturn the election: "Congratulations, you just admitted your first step or act you would take as Attorney General would be committing a felony..." 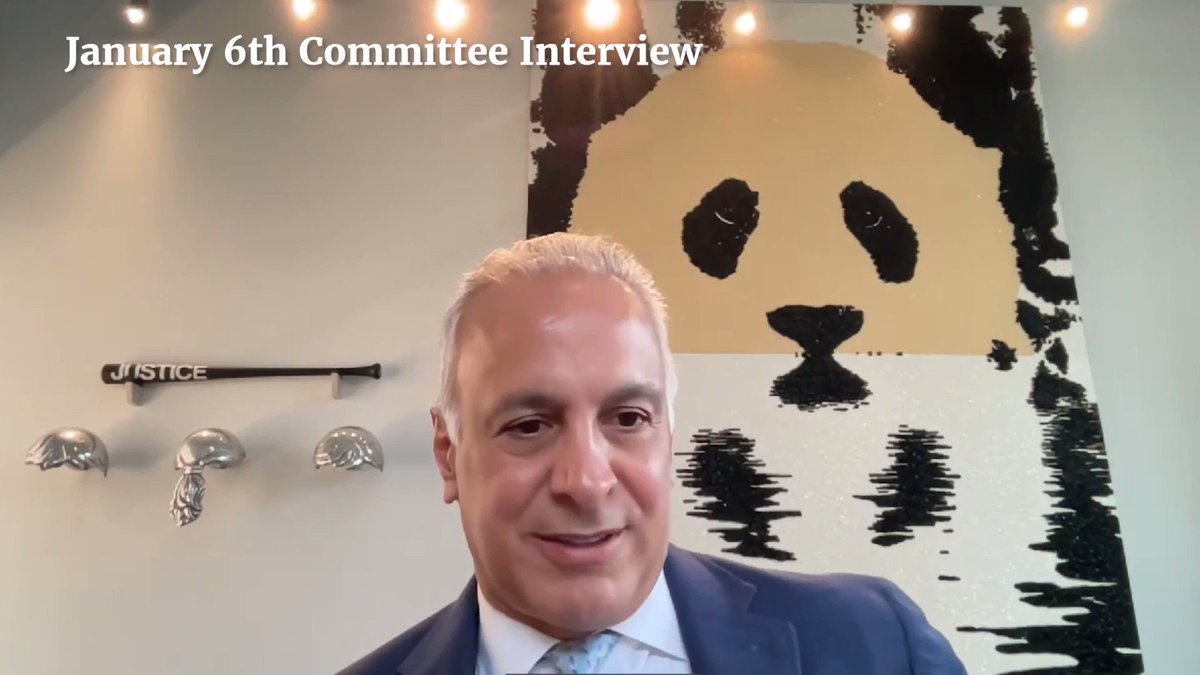 @January6thCmte
White House call logs obtained by the Select Committee show that by 4:19 pm on January 3, the White House had already begun referring to Jeff Clark as the Acting Attorney General. 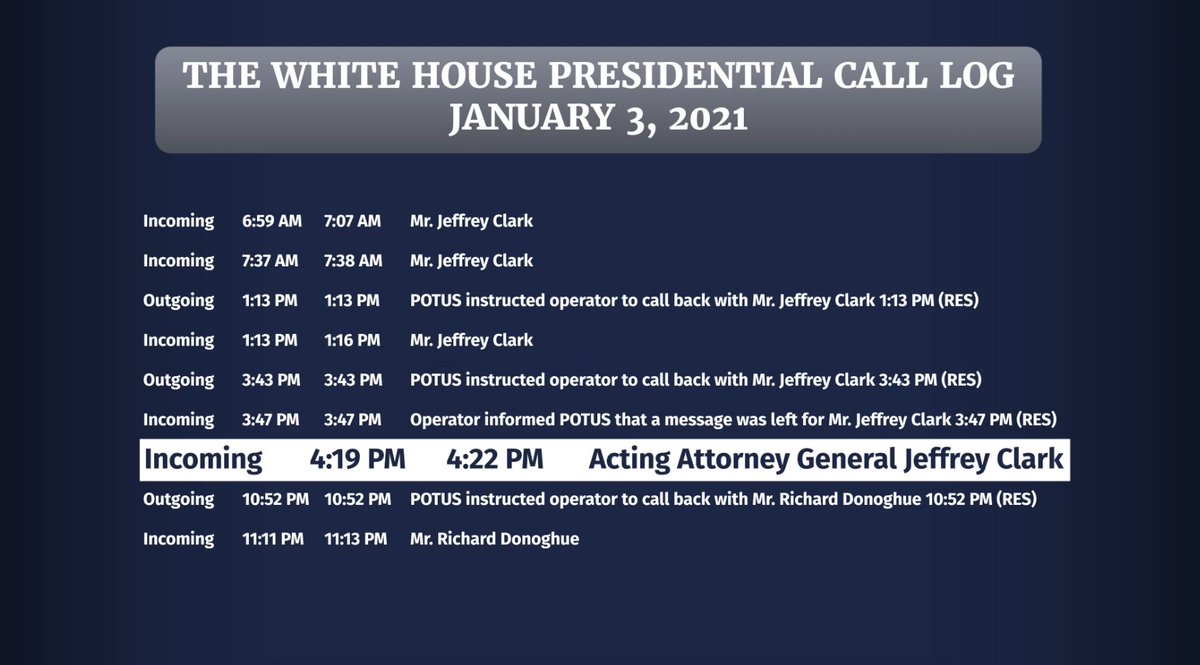 @johncardillo
DOJ raids former employee Jeff Clark’s home but never raided McCabe’s, Strozk’s, Page’s, Clinesmith’s, Sussmann’s, Elias’s, or Comey’s. Make no mistake, this isn’t about justice. This is a warning to everyone inside DOJ to never whistleblow or oppose the regime.
23 Jun, 07:13 PM UTC

@greg_price11
Jeff Clark committed no crime and was not at the Capitol on J6. For making libs angry by wanting to investigate voter fraud, he had his door kicked down by the feds in a pre-dawn raid. This evil regime is openly targeting dissidents as the people who cry about oUr dEmoCraCY cheer
23 Jun, 05:35 PM UTC

NoelCaslerComedy
@caslernoel
Reminder that after all this Jeff Clark went to work for Charles Koch at NCLA to oppose vax mandates & other covid restrictions. These bad actors & chaos agents are funded by big business. @GOP
23 Jun, 09:07 PM UTC

@RepKinzinger
As our witnesses shared today, Jeff Clark’s letter would have had grave constitutional, political & social ramifications for the country—using the DOJ to change the outcome of the 2020 election by ignoring millions of votes in states where Joe Biden won, starting with Georgia. 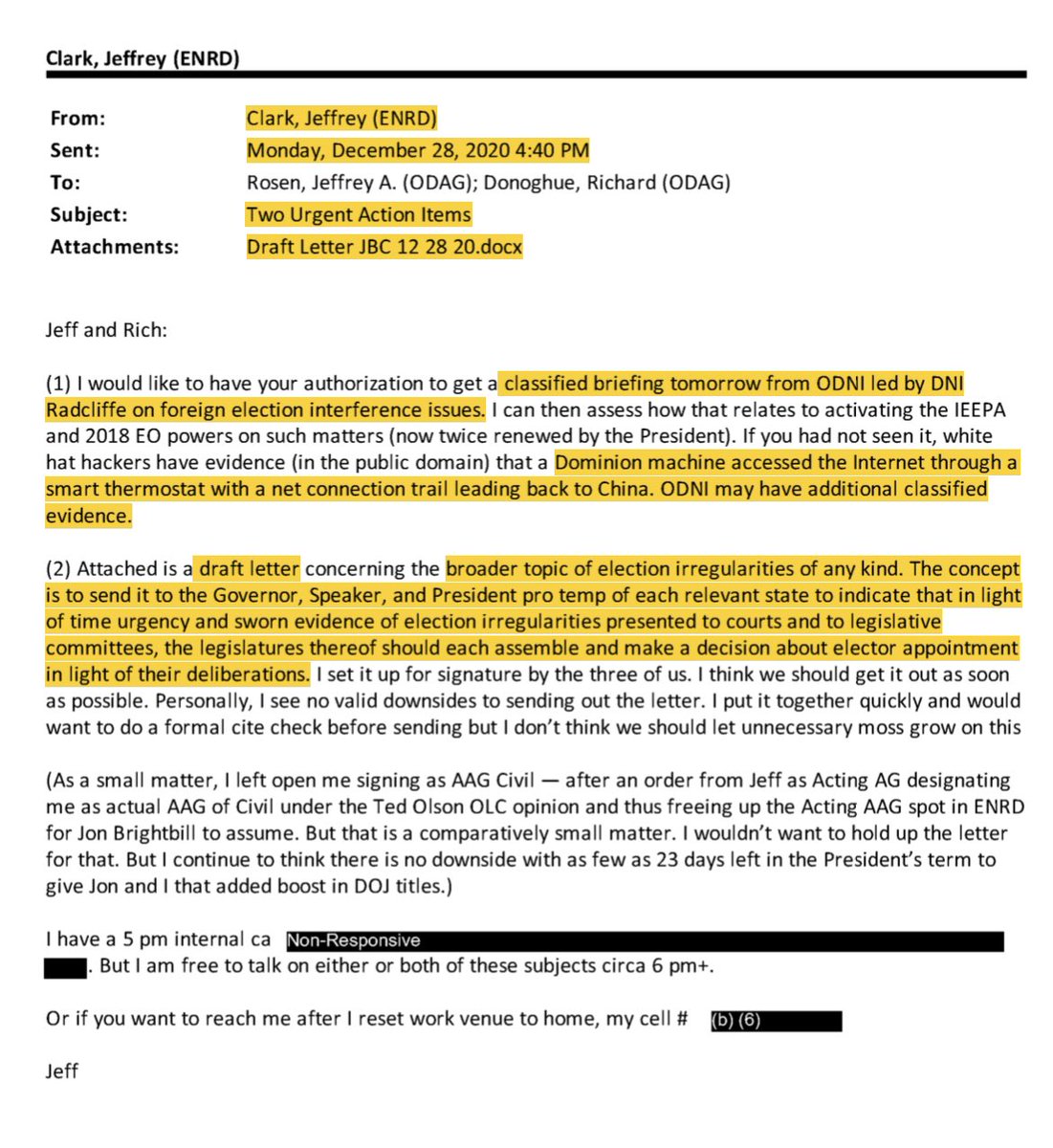 Duty To Warn 🔉
@duty2warn
Jeff Clark is having a bad day. The FBI raided his house. And his DOJ coup plot was exposed on TV in Congress.
23 Jun, 10:04 PM UTC

@Yamiche
Jeff Clark got blunt responses. Eric Herschmann: "The only thing you know about environmental & election challenges is that they both start with E." Rich Donoghue: "You're an environmental lawyer. How about you go back to your office & we'll call you when there's an oil spill."
23 Jun, 07:38 PM UTC

@atrupar
Former WH lawyer Eric Herschmann says, with some profanities mixed in, that he told Jeff Clark he would be committing felonies if he went through with his plan to overturn the election 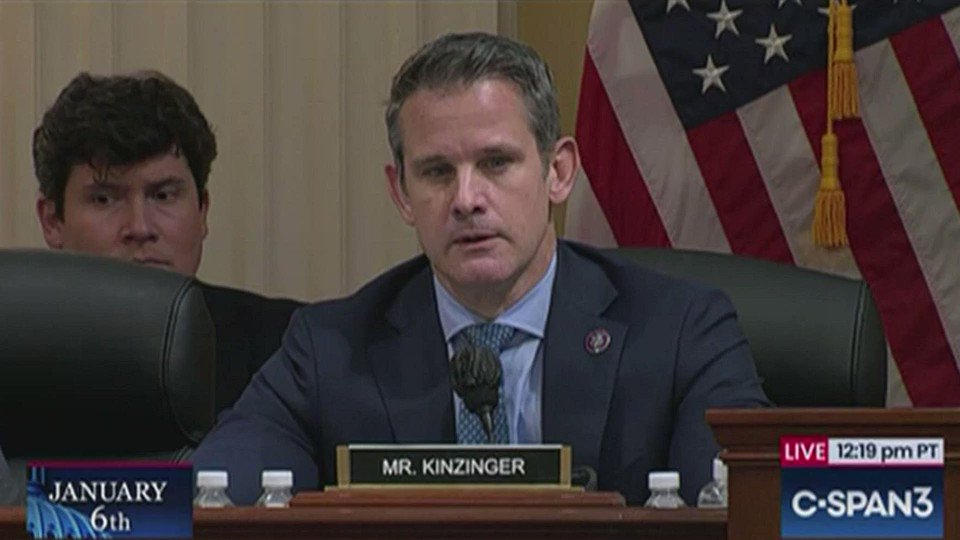 @AndrewFeinberg
ex-Deputy White House Counsel Eric Herschmann's thoughts on Jeff Clark: "good fucking a-hole, congratulations, you just admitted your first step or act you would take as attorney general would be committing a felony” "I thought his proposal was asinine..." 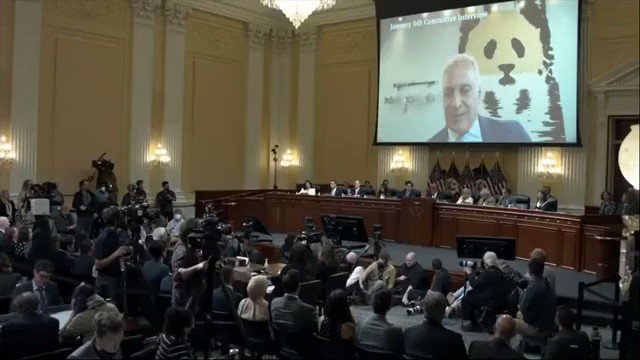 @ProjectLincoln
"People tell me I should just get rid of both of you...put Jeff Clark in, maybe finally something will get done." -- Former President Trump threatening to fire Acting AG Richard Donoghue and Acting AG Jeffrey Rosen #January6thHearings
23 Jun, 08:46 PM UTC

@briantylercohen
Kinzinger on Trump's effort to install Jeff Clark as the Acting AG: "It was a power play to win at all costs with no regard for the will of the American people."
23 Jun, 09:18 PM UTC

Will Chamberlain
@willchamberlain
Jeff Clark drafted a letter that would have had DOJ suggest to the Georgia legislature that it call a special session to hear evidence of voter fraud And this is a crime…why? How? On what planet?
23 Jun, 09:51 PM UTC

@JosephPatrice
Richard Donoghue keeps making this point that Jeff Clark was never a criminal lawyer and I can't help but remind everyone that Richard Nixon put a fucking municipal bond attorney in charge of DOJ
23 Jun, 09:01 PM UTC

Jonathan Turley
@JonathanTurley
The search of Jeff Clark's home is a significant escalation of the investigation by the Justice Department given the need for a warrant alleging a possible crime. https://t.co/2jdrWPqZIa
23 Jun, 06:17 PM UTC

@briantylercohen
Donoghue testifies that he told Trump that, if appointed Acting AG, Jeff Clark "would be leading a graveyard" because there would be so many DOJ resignations.
23 Jun, 09:04 PM UTC 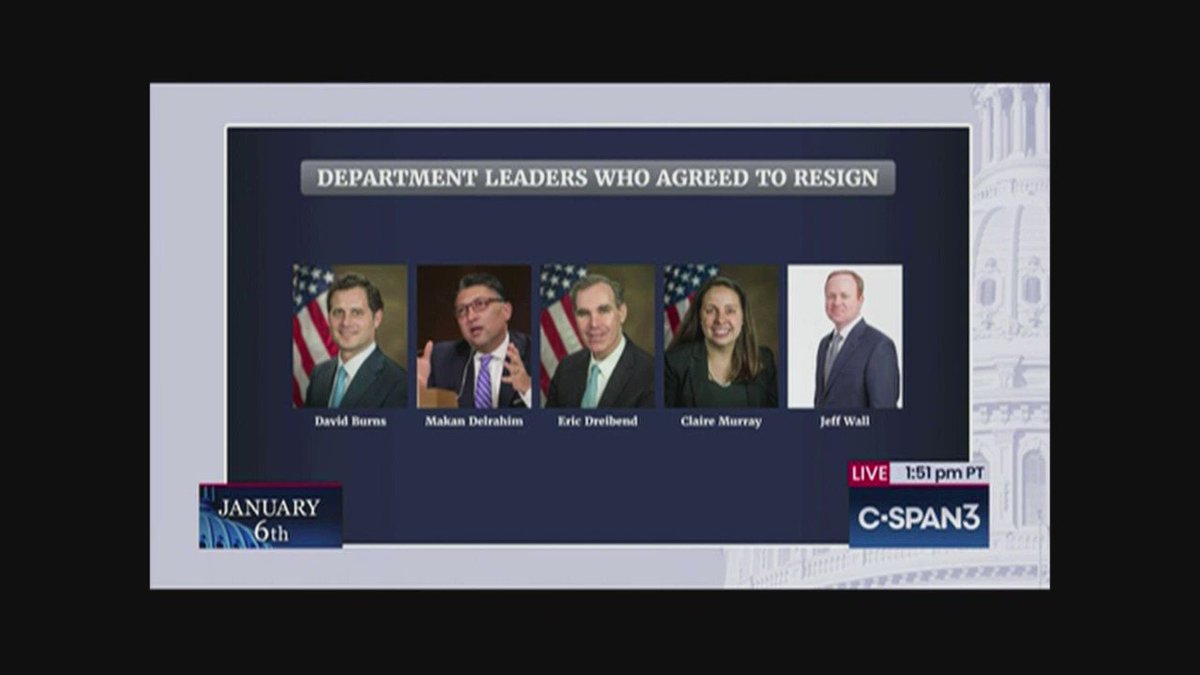 @mkraju
GOP Rep. Scott Perry texts Mark Meadows to get the WH to elevate Jeff Clark within DOJ to dispatch the FBI to pursue their fraud claims, even though top Justice officials said had no merit https://t.co/LCQ2glDD3Q
23 Jun, 08:01 PM UTC

@AccountableGOP
The committee plays Jeff Clark’s deposition in which he tries to claim executive privilege and plead the Fifth: 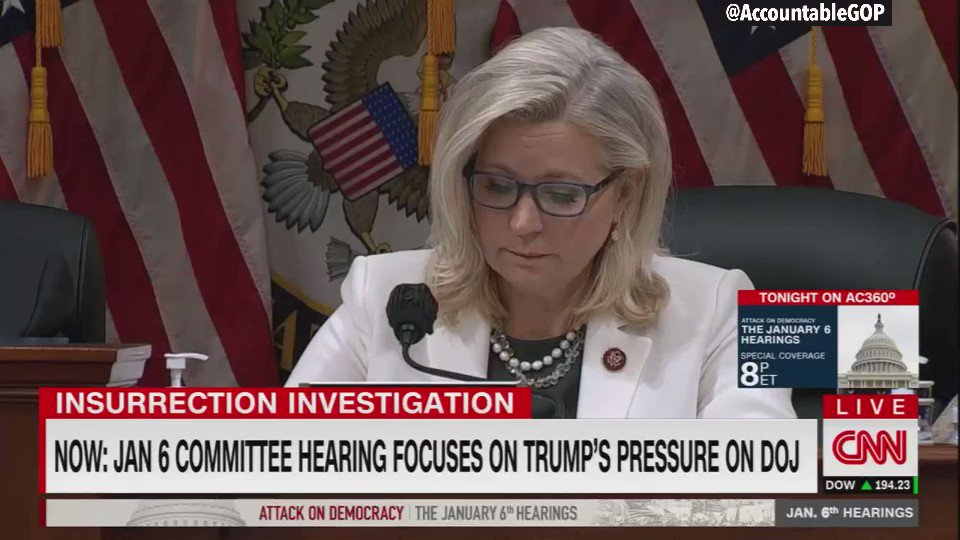