@kylegriffin1
John Boehner to CBS: Ted Cruz was "stirring up some of the crazies of my own caucus to cause all kinds of problems and it's probably why I zeroed in on him ... As I say in the book, 'There's nothing worse than a reckless jack-ass who thinks he's smarter than everybody else.'"
12 Apr, 02:30 PM UTC

@DavidCornDC
John Boehner is releasing a book tomorrow in which he slams Trump for inciting the 1/6 attack & assails the GOP for being a group of "whack jobs." He doesn't acknowledge he directly helped the GOP become a party of extremism & violence. Let's remind him. https://t.co/i1ktsSj5Fq
12 Apr, 02:17 PM UTC

@ABC
Former House Speaker John Boehner is keeping up his harsh criticism of Pres. Trump's role in the Jan. 6 riots, saying he "abused" the trust voters placed in him. https://t.co/W1XaK3Z42R
13 Apr, 01:23 AM UTC

@thedailybeast
Meghan McCain tried her best to tee up John Boehner for an attack on President Joe Biden on Monday, but the former Republican House Speaker refused to take the bait https://t.co/Ao4jBDhPJV
13 Apr, 03:30 AM UTC

George#VotesBlueAlways
@Numbers28
Watching the guy who used to pass around the tobacco blood money on the House floor as they lied that smoking tobacco didn't cause cancer, John Boehner, tells you everything that you want to know about fork tongued GOP crooks. He's now trying to recast himself as reasonable. #BS
13 Apr, 11:15 AM UTC

Jack©️
@Jackasaurus3
Just now - Stephen Colbert: Ted Cruz... John Boehner: Lucifer in the flesh. The most miserable son of a b*tch I ever had to deal with.
13 Apr, 05:25 AM UTC 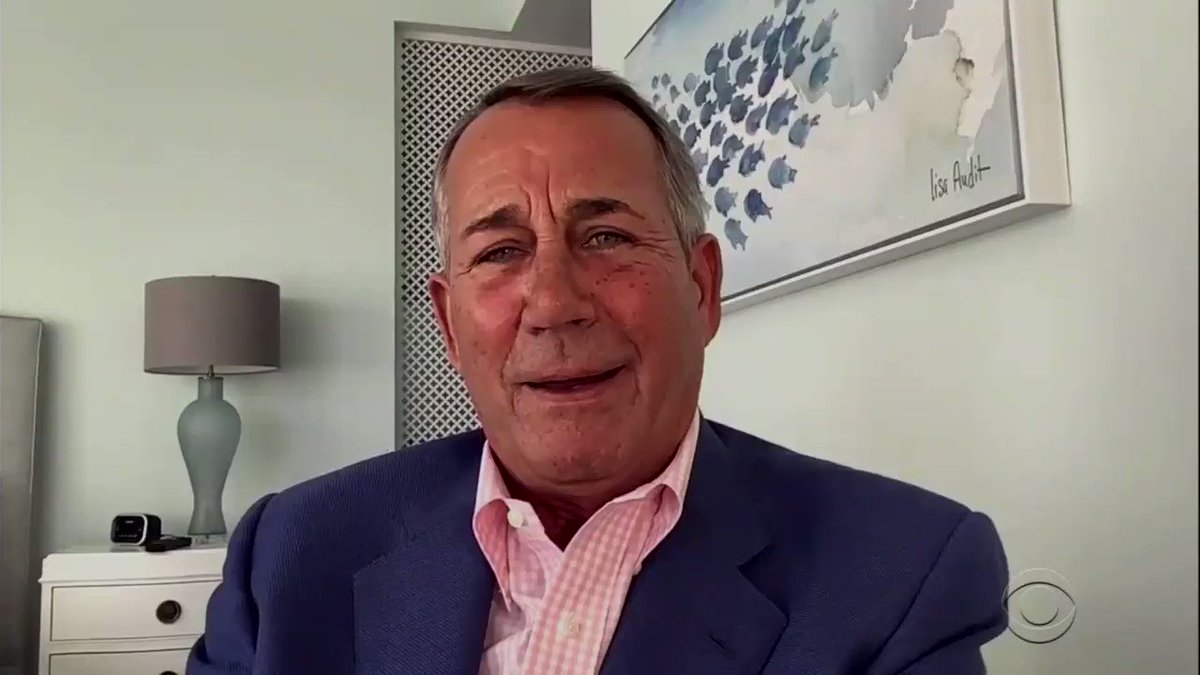 ♻️🇺🇸 Christopher Zullo
@ChrisJZullo
John Boehner reveals all about Republican Party. They are bunch of right wing “crazies” seeking money and power that thrive and survive with Fox News propaganda. Let’s not forget John was part of the problem. He led and obstructed every piece of Obama’s legislation after 2010
13 Apr, 12:05 PM UTC

Avatar 🏳️‍🌈🇵🇷
@lt4agreements
No John Boehner- the same kind of split is NOT going on in the Dem party! It’s always a nice surprise when Republicans speak out against Trumpism UNTIL they try to say the same about our party. Our party leaders are not Capitol rioters or murderous seditionists. #MorningJoe
13 Apr, 11:14 AM UTC

#TuckFrump
@realTuckFrumper
John Boehner Names ‘The Most Miserable Son Of Bitch I Ever Had To Deal With’ https://t.co/i0qOQLg95l
13 Apr, 04:37 AM UTC

Ed
@younakahara1970
John Boehner: Trump abused the loyalty, trust of the people who voted for him during election https://t.co/MM0EUJ73et
13 Apr, 12:35 PM UTC

Air Herbert
@iamnotherbert2
Fuck this toothless old dog, making his declarations from a safe space where he can no longer be touched by professional consequences. Boehner was the McConnell of the House. He is as responsible for this mess as all Republicans are. https://t.co/NVxUaGmbcW
13 Apr, 12:40 PM UTC