@RexHuppke
How do you sit on a story about the Joint Chiefs of Staff preparing for a coup by an outgoing president? Maybe I'm being an old-fashioned reporter, but that seems like news Americans should know about the moment it's confirmed.
15 Jul, 02:10 AM UTC

@Timodc
It’s amazing that the entire conservative ecosystem was saying any coup concern was derangement meanwhile the Chairman of the Joint Chiefs is comparing it to Reichstag. By far the worst miss of the decade and literally none of them have apologized or rethought their posture https://t.co/lYTGDApj7p
15 Jul, 01:36 AM UTC

George Conway
@gtconway3d
“Milley described ‘a stomach-churning’ feeling as he listened to Trump’s untrue complaints of election fraud, drawing a comparison to the 1933 attack on Germany’s parliament building that Hitler used as a pretext to establish a Nazi dictatorship.” https://t.co/sDkT0Xs2Qs
15 Jul, 01:26 AM UTC

@PalmerReport
Nobody had better ever give me any shit again for having compared Trump to Hitler. It turns out the Chairman of the Joint Chiefs said the same damn thing.
15 Jul, 06:45 AM UTC

@SteveSchmidtSES
This story is a must read and should make every patriotic American vomit. It is essential that General Milley be called before the House Armed Forces Committee and be put under oath. The American people have a right to this information. Terrifying https://t.co/iivbM9lITY
15 Jul, 11:37 AM UTC

@brhodes
The guy who wants to be Republican Speaker of the House - and almost the whole GOP caucus - backs the Big Lie on behalf of the guy that the Chairman of the Joint Chiefs of Staff compared to Hitler in the lengths he was willing to go to seize power. That’s where we’re at.
15 Jul, 02:25 AM UTC

@MollyJongFast
So it was almost a coup and we almost lost democracy and no one is going to hold Trump or the involved republicans accountable because why exactly? https://t.co/cGjzul6mLg
15 Jul, 11:31 AM UTC

@JoyceWhiteVance
Seems like there’s a straight line running thru the Joint Chiefs fear of a Trump coup after election & on into what happened in Jan. 6. https://t.co/HBzu0DzPyP
15 Jul, 02:01 AM UTC

Barbara Malmet
@B52Malmet
When the Chairman of the Joint Chiefs of Staff compares Trump to Hitler, that is nothing to gloss over.
15 Jul, 11:24 AM UTC

@Noahpinion
General Mark Milley, the Chairman of the Joint Chiefs, thought Trump might attempt a coup after the election. He and other military brass were prepared to stop it. He explicitly and repeatedly compared Trump to Hitler, and MAGA activists to brownshirts. https://t.co/n44m4zeR2H 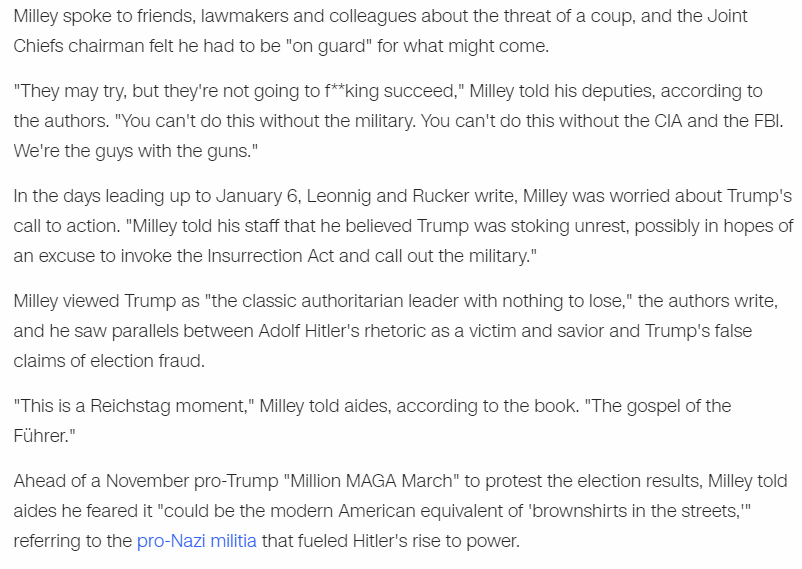 @AC360
CNN's @jamiegangel discusses troubling new revelations about former Pres. Trump's final days in office. "To hear general Milley say this … is stunning," she says of Chairman of the Joint Chiefs Gen. Milley's reported pledge at the time to thwart any at any illegal coup attempt. 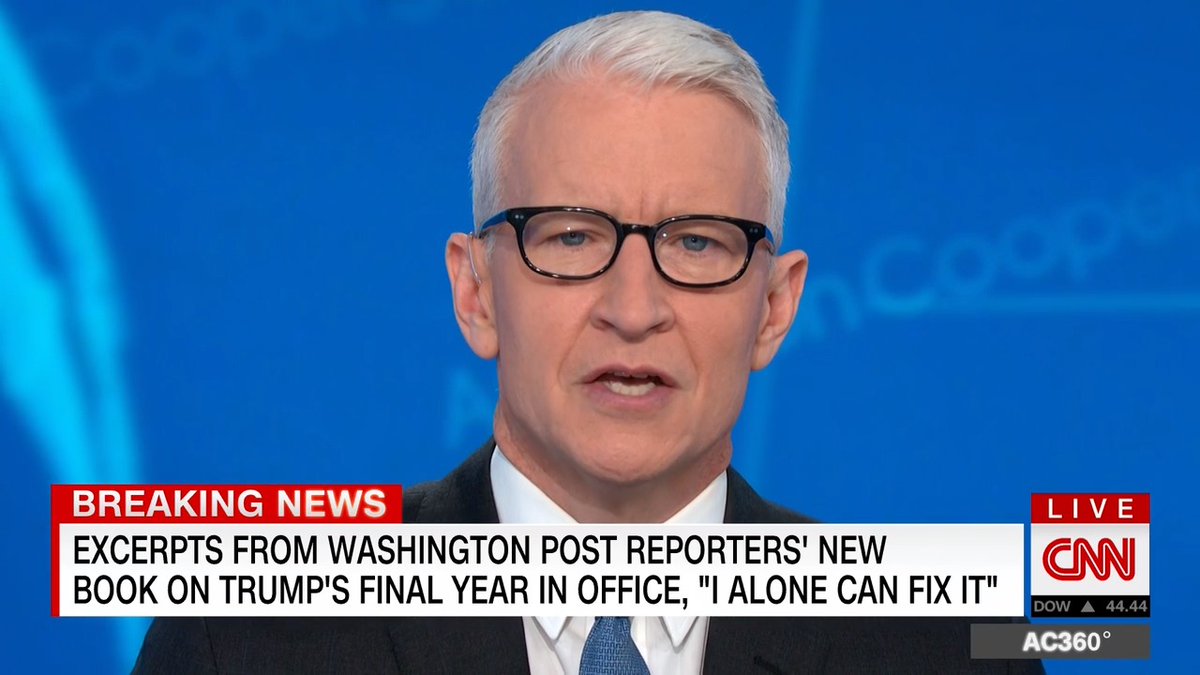 @SteveSchmidtSES
The Speaker of the House @SpeakerPelosi called the Chairman of the Joint Chiefs of Staff after Trump was defeated and poisoning our democracy with lies. She was concerned about Trump launching a Nuclear attack. Gen. Milley, according to the @washingtonpost, responded by saying (1
15 Jul, 12:08 PM UTC

@EmeraldRobinson
Gen. Milley is so full of it that he could fertilize outer space all by himself. https://t.co/O3OaDahn7f
15 Jul, 04:20 AM UTC

@Bencjacobs
I got an early copy of @CarolLeonnig and @PhilipRucker's book for @intelligencer and, in it, they have Mark Milley, the chairman of Joint Chiefs, likening Donald Trump to Hitler and worrying that Trump was preaching "the gospel of the Fuhrer" https://t.co/kDfr9Qt9pr
14 Jul, 07:21 PM UTC

George Conway
@gtconway3d
.@jamiegangel with the details …. Joint Chiefs were afraid tfg would try a coup. Milley saw tfg as Hitlerian and feared a “Reichstag moment” …
15 Jul, 12:03 AM UTC

@JuliaDavisNews
Milley described “a stomach-churning” feeling as he listened to Trump’s untrue complaints of election fraud. “This is a Reichstag moment,” Milley told aides, according to the book. “The gospel of the Führer.” https://t.co/J9Y9kjJZLd
15 Jul, 01:24 AM UTC

@kylegriffin1
General Mark Milley, the chairman of the Joint Chiefs of Staff, likened Trump's effort to hold onto power after the 2020 election to Adolf Hitler, saying he was preaching 'the gospel of the Führer' with his lies about the election being stolen. https://t.co/44ao5clDv4
15 Jul, 12:00 PM UTC

@jeremynewberger
Trump, the guy who tried to stage an authoritarian coup to stay in power, and is compared to Hitler buy our Joint Chiefs of Staff, has the full and unwavering support of the current @GOPLeader Kevin McCarthy. That should scare you quite a bit.
15 Jul, 11:08 AM UTC

@hugolowell
New via CNN: The top US military officer, Chair of the Joint Chiefs Mark Milley, was so shaken that Trump might attempt a coup that Milley and others planned ways to stop Trump, per new Rucker-Leonnig book.
15 Jul, 02:55 AM UTC

Duty To Warn 🔉
@duty2warn
Gen. Milley had a “stomach churning” realization that Trump might attempt a coup, and he personally could be the nation’s last line of defense. Chilling article, worth reading from, “I Alone Can Fix It.” https://t.co/gDztzqhlaN
15 Jul, 02:42 AM UTC

@jeremynewberger
Joint Chiefs of Staff believed Trump was trying to stage a coup. Congress felt no need to investigate the insurgency he incited on January 6th to stop certification of the election. He is running again. Time for the arrest and trial of Donald J. Trump and his accomplices.
15 Jul, 11:39 AM UTC