Kate Shaw
@kateashaw1
This is heartbreaking. Judge Katzmann was a brilliant jurist & scholar, & an absolutely lovely person. A huge loss for the federal courts and for the larger legal community https://t.co/4JswkRkF5m
10 Jun, 03:22 AM UTC

Sasha Samberg-Champion
@ssamcham
I had the great honor to clerk for Judge Katzmann. He will always be a role model for how to be a great, accomplished lawyer and also a wonderful--and even humble--human being, in a profession that too often puts those concepts at odds. https://t.co/KB4DWHDRe1
10 Jun, 04:17 AM UTC

@BenWeiserNYT
2/ Chief Judge Debra A. Livingston said Judge Katzmann had a vision: "that the judiciary might lend a steadying hand to our democracy...His quiet confidence, determination, exceptional leadership, and strong sense of justice inspired us all. We will miss him profoundly.”
10 Jun, 02:59 AM UTC

Ryan Park
@RyanYPark
Clerking for Judge Katzmann was one of the best years of my life. He was such a kind, supportive, and fundamentally decent human being—who just happened to be a brilliant scholar, institution-builder, and judge. He was one of the greats. I will miss him dearly. 1/ https://t.co/XnZjGh2SzX
10 Jun, 04:30 AM UTC

@LeahLitman
May his memory be a blessing. Judge Katzmann managed to be not only super smart, but also a great judge and a kind person. A huge loss. https://t.co/PYPV2sGnS5
10 Jun, 10:36 AM UTC

@deepakguptalaw
This is very sad news. Judge Katzmann was one of the leading lights of the federal judiciary--an exemplary jurist, scholar, and mentor and, among many other things, a champion for the view that the machinery of justice owed immigrants adequate representation and a fair hearing. https://t.co/JsTZee0EsQ
10 Jun, 03:45 AM UTC

@joshchafetz
This is a huge, huge loss for both the federal bench and the legal academy. Judge Katzmann was a giant of both. He was also one of the kindest, most thoughtful people I know. https://t.co/fXhlWIVP1W
10 Jun, 12:57 PM UTC

Rachel Barkow
@RachelBarkow
The world lost a great one. There aren’t many people who achieve what Judge Katzmann did and remain as kind and unassuming. I will miss him. https://t.co/5mWy3kEIvx
10 Jun, 10:29 AM UTC

Heidi Kitrosser
@heidikitrosser
Very sad to hear of Judge Katzmann's passing. Quick anecdote: Way back in the day (1991), when I was just a little college sophomore at UCLA, I spent a quarter interning in D.C. Katzmann was at Brookings at the time, and kindly agreed to let me interview him 1/2
10 Jun, 02:45 AM UTC

Chris Shenton
@ChrisShenton1
I was fortunate enough to take Judge Katzmann’s seminar on Administrative Process. He was a deeply kind man, went out of his way to give thoughtful career advice and encouragement, and who centered real people and their lives in his approach to the law. https://t.co/eWeKySvFTx
10 Jun, 03:14 AM UTC

Jonah Perlin
@JonahPerlin
And if you do not know about Judge Katzmann read this announcement from the Second Circuit 👆. Then read it again. It is but one tribute of I am sure many to follow about a man who pursued justice and righteousness at every turn.
10 Jun, 03:01 AM UTC

Lindsay Nash
@lindsaycnash
Such a loss for the world today. Clerking for Judge Katzmann was one of the best, most profound experiences of my professional and personal life. Getting to continue working with him on one of his passions—working to resolve the crisis in immigrant representation—was another. 1/5 https://t.co/mMmi6PHl7I
10 Jun, 01:48 PM UTC

Aaron Reichlin-Melnick
@ReichlinMelnick
It is fair to say that thanks to Judge Katzmann’s work and influence, thousands of immigrants have been able to find lawyers and successfully fight deportation. So many lives have been changed for the better because of his advocacy. Read about his life here. https://t.co/Ma06Mipk9G
10 Jun, 03:40 AM UTC

Michael A Livermore
@m_livermore
The depth and universality of respect for Judge Katzmann is hard to overstate. If we can come to know virtue by seeing it in action, he was a profound model. I'm grateful for each of our small interactions over the years. https://t.co/GQLtPj3yjN
10 Jun, 01:54 PM UTC

Ryan Park
@RyanYPark
Judge Katzmann was at once the kindest, most empathetic man I’ve encountered in public life—and the most effective. He cared about people and treated everyone with respect. And he accomplished his goals, which invariably involved helping other people. /2 https://t.co/Q3MluLrZ7u
10 Jun, 04:30 AM UTC

Heather Axford
@heatheraxford13
RIP Judge Katzmann. He was a great judge and a truly good man. His conviction that the immigrants whose cases came before him deserved so much better than they were getting became @IJCorps to which @CALAenlalucha now owes more than half of our staff. Thank you Judge Katzmann.
10 Jun, 01:04 PM UTC

Richard C. Failla LGBTQ Commission of NY Courts
@NYCourtsLGBTQ
Chief Judge Katzmann opened up the Second Circuit courthouse for a Pride Month event for the first time ever in 2019 to commemorate the 25th anniversary of Judge Deborah Batts’s confirmation to the federal bench. It is profoundly sad that both of them have now died. https://t.co/VomzeUf7Kb https://t.co/nmBMYT6N2W
10 Jun, 12:14 PM UTC

Kannon Shanmugam
@KannonShanmugam
This story tells you everything you need to know about Judge Katzmann. He was admired and respected by folks from across the political spectrum. A salutary lesson in these polarized times. https://t.co/vJz84cnFdk
10 Jun, 12:40 PM UTC

Sara Kropf
@SaraKropf
Judge Katzmann was my mentor at Georgetown & officiated my wedding in July 2001. He was a kind & thoughtful person. His passing is a loss to the legal community and to those of us who knew him on a personal level. I will have more to say later, but we have lost a quiet giant. https://t.co/WMpmR60VxN
10 Jun, 02:00 PM UTC

Jonah Perlin
@JonahPerlin
Judge Katzmann had so many wonderful qualities. As @joshchafetz captures, one was that he cared SO deeply about every person he met. He had an uncanny ability to remember people but also to find ways to make them feel heard, raise them up, and make them better. https://t.co/SgGsVTjbYS
10 Jun, 01:44 PM UTC

@charlie_savage
Nine years ago, Judge Katzmann recommended me and Mike Davidson, a retired Senate Intelligence Committee general counsel, to co-teach a Georgetown University seminar on national security and the Constitution. I thanked him in the acknowledgements of "Power Wars." 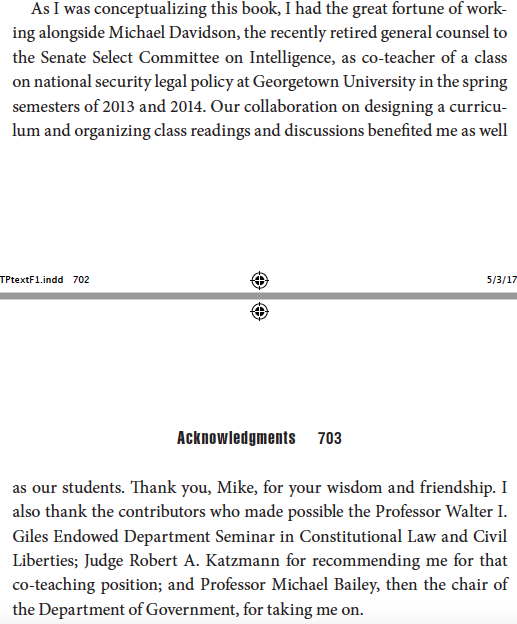 Ajay K. Mehrotra
@AjayKMehrotra
A tremendous loss for the legal profession and American society. We had the honor of hosting Judge Katzmann for an @ABFFellows event last year to discuss his life as a scholar and jurist, and his passion for civics education. He will be deeply missed by us all. RIP. https://t.co/eL95h86Gaq
10 Jun, 11:59 AM UTC

Rachel Bayefsky
@RachelBayefsky
Judge Katzmann is a person who, through determination and depth of vision, left the world in a much better place than he found it. His loss, and his legacy, are immeasurable. https://t.co/oafiZGXuAo
10 Jun, 02:50 PM UTC

Matthew B. Lawrence
@mjblawrence
Judge Katzmann showed me how powerful kindness can be in the law. He knew how to listen. A wonderful role model and a huge loss. This thread is well put by Michael, who captures my feelings exactly (and those of many of us NYU students who got to take his class). https://t.co/076eMTgJoT
10 Jun, 01:27 PM UTC

Anna O. Law
@UnlawfulEntries
I am saddened by Judge Katzmann's death. In addition to being a federal judge, he had a Ph.D. in political science and was an expert in judicial/congressional relations. He was also a champion of immigrants' rights as described in the paragraph below. https://t.co/tvPqVahcqJ https://t.co/zix7hDJO6c
10 Jun, 01:08 PM UTC

Fix the Court
@FixTheCourt
A lot of beautiful remembrances being written about Judge Katzmann, z"l. Here's CA2's note https://t.co/rVJ2uDT2Qe & we want to highlight the judge's commitment to “increas[ing] public understanding of the role and operations of the courts.” A true loss.
10 Jun, 02:29 PM UTC