Kagan is trending on Twitter. Popular tweets on Kagan.

@RepKatiePorter
(Justice Kagan isn't the only one with an affinity for a well-placed spoiler alert!)
29 Jun, 04:07 PM UTC 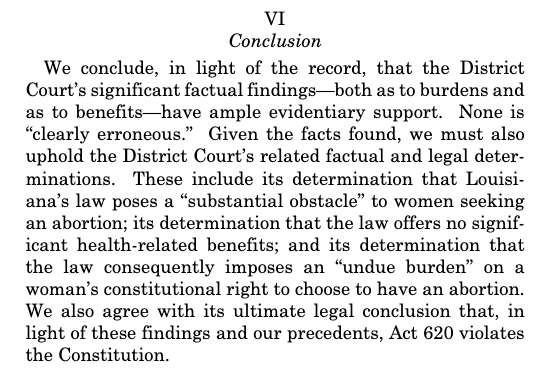 @IsaacDovere
Heritage Foundation fully turns on Roberts: "This is the latest in a series of judicial power grabs from the Chief Justice and the liberal wing of the court ... Justice Roberts, a so-called 'conservative,' is clearly no longer running things — it’s now the Kagan Court."
29 Jun, 02:40 PM UTC

@deepakguptalaw
Read Justice Kagan cut straight to the heart of what's really going on in today's decision on the constitutionality of the Consumer Financial Protection Bureau. 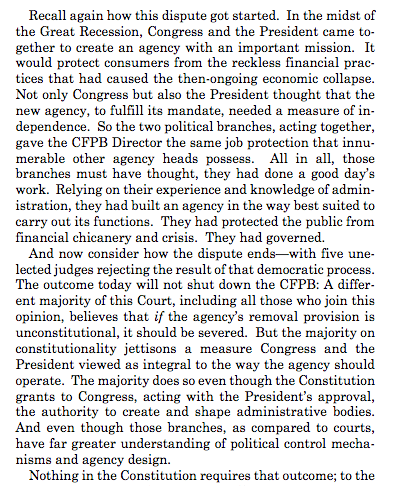 @mjs_DC
Is Kagan the first justice to use "spoiler alert" and/or the first to cite Schoolhouse Rock? https://t.co/O5kr6rKWxE 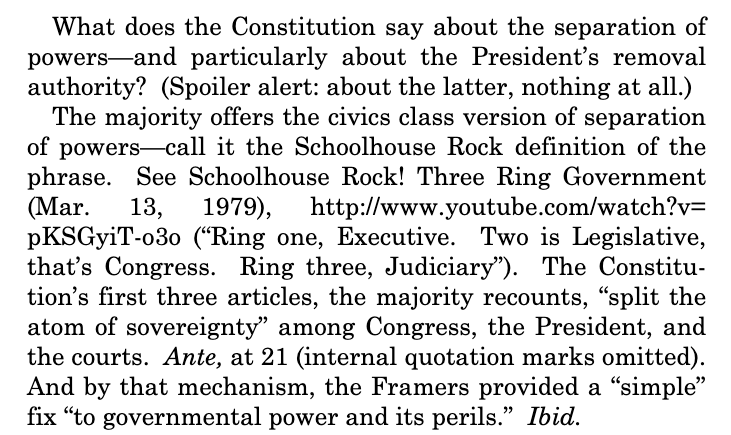 @studentactivism
Kagan and Sotomayor, writing in dissent, are both bracingly explicit in describing the rot at the core of our government. They're angry and afraid, and willing to say so. (More clearly and compellingly, in my experience, than Dem congressional leadership.) https://t.co/7rowwFPTiJ
29 Jun, 03:21 PM UTC

graham steele
@steelewheelz
In her dissent, Justice Kagan puts her finger on what this case - and the whole effort to undermine CFPB since it was first proposed - is really about. Making it harder for agencies to check the outsized (economic & political) power of the financial industry. https://t.co/AHl1BZIlZo
29 Jun, 03:58 PM UTC

@mcpli
Justice Kagan’s dissent in the CFPB case accuses the majority of employing a “Schoolhouse Rock definition” of separation of powers.

Ross Guberman
@legalwritingpro
Has Kagan one-upped her cite to Dr. Seuss in Yates with her cite to Schoolhouse Rock in CFPB today? She even offers a YouTube cite (I'm sad to say that I'm old enough to remembering watching this as a kid in 1979). https://t.co/qOpzNi361a #appellatetwitter #TVLearning https://t.co/FAHvNRgp70
29 Jun, 03:12 PM UTC

Sarah Unsicker
@SarahUnsicker
The opinion of the Court was delivered by Breyer, Ginsburg, Sotomayor and Kagan, with Roberts filing a concurring opinion. https://t.co/fRgGEtBFWc
29 Jun, 02:24 PM UTC

Amanda Hollis-Brusky
@HollisBrusky
Kagan uses the phrase "spoiler alert" in dissent in #CFPB case AND cites School House Rock. Now *that* is how you make a separation of powers case fun and interesting for non-#SCOTUS nerds. #Seilalaw
29 Jun, 03:22 PM UTC

Vox "Abolish Qualified Immunity" Prudentia
@VoxPrudentia
@WhenISayJ It needs to be said that Justice Kagan is probably the only one up there right now who's actually committed to stare decisis for its own sake. For better or worse.
29 Jun, 04:24 PM UTC