@LukeNozicka
BREAKING: A judge has granted Jackson County prosecutors’ motion to exonerate Kevin Strickland, 62, in a 1978 triple murder and ordered his immediate release, confirming that Strickland suffered one of the longest wrongful convictions in U.S. history. https://t.co/XZAjfrh3eS
23 Nov, 05:48 PM UTC

@joncoopertweets
BREAKING: A judge has just RELEASED Kevin Strickland, a Black man who spent 42 YEARS in prison for a crime he didn’t commit. How would you suggest compensating Strickland for such a HORRENDOUS wrongful conviction?
23 Nov, 09:02 PM UTC

Duty To Warn 🔉
@duty2warn
It's been a whopper of a day. So much so, that we realized just now we didn't even tweet about a story that is both awesome and bittersweet. Kevin Strickland is finally free, after serving 43 years pursuant to a wrongfully conviction in Missouri. 43 years.
24 Nov, 02:09 AM UTC

@washingtonpost
Kevin Strickland, held 43 years for murder, is exonerated. His is one of the longest-standing wrongful convictions in U.S. history. https://t.co/g06zkEB3i4
23 Nov, 06:26 PM UTC

@aurabogado
A 62-year-old who spent more than 40 years behind bars for a crime he didn't commit was released today. Under Missouri law, Kevin Strickland is not entitled to housing, counseling, or one penny of compensation. https://t.co/EQMQQNgpg3
23 Nov, 09:11 PM UTC 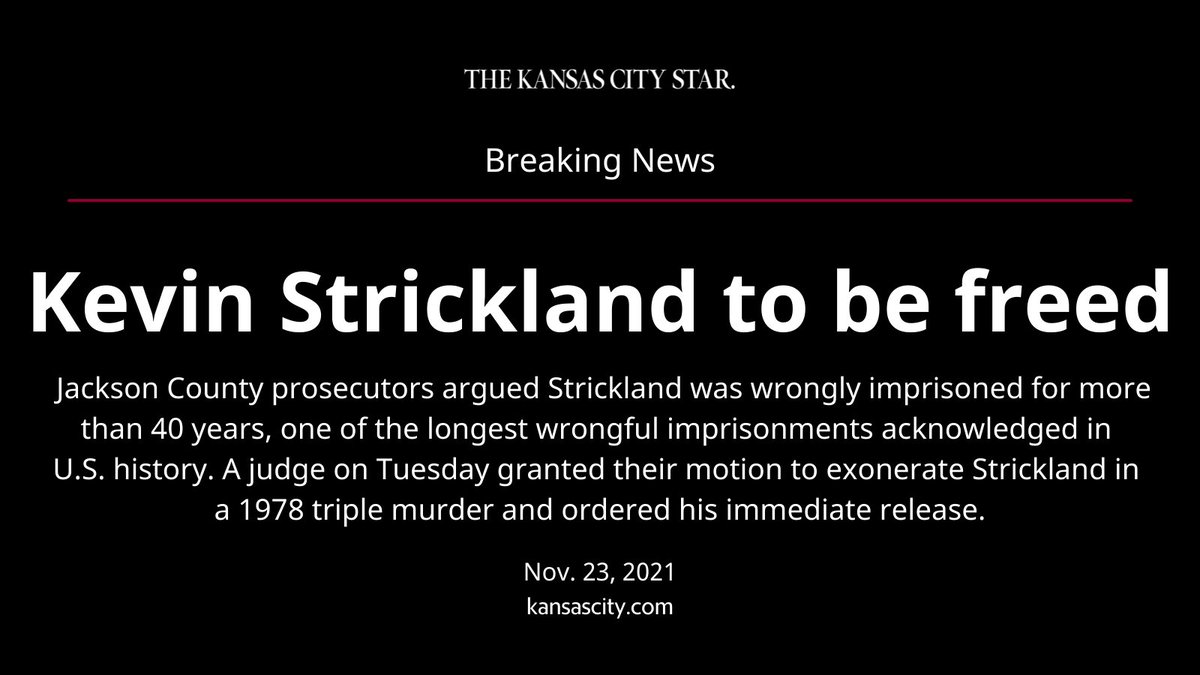 @nytimes
After spending more than 43 years in prison, Kevin Strickland, 62, was exonerated for a 1978 triple murder in Kansas City after a judge ruled that there was no physical evidence tying him to the crimes. https://t.co/JhlqzSEWEQ
24 Nov, 04:00 AM UTC

@KCStar
Missouri has one of America’s most narrow compensation laws. If Kevin Strickland qualified, which he does not, he would have to live to be 104 to receive all of the money owed to him. https://t.co/BxMzrPmoEt
23 Nov, 06:02 PM UTC

Rebecca Kavanagh
@DrRJKavanagh
BREAKING: After spending 43 years in prison for a triple homicide he didn't commit, after local prosecutors exonerated him, and despite the Missouri government doing every possible thing to keep him behind bars, Kevin Strickland is finally free tonight! https://t.co/CbrSbKGzWc
24 Nov, 02:14 AM UTC

@thedailybeast
62-year-old Kevin Strickland has been exonerated after 42 years in jail – putting an end to one of the longest wrongful convictions in the history of the United States. https://t.co/lH8sZUfmhe
24 Nov, 02:40 AM UTC

@RadioDana
WHAT A GLORIOUS DAY!! After 43 years in prison for a crime he DID NOT commit, Kevin Strickland will spend Thanksgiving WITH HIS FAMILY. He leaves lockup without a DIME. HAPPY DAY TO EVERYONE EXCEPT MISSOURI AG ERIC SCHMITT YOU ARE A HORRIBLE HUMAN BEING AND I HOPE YOU GET FLEAS.
23 Nov, 06:37 PM UTC

@tcita
Thank you all for your support! All funds go directly to Mr. Strickland, who the state of Missouri won't provide a dime to for the 43 years they stole... https://t.co/O0HMK3iiYN
23 Nov, 08:51 PM UTC

@tcita
Today, Kevin Strickland is finally home, 43 years after being ripped away from his life and family. It took not just a village, but a movement--all of you-- to bring him home.
24 Nov, 04:21 AM UTC

Elad Gross 🇺🇸
@BigElad
Missouri won’t give a penny to Kevin Strickland for the 42 years he wrongfully spent in prison, but we’ll give plenty of taxpayer money to Attorney General @Eric_Schmitt to cover his exorbitant and depraved efforts to keep him there.
24 Nov, 03:59 AM UTC

Patt with two T's
@PatsHoppedUp
While the news about Kevin Strickland being released is fantastic, remember that he won't receive a dime from the state of MO because they have an insanely strict compensation law for wrongful convictions. @The_MIP started a fundraiser for him here: https://t.co/9racmDBiDF
23 Nov, 06:13 PM UTC

GET A GRIP
@docrussjackson
A US black man has been released from prison after more than four decades after a judge ruled that he was wrongfully convicted of three killings in 1979. Imagine if he'd received the death penalty, as so many US citizens do... https://t.co/4VftGjKosP
24 Nov, 01:13 PM UTC

@brikeilarcnn
Kevin Strickland spent more than four decades in prison for a triple homicide he did not commit. He has finally been exonerated and is now a free man. Strickland joins @NewDay and says he is in "disbelief" 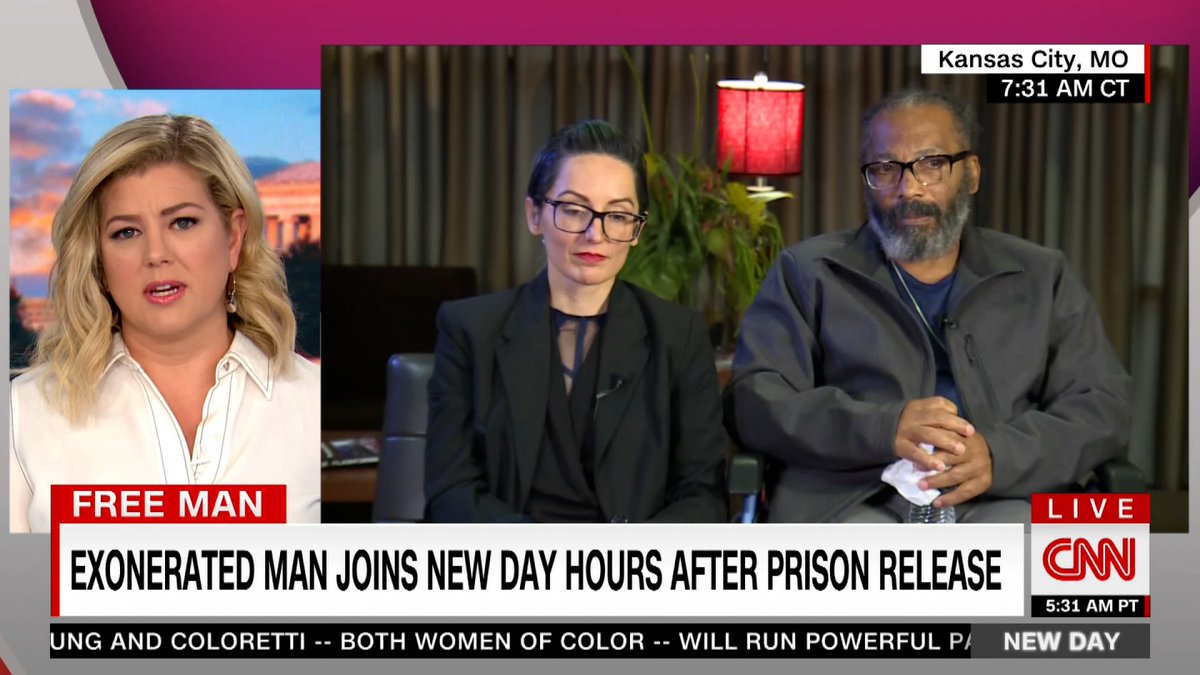 @LukeNozicka
A fundraiser set up by @The_MIP for Kevin Strickland had raised about $37,000 as of this morning. Since his release, it has grown to $207K That’s about $4,900 for each year he wrongly spent behind bars. https://t.co/fdET6MnXdL MO will not compensate him. https://t.co/jojJq3Axnx
24 Nov, 04:09 AM UTC

🅲🅰🆃 🏴‍☠️~ Be A True Patriot, Get Vaccinated!
@RememberMeYeah
Kevin Strickland is exonerated after 43 years in one of the longest WRONGFUL-conviction cases in U.S. history. Mr. Strickland may soon be free but his life was stolen from him. He’s 62 & has been behind bars for 43 of those years. #JusticeSystemReform https://t.co/K1D6c6onPs
23 Nov, 11:25 PM UTC

@Newsweek
Strickland, 62, won't qualify for compensation from the state of Missouri after a judge ruled he was wrongfully conviction for a triple murder in 1979. https://t.co/TWu6yuhFyF
24 Nov, 11:27 AM UTC

@MarshallProj
Even though the case against Kevin Strickland for 1978 murders fell apart almost from the start, he will get no compensation from the state that convicted him because of a restrictive law that limits payments to the wrongfully convicted. @KCStar reports https://t.co/4y2UG1dcke
24 Nov, 01:49 PM UTC

Henry M. Rosenberg
@DoctorHenryCT
While Kevin Strickland was released from prison after serving 42 years for a crime he didn't commit, Kyle Rittenhouse who shot 3 people, killing 2 was taking a victory tour and visited Trump at Mar-a-Lago. Good thing there's no systemic racism in this country.
24 Nov, 01:58 PM UTC

@NewDay
62-year-old Kevin Strickland, who spent 43 years in prison for a triple murder he says he didn't commit, was finally set free. "It was a restless night last night. And I'm thinking ... are they waiting for me outside to take me back?" he says. https://t.co/tnb8dicTGN