Kip Oebanda
@kipoebanda
Shame on you, Koko Pimentel! You put doctors and the sick in danger. A PUI not revealing his status was the reason a doctor died a few days ago. How can our senators be so callous, irresponsbible and self-centered? Disgusting! We will never forget this.
25 Mar, 06:41 AM UTC

EMILIO
@13thFool
By escaping his quarantine, Senator Koko Pimentel exposed 3 doctors, 3 nurses and possibly the whole hospital unit. In turn, they could have unwittingly infected their patients and family members and the chain of transmission could have went on. Yes, stupidity kills.
25 Mar, 06:39 AM UTC

@gideonlasco
Koko Pimentel's actions have disgraced the Senate, violated the government's own directives, and endangered other people's lives. Such careless and arrogant behavior is more dangerous than any virus. I join calls for him to apologize and immediately resign.
25 Mar, 07:50 AM UTC

@giasison
Sharing the statement from our medical director on the incident involving Senator Koko Pimentel. We denounce what he did. 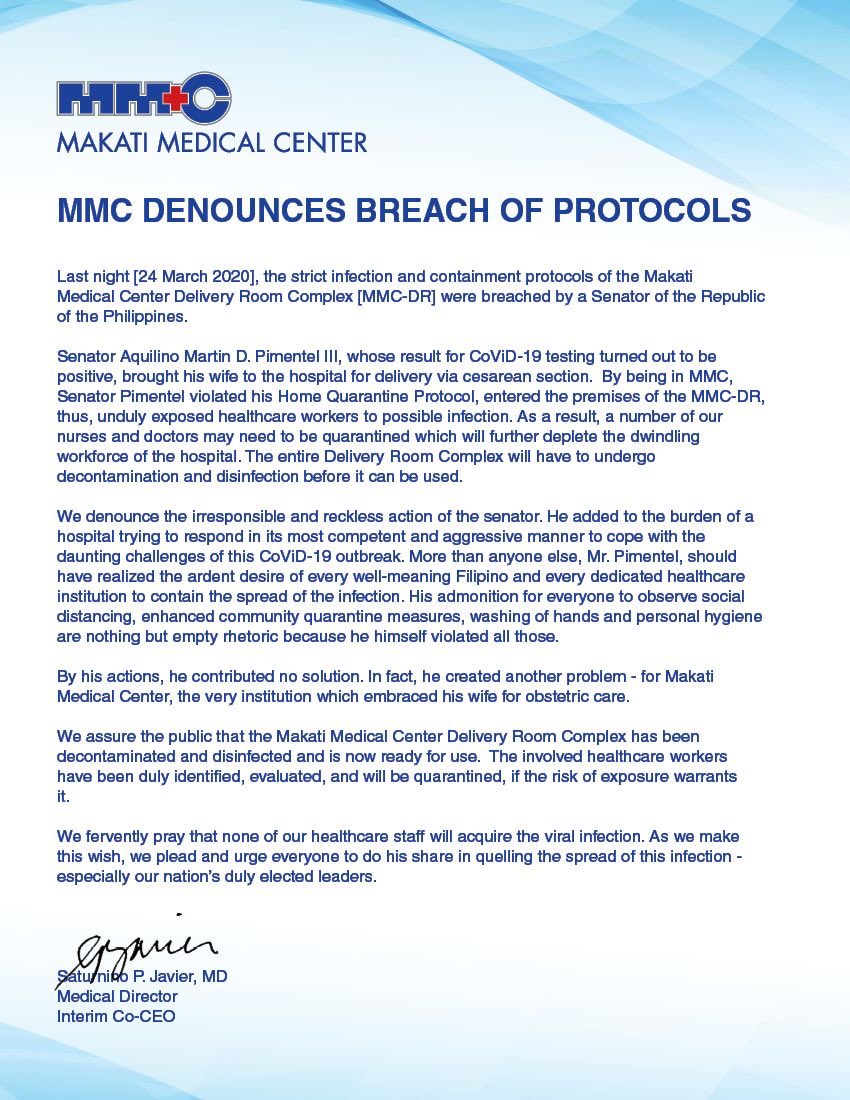 RJ Naguit 🌹
@raymondnaguit
Never saw a strong statement like this coming from a hospital EVER. Ang lala ni Koko Pimentel. 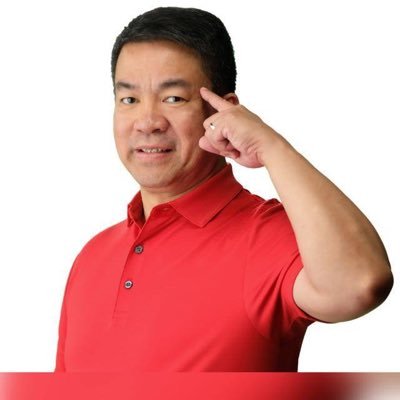 𝘳𝘰𝘯𝘢𝘯
@ronanabalos
Jessica Soho roasted Koko Pimentel while being so calm, fab and professional. I love the energy!! 😭✨ 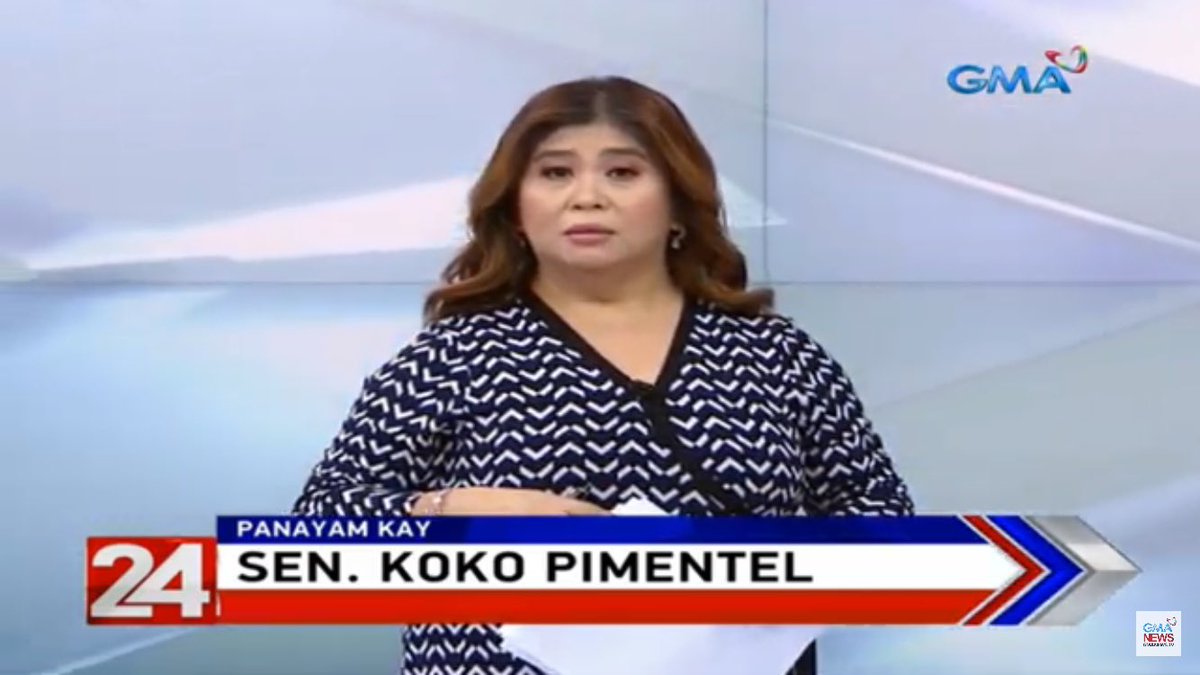 Mai Dionisio
@mymai_d
So PUI Senator Koko Pimentel accompanied his wife to the Delivery Room last night because she was scheduled to give birth this morning. RITM called him that he tested positive for Covid-19. Sorry, he went to the delivery room KNOWING HE COULD HAVE COVID-19?
25 Mar, 05:00 AM UTC 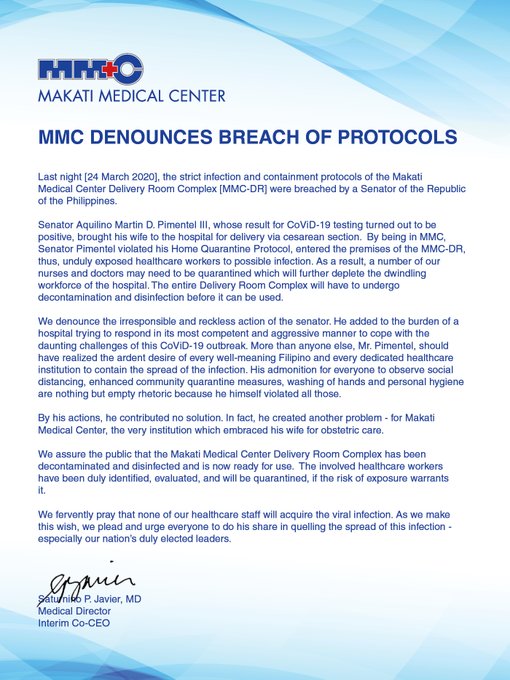 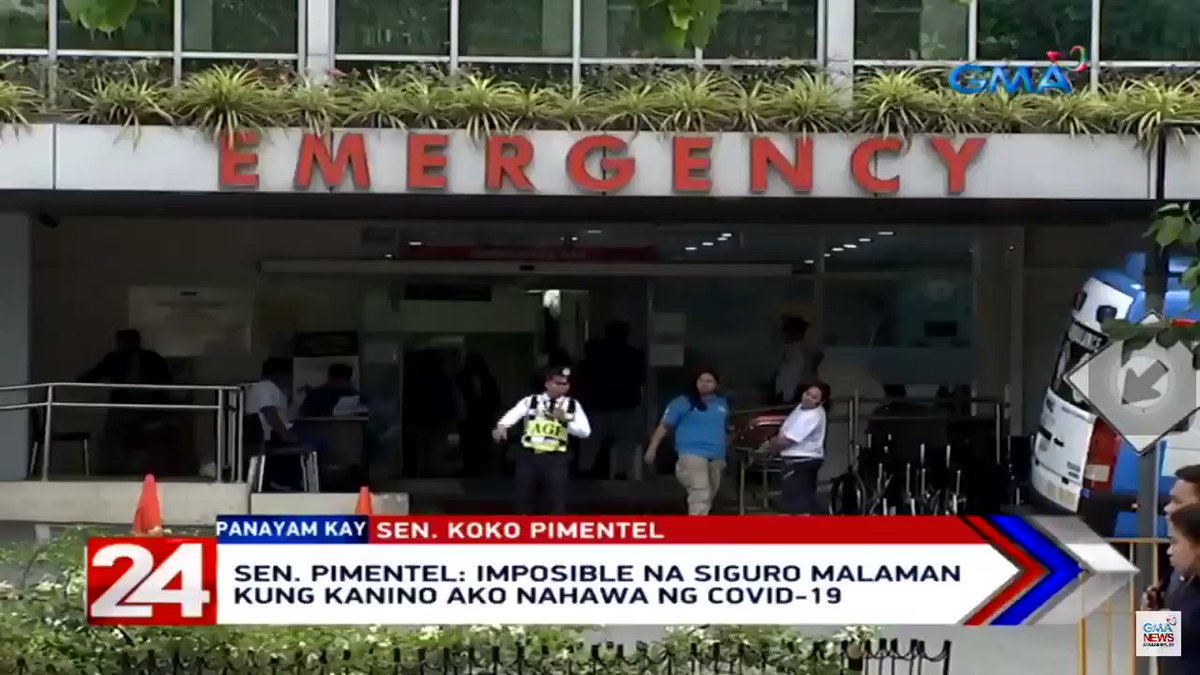 🥀 your tita kate
@yourtitakate
So, to recap: A sitting senator of the Philippines (Koko Pimentel) who TESTED POSITIVE FOR COVID-19 escaped his quarantine to accompany his wife to the delivery room of Makati Medical Center - thereby exposing THE ENTIRE OB-GYNE DEPARTMENT to the virus? ARREST THIS BITCH.
25 Mar, 07:33 AM UTC 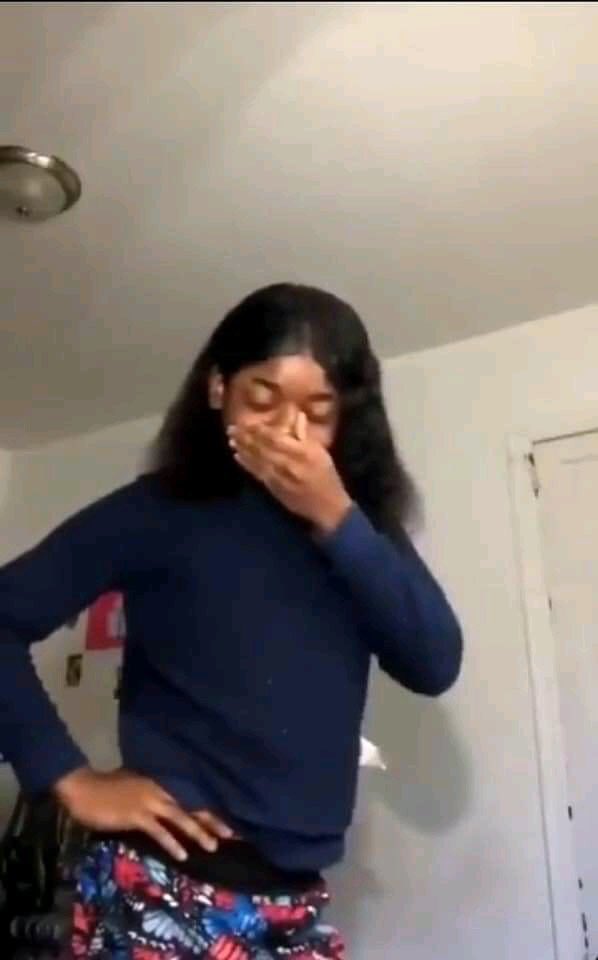 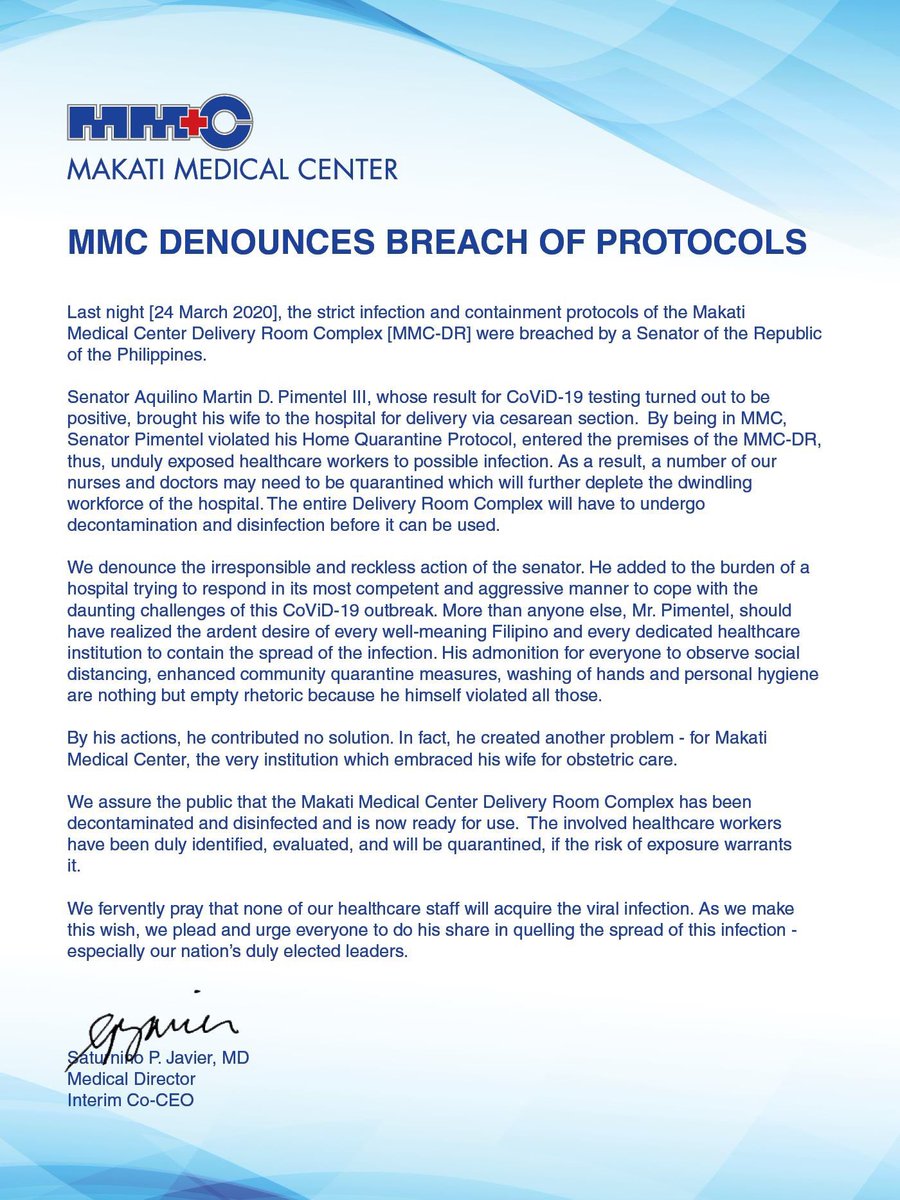 𝙆𝙚𝙡
@kelanocyte
Now let's see what th action would be re: Koko Pimentel. Let's see how serious the government is in protecting the Filipino people. You're so fast at reprimanding ordinary citizens for going outside, now show us your authority on influential people violating the EO.
25 Mar, 09:06 AM UTC

Agatha Uvero
@jeanagatha_
Please, don't call Koko Pimentel stupid. He is not. He is an educated man, a bar top notcher, a senator who is well informed about the guidelines of quarantine and his symptoms. He willingly and knowingly put everyone at risk. He is careless at wala siyang pakialam sa iba.
25 Mar, 11:52 AM UTC

badge #MassTestingNowPH
@glucobadge
Jessica Soho bringing up the issue of VIP testing on live TV while interviewing Koko Pimentel. As usual, di ginamit kokote sa pagsagot. Obviously, the senator cannot get away with his irresponsible actions.
25 Mar, 10:38 AM UTC 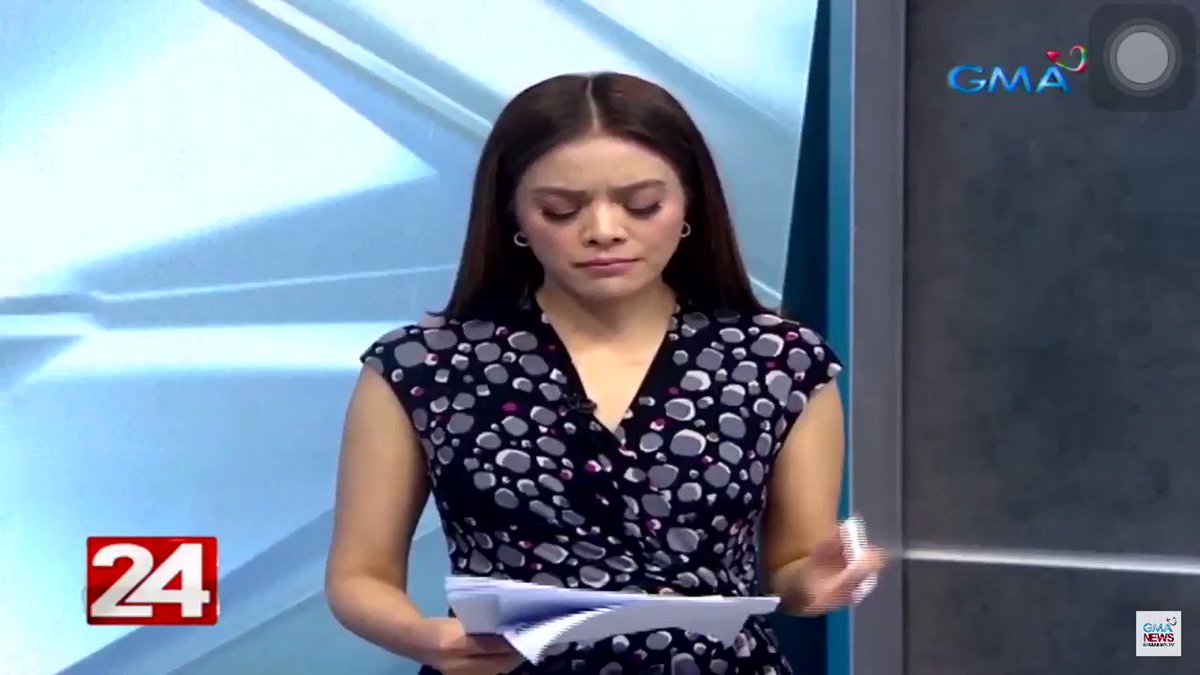 M
@michellemmanese
The audacity of Koko Pimentel to say na "i-disinfect na lang yan..."????? ANG TANGA ANG KUPAL????? Ilang doctors, nurses, personnel, and other patients ang na-encounter mo????? Disinfect rin sila????? Now they have to be in quarantine, too, because you didn't. Stupid.
25 Mar, 11:01 AM UTC

stephanie.🍩
@pieishere
I'll never forget the face of this selfish evil. Our medical community is still mourning the death of a doctor bcos a patient lied to them! But so what, said one Koko Pimentel who broke quarantine protocol & demanded VIP treatment which exposed more frontliners to the virus.🤬

jet
@jetastonvi
Funny how koko pimentel dodged jessica soho’s question of why senators were tested first despite initially having no symptoms before the frontliners some of which were ACTUALLY showing symptoms of the virus,,, heh
25 Mar, 10:38 AM UTC

Nat Bohulano 🌈🦄
@nathalybohulano
Koko Pimentel is not tanga, bobo, or stupid, that implies lack of awareness. Call him for what he is-- an entitled, self-absorbed, irresponsible politician who deliberately ignored quarantine protocol because he thinks that his wants are more important than the lives of others.
25 Mar, 11:34 AM UTC

@ramboreports
Koko Pimentel pushes the narrative that he didn't know he had coronavirus when he came to Makati Medical Center. What a maneuver. Senator, you knew that you possibly had the virus, and you knew you should have stayed in quarantine. Yet you still broke the rules.
25 Mar, 10:53 AM UTC