@MollyJongFast
Larry kudlow is wrong about everything all the time https://t.co/MiGi0hABQ8
23 Mar, 07:18 PM UTC

@McFaul
I like Larry Kudlow personally. But as he tells us today that we need to go back to work, remember he is not an economist (BA in history;not a PhD in economics) & said this last month: "US has contained the coronavirus and the economy is holding up nicely" https://t.co/xHUu2OMIw1
23 Mar, 06:47 PM UTC

@kylegriffin1
The U.S. Chamber of Commerce and the heads of major corporations have lobbied the administration against using the Defense Production Act. Trump and Larry Kudlow, as well as Jared Kushner, were persuaded by those arguments, administration officials said. https://t.co/3YbYFnvcB8
23 Mar, 09:20 PM UTC

@maxwelltani
Larry Kudlow on Fox News: "The president is right. The cure can't be worse than the disease. And we're going to have to make some difficult tradeoffs."
23 Mar, 04:01 PM UTC

@chuckwoolery
Larry Kudlow, economic advisor to the President. " I just can't believe that the Democrats won't help in this time of crisis." Dear Larry you have spent enough time Washington to know how the Democrat game goes. But I, and Americans agree with you. We don't want to believe it.
23 Mar, 04:09 PM UTC

@mattyglesias
Maybe it’s just me, but personally I intend to go back to restaurants when public health experts say it’s safe not when Larry Kudlow decides it would be more convenient.
23 Mar, 11:45 PM UTC

@JamilSmith
There is no cure for the coronavirus, so that alone makes this a stupid thing to say. But presuming he means ending physical distancing to help the U.S. economy, it isn’t difficult to surmise that the workers most in jeopardy of infection won’t be guys like Trump or Larry Kudlow. https://t.co/DEQ9xcdCPm
23 Mar, 05:07 PM UTC

@juliaioffe
President Trump, Larry Kudlow, and people on this website are discussing loosening the mitigation efforts to save the economy. Here is what that spike would look like if we did. Infections and deaths would surge—right before the election. 1/ 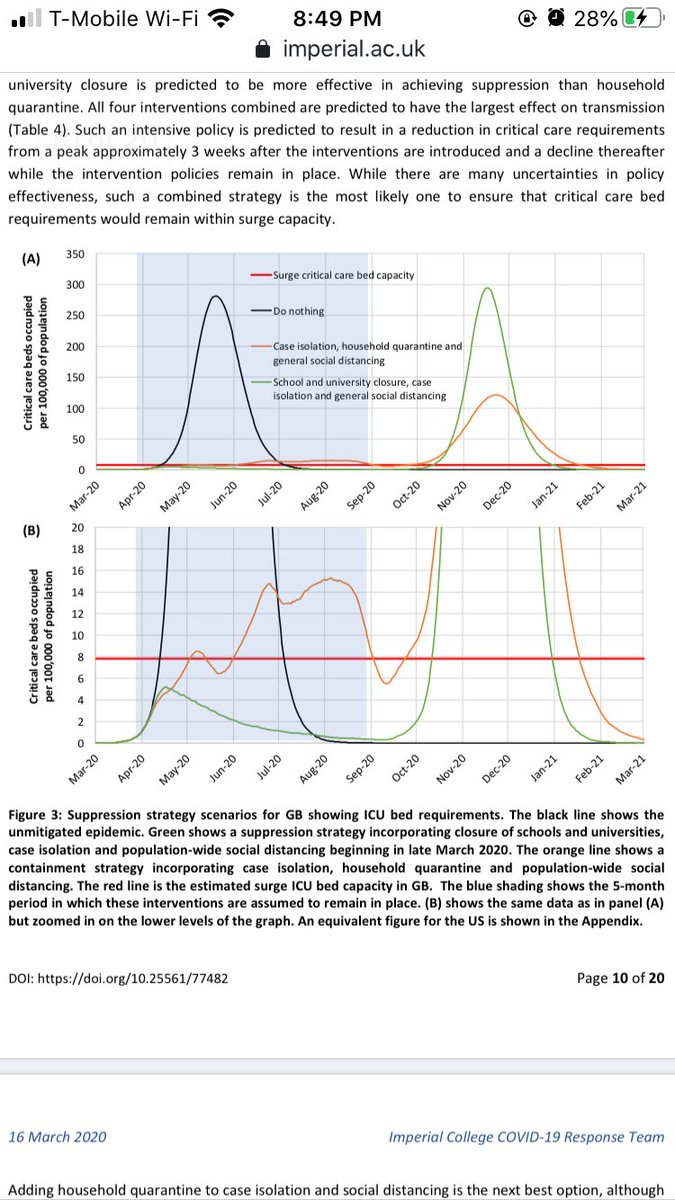 @kendallybrown
I have no immune system. I'd be one of those trade-offs Larry Kudlow is referring to. These are the real death panels. Please don't let them kill me. https://t.co/8PSf6ZQGuX
23 Mar, 08:17 PM UTC

@justinbaragona
Here's video of Larry Kudlow telling Fox News that "the president is right" about possibly ending social distancing after 15 days: "The cure can’t be worse than the disease and we will have to make some difficult tradeoffs... I spoke to the president about this very subject" 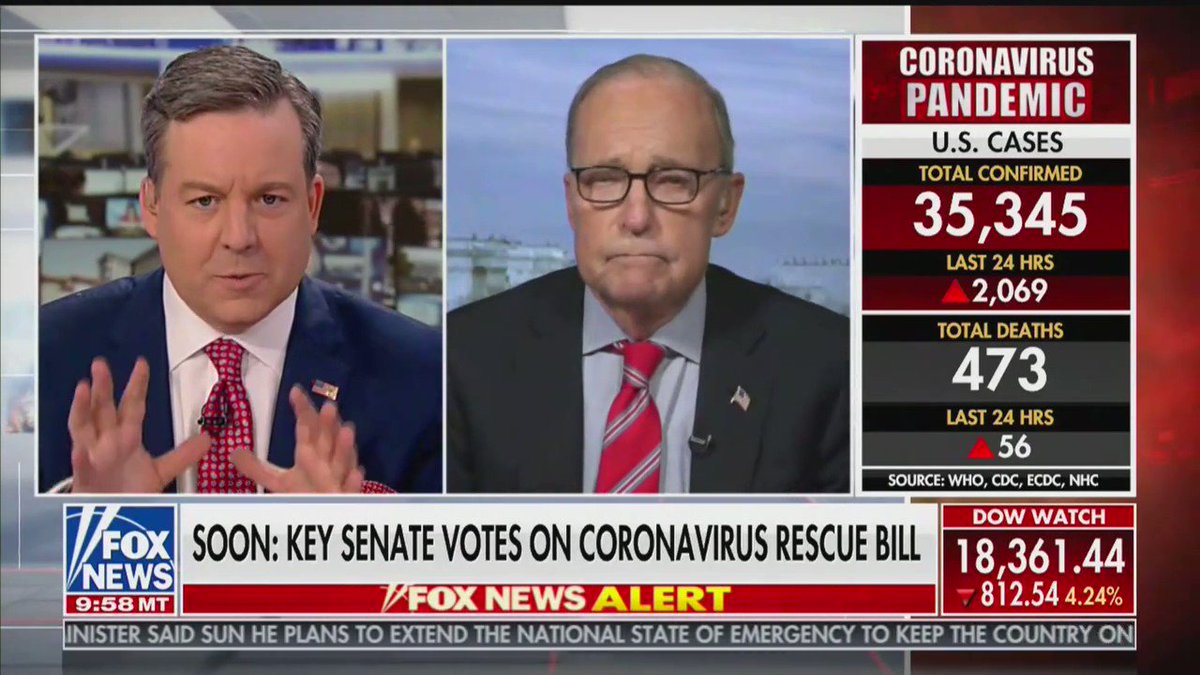 Ricky Davila
@TheRickyDavila
MAGA Lunatic Larry Kudlow: "The cure can't be worse than the disease. And we're going to have to make some difficult tradeoffs." He’s talking about trading human lives for good looking market numbers. These people are despicable.
23 Mar, 09:40 PM UTC

@ASlavitt
Several reporters called me very concerned that the Larry Kudlow argument is having an influence on Trump. Namely that more people will die from a bad economy than from the pandemic. I do understand the struggle. And the argument. But....5/
23 Mar, 11:16 PM UTC

Battle Beagle
@HarmlessYardDog
Larry Kudlow on Fox News: "The president is right. The cure can't be worse than the disease. And we're going to have to make some difficult tradeoffs." https://t.co/egaFaAhX9n
23 Mar, 05:09 PM UTC

@owillis
Top Trump economic advisor Larry Kudlow (who said weeks ago the virus was essentially contained) insists the corporate bailout money in the Senate bill "is not a slush fund." It would allow the Treasury Sec to spend on corporations at his discretion.

MGKovid-19
@mightygodking
PS: have said it before and will say it again: Larry Kudlow has spent his entire adult life being wrong about literally everything in order to advance conservative policy goals
23 Mar, 11:12 PM UTC

@hamrickisms
I fear that the president will take Larry Kudlow's advice over that of Dr. Fauci. Kudlow has been consistently wrong about the economy (3% growth) and the outbreak. Dr. Fauci has been a trusted public servant for decades. There are no easy answers, unfortunately.
23 Mar, 07:16 PM UTC

Brian Ruane
@g_brianr156
Lying Kudkow on Cnbc just said no one could have predicted the surge in cases from late Feb. He is a piece of shit. Every person with knowledge predicted it. He said this to support stock prices. He is reprehensible. Lying Larry Kudlow. GOP, inept corrupt unable , ICU
23 Mar, 05:11 PM UTC

Becky Werner
@bw71961
~ Larry Kudlow Makes The "Die Quickly, So We Can Restart The Economy" Argument For Trump. ~ Arguing that "the cure can't be worse than the problem," Larry Kudlow argued that reviving the economy was more important than saving lives. ~ https://t.co/G6zpiO5pBK
24 Mar, 12:03 AM UTC

Jason Hannigan #BoycottNRA 🌊🇺🇸
@CaptinMoonlite
An entire years income I will bet that before going into his daily shit show. @Trump talked to @larry_kudlow and @stevenmnuchin1 and not #Fauci. People are going to literally die from #COVID19 because Trump is listening to Kudlow and Mnuchin. #whitehousePressconference
24 Mar, 12:09 AM UTC

jeanie
@jeanie94092304
@justinbaragona You people have not even tested the first million. Maybe Trump, Fox News and Larry Kudlow can lead the charge into the crowd since they care so very much. Trump is panicking because there was no bailout resolved. Maybe one day he can come up with a solution on his own.
24 Mar, 12:09 AM UTC