Leicester is trending on Twitter. Popular tweets on Leicester.

Transfer News
@FootbalIStuff
Leicester City’s Faiq Bolkiah is the richest footballer in the world. He is the son of the Prince of Brunei. His net worth is $20 billion. 😳😳

PredictionHQ
@Predictionhq
Leicester City’s Faiq Bolkiah is the richest footballer in the world.He is the son of the Prince of Brunei. His net worth is $20 billion. https://t.co/wdmybQbDjH
30 Jul, 04:56 PM UTC

Fiery Archer
@Fiery_Archer
You don't have to be from or live in Leicester to look at the tweets in the #LeicesterLockdown trending hashtag and conclude that what the Government is doing to the mental health of the people in that city is now becoming beyond cruel and outrageous.
30 Jul, 07:50 PM UTC

Leicester City Mayor
@CityMayorLeic
Narinder. Like you I haven’t a clue what’s going on. I don’t even know who’s taking the decision and they certainly don’t involve anybody who knows anything about our city #Leicester. Just hoping they decide to let us out of this crude city-wide lockdown. https://t.co/8BCL0L4QNc
30 Jul, 07:50 PM UTC

trish
@trish64756655
How the government think giving Leicester the silent treatment is acceptable is an absolute joke, playing with people emotions and messing with their heads is toxic behaviour! #leicesterlockdown needs to end
30 Jul, 07:19 PM UTC

@PaulBrandITV
But note that the lockdown measures are not as draconian as Leicester's, where shops, restaurants and hairdressers still remain closed one month on.
30 Jul, 08:16 PM UTC

Simon #KBF
@Mind_Spy
Let the situation in Leicester and Manchester be another reminder to the rest of the country. NEVER GET TESTED.
30 Jul, 10:43 PM UTC

@Dr_PhilippaW
Perfect example of UK Gov’s rubbish comms! 2 hrs notice at 10pm at night! People in parts of N.England can’t meet another family in garden but could both go to pub! And mixing announcement of new #Lockdown with easing in Leicester- how to create confusion - or is that the point? 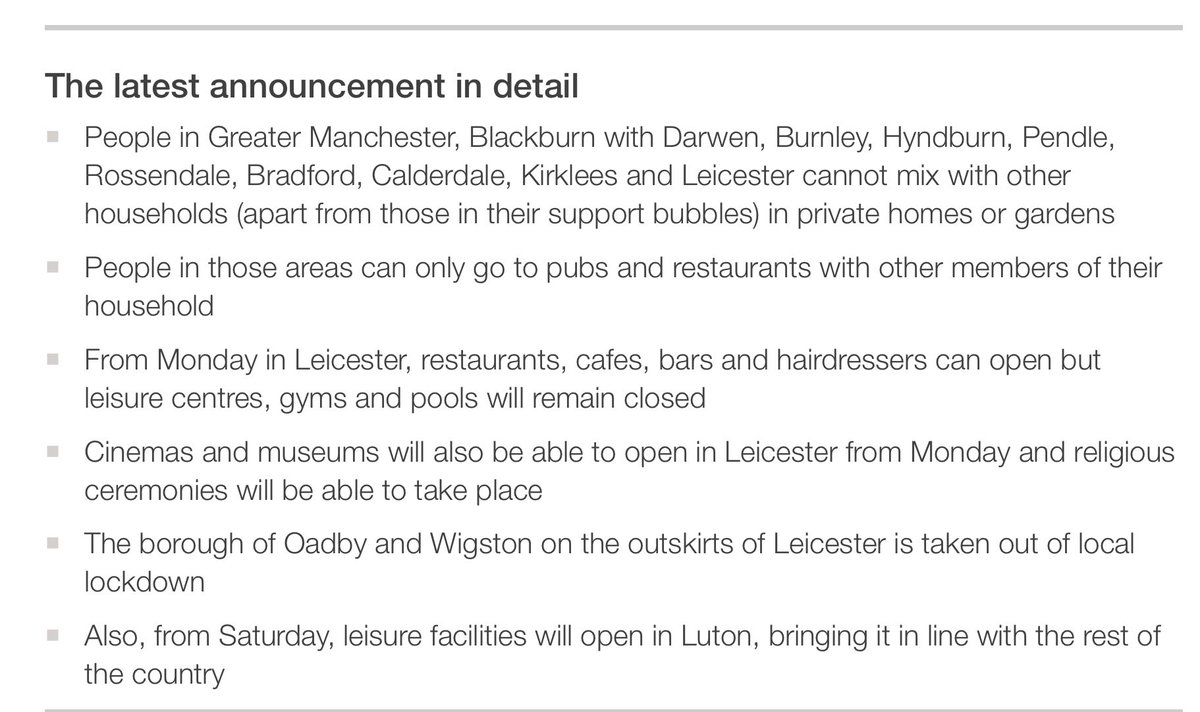 @JonAshworth
Tomorrow many across Leicester will be celebrating #EidAlAdha - but mosques are not yet able to reopen in Leicester (they can from next week). Please celebrate with your own household if at home. No visitors to your home or garden allowed. Please stay safe. #EidMubarak
30 Jul, 10:24 PM UTC

Elisha
@elishaleann87
can you please sign as don’t want to be fined for not sending my son back to school https://t.co/QeBi1j8jKj
30 Jul, 05:10 PM UTC

#HalloMyNameIsDan 🇲🇼
@MalawianMidwife
One of the amazing gifts I have ever received. Original @LCFC jersey all the way from Leicester, UK. From someone who wants to remain anonymous. Much appreciated 🙏 https://t.co/S8oBLl71yc
30 Jul, 06:07 PM UTC

bradley coombes
@bradleycoombes7
I Hope the people in these areas take the decision seriously but the poor people of Leicester left in limbo is unfair. Deep down I don't know if people will follow these rules but lets hope https://t.co/WSR8lf8fyg
30 Jul, 08:24 PM UTC

@ClaudiaWebbe
@c9shark Having 6 people in the garden will no longer be allowed for Leicester, Greater Manchester, parts of West Yorkshire & East Lancashire
30 Jul, 10:05 PM UTC

Tim Parker
@LeicesterTim
Leicester MPs also "understand" there can be no household mixing inside or in private gardens, other than in existing bubbles. These same bubbles can go on holiday/stay overnight, but not with anyone else.
30 Jul, 09:22 PM UTC

Hemang Ghoda
@Hghoda
“Bradford along with other towns in Yorkshire, Leicester, Blackburn, Oldham and Rochdale have seen recent outbreaks peaking among Asians” Backlash? Of course. Check out all the countries where there is Muslim community. They have facilitated to spread virus like Tabligi Jamat https://t.co/uy3MJcDR34
30 Jul, 09:47 PM UTC

David Hundeyin🔴
@DavidHundeyin
Samuel is a student at De Montfort University in Leicester who had no choice but to get a job at an elderly people's care home in a country where 1 in 5 care home residents has died of COVID-19. Watch his full story in the link below https://t.co/RlJXcoMcud https://t.co/rNgbjCAmmJ
31 Jul, 01:01 AM UTC

@leicslive
The Government has made the announcement that it is changing the restrictions https://t.co/gYBVSgDz6W
30 Jul, 09:30 PM UTC

Dean Eldredge
@DeanEldredge
Heartbreaking to see my hometown left in complete limbo by this indecisive, contemptible government. A blanket lockdown for all, despite data showing this was inadvisable, is harming health and destroying businesses. The people of Leicester deserve much better. #LockdownLeicester
30 Jul, 08:18 PM UTC

@DailyMirror
Pubs reopen in Leicester - but residents not allowed to visit each other's homes https://t.co/79WCp5ozuk 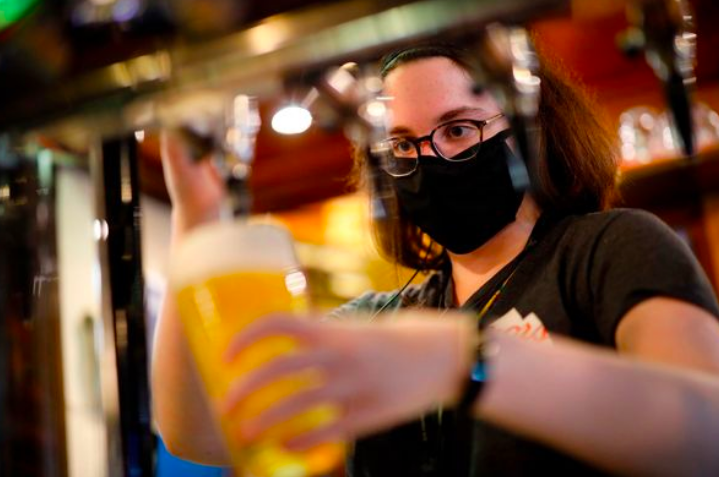 @CCLeicsPolice
https://t.co/LwCT93Pti4 For those seeking information about the protected area in #Leicester #Oadby #Wigston this link has some details Final regulations awaited @leicspolice 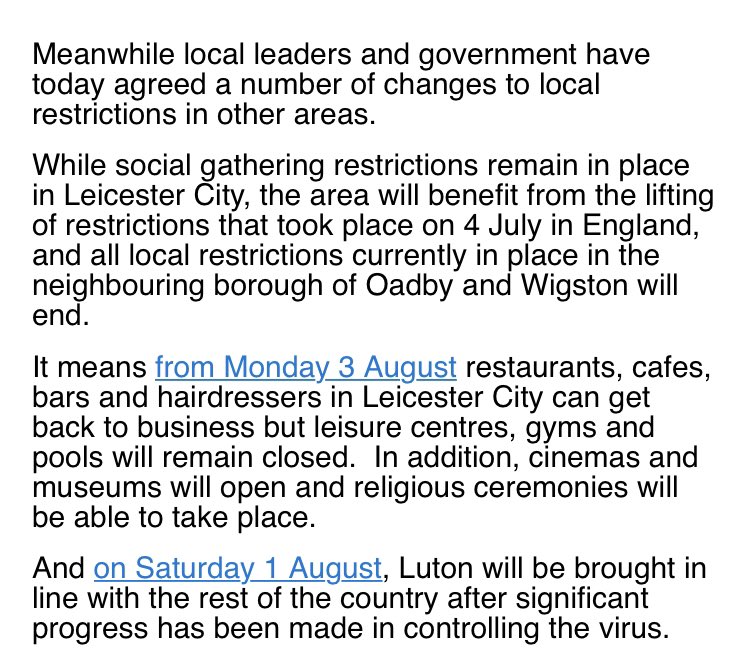 Nicola Lauren
@MissNic
@Keir_Starmer I appreciate the north needs clarity but what about Leicester? Matt Hancock didn’t even mention us on the news but then we appear as a footnote on his tweet as if we should all know? What on earth is going on? We’ve been in lockdown since March!
31 Jul, 03:42 AM UTC