@joncoopertweets
Comment with a ❤️ If you agree Letitia James is a national hero.
22 Sep, 06:42 PM UTC

Jeff Tiedrich
@itsJeffTiedrich
pro tip: if you did handstands when James Comey meddled six days before the 2016 election, kindly sit the fuck down and shut the fuck up about anything Letitia James is doing right now to an actual criminal who isn't even on any fucking ballot, for fuck's sake
22 Sep, 04:22 PM UTC

Duty To Warn 🔉
@duty2warn
Letitia James claims she’s found 200 acts of fraud. Alvin Bragg must not be a very good prosecutor if he can’t convince 12 New Yorkers that was no accident.
21 Sep, 10:50 PM UTC

@SRuhle
For YEARS, Trump said he could release his taxes bc the IRS was auditing him. If that is true- where is the audit & if Letitia James is right, shouldn't that audit result in BIG BIG Trouble?
22 Sep, 10:08 AM UTC

@NewYorkStateAG
Donald Trump's purported net worth is rooted in incredible fraud and illegality.   Actions have consequences. I'm going to ensure that no one is able to evade the law because no one is above it. https://t.co/1qAen1rM9c
22 Sep, 03:39 PM UTC

Don Lewis
@DonLew87
Hats off to Letitia James and the 11th Circuit for making it clear that Trump deserves zero preferential treatment. Today was a Good Day.
22 Sep, 01:42 AM UTC

Janice Hough
@leftcoastbabe
Stephen Colbert says Mar-A-Lago is valued at $75 million. But according to Letitia James, Velveeta Voldemort claimed it was worth $739 million "Well of course it's worth less now, the FBI took away all the most resellable documents."
22 Sep, 06:58 AM UTC

Republicans against Trumpism
@RpsAgainstTrump
This is INSANE. Lara Trump, the wife of Eric Trump, just blamed NY AG Letitia James for the death of countless children, claiming that The "Eric Trump Foundation" was somehow hurt by the investigation. There's no bottom.
22 Sep, 04:44 PM UTC

Jack Hopkins
@thejackhopkins
Letitia James is effing BRILLIANT. By tweeting things like “The Art of the STEAL!” She is successfully baiting him into social media rants that will prove to be useful, not only to her, but to Fani Willis and the DOJ. She knows He. Cannot. Help. Himself.
21 Sep, 10:57 PM UTC 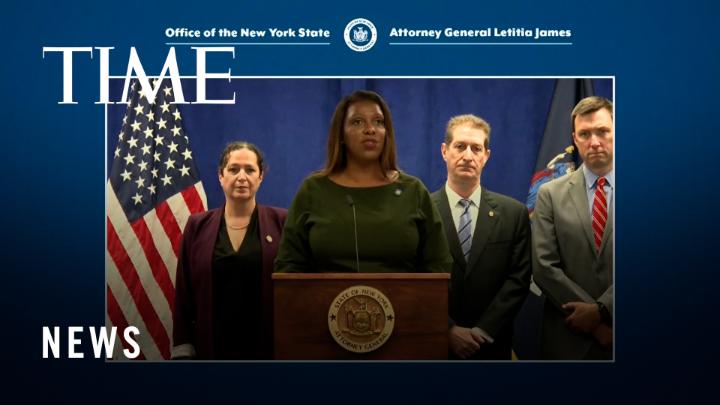 Jeffrey Ⓥ
@LiftForever67
"Letitia James revealed the property at Mar-A-Lago has a value of $75 million. But Trump claimed it's worth $739 million. Of course it's worth less now, the FBI took away all the most re-sellable documents." #StephenColbert 😹 #TrumpCrimeFamily https://t.co/uoWDl8xXtr
22 Sep, 04:15 AM UTC

Dr G
@Justsmackit
Trump has claimed that he has been under audit from the Internal Revenue Service for over a decade now. If Letitia James could find all this fraud, why didn’t the IRS?
22 Sep, 12:12 PM UTC

@newsmax
"I like Letitia James," Alan Dershowitz tells Newsmax, "but she campaigned on the promise to get Trump before seeing any evidence." "This doesn't pass the test of a legitimate civil complaint." https://t.co/3s6hQ4vGw1
22 Sep, 09:42 AM UTC

Blue In '22
@kene0222
Sorry, Lara, but your husband used the charity to enrich himself, you, and your family. And because of your daddy-in-law's mishandling of the pandemic, almost a million died because of his stupidity. So, STFU, and hire a good lawyer. You gonna need one! https://t.co/YmuYXX10GD
22 Sep, 08:08 PM UTC

AVΞNGΞR RΞSISTΞR
@AvengerResister
Letitia James is about to lay the smack down on Trump, and I'm here for it.
22 Sep, 07:52 PM UTC

MadDogPAC
@maddogpac
Since Stepford Lara is running her robot mouth about how “kids died because Letitia James made Eric stop raising $ for St Jude,” here’s a reminder of all the many ways Trump greed was stealing from St Jude via self-dealing: https://t.co/Tgc891I3s1
22 Sep, 08:16 PM UTC

@ChuckCallesto
DID YOU KNOW: The DOJ had the case that NY AG Letitia James filed against Trump, LOOKED AT IT VERY HARD AND DID NOT peruse any charges? POLITICAL THEATER 101...
22 Sep, 07:49 PM UTC

@RepTenney
Attorney General Letitia James is one of the nation’s most corrupt and partisan AGs. Crime is skyrocketing in New York, and all she’s cared about from the start is her partisan witch-hunt to take down Donald Trump. The people of New York deserve better. 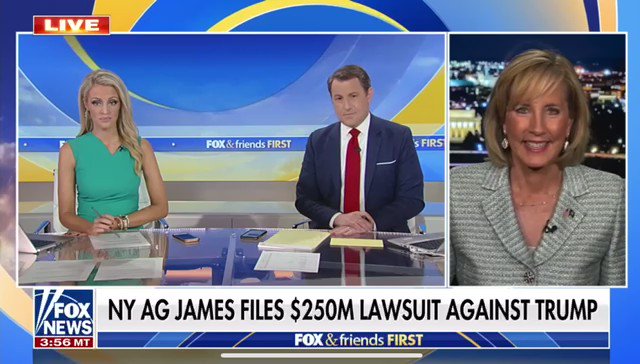 Dan "I Stand With Ukraine" P
@ddanpereira
New York AG Letitia James is a BADASS who is not afraid of White "Rich" Men like Trump. The civil lawsuit she announced against him, the "kids" & Trump Org, should motivate others like Alvin Bragg, Fani Willis & Merrick Garland to do the same. #TheView #MorningJoe #DeadlineWH
22 Sep, 04:58 PM UTC

Nick Walden Poublon
@NWPinPDX
THE TOWER TOPPLES: Letitia James unleashes her very detailed lawsuit against Trump, his business and his children. Trump vastly inflated his worth and got loans he didn’t qualify for. Trump was NEVER the businessman he claimed to be. https://t.co/nkdW1HFH2N
22 Sep, 08:25 PM UTC

Bill Peguillan
@BillPegs
For NY AG Letitia James to be losing in the latest polls to AG candidate Michael Henry…she must be really pissing off a lot of NYers which normally leans heavy Democrat We know she’s been on Trump Hunt since before she was even elected. People see thru her lawsuit announcement! https://t.co/VAXuk5p4X0
22 Sep, 01:56 PM UTC

Karl Rosenfeld
@kneerecon
Trump’s legal bills are being footed by his donors. You knew this was coming. Our guy worth 4 billion, or is it 6 billion, no it’s 10 billion will grift his rich and not so rich to help defend him. Anyone have the address? https://t.co/WC3MfxXFDn
22 Sep, 10:54 AM UTC