@Frank_Frangie
Very disappointed Lot J didn’t pass. I’ve seen so many vibrant entertainment/business/residential districts located near stadiums in NFL. For a moment I was convinced we would have one, too. Like Mark Lamping, I respect the process. Just very disappointed.
13 Jan, 02:59 AM UTC 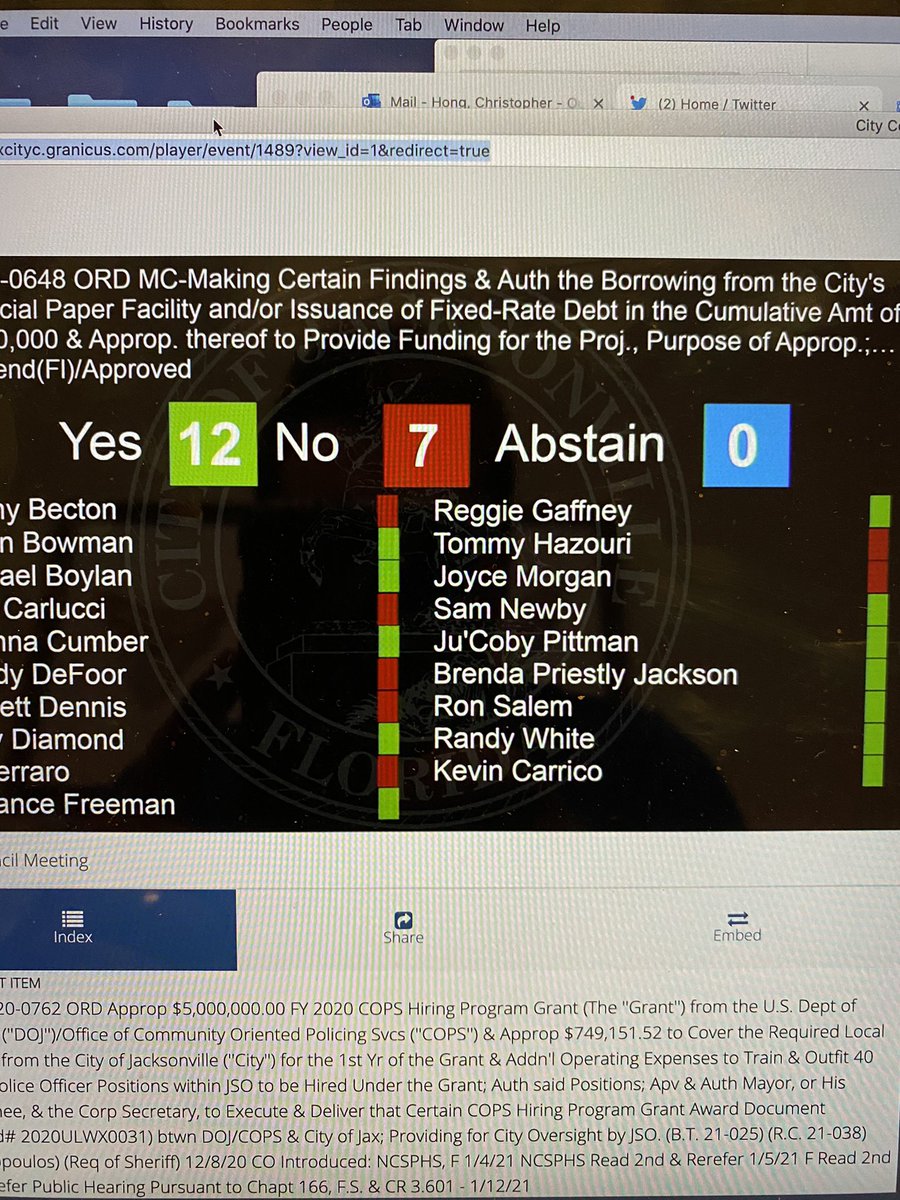 @lennycurry
A majority of the Council voted in support of Lot J. However, the rules on this vote required a super majority of 13 votes. The vote was 12 in favor and 7 against. The legislative body spoke and unfortunately Lot J will not move forward.
13 Jan, 02:40 AM UTC

@jpshadrick
Mark Lamping: “It’s time to turn the page on Lot J. We will now focus our attention on the Shipyards.” #LotJ #Jaguars
13 Jan, 02:35 AM UTC

@NateMonroeTU
Lot J's "entertainment venue" was going to be smaller than the former Landing (75,000 sq. feet vs. 120,000), and it was going to have two low-rise apartment complexes and maybe a hotel - something like a themed Marriot. That was simply not going to make Jax a destination city. https://t.co/Xio5nrwJxl
13 Jan, 01:28 PM UTC

@BenBeckerANjax
Source close to the situation tells me “Lot J could have passed if Curry had just followed the DIA process.”
13 Jan, 02:38 AM UTC

@BenBeckerANjax
Matt Carlucci on Lot J vote “We’re helping to regain trust in our community. It can start over but they have to make a better deal for the community and they need to include the public in the process and make it transparent.”
13 Jan, 02:48 AM UTC

The Jaxson
@TheJaxsonMag
Worth noting: the council members who patted themselves on the back for nixing minuscule tax proposals for quality of life voted for spending $248 million in taxpayer money for Lot J. #priorities
13 Jan, 03:39 PM UTC

@FCN2go
IN CASE YOU MISSED IT: City Council failed to pass the Lot J plan by one vote last night. Here's what that means moving forward. https://t.co/DMSKi0CJG5
13 Jan, 02:03 PM UTC

Jeff Whitaker
@JWDOME
@NateMonroeTU This is what most people think Lot J was going to be.
13 Jan, 02:57 PM UTC

Wiggle Man
@Wiggle__Man
@BCBCouch They keep saying Lot J is dead. Why wouldn’t they resubmit through the normal channels if they really want it? I mean, we may know why, but that’s a question for the Jags I’d think.
13 Jan, 03:04 PM UTC

@Frank_Frangie
@AndyGillis904 @BoldCityCap @HaysCarlyon You must not listen often. I’ve had that opinion - and said it consistently and loudly - since the Lot J project was first introduced. I think it should have passed and am extremely disappointed it didn’t. Label that however you like.
13 Jan, 02:44 PM UTC

Jason Huckleberry
@JasonHuckLewis
Khan is no doubt brilliant in business. Which makes the Lot J execution all the more puzzling. Observing recent history and then betting on the Mayor, would payoff, is puzzling. Maybe it really was just an all or nothing play, and there was no other Avenue.
13 Jan, 03:52 PM UTC

The Jaxson
@TheJaxsonMag
A failed proposal in July by @matt_carlucci would have raised taxes 1/4 mill, about $12.50/year for a $100k home, to generate $16 million for quality of life. By contrast Lot J would have committed $248 million in taxpayer dollars for 400 apartments and a smaller Landing.
13 Jan, 03:45 PM UTC

St. Louis Chatter
@RealSTLChatter
@ProFootballTalk This is the start of how a team gets relocated. Doesn’t matter if city comes up with a stadium task force later down road. NFL will claim that declining Lot J meant Jax wasn’t serious and will wall any future effort. Coming from a St. Louis fan who watched this exactly play out
13 Jan, 03:08 PM UTC

sb
@sbduvalfl
Lot J was always a bad deal and shouldn’t have passed. Glad it didn’t. Work with new admin when Curry is out. He is tainted at this point. Fear of Jags leaving chatter was mainly from account of their lobbyist, no real threat here IMO.
13 Jan, 03:07 PM UTC

ItsMalB86 🐊🍻💫
@malbaker1986
I just want people to answer me on what we’re going to do with the $250 mill that the city isn’t going to use for Lot J. I don’t wanna hear anyone complaining about nothing to do downtown or how bad downtown is if you aren’t onboard with Lot J https://t.co/22VrX0eSl5
13 Jan, 02:17 PM UTC

cully. 💋
@racheldarnecia
I wonder why they voted no for lot J.. I need to read up on that cause I just don’t understand this country ass city smh
13 Jan, 02:23 PM UTC

Robert Arleigh White
@robertarleigh
Thanks to everyone who worked on this. It's not over, though, as the Shipyards and Metro Park developments are coming next. Please read this article and stay vigilant on downtown development -- https://t.co/hgBHFWroN4
13 Jan, 03:18 PM UTC

Ethan
@EthanVanVoorhis
Lot J fails. I’m disappointed and scared for the future of the franchise. But hey, at least were not the Houston Texans.
13 Jan, 03:10 PM UTC

Jim Minion
@FloridaMinion
Hallelujah! Kudos to the sharpness of the council auditors and the clear-mindedness of the 7 "No" votes on the #Jacksonville City Council! #LotJ can go fund itself. https://t.co/cz5swJNP78
13 Jan, 02:49 PM UTC