Louisiana is trending on Twitter. Popular tweets on Louisiana.

@ACLU
BREAKING: The Supreme Court struck down a Louisiana law that was designed to close abortion clinics and cut off access. This case should never have made it so far. We will continue to fight to ensure everyone can get the care you need, no matter where you live.
29 Jun, 02:25 PM UTC

@SCOTUSblog
#SCOTUS, by vote of 5-4, strikes down Louisiana law requiring doctors who perform abortions to have right to admit patients at nearby hospitals
29 Jun, 02:13 PM UTC

@NPR
BREAKING: The Supreme Court has upheld a key abortion rights decision — invalidating a Louisiana law that required doctors at clinics that perform abortions to have admitting privileges at a nearby hospital. Chief Justice Roberts joined the court’s four liberals.
29 Jun, 02:19 PM UTC

@marklevinshow
Roberts has destroyed any credibility the Court may have had.  He’s a disgrace. https://t.co/h1UglAODkV
29 Jun, 03:09 PM UTC

@NYGovCuomo
Today the Supreme Court reaffirmed what was clear - Louisiana’s law purporting to protect health and safety is unconstitutional and was always about restricting reproductive rights. We will not go back.
29 Jun, 02:19 PM UTC

@GovMikeHuckabee
John Roberts is an empty black robe who wants to be loved by liberals who believe in legislating from the bench. Mr. Chief Justice, if you want to be a legislator, resign and run for Congress. But at any rate, just resign! https://t.co/jqrLvfgAZq
29 Jun, 03:07 PM UTC

@BBCBreaking
In a landmark ruling, the US Supreme Court strikes down a Louisiana law restricting abortions as unconstitutional https://t.co/oXz8Nekze5
29 Jun, 02:29 PM UTC

@WSJ
Breaking: In a 5-4 vote, the Supreme Court struck down a Louisiana law forbidding doctors from performing abortions unless they held admitting privileges at a nearby hospital https://t.co/Q1FqCjNiUq
29 Jun, 02:24 PM UTC

@neal_katyal
"The legal doctrine of stare decisis requires us, absent special circumstances, to treat like cases alike. The Louisiana law imposes a burden on access to abortion just as severe as that imposed by the Texas law, for the same reasons. Therefore Louisiana’s law cannot stand" CJ op
29 Jun, 02:13 PM UTC

@AndrewYang
The Supreme Court just sent a powerful message that women’s reproductive rights are fundamental rights. No partisan law can take that away. Great ruling and thank you to @NARAL @ilyseh and those who fight for women’s right to choose every day. 🙏 https://t.co/H1gL9z8suA
29 Jun, 03:40 PM UTC

@RepDougCollins
Unbelievable. The Supreme Court just struck down Louisiana's #ProLife law, which requires abortion providers to protect women's health and safety. This decisions threatens both the dignity of unborn children and the health of vulnerable mothers.
29 Jun, 04:05 PM UTC

Teri Kanefield
@Teri_Kanefield
Another blow to the Fox-Trump-GOP Evangelical base. Supreme Court strikes down Louisiana abortion restrictions https://t.co/pXvgzoXgbU via @CBSNews I don't think the MAGA people will be happy about this. Remember how angry they were last week with the gay rights case?
29 Jun, 03:05 PM UTC

@CongressmanRaja
This is a major victory for a women’s right to choose, but we must keep fighting until every woman enjoys the right to freely make decisions about her own body. https://t.co/Rl807WtOcD
29 Jun, 05:03 PM UTC

@TheAtlantic
In a 5-4 vote, the Supreme Court struck down a Louisiana law that would require abortion doctors to have admitting privileges at a nearby hospital. What the case really spoke to, one expert told Emma Green, is "whether the Court is committed to precedent.” https://t.co/vMRdM48z8j
29 Jun, 03:10 PM UTC

@NAACP
Today's #SCOTUS ruling against Louisiana's restrictive abortion law is a victory for women of color & their equal access to abortion services. But the fight against two-tiered #healthcare system is not over. We must stay vigilant. https://t.co/uGHIjYtza4
29 Jun, 05:38 PM UTC

@ABCPolitics
.@GStephanopoulos on Supreme Court decision overturning Louisiana abortion law: "Pres. Trump and his conservative supporters have been proud of his choices for the Supreme Court...but this will be one more reason to be unhappy with Chief Justice Roberts." https://t.co/uoeS0uRJDO 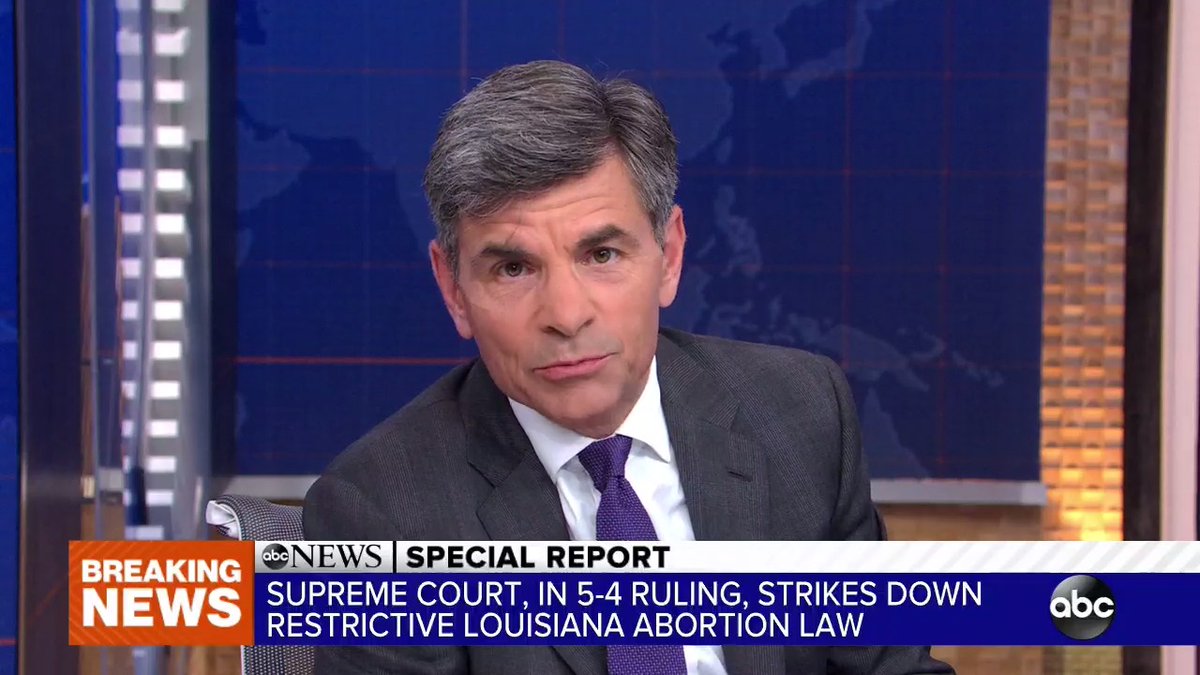