Ron Filipkowski 🇺🇦
@RonFilipkowski
Trump endorsed congressional candidate JR Majewski today says that the reason why there is no record of him serving in combat in Afghanistan in his service record is because it is “classified.” https://t.co/FhHdo2TkuN
23 Sep, 05:33 PM UTC

@MeidasTouch
A Navy Veteran just blasted MAGA Republican House candidate J.R. Majewski for lying about being a combat veteran who served in Afghanistan with the perfect takedown. Have a watch. https://t.co/6X2dNaAyHo
23 Sep, 01:46 AM UTC

RadicalLeftScoundrelCheese
@alspruce
@natsechobbyist @RonFilipkowski If Majewski's service in Afghanistan was classified, he shouldn't be blabbing about it.
23 Sep, 05:50 PM UTC

@joncoopertweets
MAGA Republican candidate J.R. Majewski LIED about his military service, claiming he was deployed to Afghanistan after 9/11 when in reality he spent 6 months loading planes at an air base in Qatar. In response, the House GOP’s campaign apparatus PULLED $1 million in support ads.
23 Sep, 06:06 PM UTC

Duty To Warn 🔉
@duty2warn
Trump endorsed Ohio House candidate and lying sack of shit JR Majewski gave a press conference and said: "I am not a lying sack of shit. (We wrote that part.) The reason why there's no record of me serving in Afghanistan is cause it's 'classified.'” Occam's Razor says not likely
23 Sep, 08:12 PM UTC

@renato_mariotti
Do we know whether Joe Biden has silently declassified everything about Mr. Majewski with his mind? https://t.co/7BJwooe02Q
23 Sep, 06:22 PM UTC

@ehananoki
J.R. Majewski is trying to do damage control after the AP found he misrepresented his military service. Last night he appeared with Teddy Daniels and laughed after Daniels called me a "homo-looking dude" for writing about the story. https://t.co/vfmZ07clNE 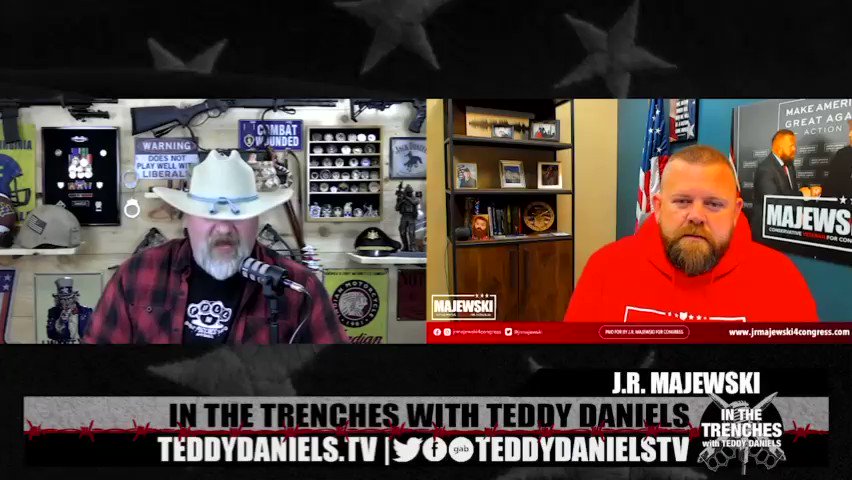 Stonekettle
@Stonekettle
Majewski wants voters to think he's some bad ass steely-eyed killer on a secret mission, but he doesn't even have the courage to be honest about his own record. He's a coward. But it's worse than that. A lot worse. 4/
23 Sep, 09:27 PM UTC

R Joseph
@rjoseph7777
@RonFilipkowski As former USAF... That is NOT how a career in the US Air Force works. JR Majewski is a liar IMO! Military service records are public for employment reasons... only military duties are classified.
23 Sep, 05:42 PM UTC

Leah McElrath 🏳️‍🌈
@leahmcelrath
@JRMajewski “Military documents…indicate Majewski never deployed to Afghanistan but instead completed a six-month stint helping to load planes at an air base in Qatar, a longtime U.S. ally that is a safe distance from the fighting.” https://t.co/jSrgRa6gBF
23 Sep, 08:30 PM UTC

Stonekettle
@Stonekettle
Again, the guy served. When a lot of people didn't and that should be enough. That's what America says, right? Tankwewferuserbice. Right? But it's not. And it's not because of assholes just like Majewski, who have turned service into some dick measuring contest. 6/
23 Sep, 09:32 PM UTC

@cenkuygur
J.R. Majewski is GOP candidate in Ohio who lied about being a combat veteran. It won't cost him a single Republican voter. GOP voters love liars. This is also a sign of the times that this was bigger story than him believing there is a Satanic pedophile ring leading the country.
23 Sep, 09:28 PM UTC

@ColMorrisDavis
“Upon completion of ALL immunizations …” So Majewski rolled up his sleeve and/or dropped his drawers and got ALL of the shots the Air Force mandated, not just the ones he chose to take. https://t.co/5MaQ05MNgE
23 Sep, 08:06 PM UTC

1stCavAM1972
@1stCAV_AM_1972
@alspruce @OddlyB @natsechobbyist @RonFilipkowski Majewski is not the only GOP who has lied about a military experience. Virtually every GOP who has been in the military has what looks like medals that do not fit those members. “Bronze” stars with no conflict seems to be a favorite. Lawyers especially.
23 Sep, 08:38 PM UTC

VoteBlue in 2020
@VoteBlueIn2020
@RonFilipkowski More LEFTIE LIES!!! Trump is being misquoted again. Trump ACTUALLY said that he used the power of his mind to classify the fact that JR Majewski is lying about his service record. America, you are welcome!
23 Sep, 06:27 PM UTC

@VladDavidzon
Majewski is running against Rep. Kaptur- who is co chair of Ukrainian Caucasus in congress and a great friend of Ukraine. Let’s hope he loses https://t.co/HdD0R4WyyP
23 Sep, 09:23 PM UTC

EducatedWildChildGrownUp☮️
@ListenHere12
@RonFilipkowski Nothing turns my stomach more than Stolen Valor. Majewski never deployed to Afghanistan but instead completed a six-month stint helping to load planes at an air base in Qatar, a longtime U.S. ally that is a safe distance from the fighting.
23 Sep, 08:39 PM UTC

EducatedWildChildGrownUp☮️
@ListenHere12
@covie_93 @RonFilipkowski Majewski never deployed to Afghanistan but instead completed a six-month stint helping to load planes at an air base in Qatar, a longtime U.S. ally that is a safe distance from the fighting.
23 Sep, 08:41 PM UTC

Dan Dwiggins
@DanDwig79
@TheRedPen3 @RavagerMog @HeadAsploding @Popehat His record, such as it is, is complete. No holes. 1 overseas deployment to Qatar, as a flight attendant. Highest ribbon is AFGC, and he was discharged with 4 years in as an E2. That's not the record of someone who was off on classified missions. https://t.co/005l3s928F
23 Sep, 09:21 PM UTC

CallTime
@CallTime4
@WriterJCYoung @RonFilipkowski @JoeBiden Whats to unclassify.. but yes.. please please do Mr President.. De Classify Mr Majewski's record so we can all bask in the glory of his service. Or we can ask Trump to simply 'think' the declassification as he has super powers Thank you for your time.
23 Sep, 07:35 PM UTC