Manfred is trending on Twitter. Popular tweets on Manfred.

@thatgirlondeck
at last, rob manfred has achieved his ideal shortened length of a ballgame: 0 hours, 0 minutes
02 Dec, 06:12 AM UTC

@chelsea_janes
Clark on Manfred's letter, posted to social media last night: "It would have been beneficial to the process to have spent as much time negotiating in the room as it appeared was spent on the letter."
02 Dec, 04:40 PM UTC

@Travis_Sawchik
Manfred this am: "The most negative reaction we have is when a player leaves in free agency." Bizarre. One team gains the free agent, and the losing owner/team could make a better offer. Also, the vast majority of players are never free agents.
02 Dec, 03:57 PM UTC

@middlebrooks
Any respect that remained between the players and Manfred is long gone now that he admitted to changing the ball to fit his wants and needs during the season. WITHOUT TELLING THE PLAYERS. That’s why the league shouldn’t be able to own Rawlings.
02 Dec, 06:50 PM UTC

@ThreeTwoEephus
Insulting the intelligence of his audience has become something of a signature move for Manfred. I recall when he tried to explain to a guy who toured as a musician for ten years how minor-league pay was the same way musicians got paid (it was not the same, at all) https://t.co/W99jSOw6Oe
02 Dec, 05:18 PM UTC

I support the players! ⚾
@Giants55
Good morning to everyone except @MLB owners and Rob Manfred
02 Dec, 04:04 PM UTC

Caleb
@513Caleb
Manfred is trying to convince me that baseball doesn’t exist, but I have this Joey Votto home run ball just sitting in my room https://t.co/3Lr40Bk78j
02 Dec, 06:23 PM UTC

@kileymcd
4) Manfred's argument is contingent on teams actually spending to their payroll ceiling (they aren't), that revenue-sharing can't change to even this a bit (it can), and that money = quality of team (TB/OAK/MIL prove it's competency, LAD shows $ helps) https://t.co/s6GiY9XAhn
02 Dec, 06:51 PM UTC

@DSzymborski
Last one for now, I promise! In this computer-generated letter-completion from Rob Manfred, he is very mad about the Giants and Reds stealing his car. 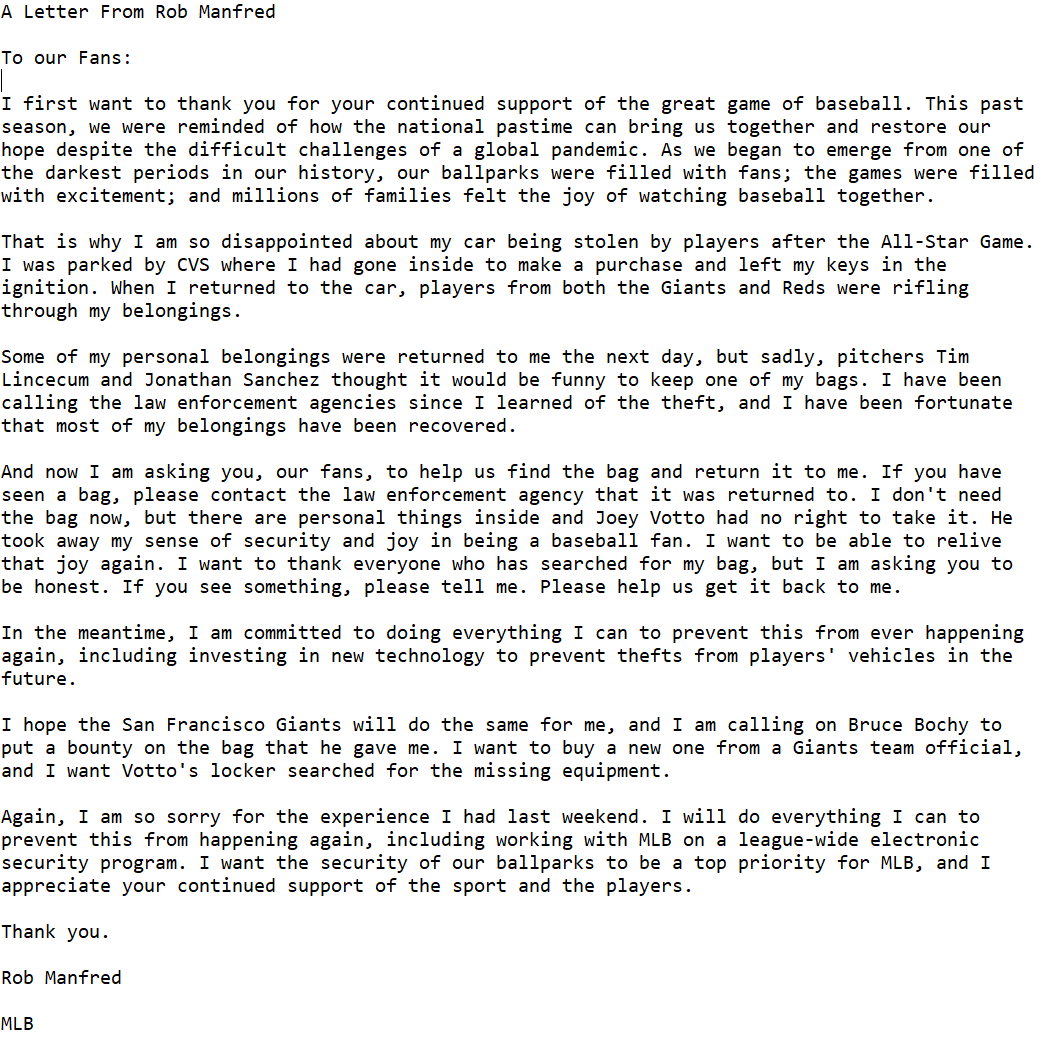 Kurt Mensching
@KurtJustKurt
"Why do we have to pay them at all? They get the honor of calling themselves Major League Baseball players. Think of the exposure!" -- Manfred (probably) https://t.co/fkUfXtNxCL
02 Dec, 06:50 PM UTC

C. Hall
@cjhall03
Rob Manfred has got to be the worst commissioner in all of professional sports. After almost 30 years of peace between the MLBPA and MLB, he finds a way to fuck it up. Unreal.
02 Dec, 04:55 PM UTC

Torts Illustrated
@TortsIllustrtd
Every time Rob Manfred says something is bad for “the game” just go ahead and substitute that for “the owners”
02 Dec, 06:50 PM UTC

@MichaelBaumann
@Mike_Ferrin Yeah as much as Rob Manfred and I don't see eye to eye on certain issues, he really bailed me out here.
02 Dec, 06:57 PM UTC

WORLD SERIES CHAMPS
@opallo30
I honestly didn’t think a MLB Commish could be worse than Selig but then Manfred came along and oh boy did he prove me big time wrong. Dude Just apparently hates the sport he’s in charge of, damn.
02 Dec, 06:57 PM UTC