Medicaid is trending on Twitter. Popular tweets on Medicaid.

@KenPaxtonTX
Planned Parenthood took advantage of Texans, violated medical standards, & lied. While they’re no longer a TX Medicaid provider, they still collected millions for their bloody biz. I’m suing to get that wrongly-syphoned money back for Texans and stand for life. 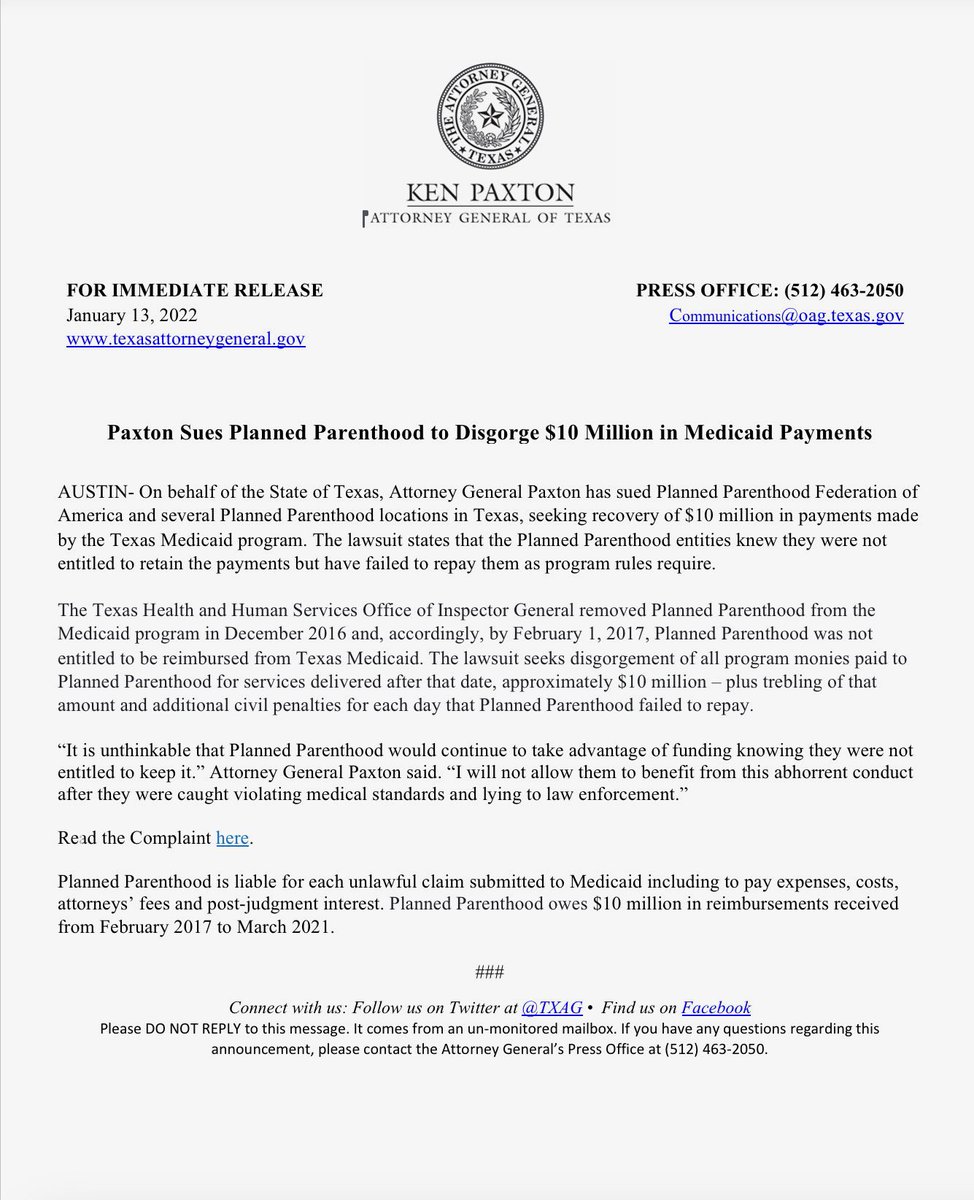 @DiamondandSilk
BREAKING: The Supreme Court Blocked mandates for workers, but not for health-care workers at facilities that receive Medicaid and Medicare funds! https://t.co/XB4uC9cg7S
13 Jan, 09:09 PM UTC

@RepJayapal
It’s almost like people want health care, who could’ve guessed! It’s time to go a step further — it’s time for Medicare for All so we guarantee health care as the human right that it is. https://t.co/bh8HALk0pJ
13 Jan, 04:15 PM UTC

ThatUmbrellaGuy
@ThatUmbrella
Forget the argument on vaccine or not for a minute. You know who the Supreme Court's mandate on health care workers RE Medicare/medicaid impacts? THE POOR If providers stop accepting that OR MORE walk, that impacts those TRULY in need for physical and mental treatment (1/2)
13 Jan, 09:28 PM UTC

@bluestein
Senate Minority Leader Gloria Butler said she can think of plenty of other ways to spend Georgia’s surplus: “The first thing that would be on my list is to expand Medicaid.” #gapol 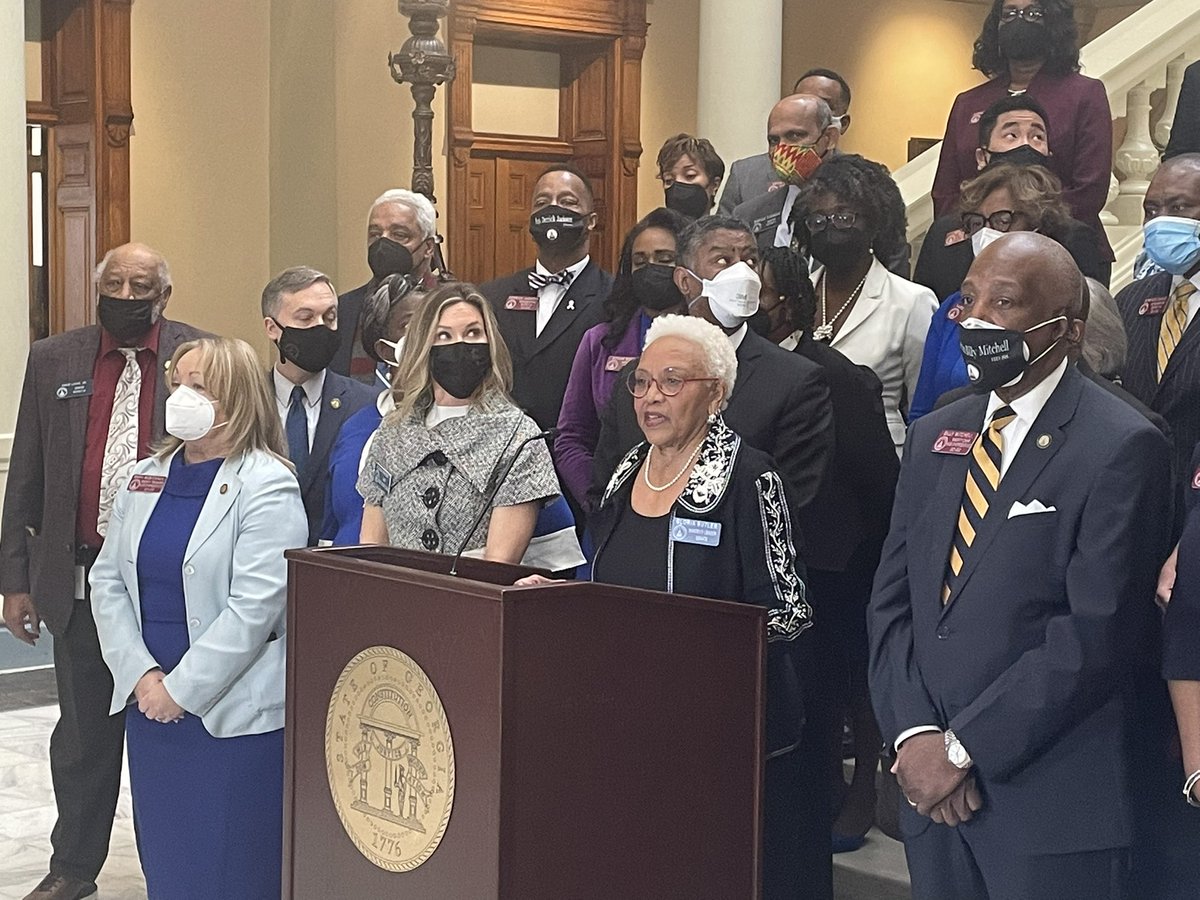 ThatUmbrellaGuy
@ThatUmbrella
Where I live, VERY FEW providers that accept Medicare/Medicaid, and this will cut that number even more. It won't just impact quality of care. It will impact AVAILABILTY of care. People on both sides celebrating that REALLY need to think about what they're applauding.
13 Jan, 09:30 PM UTC

@GeorgiaDemocrat
A good Governor would fully expand Medicaid and mount a meaningful campaign to protect Georgians from COVID-19 – not work to ban books and put more guns on our streets. #gapol
13 Jan, 11:26 PM UTC

Sarah Unsicker
@SarahUnsicker
If the #moleg week weren't bad enough already, the chair of the House budget committee filed a bill that would repeal #Medicaid expansion in Missouri. It's already been assigned to the budget committee. https://t.co/5vngAY3mgM
14 Jan, 12:25 AM UTC

@WJHL11
Northam delivered his final Commonwealth address on Wednesday, highlighting the expansion of Medicaid in Virginia, the state’s economic growth and his work to combat the spread of COVID-19. https://t.co/nZ6u1OrYR1
13 Jan, 09:45 PM UTC

@SSWorks
"Over the 15 years I have worked at the ARC, inquiries have become increasingly more complicated because of the callers’ difficulty navigating healthcare and financial benefits such as Medicare, Medicaid and Social Security." - Patti Szarowicz, @AtlantaRegional
13 Jan, 03:14 PM UTC

Matt Calcara NOT AN ELECTION OFFICIAL
@MattCalcara
Even more remarkable, she did it w/one hand tied behind her back in terms of #ksleg refusing to expand Medicaid (which would have been a fiscal windfall, esp. b/c her budget already accounted for all of the state's costs) & slashing investment in higher education funding.
13 Jan, 05:01 PM UTC

State of Corruption
@State0fCorrupt
Just before he became the CEO he sued the state of New Hampshire for taxing Medicaid.Meaning just as the cartel and treatment centers commit Medicaid fraud the Catholic Medical Center don’t pay taxes on the profit. It was rigged by Walker. @State0fCorrupt @letshearthetru @mggrond
13 Jan, 07:21 PM UTC

🇺🇸Mark America🇺🇸 (@markamerica on GETTR)🍊
@markamerica
You know what should really happen here? Hospitals, if their boards and executives weren't such cowardly dipshits, would immediately say: "Fine, we're not accepting medicaid and medicare payments any longer."
13 Jan, 08:11 PM UTC

Rhode Island House of Representatives
@RIHouseofReps
Op-ed by @LianaCassar & @bridget4ri in @WhatsUpNewp: This is the year that Rhode Island stops discriminating against public servants, their families and people who use Medicaid. It is a question of health equity. ⬇️ https://t.co/aJUxlKCRfJ
13 Jan, 11:06 PM UTC

The Heartland POD
@TheHeartlandPOD
FACT: @MissouriGOP is trying - AGAIN- to undue the will of the voters and take away the Medicaid expansion. Again. Maybe they need reminded that the welfare of people is the supreme law of the land in #Missouri #moleg #healthcare #democracymatters https://t.co/3XKndNiEmQ
14 Jan, 12:38 AM UTC

JJ
@j456798
Leaving the healthcare mandate in place is a victory for those who can afford concierge medical services from doctors who don’t need Medicare or Medicaid reimbursements. The poor get screwed again.
13 Jan, 11:27 PM UTC

⚡️ Dr. WonderWoman4USA ⚡️
@WonderWoman4USA
To clarify, #WeThePeople fund Medicare & Medicaid, so WE should get to decide whether vaccines should be mandated for health care professionals. I vote NO. https://t.co/4ZwlDahCcn
14 Jan, 12:48 AM UTC

NEMO
@NEMOCookFan
@SarahUnsicker Good grief. MO GOP considering an income tax REBATE the coffers are so full, but they can't afford the Medicaid expansion the feds mostly pay for and Missourians ALREADY voted for, right? #nasty #moleg
14 Jan, 12:49 AM UTC 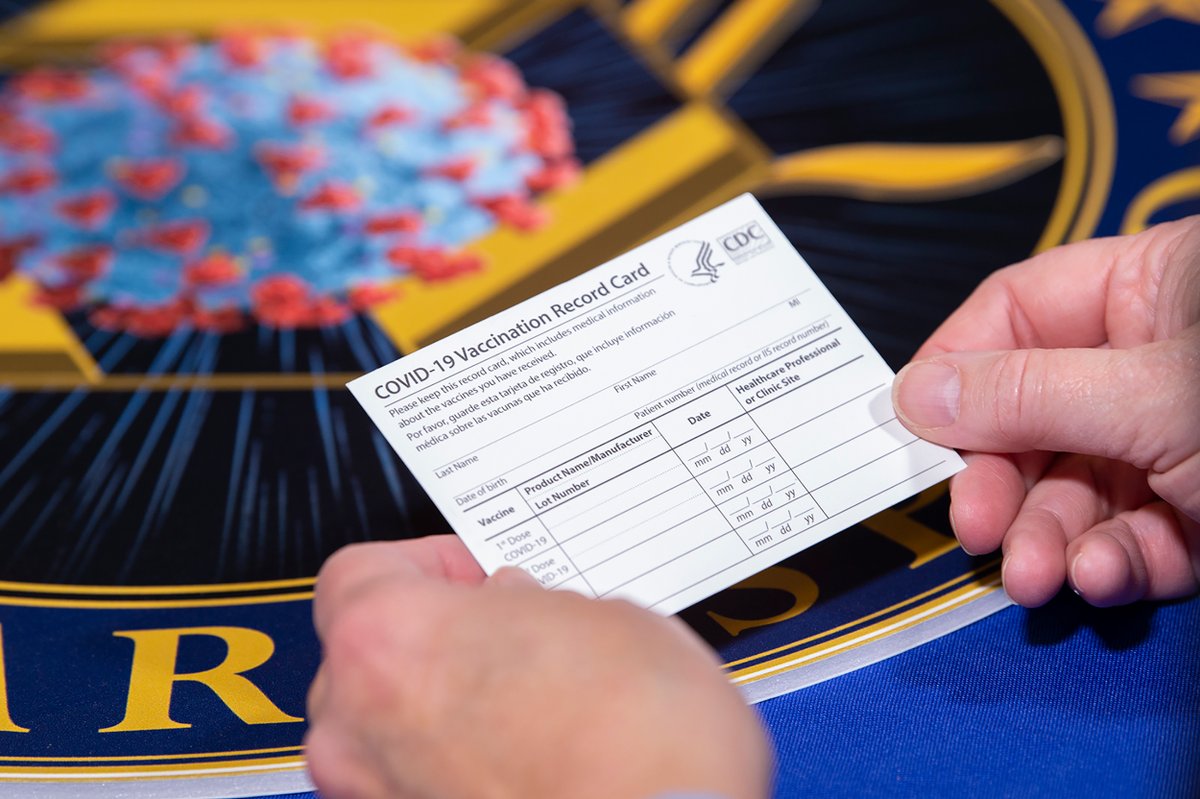 letshearthetruth
@letshearthetru
@techiestudent @State0fCorrupt @YouTube @mggrond @SenatorShaheen @SenatorHassan What else does Bill Shaheen do? He lobbies for Opioids: PainCare. While Senator Jeanne Shaheen gets federal $ to provide treatment for opioid addiction. And the treatment centers get caught in medicaid fraud...kids in NH have been overdosed with prescription drugs under DCYF.
13 Jan, 08:05 PM UTC

🇺🇸
@PrincessNCastle
@SarahUnsicker Go Big and Target Votes: ✅Medical Community, hospitals, etc ✅Everyone currently on Medicaid ✅Think PR nightmare for Them ✅Pro-Life? Whose Life? ✅Investing in the Health of MO Works Use their BS to Your Advantage. Sink their ship in Votes. https://t.co/vOh4b8vv3K
14 Jan, 12:49 AM UTC