Mewis is trending on Twitter. Popular tweets on Mewis.

@CourtneyStith
Can’t believe no Kristie Mewis on the bench to sub in and cause chaos
02 Aug, 09:09 AM UTC

@GrantWahl
HT USWNT 0:0 Canada. No real chances created by either team. Naeher injury hurts in a game that could go to penalties. US midfield seems out of sorts, could use a Sam Mewis addition.
02 Aug, 08:56 AM UTC

🐐
@dashfan08
the usa has never lost an Olympic game kristie mewis has played in and I think vlatko should’ve considered that fact more!
02 Aug, 09:43 AM UTC

Courtney
@glitterunicourt
@USWNT #VlatkoOut Does he even know who the best lineup is? Imagine having Smith, Pugh, or Sullivan as a backup? How do you inherit the best team in the world and lose to Canada. Shitty tactics and shitty use of the players he was given. Mewis and Williams together was a no-brainer.
02 Aug, 09:59 AM UTC

Andy Reynolds
@kareyn09
@MenInBlazers That Vlatko doesn’t have it. A dead-legged Horan starting over Mewis. Never playing Press and Williams at the same time. Refusing to high press from the start of this game. Just awful tactically from the first match.
02 Aug, 10:14 AM UTC

Theo Lloyd-Hughes
@theodore_LH
Don't worry USA. Kristie Mewis is the perfect assertive, ball demanding midfielder with a clinical delivery to help in a game like this. *checks bench* https://t.co/qAtPqD9oSr
02 Aug, 08:56 AM UTC

P
@eton183
@deathntaxesfc Horan shouldn’t have even started. he’s been overworking her and she was so gassed after the last game. mewis and lynn could’ve built off their momentum from the start and we would’ve had a different game. kristie and lindsey should’ve been available off the bench.
02 Aug, 10:27 AM UTC

☆ ☆ All Things Footy ☆ ☆
@alexmoertz
Kristie Mewis horribly misused, Cat Macario a waste of a roster spot, both Midge Purce and Sophia Smith left questionably off, Mal Pugh not called up since January, Sonnett brought but clearly no belief in her from the manager. Disgusting management
02 Aug, 10:19 AM UTC

Bryan Rice
@bricey16
@twbird18 @theAndyMead @Arron008 @JohnDHalloran Development is an issue, but also is it? Like Kristie Mewis and Macario barely played. Midge Purce and Sophia Smith were passed over in favor of aging players who took last year off.
02 Aug, 10:11 AM UTC

Linc
@at_linc
@itsmeglinehan Vlatko has no idea what he's doing. Proof being that K Mewis (who made the original roster) played fewer minute than Williams (an alternate). Credit to Williams, she probably should have been on the original roster, but that's exactly the point. Bad choices from day one.
02 Aug, 10:10 AM UTC

jennifer
@twbird18
@bricey16 @theAndyMead @Arron008 @JohnDHalloran Kristie Mewis is 30 years old. She should have been developed 5 years ago. Much like half our players. For instance when we decided to play Dalkemper over Davidson a few years ago. We do have a development problem. We keep them on the sidelines forever.
02 Aug, 10:17 AM UTC

Van Crisp
@VanCrisp
@JulieFoudy Can you ask Vlatko why he started trash Horan over Sam Mewis? COME ON
02 Aug, 10:35 AM UTC

maggie 🌟
@supportwoso
Why have Kristie Mewis in the original 18 if you’ve barely utilized her? Why bench Macario when she’s the youngest on the team and energy is exactly what was missing from the midfield?
02 Aug, 10:18 AM UTC

La Vic en Rose 💄🌺🌸💗🌹
@vicster
I would have pulled Horan (who had a miserable tournament) and got Sam Mewis in a lot earlier. I mean, it's not like Mewis and Lynn Williams linked up for two goals in the previous game or anything. 🤷🏼‍♀️ https://t.co/A5Ydxl2BE6
02 Aug, 10:11 AM UTC

P
@eton183
@ahawes46 Ertz and Horan is a bad take. Ertz was our most consistent player besides Becky, and Horan was overworked and that’s not on her. Mewis was playing awful for months, and in certain games this tournament doesn’t mean she should be off the team. Neither should Horan.
02 Aug, 11:28 AM UTC

Courtney
@glitterunicourt
@GrantWahl @CCupo What was the logic behind not taking a backup for Ertz? Why didn't he play his best lineup? ...Did Vlatko even know what his best lineup was? Why was Mewis not given the chances that Horan had when she had proven in the past year she was capable of being a game-changer? Just why?
02 Aug, 10:18 AM UTC

@si_soccer
Lynn Williams starts again after her goal and assist vs. the Netherlands, while Megan Rapione, Carli Lloyd and Sam Mewis begin on the bench. Abby Dahlkemper omitted from the matchday squad entirely along with Kristie Mewis, Jane Campbell and Catarina Macario. 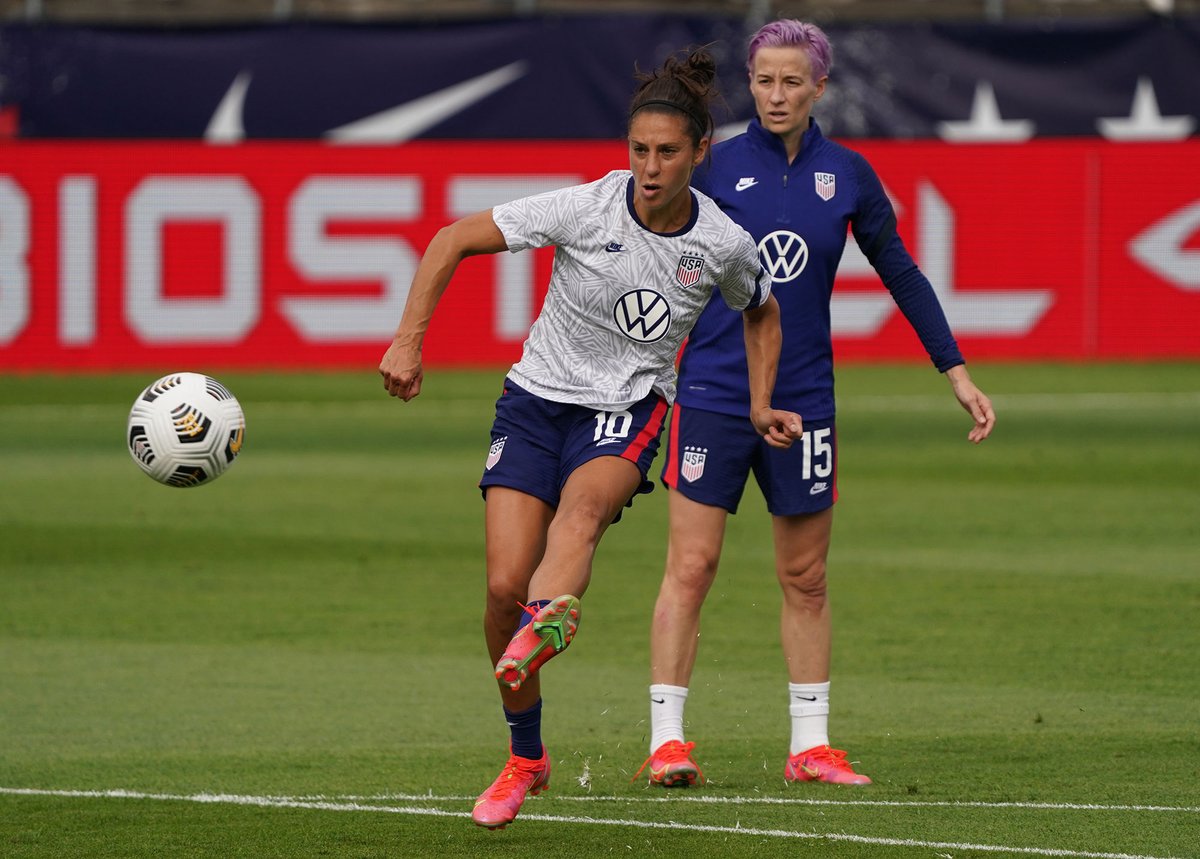 CEO
@ceowens13
@Nettez6 @InkedWrite11 Like for example: he selected Kristie Mewis and then barely played her after giving her a crap ton of minutes the year leading up to this. Poor decision.
02 Aug, 10:29 AM UTC

Arron
@Arron008
@deathntaxesfc Horan looked like she was concusses early in the match he should have subbed S Mewis in then
02 Aug, 10:28 AM UTC

Jon Michael Tupper
@jonmtupper
@socojennedwards @itsmeglinehan The collective team attitude, I think, was influenced by the PR/Media people of USWNT/US Soccer. So many videos. So many starts. Naeher has the character I admire, understated & humble. Sam Mewis despite being in videos is humble too. Just too much PR nonsense.
02 Aug, 10:12 AM UTC

Matthew Bartelson
@mattybstyle_
@alywagner Thank you. I don’t like the block/charge in basketball-and I don’t like this either. What a shame. Next item-Mewis seemed like the best MF’er in the world recently. Why so few minutes?
02 Aug, 10:38 AM UTC

Courtney
@glitterunicourt
@alywagner Lots of game plans that didn't make any sense. No rest for Ertz and Dunn for most of the tournament. The combination subs did nothing but cancel out each other's strengths. Seriously why not Williams and Mewis together to start? Why not Press with Williams?
02 Aug, 10:36 AM UTC

Reed McLaughlin
@Ireland_US
@karla28_ @mercash22 @ironcity1176 People keep naming these players for example but I really don't think they would have been any better. Maybe Midge but we weren't terrible on the wing... Most of the problems were midfield... Like why Horan consistently over Mewis I'll never understand
02 Aug, 10:30 AM UTC

Jon Michael Tupper
@jonmtupper
@NoSurrender_87 @socojennedwards @itsmeglinehan Also Sam Mewis had no room to move w/so many stars in the front line. Vlatko did not design an offense that game her a real chance. Gareth Taylor at Man City did. Sam scored 16 goals in 32 games. She could not play her game for this team. We suffered thereof.
02 Aug, 10:29 AM UTC

Allyson Bento
@NoSurrender_87
@at_linc @itsmeglinehan Should have been Mewis that started WITH Lynn. You know, the players that play together all season. With Dunn an old teammate in the back. Subbing Lloyd in who can’t track back or transition anymore? Two golds stolen by coaching. It’s like he drew the lineup out of a hat.
02 Aug, 10:20 AM UTC

Jon Michael Tupper
@jonmtupper
@USoccerBufBills @itsmeglinehan that's going to be a crushing challenge for Tierna to overcome. Like Press missing her PK in 2016. I hope they can hang out together now.....Why Press & Sam Mewis not start?
02 Aug, 10:14 AM UTC

P
@eton183
@glitterunicourt I disagree with some of Jill’s decisions but her experimentation led to Ertz as a defensive mid, Lavelle and Mewis as starters, and the controversial Dunn as left back, but all of those things were absolutely instrumental in our success in 2019.
02 Aug, 10:50 AM UTC

Kat
@Kat720519
@claresugarland @AdrianaHoop I think k mewis would had being a much needed fresh air and she would be hungry enough to give us a little creativity, why bring her and not use her? Why not bring Lynn n then use her a lot? Like his decision L’s makes no sense at all.
02 Aug, 10:50 AM UTC