Andrew Lawrence
@ndrew_lawrence
Republican senator Mike Lee blasts the Trump administrations post-Iran briefing, says they were told they could not dissent from Trump, couldn't debate it, and if Trump needed justification to go to war "I'm sure we could think of something" 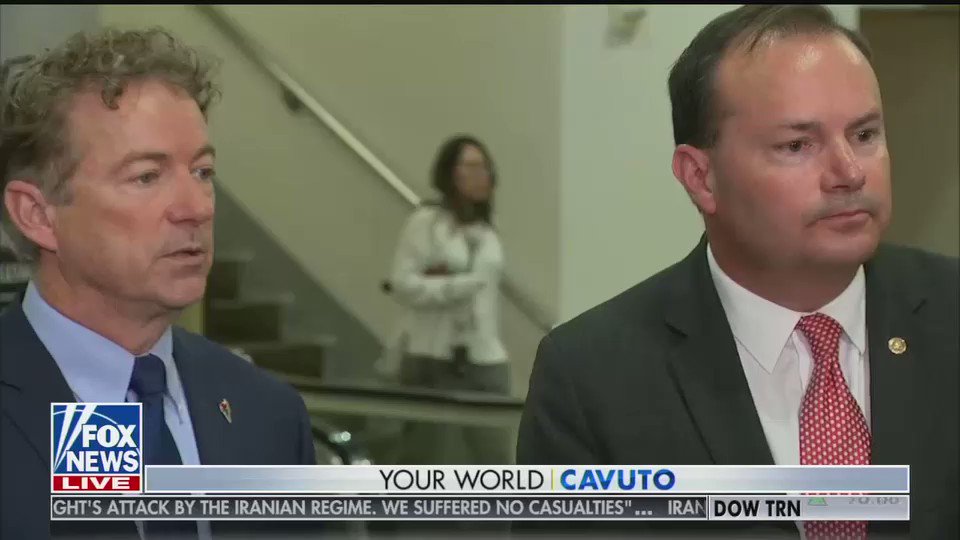 @atrupar
Fox News cut away from Republican Sen. Mike Lee as he excoriated the Trump admin’s Soleimani briefing as “probably the worst briefing at least on a military issue I’ve seen.” 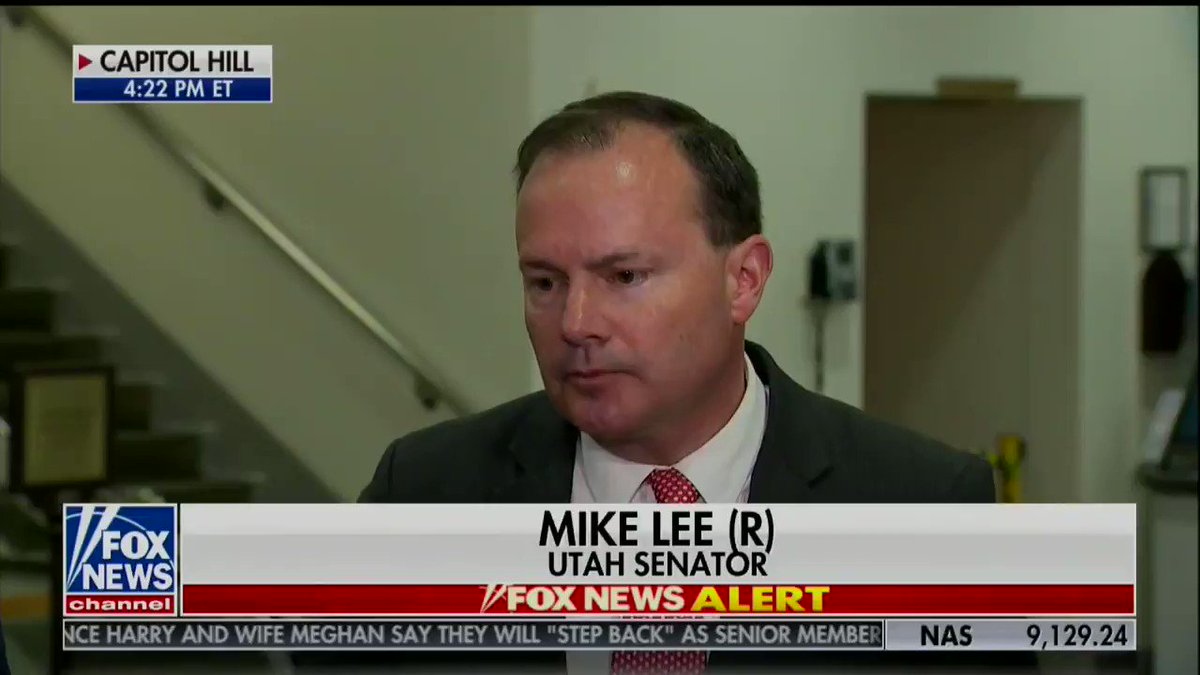 @kylegriffin1
GOP Sen. Mike Lee goes off on the Trump briefing: "They had to leave after 75 minutes, while they’re in the process of telling us that we need to be good little boys and girls and run along and not debate this in public. I find that absolutely insane. I think it’s unacceptable." 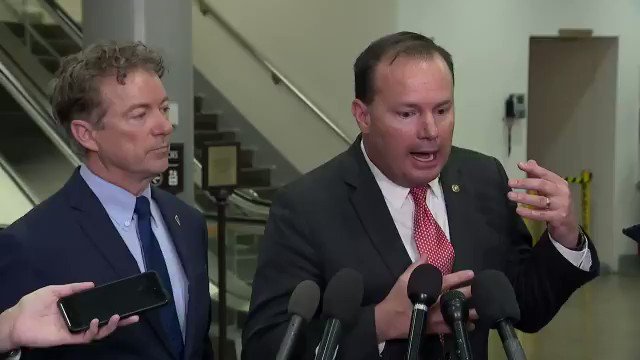 @mkraju
GOP Sen. Mike Lee railing on the Iran briefing just now from senior administration officials, calling it “the worst briefing I’ve had on a military issue in my nine years” in the Senate
08 Jan, 09:23 PM UTC

@kathrynw5
Wow, Mike Lee is ANGRY. "It's un-American, it's unconstitutional, and it's wrong," Lee says after noting briefers said senators couldn't debate the merits of the strike Says he was undecided on Kaine's war powers resolution, but now he supports it.
08 Jan, 09:26 PM UTC

@grantstern
Fox News just aired a major crack in Trump's red wall in the Senate! Senator Mike Lee called it the worst briefing he's ever seen on military matters and is very upset it's classified so can't be publicly debated. Fox cut away from him.

Acyn Torabi
@Acyn
The Mike Lee comments are amazing because they make every other Republican who came out of the briefing praising it look like sycophantic morons
08 Jan, 09:43 PM UTC

@igorbobic
A ticked off Mike Lee says the Iran briefing was so bad it changed his mind on Kaine’s war powers resolution, and now he’s going to support it
08 Jan, 09:25 PM UTC

Joshua Potash
@JoshuaPotash
Wow. Fox just aired Republican Senator Mike Lee ripping into the briefing that he just received on Iran. He calls the idea that Trump’s approach should not be debated “absolutely insane.” 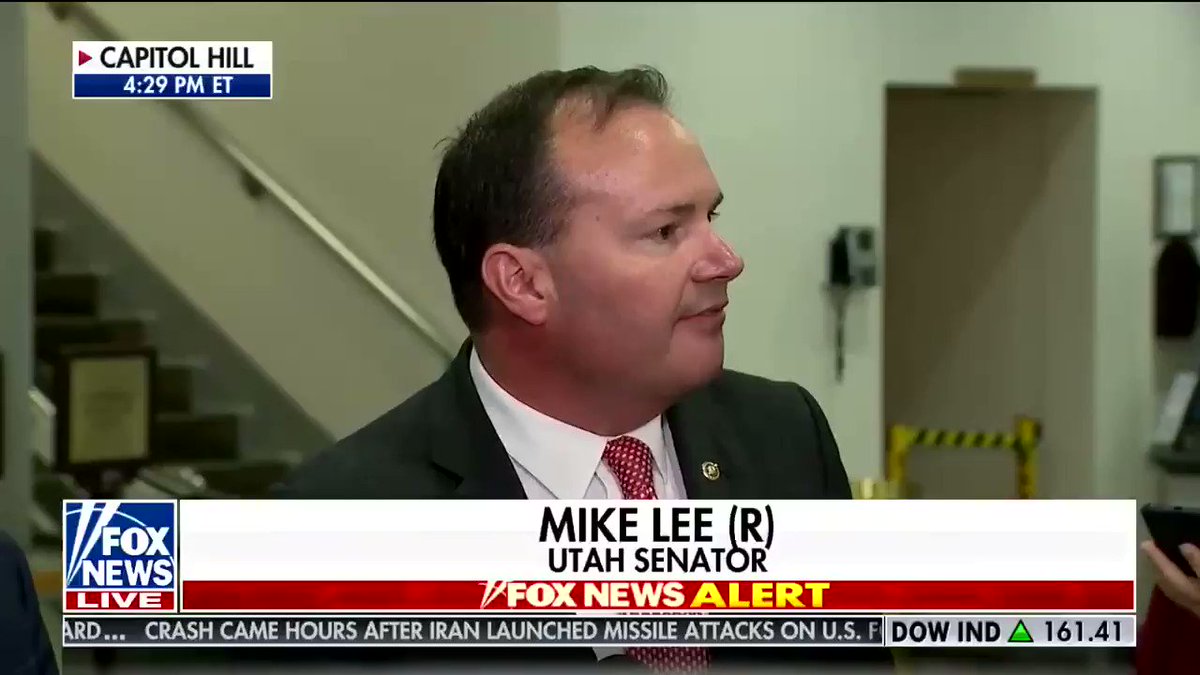 @RepJayapal
Racist tropes are beneath members of Congress. It shouldn’t have to be said, but here we are. BTW: You should talk to Sens. Mike Lee & Rand Paul. Here are some words they used to describe the same briefing: “wrong,” “insulting,” “insane,” “unacceptable,” & “upsetting.” https://t.co/kmSqOMuPwx
09 Jan, 02:28 AM UTC 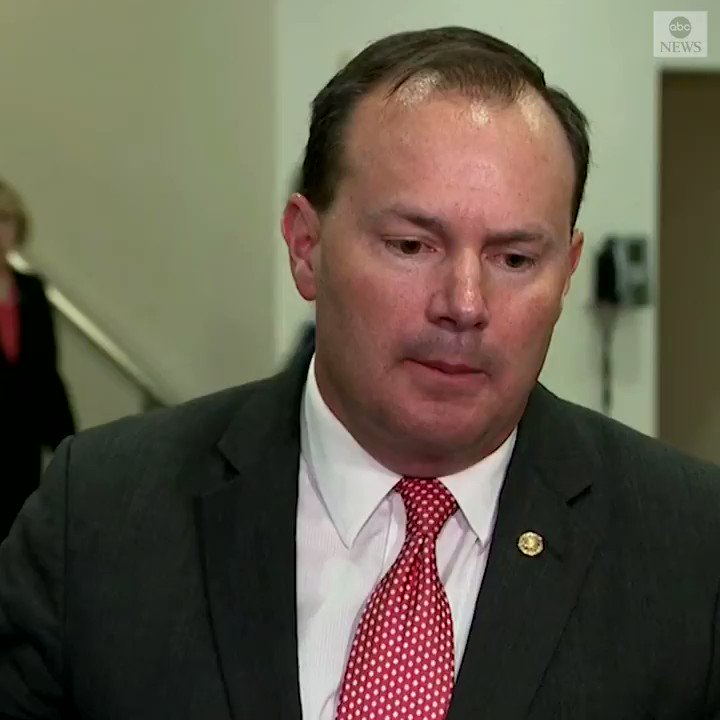 Acyn Torabi
@Acyn
Senator Mike Lee appears on Fox News and is not backing down from his statements from earlier today. He says he is concerned with the “flipping” attitude reflected in the briefings 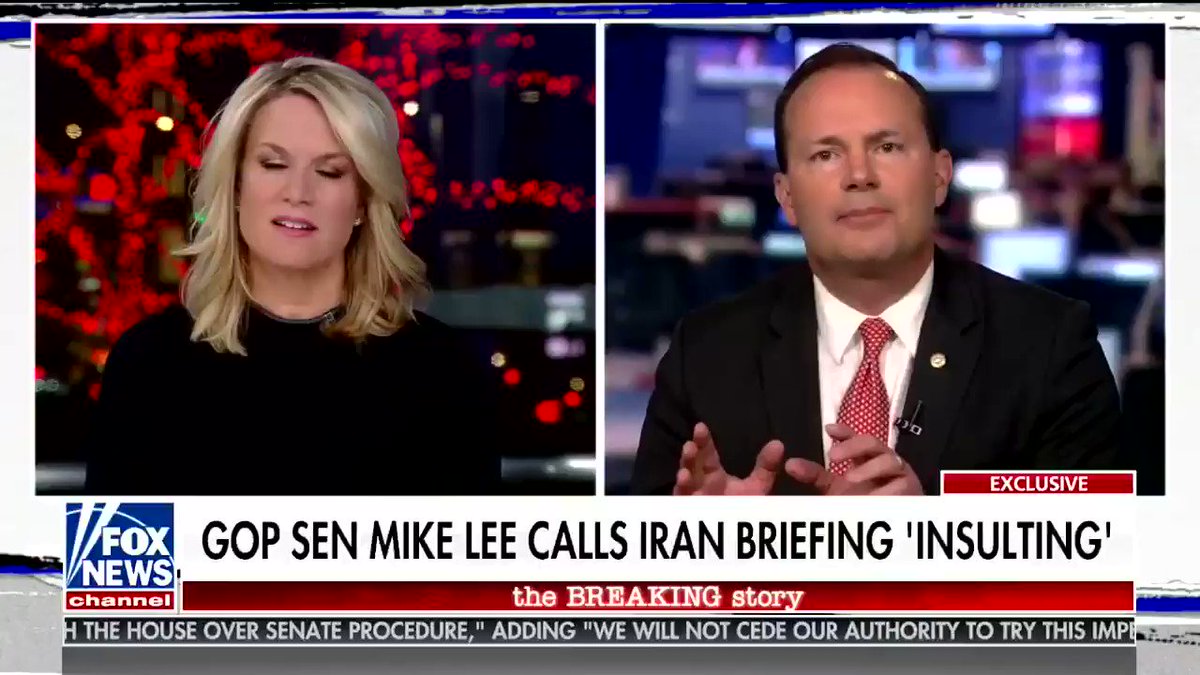 @atrupar
MIKE LEE calls Soleimani briefing “worst I've seen, at least on a military issue, in 9 years I've served in the Senate,” adds: “What I found so distressing is one of the messages was do not discuss, do not debate appropriateness of further military intervention against Iran.” 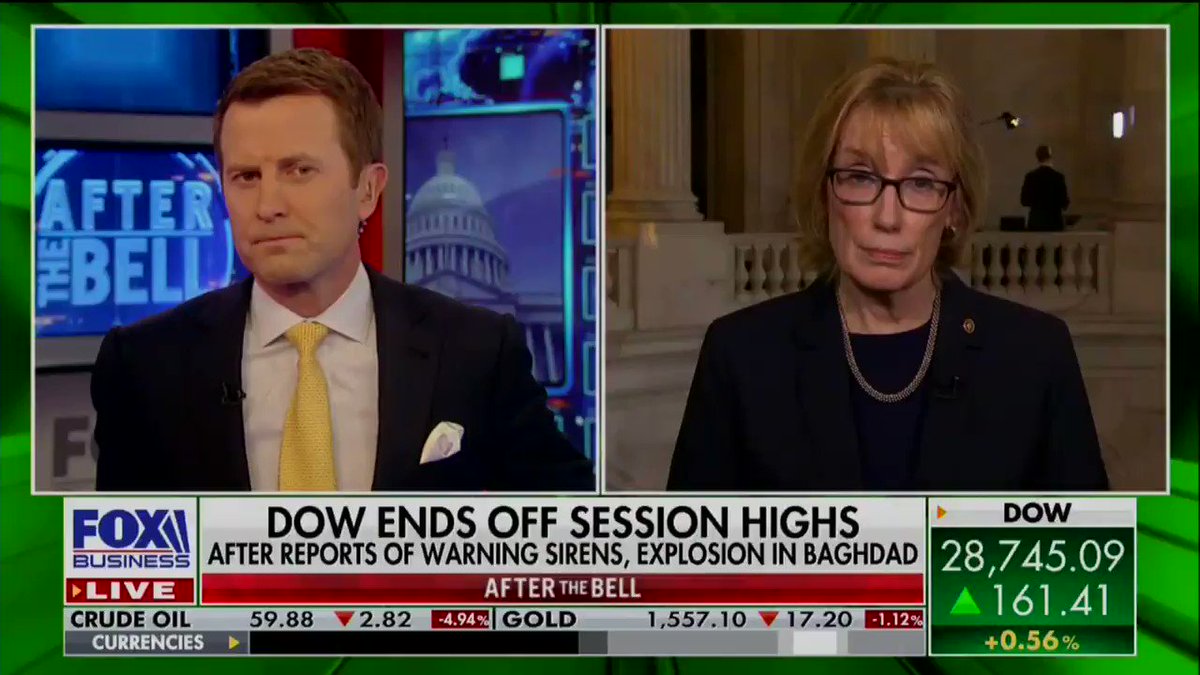 @JackPosobiec
Be nice if someday Mike Lee could get that fired up about serving the American people
09 Jan, 01:17 AM UTC

Matt Couch 🎙
@RealMattCouch
I just watched Mike Lee saying that we needed to Justify killing an Iranian General responsible for the killing over over 600 American Soldiers.. That doesn't include all of those missing limbs, and with injuries for life. You should call their families Senator..
08 Jan, 09:34 PM UTC

@ElieNYC
I'm gonna skip the part where we're praising Mike Lee until Mike Lee actually votes against the President on, let's put the O/U at like ONE goddamn thing.
08 Jan, 11:26 PM UTC

@JoyceWhiteVance
Mike Lee is a Tea Party conservative from Utah. He criticizes one act by the administration & Trump's lap dogs jump all over him. Because, it's a cult of personality. It's not about American & never has been. It's about Trump & holding power (& profit). https://t.co/4KRvWqdqhf
09 Jan, 04:52 AM UTC

@burgessev
Here's some more spicy Mike Lee: "One of the messages that we received from the briefers was: Do not debate, do not discuss the issue of appropriateness of further military intervention against Iran. And that if you do you'll be emboldening Iran"
08 Jan, 09:38 PM UTC

Matt Couch 🎙
@RealMattCouch
If only Senator Mike Lee had of thrown a toddler like tantrum when Obama ordered 563 Drone Strikes during his Presidency... But he didn’t... The Swamp is going to Swamp.. #Trump2020
09 Jan, 03:06 AM UTC

@ilyseh
This is racist pure and simple. Unacceptable coming from a child and certainly a member of Congress. It’s designed to foment hate against @RepJayapal. He kept his mouth shut when Mike Lee said the same. https://t.co/U9qjSx19s1
09 Jan, 01:46 AM UTC

@Elex_Michaelson
.@tedlieu: "I agree with Republican Senators Rand Paul and Mike Lee that the Trump Administration's actions were unconstitutional!" He says we are "less safe now than we were a week ago." "I still have not gotten sufficient evidence for the killing of Soleimani..." @FOXLA 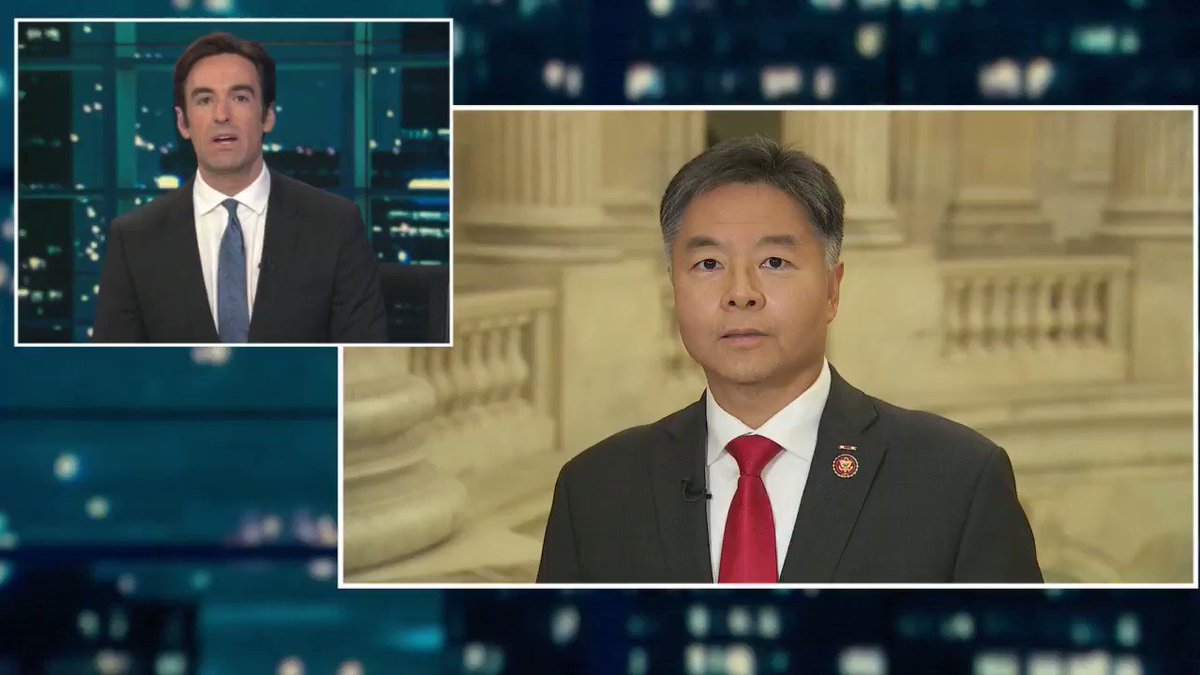 Marine03
@feingold32
Mike Lee Voted against Border Wall Funding, Hurricane Relief funds for Texas, and to keep Obamacare alive..Why is anyone surprised he took a shot at Trump using Democrat talking points, when he sides with Dems on every Major issue...Utah has a RINO problem they need to deal with!
09 Jan, 02:46 AM UTC

@11thHour
An incensed Sen. Mike Lee (R-UT) after being briefed on the intelligence used to justify Trump's strike on Soleimani: "... the worst briefing I've seen, at least on a military issue, in the nine years I've served in the United States Senate." Learn more: https://t.co/URXlXt94HO 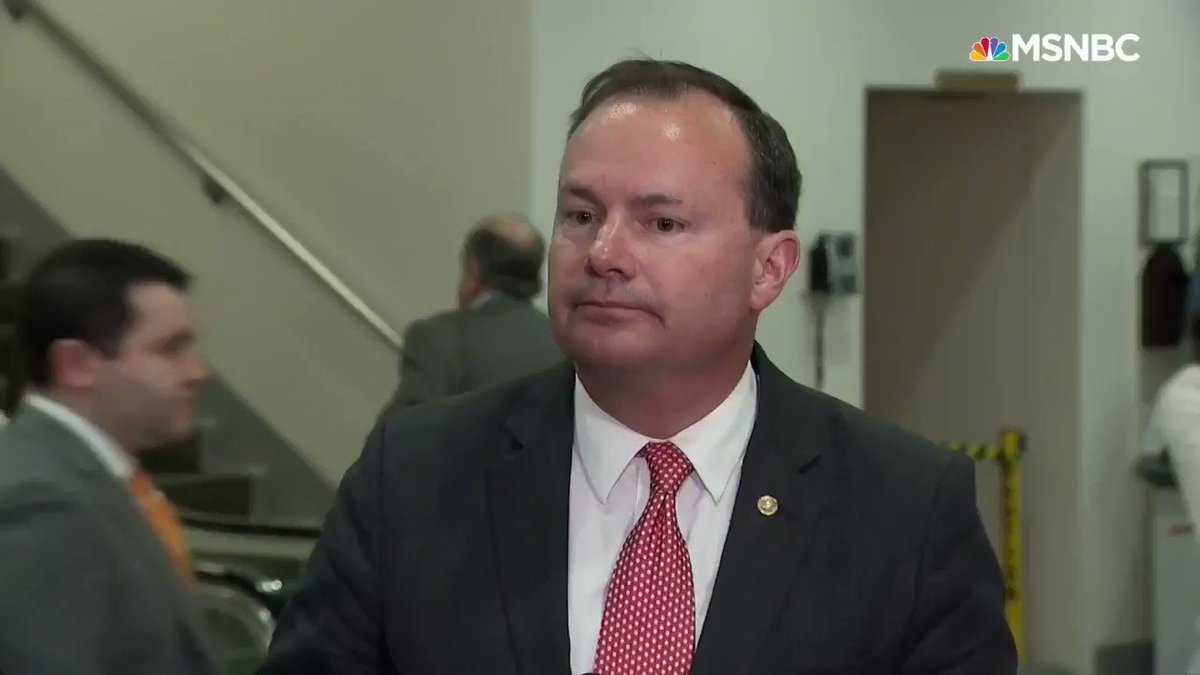 PoliticusUSA
@politicususa
Fox News cut Sen. Mike Lee (R-UT) as he was ripping Trump and his administration a new one for the worst briefing that he has ever had. Here is a longer clip. 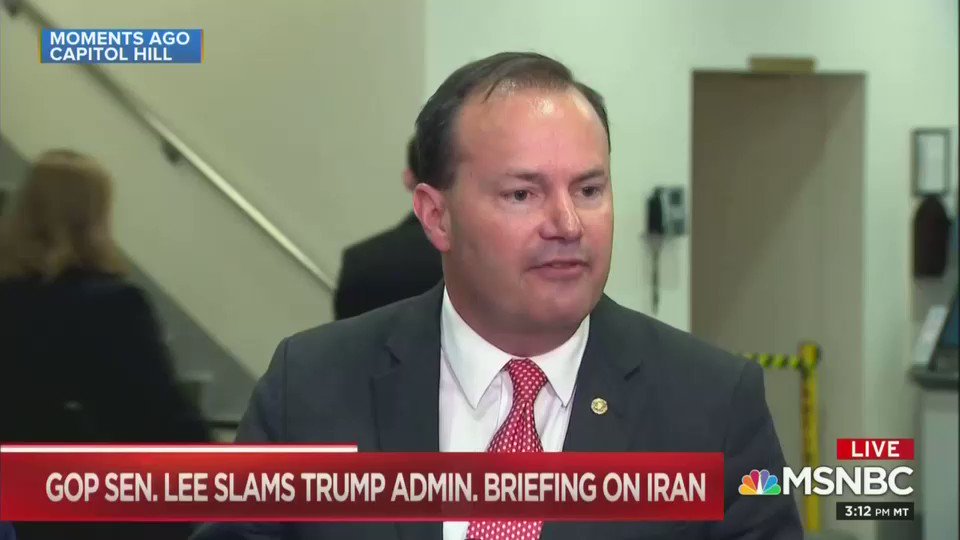 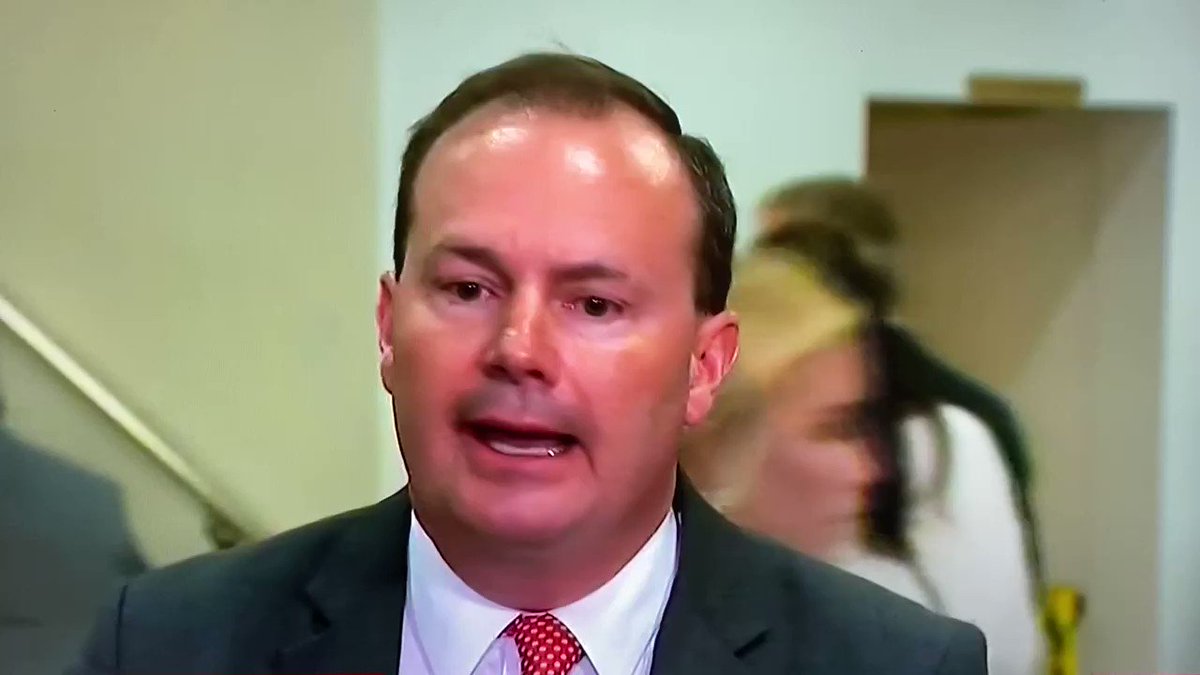