@RepRaskin
Condolences & love to the beautiful family of Mike Miller, who we lost today after his long fight with cancer. As I worked with him in the Senate for 10 years, Mike taught me about Maryland history, parliamentary procedure & how to grow as a leader. He made me laugh every day. https://t.co/6dgiZR3rPh
15 Jan, 11:21 PM UTC

@GovLarryHogan
Maryland has lost one of its most revered leaders, and I have lost a dear lifelong friend. My full statement on the passing of Senate President Emeritus Mike Miller: 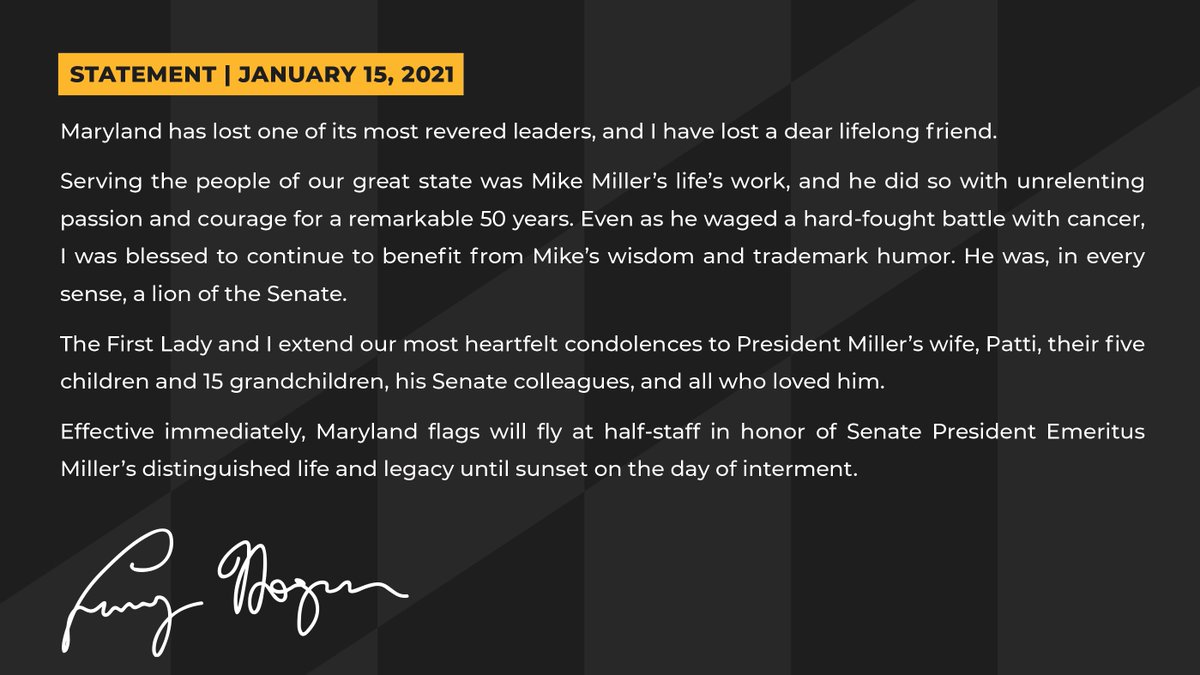 @MichaelSteele
My condolences and prayers to the family of Thomas V. Mike Miller Jr., #Maryland's State Senate president. Mike was an incredible public servant and I enjoyed my years working with him as Lt. Governor. Rest now, my friend. https://t.co/O3FVmjDxjk
15 Jan, 11:38 PM UTC

@MayorBMScott
I join Baltimoreans in mourning the passing of Senate President Emeritus Mike Miller. He was a giant of Maryland Democratic politics, who will be missed by all who he mentored. My thoughts and prayers are with his family during this difficult time.
15 Jan, 11:13 PM UTC

@ChrisVanHollen
Maryland lost a giant and I have lost a dear friend. Governors have come and gone, but Mike Miller was a historic figure and force of nature pushing Maryland forward. His legacy of results for our state is unmatched. Katherine and I send our love to Patty and his family.
15 Jan, 10:51 PM UTC 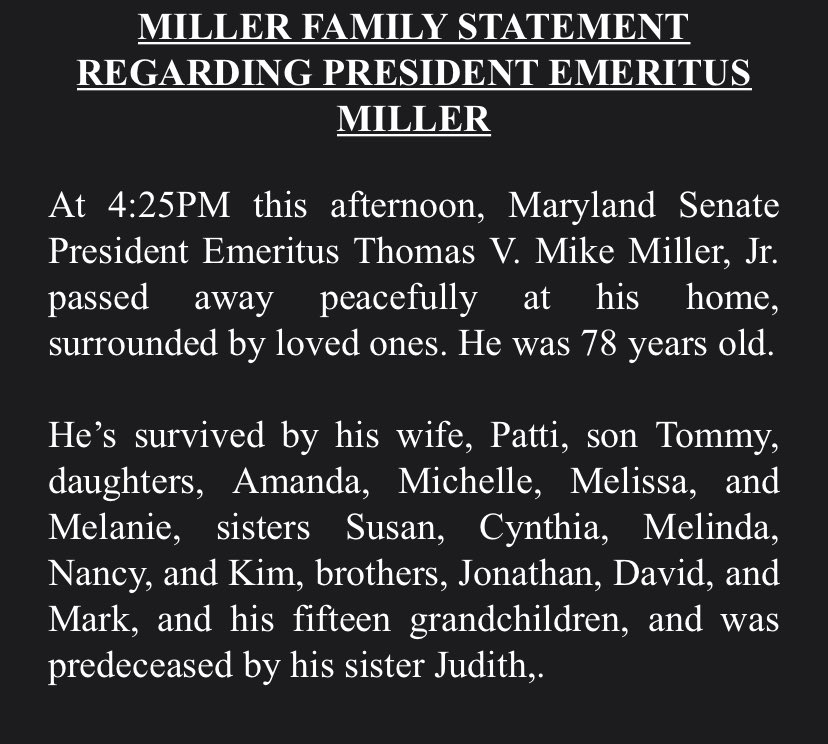 @SpeakerAJones
I am deeply saddened to hear of the loss of my friend, colleague and trusted advisor Senator Thomas V. Mike Miller Jr. Mike Miller was a giant and a legend who served the people of Maryland for nearly a half century.
15 Jan, 10:28 PM UTC 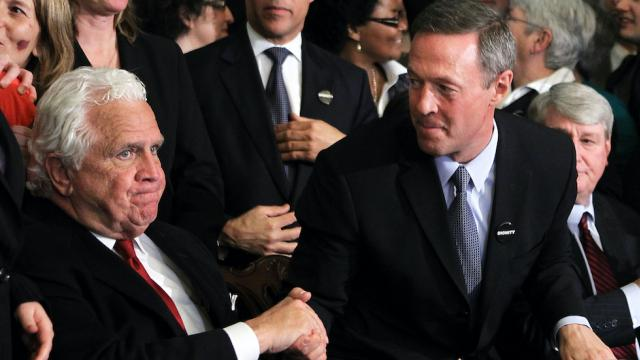 @SenatorCardin
Mike Miller was larger than life, a good friend, a good man who loved his family and community, and an incredible public servant who dedicated himself to his beloved Maryland. Our hearts ache for Patti and his family at this immensely difficult time. May his memory be a blessing.
15 Jan, 11:22 PM UTC

Dr. Darryll J. Pines
@President_Pines
Senator Thomas V. Mike Miller has been a giant among those who have built our flagship and propelled Maryland to a top public research institution.  This photo of presidents and Senator Miller illustrates his decades-long commitment to UMD and higher education in our state. https://t.co/5N0EwzWhji
15 Jan, 11:30 PM UTC

@pwoodreporter
Thomas V. Mike Miller, the longtime president of the Maryland Senate, died Friday afternoon. His family says he "passed away peacefully at his home, surrounded by loved ones." https://t.co/zW7PqSgrNO
15 Jan, 10:19 PM UTC

@LeaderHoyer
I’m deeply saddened by the passing of my dear friend Sen. Mike Miller - a giant in the MD Senate and a champion for working families. My prayers are with his wife Patti and the entire Miller family. https://t.co/FLnvO45Hp0
16 Jan, 12:07 AM UTC

County Executive Angela Alsobrooks
@CEXAlsobrooks
Our hearts are heavy as we mourn the loss of a true leader, Senator Mike Miller. For nearly 50 years, Senator Miller devoted his life to public service and was a lifelong champion for the people of Maryland. (1/3) https://t.co/ewR7IVYKoc
15 Jan, 11:48 PM UTC

Michael Hough
@senatorhough
Mike Miller was a true giant in the history of the State of MD and a master of the State Senate. Today, I grieve with my colleagues over his passing and will work this Session in remembrance of him for the history and tradition that he passed on to us who are Senators.
15 Jan, 11:16 PM UTC

Calvin Ball
@HoCoGovExec
For a half century, Senate President Mike Miller made Maryland one of the strongest states in our nation. His legacy will live on for generations. As Presiding Officer of the Senate for more than 30 years, he was a steadfast leader, a mentor and a friend to many. https://t.co/gmdYPHE7Cf
15 Jan, 11:11 PM UTC

@TraceeWilkins
Maryland Senate President Emeritus Thomas V. Mike Miller, Jr. has died according to a statement from his family. He passed away peacefully at his home, surrounded by loved ones. He was 78 years old. 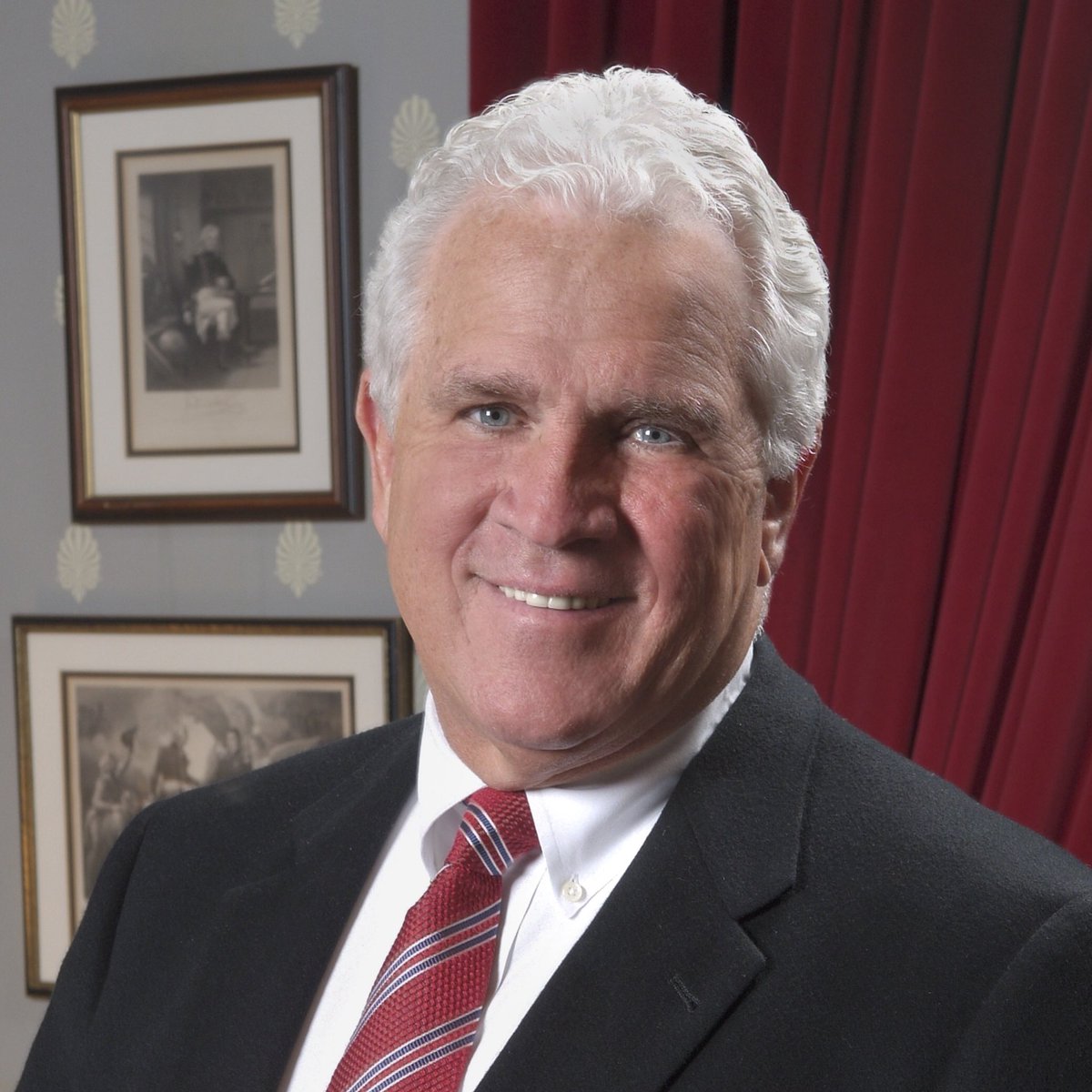 @brynstole
Gov. Larry Hogan orders Maryland flags flown at half-mast to mark death of Thomas V. Mike Miller Jr.: “Maryland has lost one of its most revered leaders, and I have lost a dear lifelong friend.”

@DLCC
Mike Miller was a leader in Democratic politics--the longest-serving state senate president in the country & the former board chair of the DLCC. Marylanders for decades to come can be proud of the progress he achieved. Our hearts are with his family. https://t.co/28T5DkTNCc
16 Jan, 12:08 AM UTC

@RepDavidTrone
Senator Miller dedicated his life to serving the people of Maryland, and his impact will be felt throughout our state for generations to come. He will be greatly missed. https://t.co/14jT2eq3Mu
15 Jan, 11:54 PM UTC

@LukeClippinger
Sending my sincerest condolences to the Miller family. Mike Miller was a one-of-a-kind leader, and the State of Maryland owes him and his family a great debt.
15 Jan, 11:55 PM UTC

@DickSaslaw
This evening, we mourn the loss of Thomas V. Mike Miller Jr., a giant of the Maryland General Assembly. Mike was a great legislator that dedicated himself to his constituents and to good government. Rest in peace, my friend.
15 Jan, 11:51 PM UTC

County Executive Angela Alsobrooks
@CEXAlsobrooks
He served as President of the Maryland Senate for more than 30 years, making him the longest-serving Senate President in the history of the United States as well as the State of Maryland. We have all benefited from Senator Mike Miller’s leadership, influence and guidance,...(2/3)
15 Jan, 11:48 PM UTC